Readers of EatDrinkFilms and friends can save 10% off the Festival Pass and Pass Plus using the special code EATDRINKFILM!

The San Francisco Bay Area is home to nearly 100 film festivals each year, certainly a world record. The first film festival in the Americas was created by Irma and Irving Levin when they returned from the Venice Film Festival inspired to show a selection of new Italian movies in San Francisco. The response was overwhelming and the next year they expanded to offer an international selection. Thus, in 1957 The San Francisco International Film Festival was born, launching an inexhaustible passion for locals to explore the world of the movies.

We have film festivals that celebrate cinema from countries on nearly every continent and practically every subject. For me a festival’s success is a combination of the quality of the movies shown and the environment that is created for festival attendees, both audiences and filmmakers. I’d rather see a terrific movie that is new to me than a mediocre World Premiere.

I was born and raised in Napa, and as teens in this culturally starved town of the early 1960s, my friends and I decided to do something about it and started the Above-the-Ground Theatre in the hayloft of the family barn. We produced plays, music concerts, seminars, zines and lectures, but mostly made and showed movies. The ambitious screenings brought hundreds of films from around the world spanning the history of cinema, with each feature accompanied by shorts, an introduction and program notes.

Napa has come a long way, as the Valley is now rich with the arts. But until a few years ago the cinema scene was sorely lacking. A single commercial complex ignored foreign and independent films, so people traveled to the wonderful Sebastiani Theatre in Sonoma, while the Cameo in St. Helena also mixed in a few art films.

Brenda and Marc Lhormer had run the Sonoma Film Festival and produced the successful feature Bottle Shock  when they decided it was time for the Napa Valley to have its own film festival. As wine country residents, they understood there were riches to be shared by bringing films, food and wine tours together. This marks the fourth year, and the event has grown into a popular annual celebration of all these pleasures, for both locals and visitors.

A true celebration, the Napa Valley Film Festival offers movies, good eats and libations throughout the Valley with events in the towns of Napa, Yountville, St. Helena and Calistoga at the most colorful time of year.

From November 12-16, visiting filmmakers and celebrities will interact with audiences at the some 125 film screenings and intimate events in 14 unique screening venues throughout the four “walkable villages” (as the festival directors have dubbed each town). There are also intriguing film panels, culinary demonstrations, afternoon wine tasting pavilions, the Festival Gala, Celebrity Tributes, Awards Ceremony, and an array of parties, VIP receptions, Vintner Circle dinners and more. For a schedule of events at the Culinary Stage click here. For Wine Pavilion events and tastings, click here.

The festival uses a mixture of existing auditoriums and creatively imagined screening venues. Surely the jewel is the Uptown Theatre, the very movie palace where I saw 4 movies a week growing up. After being closed for many years it was stunningly restored from its beautiful neon tower to the detailed décor inside and is now a popular concert hall that welcomes the film festival for special events. Do not hesitate to experience a show there.

WHAT SHOULD YOU SEE?

There are many food and wine options to consider as you look through the Festival Guide (pocket size) or this sneak preview of the complete Program Book with updated information.. You can also visit numerous terrific restaurants and wineries between the movies and related events.

The Imitation Game  is one of my favorite films of the year, and is an appropriate opening night movie, with its terrific performance by Benedict Cumberbatch as Alan Turing. He’s beautifully supported by Keira Knightley in one of her best parts. This is headed for big things come awards season.

East Side Sushi  is a feel-good (in the best way) movie about a young Latina who wants to be a sushi chef against the odds. The film shows off Oakland in the best ways and the food being made will certainly leave you hungry, but beyond these aspects, writer/director Anthony Lucero has created a movie that satisfies on all fronts, with a winning performance by Diana Elizabeth Torres. 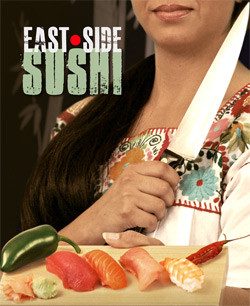 An Honest Liar is full of surprises as it follows the famous magician James “The Amazing” Randi debunking faith healers, psychics and other con artists. His passion is almost frightening, and then we find out about unexpected secrets in his own life. Interviews with Adam Savage (MythBusters), Alice Cooper, Penn & Teller, and Bill Nye offer some celebrity to the film, but Randi is the focus. He is scheduled to appear at the showings.

Escobar: Paradise Lost is a combination of art film and action thriller about a young Canadian surfer who finds himself involved with a beautiful woman in Columbia. When he asks who funds her humanitarian work she casually mentions her uncle Pablo Escobar (frighteningly well-played by Benicio Del Toro), the drug lord. What happens next will keep you on the edge of your seat.

Actor/comedian Mike Myers has added “director” to his bio with the highly entertaining Supermensch , which came through San Francisco during the summer but was missed by many. It is an appropriate film for this festival, as it focus on celebrity cultures, from film to food. With Myers and super agent Shep Gordon expected to appear, this should be a lot of fun.

Compared To What: The Improbable Journey of Barney Frank is an intimate look at the life of the first openly gay congressman as he talks about both his personal and public lives from realizing he was gay at thirteen, assuming a political career was not possible; his surprise 52 percent of the vote election to the U.S. House of Representatives using the campaign slogan “Neatness Isn’t Everything”; being deeply closeted until a colleague outed him in a book; and the successful political career that followed, balanced by a relationship with his husband, who has mellowed Frank. One-time Bay Area filmmakers Sheila Canavan and Michael Chandler have made a memorable portrait.

Havana Curveball is unusual in that it started out as an instructional video and became the story of a 13-year-old Giants fan and ball player who collects baseball equipment to send to poor children in Cuba as his bar mitzvah project. After the post office refuses to send the gear, he and his parents (the filmmakers) have to figure out how else to make his dream come true, eventually leading to a trip to Havana, with intriguing revelations along the way.

Like Sunday, Like Rain is the surprising fourth feature directed by actor Frank Whaley about a 12-year-old cello prodigy and a struggling twenty-three-year old musician hired as his au pair. She is on the rebound from a breakup, and they both need a friend. As they share ideas and music, the relationship is nicely handled. The story is simple and the film isn’t perfect, but it’s definitely worth seeing, especially with Whaley expected to attend.

States of Grace powerfully offers the story of Dr. Grace Dammann, whose life was nearly cut short when a car crashed head-on with hers on the Golden Gate Bridge. The physician and co-founder of the first HIV/AIDS clinic for the poor was in a coma for seven weeks, undergoing numerous surgeries, when she suddenly awoke with all of her cognitive abilities but severe physical disabilities. She fights her way back to her career and new challenges to inspire us all.

Animation is a favorite genre of mine and there are three highlights to check out:

Cheatin’ is veteran animator Bill Plympton’s best feature in a career filled with highlights and awards. His hand-drawn style makes him that rare artist who has not gone to computer graphics. Newlyweds find their romance is challenged, they move apart, and the most unusual series of sexual encounters ensue. Plympton’s freewheeling visual style is showcased in this adult’s-only movie. The director will be in attendance and if his past appearances are an indication, you could come home with an original, signed drawing. Don’t be afraid to ask. 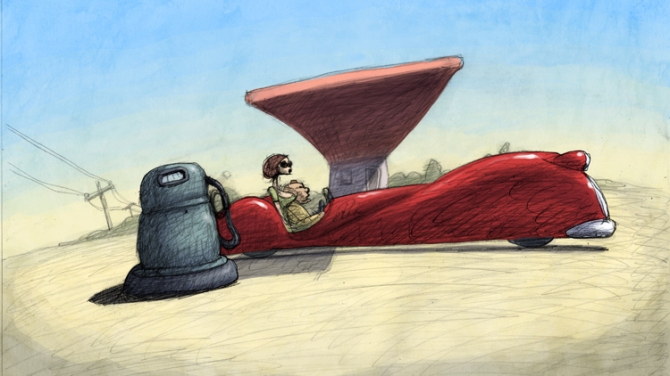 Family friendly animation is featured in two Disney-related programs. For a very early sneak preview of the newest Pixar short, don’t miss master animator and storyteller Jim Murphy as he presents Lava . He’ll offer a fascinating and funny illustrated look into the history of the project that provides insight into his world of creativity and the twists of the film business. Expect some musical surprises too.

Finally, The Tunes Behind the Toons is a wonderful half-hour documentary about the importance of music in animation. Though a Disney production, it includes work from many other studios including Warner Brothers and the Fleischer Brothers, spanning cartoon history from the first sound cartoons to the latest CGI features.

There are several other programs of short films, including one focusing on animation for sophisticated audiences.

Intriguing films I have not seen but am curious to view include The Last 5 Years , a musical featuring Anna Kendrick and Jeremy Jordan. Closing Night—Sunday, November 16—features actor and director James Keach presenting his moving portrait Glen Campbell: I’ll Be Me  at the Uptown Theatre, the venue for Campbell’s final triumphant performance as he struggled with Alzheimer’s.  A Beautiful F—–ing Experience is a documentary about the Flaming Lips’ attempt to break a world record, performing eight concerts in eight cities in 24 hours. The mockumentary Teacher of the Year could be anything, but I like Keegan-Michael Key of Comedy Central’s Key and Peele, so why not check it out.

There are many discoveries to be found as you look through the program guide. During the next few days I will be making selections based on a number of factors. Sometimes you can find reviews from other festivals. A movie’s website or Facebook page, usually featuring a trailer and background about the film and its creative team can offer insight to help choose wisely.

Kevin Costner will be the guest of honor at the Gala Screening of Mike Binder’s Black and White followed by a Q&A on Thursday, November 13, and he receives the Visionary Filmmaker Award presented by Beaulieu Vineyards at the Celebrity Tribute Program on Friday, November 14. That event also honors Michelle Monaghan and rising star Jeremy Jordan.

This three-and-a-half minute promotional short will give you a taste of the festival, with coverage from past years:

Save 10% off the Festival Pass and Pass Plus using special code EATDRINKFILM!

You can download a PDF of the NVFF Mini Guide here.

Gary Meyer co-founded Landmark Theatres in 1975, the first national arthouse chain in the U.S. focused on creative marketing strategies to build loyal audiences for non-Hollywood fare. After selling Landmark, he consulted on projects for Sundance Cinemas and the Brooklyn Academy of Music’s Rose Cinemas, created the Dockers Classically Independent Film Festival and Tube Film Festival for the X Games, and resurrected the 1926 Balboa Theatre in San Francisco. Meyer joined the Telluride Film Festival in 1998, becoming a Festival Co-Director in 2007. Now a senior curator at Telluride, Meyer also founded the online magazine, EatDrinkFilms.com in 2014, with the EatDrinkFilms Festival to tour nationally in 2015.