Editor’s note: It is timely that veteran film distributor and film lover Gary Palmucci has written a review for us of Ben Davis’ new book  Repertory Movies Theatres of New York City: Havens for Revivals, Indies and the Avant-Garde, 1960–1994 (McFarland 2017) 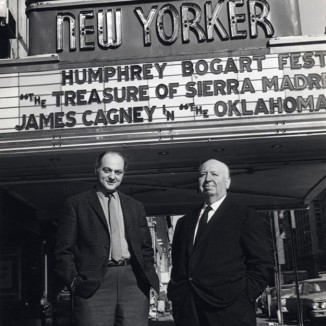 The last week of December 2017 saw the passing of one of the giants in art film distribution and exhibition, Dan Talbot.  In March, 1960 Dan and Toby Talbot took over the rundown –but with great decor– Yorktown Theater on New York’s Upper West Side and renamed it the New Yorker, reusing the “York” portion of the neon and starting a policy of repertory cinema mixing classics and more recent films in eclectic double features.  The Talbots operated the New Yorker until 1973, often at a loss but with some surprise hits.

“The theater had a policy of no policy,” Toby Talbot wrote in The New Yorker Theater and Other Scenes From a Life at the Movies. “We thought of it as our living room, playing movies we wanted to see on the screen.”” I’ll play new films, old films, foreign films, American films—whatever I think merits being shown.” Dan said. “And if the audience agreed with me, great. If they didn’t, too bad.”

END_OF_DOCUMENT_TOKEN_TO_BE_REPLACED 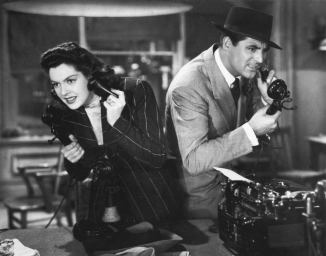 Cary Grant and Rosalind Russell in His Girl Friday, 1940.

The newspaperman – the cliché is that anyone working for a paper is a rogue and a joker, a cross between hero and raconteur, and possibly drunk at that. It’s the kind of character made famous by The Front Page (1931) and His Girl Friday (1940), and usually played by someone as charming and suave, as Adolph Menjou or Cary Grant.

Indeed, it’s these kinds of films that shaped the idea we still have of what reporters and journalists do and act like, a type that seemed to spring to existence right after the Depression (although they were around much earlier than that), always acted slightly uncomfortable in a white collar and determined to put his or her bosses in their place. It’s no accident The Front Page (the source material for His Girl Friday) was written by two former newspapermen, Ben Hecht and Charles McArthur, who went to Hollywood and gilded their own reputations, finding the money easy and the competition “idiots.”

END_OF_DOCUMENT_TOKEN_TO_BE_REPLACED 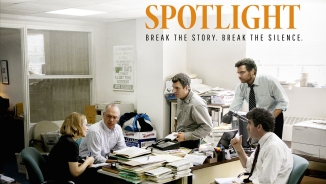 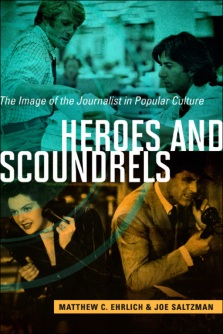 In light of Spotlight’s six Oscar nominations  – and the winners being announced at the Academy Awards ceremony on Sunday, Feb. 28 – we talked to Joe Saltzman, co-author (with Matthew C. Ehrlich) of the new book Heroes and Scoundrels: The Image of the Journalist in Popular Culture (University of Illinois Press). [Ed. note: Spotlight won the Best Picture Oscar.]

Saltzman is a professor of journalism and communication at USC Annenberg, and he maintains the comprehensive Image of the Journalist in Popular Culture (IJPC) research database www.ijpc.org (more than 87,000 entries and counting). Saltzman previously had a long, award-filled career in newspaper reporting and editing, broadcast journalism and documentary filmmaking. Roger Leatherwood interviews him for EatDrinkFilms.

END_OF_DOCUMENT_TOKEN_TO_BE_REPLACED 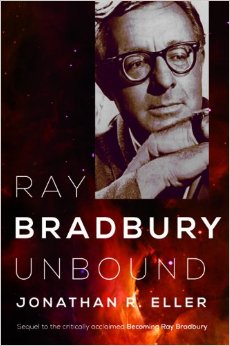 Jonathan R. Eller’s new biography Ray Bradbury Unbound (University of Illinois Press, 2015) is really only the second half of the story. It follows the famous fantasy/science fiction writer’s career from 1953, after the publication of Fahrenheit 45, until his death almost 50 years later, in 2012. END_OF_DOCUMENT_TOKEN_TO_BE_REPLACED

Scan the credits of some of the best-known comedy films of the silent era and one name appears again and again: Clyde Bruckman. END_OF_DOCUMENT_TOKEN_TO_BE_REPLACED

This Saturday night, November 14, the Niles Essanay Silent Film Museum will screen the remarkable Raymond Griffith vehicle and Civil War comedy, Hands Up! An almost-always dapper and unflappable gentleman, Griffith could get into the most bizarre situations and get out of them again with seeming ease. And if memory serves (I haven’t seen the film in decades), Hands Up! is a minor gem. END_OF_DOCUMENT_TOKEN_TO_BE_REPLACED