First a word for Cinéma, de notre temps , the longstanding series of filmmaker studies of which Gabe Klinger’s Double Play  is the latest. Launched as Cinéastes de notre temps  in 1964 by André Labarthe and Janine Bazin (André’s wife), the program presented critically engaged, in-depth interviews of film directors akin to The Paris Review ’s celebrated “Art of Fiction” feature. Unabashedly auteurist, the French series was dedicated to the notion that cinema is best understood by its singularities.

After being canceled in 1971, the series returned as Cinéma, de notre temps  in 1989 with the wonderfully titled David Lynch: Don’t Look at Me . Subsequent installments continued to provide a platform for younger filmmakers to reflect upon their precursors (Claire Denis’ Jacques Rivette: The Night Watchman , Rithy Panh’s Souleymane Cissé , Olivier Assayas’ HHH: Portrait of Hou Hsiao-hsien , and Pedro Costa’s Where Does Your Hidden Smile Lie? ). Rather than assembling experts and celebrity friends to vouch for a subject’s significance—the tired protocol for the vast majority of documentary profiles—the Cinéma, de notre temps  films tend to invent situations in which that same subject might interestingly speak his or her mind. 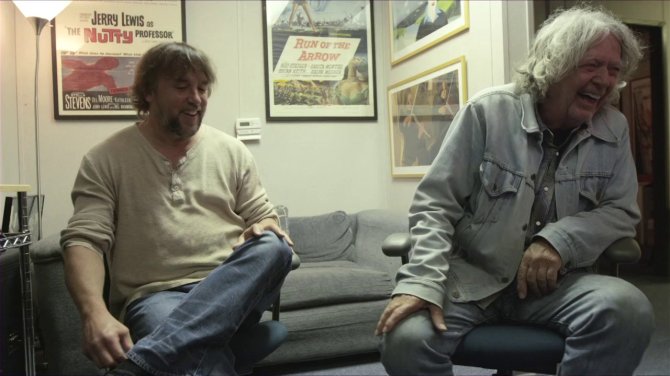 There’s no shortage of talk in Klinger’s double portrait of James Benning and Richard Linklater, though it takes the form of informal conversation rather than analytic cross-examination—think artist interview as buddy comedy. Like many of Linklater’s films, the film seems to unfold over a few days in Austin. Benning visits to show work at the Austin Film Society, an organization Linklater co-founded as a fledgling cinephile in the mid 1980s. Introducing one of the screenings, Linklater recalls how he invited Benning to Austin as soon as the Film Society received funds to host visiting filmmakers. The two reminisce about this pre-Slacker  (1991) period throughout Double Play , and as with any reunion (a ritual with obvious importance in both directors’ work) we’re primed to consider the road traveled. There’s no avoiding Linklater’s progress as he tours Benning around his production offices and country house. The two discuss the contrasts of their filmmaking styles in terms of narrative, but these aesthetic distinctions point to more basic economic divisions. Linklater is surely one of the more down-to-earth of the Sundance generation, as much rooted in film history as he is in Texas (we glimpse posters of Orson Welles’s Othello , Zabriskie Point , Killer’s Kiss , The Big Heat , and Weekend  in his office), and yet it’s hard to compete with a guy who includes gasoline and sandwiches in his filmmaking budget.

Indeed, it seems likely that Klinger chose these subjects not only because of their shared history and fascinations but because they represent two different faces of American independent filmmaking. Benning is the avant-garde troubadour, the lone wolf on the road. He cuts a familiar figure in this respect, though his twinned replicas of Henry David Thoreau and Ted Kaczynski (Two Cabins ) makes clear that he’s alert to the ambiguities of seclusion. For his part, Linklater comes as close to achieving a popular cinema of one’s own as can be imagined in today’s American cinema. While for many years alternating between more forthrightly commercial and personal projects, he remained uniquely tethered to his own strengths as a storyteller. Bernie  (2011), Before Midnight  (2013), and Boyhood  (2014) are the fruit of this self-assuredness. Linklater is more of an insider than Benning, certainly, but he’s also the rarer bird. Academia has shored up many of Benning’s disciples, after all, but it’s difficult to imagine a studio backing a younger director’s Boyhood . 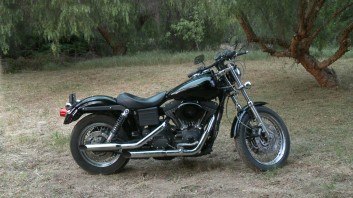 These revealing differences are given fuller hearing at the YBCA Screening Room, where programmer Joel Shepard is taking Double Play  as an occasion to revive lesser known films: Benning’s Easy Rider  (November 13th and 16th) and Linklater’s Tape  (15th), minor works that serve to highlight each director’s experimental tendencies. Easy Rider is an oblique reconstruction of the 1969 film, with Benning tracing the cosmic cowboys’ road trip in Obama’s America. The original locations appear desolate, empty even of movement. Dialogue from the original film bleeds into sync sound of wind and buzzing heat, but Benning keeps the speech so buried in the mix as to make them seem the voices of half-remembered ghosts—a melancholy evocation of the counterculture, to be sure. Tape , meanwhile, plays as the inverse of the “Before” movies: a rude DV image in place of luminous cinematography, huis clos Michigan motel room setting instead of an airy European city, and a frantic, fragmented montage rather than gliding long takes. The film, adapted from Stephen Belber’s play, unfolds in real time, with Linklater’s characteristic attention to the perception of reality given a sharp edge for being focused on a contested rape. 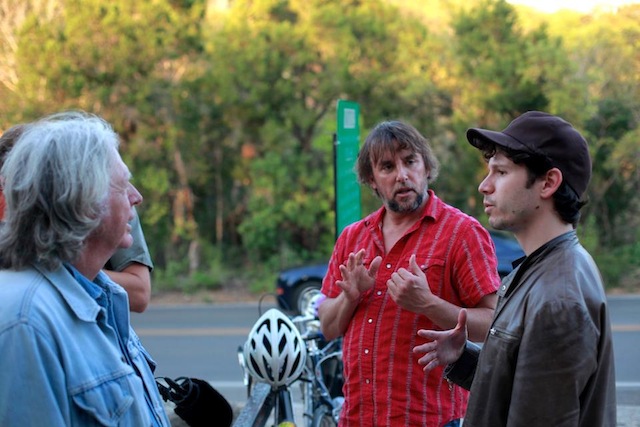 One does occasionally wish for an outsider interviewer to push the two filmmakers to reflect a little more directly about the problems and possibilities of their respective modes of filmmaking in Double Play , but as they talk these differences come to seem less important than their common understanding of cinema as providing for a kind of enactive philosophy. The essentials of their conversation are not so different, finally, from the kind of thing Thoreau and Emerson might have talked over on one their ambles through the Concord woods. Too often film criticism falls into the trap of praising one filmmaker’s achievements at the expense of all the others. In fact, we don’t need to choose—a sanguine realization and reason enough for Klinger’s Double Play .

Max Goldberg writes about cinema for a variety of publications and works as an archivist.