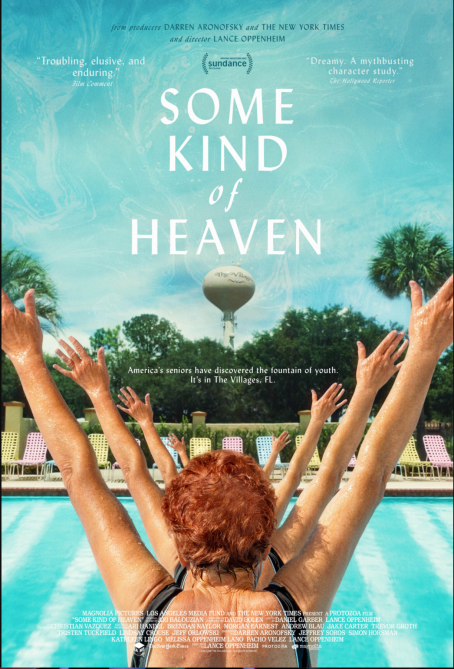 This is the phrase used these days to mock attitudes of 55-plus year-olds who are perceived as never wanting to grow up, and thinking that the utopian ideals that they had in their youth are somehow going to translate into adulthood.

The exceptional new documentary Some Kind of Heaven features what at first seems like such a Boomer utopia, as we enter the largest retirement community in the nation, which one Yelp reviewer describes this way: “If you want your retirement to be like an adult summer camp that never ends, you’re their target demographic.”

Premiered at Sundance and the first feature directed by Lance Oppenheim, the film takes us into Florida’s The Villages retirement community, with its 130,000 residents (the same population of New Haven, Connecticut), 2700 social clubs and so much more. Billed as “America’s Friendliest Home Town,” the complex was developed in the mid-eighties, and its founder is represented by a statue in one of The Villages’ 89 pools.

Activities include pretty much anything you could think of, including golf, pickleball, rowing, water ballet, belly dancing, bowling— and some you probably wouldn’t, like a precision drill team with golf carts, cheerleading, and a club just for women named Elaine.

It’s relatively easy to make a documentary that mocks a person or a way of life. It’s much more difficult to go beneath the surface and explore a subject with nuance and depth, which Some Kind of Heaven does, and why it’s so satisfying. And okay, the luscious shots of Florida sunsets, ocean views, and palm trees coupled with lively Boomer music classics also add to the enjoyment.

About The Villages, one resident says, “It’s like going off to college. You can be who you want to be.” But the reality is that once you’ve hit the half-century mark, you inevitably have lived a life that accompanies you—both the good, and the not-so-good, in this case juxtaposed onto a canvas of a mythical tropical paradise. 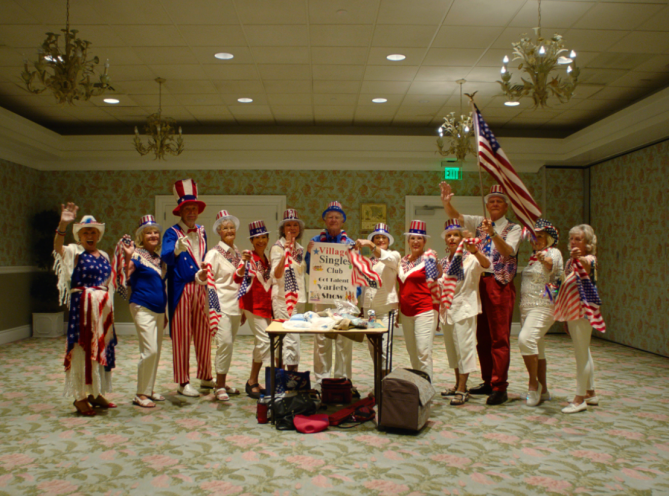 The four people that Some Kind of Heaven has chosen to highlight are each interesting and complex; we really come to care about these people.

Anne and Reggie have been married 47 years. Described kindly as “unusual” by his wife, Reggie’s drug use gets him in trouble with the law—the real law, not the Disney version of law. Is his loss of control and mental acuity tied to the drugs, minor strokes, or something more troubling? Anne has the patience of a saint, as they say, and tries to find her own way to thrive, while not giving up on her man. Her devotion brings real heart to the film. 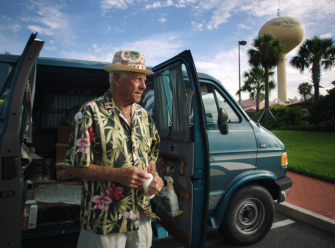 Dennis, at 81, lives in his van, cruising the Villages for a wealthy woman to take him in (surprisingly, the gated community doesn’t stop folks for identification). Still the rakish sort, he favors the complex’s pool areas, which he explains are better pickup spots than The Villages’ churches or clubs. He claims to have worked for famous actors in L.A., but his credibility is suspect. Does he find love—or at least companionship? Can he escape a previous brush with the law?

Barbara is single, and just now trying to jump into the dating pool. She is attracted to a handsome golf cart salesman, who also runs The Villages’ “Parrothead” club (think Margaritaville), but he’s clearly playing the extremely plentiful field of single women (there are 20,000 singles in The Villages). A fabulous—and surprising– scene shows her discovering a passion (and exceptional talent) that she can enjoy until the right one comes along. 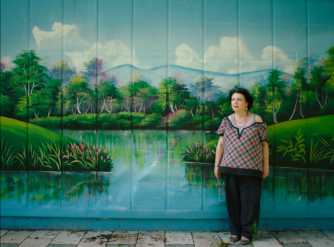 Does it seem fair that the Baby Boomers, after mucking up the world, now decide to escape to their own Disneyland, where as one resident says, “you don’t see slums or murders” (or much diversity, for that matter)? They rejected and redefined traditional values. They are also the wealthiest and most active generation, with the most disposable income for retirement. They’ve earned the right to live in their own private fantasy world, but what they make of it is on them. Is this really the American Dream? “We live in a bubble,” says one resident.

The Villages is currently in expansion mode, having purchased over 10,000 additional acres in the last few years.

Some Kind of Heaven currently is playing in theaters and on demand. Look for and support your favorite independent cinema. Your “admission” is shared between the theater, the filmmakers, and the distributor.

In the San Francisco Bay Area you can select the Balboa/Vogue Virtual Screening Room, the Roxie, the Elmwood in Berkeley and the Rafael@Home.

“The Sundance Diaries: This First-Time Filmmaker Cold-Emailed Darren Aronofsky to Produce His Premiere.” An interview with Emily Buder at No Film School.

The transcript of the video interview above on Screen Rant.