Directed by Chester Erskine, 1952’s Androcles and the Lion was sold as part of the 1950s cinematic craze for the Roman Empire.

This unusually vivid George Bernard Shaw adaptation (now on Hulu Plus as part of the Criterion Collection) is a play (via Amazon or Indiebound) first and a movie second, but it has production values. Its ancient Syracuse looks like Mexico (which isn’t a bad match). It has a cast of hundreds including Jim Backus, giving quite a serious and credible performance as a Roman soldier, and a spot of stock footage here and there to patch the bare spots. Sadly, a “bath of the vestal virgins” scene filmed by Nicholas Ray was jettisoned. Alan Young, with a Noah’s Arc of a resume but best known as Mister Ed’s straight man, is a fellow who loved animals not too wisely but too well. He’s a meek, critter-cuddling Christian tailor rounded up by the Emperor’s men for a lion-feeding show … and he’s saved by a random act of kindness.

“Hmm, what do you make of the script?” Alan Young and a furry friend in Androcles and the Lion.

The pretty legend by Aulus Gellius, a second-century Roman writer, appealed to Shaw. The play harmonizes with a turn-of-the-century joke—a Punch cartoon?—about a little boy drawing the wrong lesson from a painting full of slaves earning their martyr’s crowns. The famous punchline: “Look, there’s a poor lion who hasn’t got a Christian.” Shaw’s thesis was that the true tolerant, loving, non-violent Christian—whom even the godly will agree is a rare breed—is unbearable to any form of government. They are at worst dangerous and at best, badly mannered. In Androcles , a gamesmaster witnesses the cheerfulness of the martyrs to be and whines, “They vulgarize the whole affair.”

Robert Newton hams it up as Ferrovius in Androcles and the Lion.

The mob of Christians include Ferrovius, a nigh-psycho ex-soldier, who fears he’ll lose his religion and fail to turn the other cheek when the gladiators come for him in the arena. The detective in Around the World in 80 Days , the insane artist in Odd Man Out , Robert Newton was a wild-eyed and satisfying ham who is responsible for teaching all pirates to talk as if they had a catarrrrrrhg. It was his native Cornish accent he exaggerated for his celebrated role as Long John Silver. Also in the gang volunteering to be lion food is the patrician Lavinia (a preposterously pretty Jean Simmons, not yet 25); what keeps her in training as a martyr is a kind of variation on the credo quia absurdum; to her, Christianity is just another religion that nobody sane really wants to die for. Yet she gave her word as a lady, and must stay at the side of the doomed slaves.

Paganism on the horizon: Jean Simmons is preposterously pretty in Androcles and the Lion, while Victor Mature looks good in a leather skirt.

Simmons has a thing for a sympathetic Roman captain (Victor Mature). Mature starred in a half-dozen sword and sandal films. He was considered a kind of joke in his day, but he was warm and handsome and never looked stupid in a leather skirt, nor did he seem to lack in valor expressing his own code as a soldier here: “Death in battle spares more people than death in bed.” He’s baffled by a jealous God who wants the pantheon all to himself. In Androcles and the Lion , then, you detect the preliminary seeping of the paganism that was ready to inundate the 1960s. 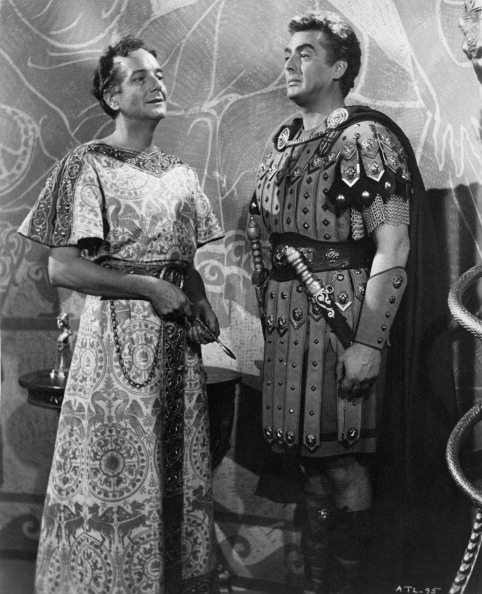 When in Rome…: Maurice Evans plays Caesar to Victor Mature’s captain in Androcles and the Lion . 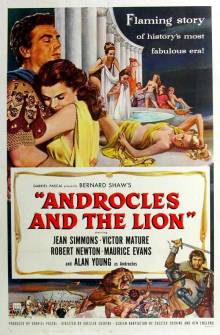 While it’s mostly true Maurice Evans never made a good movie that didn’t have apes in it, he’s gusty comedy relief here, as a rolling-syllabled, fey emperor introduced to the camera feet first (he’s having his massage). It may be great to be an emperor, but it’s a nuisance to have to fret over these fanatics ruining the orderliness of a pluralistic society. His summing up of the problem at hand still has contemporary keenness: “Too much religion is bad for the liver.”

Richard von Busack is a staff writer at San Jose’s Metro Newspapers. He’s the author of The Art of Megamind and has written for Entertainment Weekly, n +1 and cinematical.com.  He’s a member of the San Francisco Film Critics Circle.

One thought on “ANDROCLES AND THE LION: A Tasty Serving of Post-Easter Ham”