They’re scarce beasts, Scotch cocktails. Whether smoky or peaty, Scotch whisky is viewed as a lonely, Brontë-esque figure on the moors, demanding to be savored in solitude. But I remain partial to mixed drinks featuring the spirit, an affection newly burnished by a bottle of Bank Note, the affordably priced blended Scotch containing a higher-than-usual 40% single malt. Three of my favorite such cocktails boast show business provenance. 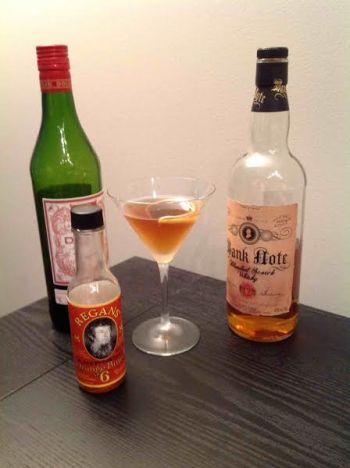 The Rob Roy, the clan’s senior member, was named after the short-lived 1894 Broadway musical that gave us those storied additions to the songbook “Who’s For the Chase, My Bonnie Hearts?” and “My Name is Where the Heather Blooms.” Almost from the moment of its creation it has been regularly referred to—and dismissed—as a Scotch Manhattan. My EatDrinkFilms colleague Michael Cecconi presented his recipe recently. I take mine with orange bitters as prescribed by The Old Waldorf-Astoria Bar Book (1935, via Amazon or Indiebound). Also consider adding a dram of Bénédictine or Drambuie and transforming it into the Bobby Burns.

The Blood and Sand showcases Scotch to better advantage. Vicente Blasco Ibáñez’s 1908 novel (Amazon or Indiebound) of a young bullfighter undone by success was first brought to the screen by the author himself in 1917. Five years later, a Paramount Pictures adaptation cemented the fame of Rudolph Valentino; the actor later identified the role as his favorite and the performance as his best. A 1941 remake with Tyrone Power and Rita Hayworth also struck gold. As for the 1989 Spanish-made version inexplicably starring Sharon Stone, this much can be said: it exists. Both the 1922 and 1941 films spawned comic send-ups by marquee talents, first Stan Laurel’s Mud and Sand (in which he plays Rhubarb Vaselino) then the Three Stooges’ immortal What’s The Matador?

Where there’s smoke: Rudolph Valentino lit up the screen in the 1922 version of Blood and Sand .

Valentino’s triumph gave rise to the cocktail, the recipe debuting in Harry Craddock’s Savoy Cocktail Book (1930 via Amazon or Indiebound). The inspiration carries over to the ingredients, orange juice representing the sand and the rich red of Cherry Heering serving as sanguinary element. The Blood and Sand was initially an equally parts cocktail and many bartenders still prepare it this way. Up the O.J. ante, as the redoubtable gaz regan does, and it makes a fine brunch offering. But a spirit-forward version, the Scotch sent into the ring in its suit of lights, will bring the crowd to its feet waving white handkerchiefs.

What’s in a name: Mayme Taylor inspired the Mamie Taylor.

Our last Scotch concoction should be better known, considering it’s one of the earliest bucks—a highball with citrus and ginger ale or beer—and the obvious progenitor of the Moscow Mule. Its namesake was once quite the celebrity, even if the cocktail got her billing wrong.

Mayme Taylor was once the toast of Broadway, a light opera specialist who trod the boards in plays like A Knight for a Day . In 1899 La Taylor, overheated after a cruise on Lake Ontario, ordered the then-popular cooler of claret and lemonade only to receive Scotch and ginger ale. After requesting the addition of some lemon, she pronounced it refreshing.

The revised and now easier to spell Mamie Taylor swiftly took America by storm, helped by political happenstance. The drink had found a foothold in Philadelphia, home to the 1900 Republican National Convention. There, a flotilla of flacks and flunkies made Mamie’s acquaintance and talked her up coast to coast.

The cocktail’s vogue was over by the next election. As for Mayme the actress, by 1906 she was reduced to San Francisco matinees of “a playful satire on New York fads and fancies.” Still, tales of the drink’s deceptive strength lingered. In Olin L. Lyman’s 1909 novel The Lash (Amazon or Indiebound) one character decrees:

This Mamie is a jade … She’s that smooth and insinuating, so agreeable, that it seems as if you could drink her all night, so you generally do … these blamed fancy flips are what play the devil with a fellow. They’re come-ons, clear from champagne to ginger ale splits. They taste so pretty that the next is a necessity, and after that, in the pleasant salve to the palate, you lose count. Take Mamie here. She’s the worst in the push.

A touch excessive, perhaps, but the Mamie Taylor is indeed a bracing cooler, the cocktail the Moscow Mule thinks it is. The current acclaim for the Penicillin proves Scotch and ginger in tandem have an audience. It’s high time Mamie made her comeback.

The Blood and Sand

What’s in a name: Mayme Taylor inspired the Mamie Taylor.

Add Scotch and lime juice to an ice-filled highball glass. Top with ginger beer. Stir. Garnish with a lime wedge.