“Everyone wants to become the perfect version of ourselves.”

[This is Part Two of a series. Click here to read Part One.] What’s so particular and wonderfully fulfilling about the merging and mixing of realities is how it can shift in an instant, depending on context. Who we are with, how they see us, and how we see ourselves with and in them – what world am I in today and how do I navigate it, relate to it, become it? New York City is a perspective – at times sex and desire; at times art and fashion, film and food. In this particular instance, what I decided to eat and drink was highly dependent on who I wanted to see and why. It also depended on my mood. Just like film and fashion – sometimes sultry and singular, at other times part of a crowd, a collective togetherness that supersedes any personal interpretation. I love the malleability of it all, but also its specificity, its be-here-nowness. 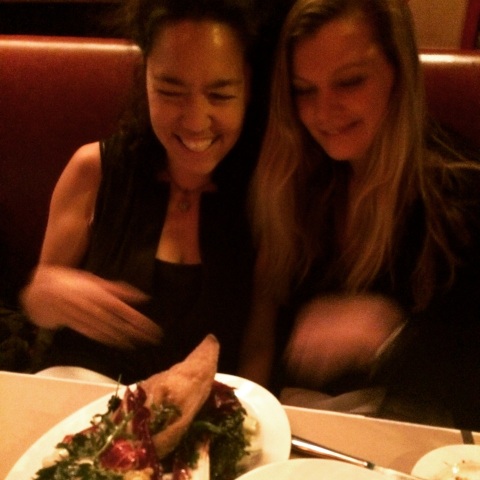 Susan and me, and a pig’s ear salad, at Spotted Pig, West Village.

Susan and me preparing for the NY salon dinner. Photo by Ronnie Peters.

Though I only was able to go to a handful of places during this trip, here are some recollections and images from my adventures in eating, drinking, and watching a couple of films—one in the making, the other a Lions Gate early screening. And I’ll end with a to-do list—something that always makes me think about the return, even before I depart. All of this brings together aspects of what I like to do, eat, drink, see when I have the time. It’s in many ways a perfect version of myself—simultaneously satisfied but always wanting more.

In the mornings I always start with coffee, and though in the Bay Area that means a latte at Pizzaiolo or Elmwood Cafe, a white mocha at Sacks on College, or just a plain old french roast cuppa whatever at home during the week (or latte perfection by my husband Lloyd on the weekend), in NYC I always hunt down the new hot places. But this visit was different. I awoke each morning and sat at a breakfast bar in the gorgeous modern space that was my friend’s dining room– we talked about the previous night and the day ahead and drank French press something or other and it was perfect. The two exceptions were Happy Bones (the super cool New Zealand-owned space where I interviewed Susan about her and Ronnie’s Eye Spies business), and an intimate cafe on Houston called Fair Folks & a Goat, where a monthly membership is $25. (It’s next to the first restaurant I ate in when I lived on Sullivan Street in 1993, Arturo’s.) For a few minutes I thought about how that could work in the Bay Area—membership cafe and wine bar – but “squirrel.” I was onto the next thought, my next destination. 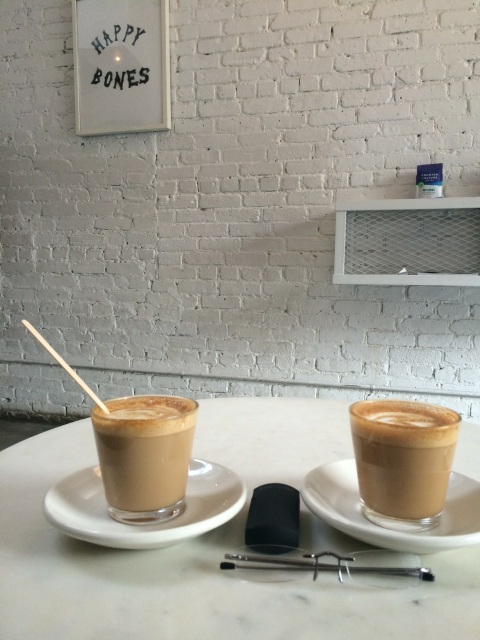 Our flat whites (aka lattes) with Eye Spies, at Happy Bones.

Rewind to the first night … I arrived on Saturday the 14th and we chose dinner at the beautifully lit Pearl and Ash and ate a few things that were absolute perfection: the bread with chicken butter and maple syrup (!!), and the trio of warm donuts—blood orange, chocolate stout and apple bacon—I can’t quite seem to forget. And then off to Sel Rrose, another beautiful space where we tried The Fountain, French 27 and Fresh Widow.

The next day was all about shopping for the salon dinner. Whole Foods is no Berkeley Bowl, but it worked out well, except for my watermelon radishes. I got regular non-fancy radishes which disappointed on the plate, so we put them in water and they became part of the décor—the punctum on the table. Looking back, what was insightful about the dinner that evening was seeing the salons as truly moveable feasts—not Paris, but Berkeley was my moveable feast, this time in NYC. It was exciting to comprehend the possibility of continually gathering in so many types of ways.

The following day, lunch was at Russ & Daughters, recommended to me by one of my favorite San Francisco chefs, Adam Sobel, who makes the best pastrami sandwich ever, and who said I couldn’t miss it, or Toro for that matter. So I met my high school friend Tim Harrington there, and his friend Alexandra Monzon, and we drank and ate and ate and ate, and I came out of the fog that hazed over me from the evening before. And better, we ended up at Balthazar for dessert. That evening I met Cady at Toro. I started with my Mezcal sour, and we had lots of divine little plates—the pulpu (Galician octopus), huevos diablo, pimientos de Padrón, ensalada cortada, butifarra, and the setas (mushrooms with farm egg). 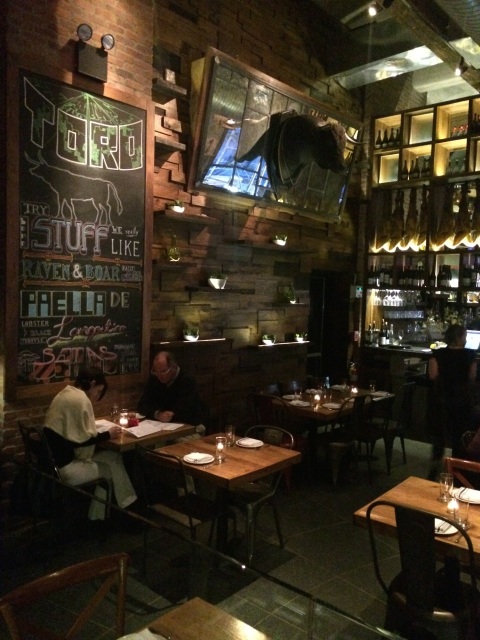 The next day I made my way to the Lower East Side, stopping by Le Labo atelier and trying a few of the fragrances on different areas of my arms. I also went to my favorite INA stores on Thompson and then Prince, and bought a used Theory dress I can’t seem to get myself out of, finally arriving at El Rey for lunch with another old friend Kim Dang. We started with their kale salad with shaved almonds and their falafel with minted cauliflower and for dessert, went to the old school Economy Candy, where I bought those baseball cards packages with gum from childhood—Growing Pains, Alf, Batman. All stale but so cool. 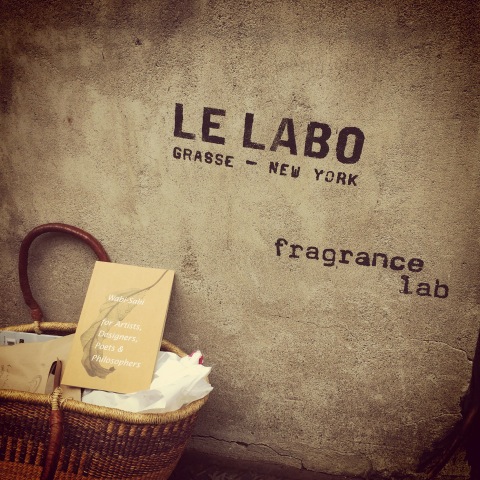 I made my way to Brooklyn eventually to go to the set of Josh Marston’s new feature (untitled, with Rachel Weisz, Michael Shannon, Kathy Bates and Danny Glover), my raison d’être to be there. This was the first set I had ever been on. I checked out craft services; had my own pair of headphones to listen to takes; met many members of the crew; was taken care of by Josh’s assistant, Jason Stefaniak (who answered all of my never-ending questions); and eventually I actually did get to see Josh – we ate a “lunch” of sushi together at 9:30 p.m., and then I ran to catch a cab to my next dinner date at the Spotted Pig, one of my favorite West Village spots. I arrived to a Mezcal sour, crispy pig’s ear salad, burrata and pork rillette already on the table, and it was all divine. As we left, I wanted to continue on, perhaps to a few of the bars mixologist Michael Cecconi recommended to me – Booker & Dax/Momofuku, PDT, Pouring Ribbons, Death & Co, Mayahuel—all in the East Village, my old home turf. But we were on the West Side, headed south. I was almost tired, and there’s always fall, and dinner #2.

Josh Marston, on set, at the dining room table.

My final day was divided between a morning interview and a lingering lunch at Locanda Verde with my friend Nathan Kilcer from College of the Holy Cross, who’s worked for Bruce Weber in Tribeca for years. He does remarkable art direction on Bruce’s publication All-American . We talked family, passions, and living and surviving in NYC. I was the one who was supposed to be there amidst it all, but to raise a family there seemed impossible to me – to go to grad school there, even more impossible – so I ended up in Oakland at UC Berkeley. But Nathan stayed and soared. We talked about the energy of the city – how it can suck us dry but then give back quadruple-fold. 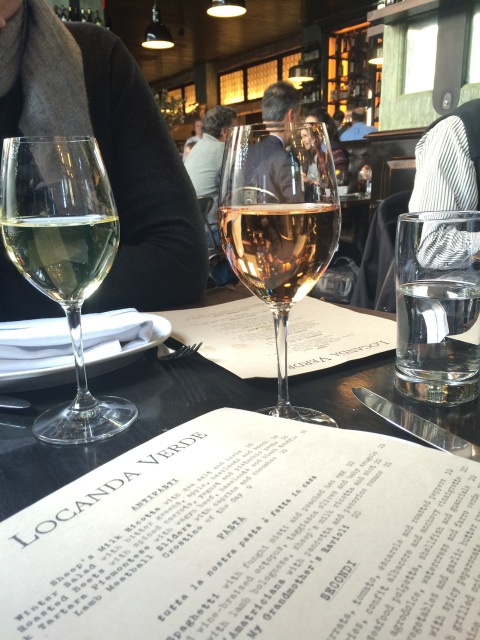 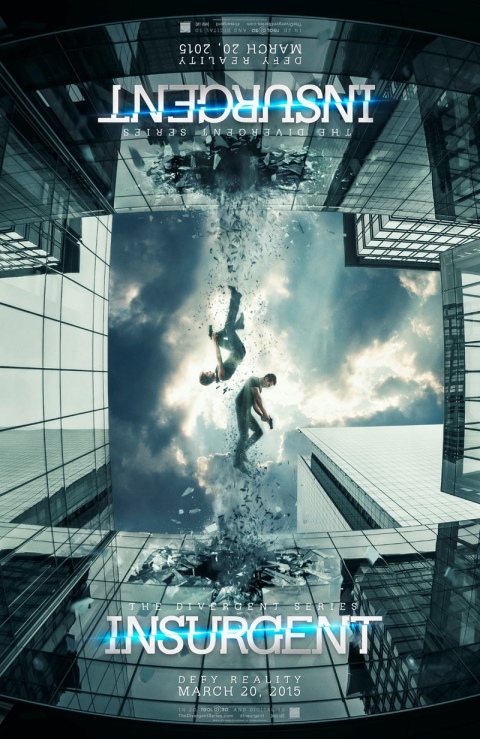 That evening I went to an early screening of Insurgent , meeting Pascaline for drinks—always one of my most favorite things to do in NYC – beforehand. (When I’m missing the East Coast I watch continuous episodes of Sex and the City and make myself a Cosmo, and I’m nostalgically taken back.) I told myself the Insurgent screening was for my daughter Royal, to get her a collection of the keychains of each of the factions, but it was for myself as well. NYC is movies for me – most of the time alone, but once in awhile with a lover, and this time with a full audience in a screening room at the Tribeca Grand. Afterward, my last date of the trip got sick, but I headed to Charlie Bird anyway, alone. I love those moments, for how can one ever be alone in NYC? I asked to sit in the back corner, and I was brought a Chartogne-Taillet champagne, and a few Italian whites that went with the oysters, shrimps, scallops with pistachio (!), and a farro salad. I wrote and read and watched and listened and was so happy.

Midnight—Manhattan from the Brooklyn Bridge. 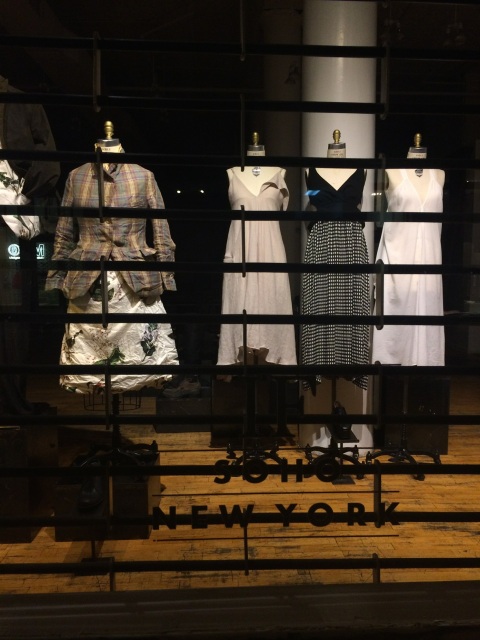 Mannequins at night—one of my favorite things to capture.

I left at midnight to return to the set, spent a couple more hours, hopped in a cab after 2 a.m., and had the driver drop me in Soho so I could take my last walk back, slowly gazing in the windows, remembering my arrival and my sweet connection with my seat-mate, Blake. Hours before my departure, I thought about what happens when I arrive on the streets of NY, how everything about me changes – the way I see the world, respond to it, enter into it. I am indeed born again. But now it’s time for me to return. Finally, after all these years, I realize the power is in the dosage. Little ones are best.

“If I wasn’t moving forward, I felt like I was going to explode.”

Running ahead, looking back on the way to The Breslin, 2013. Photo by Sorrel Ahlfeld. 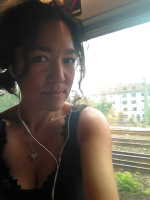 One thought on “NYC, Now and Next Time: The City Through Film and Fashion, Food and Drink”