Seasons. The ones that dictate how tasty your tomato will be (best in late summer), how excited you are for skiing (winter, natch), and how much of your time will be given over to griping (spring and fall: I’m looking at you, daylight savings time). These seasons present the garden-to-glass mixologist with a varied palette from which to choose. And now, in the winter, there are few choices offered. In the face of such adversity it is good to dig deep (farming pun intended) and make the best of it, so here comes my beet cocktail, Root Cause.

Besides a homemade beet liqueur, Root Cause uses Punt e Mes. This sweet vermouth has a slight bitterness to it that makes it the perfect training wheels for that pungent flavor. There are two camps for beets and bitter: liked or abhorred. In the Root Cause I use whiskey as the Trojan horse to smuggle both a bit of bitter and a bit of beet into the cocktail, and ultimately into my guests.

In stark contrast to nature, Hollywood has put its own stamp on this season: the two-headed beast that is awards season and the holidays. The duumvirate of prestige and pandering. And within this maelstrom of quality and crap can we find something to enjoy?

On the side of pandering we have The Hobbit: The Battle of the Five Armies . Can we please put a moratorium on separating a single book into two or three movies? When you come to my bar I don’t dole the ingredients out to you separately, charging you for each installment. Though, as I type this, a new business model is forming for my next venture. This, blessedly, will be the last of the Tolkien CGI extravaganzas. The lesser Tolkien won’t see the light of day, as even Peter Jackson is over it. But he does have a lot of orc costumes lying around and he’s practically a god in New Zealand, so I am not betting against his unstoppable Tolkien machine. 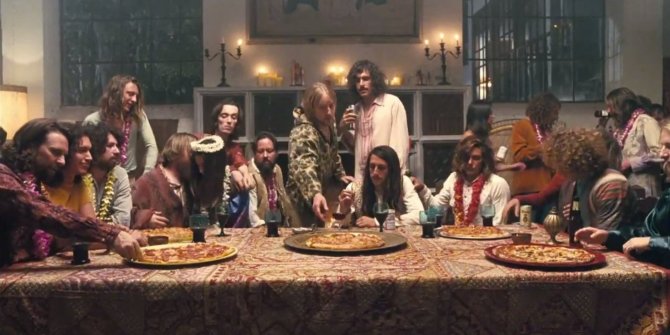 Yearning for prestige? Try Paul Thomas Anderson’s Inherent Vice . With a genius cast, the authorial authority of no less than Thomas Pynchon, and the peerless directorial chops of the “I drink your milkshake” creator, this movie is bound to turn heads.

Let us hold Nicholas Cage’s latest offering, the Paul Schrader-helmed Dying of the Light , squarely in the pandering category. Though given the star’s financial pitfalls it might just as easily fall under the “paying for my castles” category. We can sum this one up with a simple equation:

And here is a final movie that defies the dialectic:

What to make of a swords and sandals epic that uses the Bible as its source material? A cursory bit of investigation reveals that Noah has passed the $300 million mark internationally. Will lightning strike twice? Will Christian Bale use his Batman voice? Will the production transcend the charges of racism in its casting? Will Ben Kingsley ham it up Prince of Persia-style? The only thing I am sure of is no matter who wins (spoiler alert: Moses wins) I’ll have lost (any interest in going to the movies).

Peel the beets. Wrap individually in foil and roast at 350 F until fork tender. Let the beets cool then slice as thinly as your equipment will allow. Add to vodka and let steep for 4-7 days, stirring it daily. The beets’ sugars and wonderful earthy taste will be transferred to the vodka when the infusion is complete. Remove beets and bottle liqueur.

Michael likes all things drink related.  Michael likes movies.  And, in an odd twist of fate, Michael loves words about movies.  These three facts combine to make a perfect storm of sensibility, ability, and inebriation needed to fulfill duties at  EatDrinkFilms.  When not rhapsodizing about film, Michael tends the bar at Two Sisters Bar & Books in San Francisco.  He teaches mixology in San Francisco and New York.  And lately, he’s been trying to capture the magic of what he does in a bottle so he can spread his tasty libations across the land.  Please feel free to contact him at  themobilemixologist@gmail.com with all queries.