All roads lead to Trenton, NJ after a young black man is lynched in the postwar American South in I Spit on Your Graves (J’irai cracher sur vos tombes) , Michel Gast’s 1959 fever dream revenge thriller, a surreal standout among the dozen rarely–seen titles that make up The French Had a Name for It, the latest film noir series at San Francisco’s Roxie Theater.

Programmed by longtime Roxie programmer Elliot Lavine’s I Wake Up Dreaming and MidCentury Productions Executive Director Don Malcolm, the Nov. 14-17 four-day festival celebrates the cinema of the country that did, indeed, provide a moniker to the downbeat, cynical crime dramas that took blossomed in the 1940s and ’50s. The grifters, killers, femme fatales, chumps, bad girls with hearts of gold, and the rest of film noir’s collective damned are all here but with a flair that is distinctly French.

I Spit on Your Graves is the most extreme of the bunch, paired in the series’ climactic double bill with The Respectful Prostitute (La putain respectueuse), a 1952 adaptation of a Jean-Paul Sartre play. Taken together, the two act as a Gallic punch thrown at the American gut, thrillers that examine postwar race relations through the lens of crime and the eyes of outsiders. The Respectful Prostitute poses the existential dilemma faced by a black man implicated in a crime he didn’t commit in the segregated South and the white woman, an outsider herself, who may have the power to clear him, but at the risk to her own skin.

I Spit on Your Graves — a New Jersey of the mind, not of the mob.

I Spit on Your Graves is altogether wackier as the lynched man’s light-skinned brother Joe (Christian Marquand) vows to avenge the death, mysteriously taking his quest for revenge to Trenton, where he passes himself off as white. Certainly, this is not the first movie to portray the Garden State as a seething cauldron of corruption, but this is a New Jersey of the mind, not the mob. Joe is afraid of neither the town boss nor the motorcycle gang that does his bidding as he sets up his base of operations in the town bookstore (!), because what better place to seduce the ladies who are central to his plan? This 1959 thriller is an adaptation of one of Boris Vian’s Vernon Sullivan novels, books he originally tried to pass off as the work of an African American expat living in France. The movie and its shaky grasp of all things American (especially geography) is proof of the lie, but it is a wildly entertaining conceit that is positively bewitching.

“The French Had a Name for It” kicks off with two provocative dramas from Henri-Georges Clouzot, the director most famous for The Wages of Fear and Diabolique . Made 11 years apart, Manon (1949), an adaptation of Abbe Prevost’s 17th-century novel updated to the postwar era, and La verité (The Truth) (1960) spin the tales not so much of femme fatales as suicide blondes, each at least as self-destructive as they are deadly to the males in their lives. Manon (Cecile Aubry) simply wants what she wants and that is a lot more than her hapless, heroic husband Robert (Michel Auclair) can provide, her hunger for all that sparkles driving them toward doom. The couple at the center of La verité are just as disastrously matched, with Brigitte Bardot starring as Dominique, a slatternly bohemian on trial for killing her conservatory student lover (Sami Frey). In a sense, these women are sisters. Sharing more than a writer/director, Manon and Dominique are united in the way they court peril through their defiance of convention. 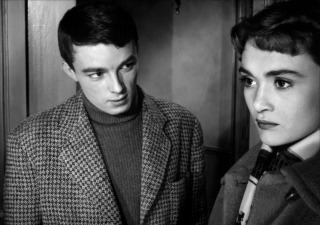 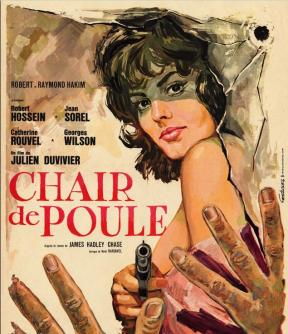 Even more fatal than those femmes are the women at the heart of the series’ penultimate twin bill, two from Pepe le Moko director Julien Duvivier. Tense, riveting Chair de poule (Highway Pickup) (1964), a James Hadley Chase adaptation stars Robert Hossein as an escaped safecracker who finds himself caught between the friendly mechanic (Georges Wilson) who gives him a job at an isolated gas station and the man’s bored wife (Catherine Rouvel) who wants him to steal her husband’s money. Danièle Delorme is one of cinema’s great bad girls in Voici le temps des assassins (Deadlier than the Male) (1956), a vixen who turns her seductive wiles on Jean Gabin’s good-hearted Les Halles chef. As the full scope of her designs on a man who at first sees himself strictly as a father figure become clear, the drama evolves into a chilling nail-biter. 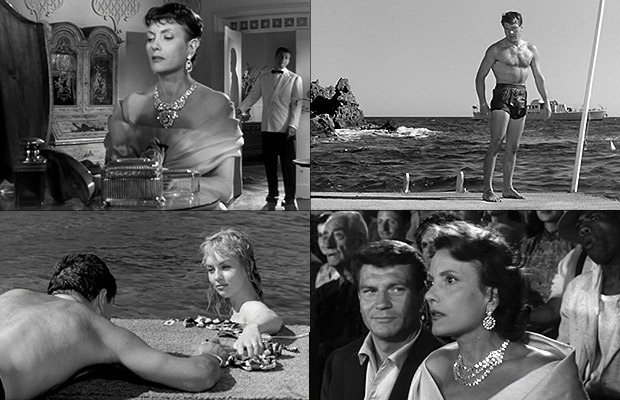 There are three more twin bills in the program. Rene Clair’s Les maudits (The Damned) (1947), a claustrophobic World War II thriller, and Henry Vernueil’s Une manche et la belle (A Kiss for a Killer) (1957), about a kept man plotting to kill his rich wife, demonstrate the range of ill-fated actor Henri Vidal, a matinee idol who died at 40 in 1959.

Toi le venin (Blonde in a White Car) (1958) and Un témoin dans la ville (Witness in the City) (1959) are dramas set in motion on the road, the former starring Robert Hossein as a man trying to decide which of two sisters offered him a ride one night, seduced him, and then threatened his life. Un témoin dans la ville , one of the most action-packed noirs in the festival, pits a man (Lino Ventura) determined to silence the cabbie who could place him at the scene of a murder against Paris’ entire taxi community.

Simone Signoret and Brigitte Bardot are the working girls desperate to escape dead-end lives at the heart of, respectively, Yves Allegret’s Dedee d’Anvers (1948) and Claude Autant-Lara’s En cas de malheur (Love Is My Profession) (1958). Signoret’s Dedee is poignant in her struggle to free herself of a vicious pimp (Marcel Dalio), while Bardot plays another spoiled child in the bleakly romantic En cas de malheur , a young woman who seduces her lawyer (Jean Gabin) but refuses to break up with her volatile factory worker boyfriend (Franco Interlenghi).

The Roxie’s latest trek down noir’s dark lonely streets is an entrancing one. The digital images are as gorgeous as the film’s ravishing stars. The titles are genuinely extraordinary, not just films rarely (if ever) screened in the United States, but also ones that are mostly unavailable on DVD or streaming. Best of all, these French twists on an American genre are sexy, suspenseful, and sublimely somber.

Pam Grady is a San Francisco-based freelance writer whose work has appeared in the San Francisco Chronicle, Box Office, Keyframe, and other publications.