The inspiration for this recipe came from Small Adventures in Cooking  by James Ramsden.

This is part of a series of books “New Voices in Food,” which includes another favorite of mine, Steve Parle’s My Kitchen: Real Food From Near and Far.  Now, Ramsden’s recipe called for fennel seeds and almost a pound of chocolate and six eggs.  I wanted to use fennel pollen and thought I’d dial back the chocolate a bit so I went to one of my go-to sources for basic recipes, Cook’s Illustrated ‘s The New Best Recipes.  (My other standard reference is Mark Bittman’s How to Cook Everything.)

The Cook’s Illustrated recipe was more to my taste, though I added some flour and cut down the sugar—so, sue me.  I’m a cakey brownie person and haven’t as much of a sweet tooth as I once had. 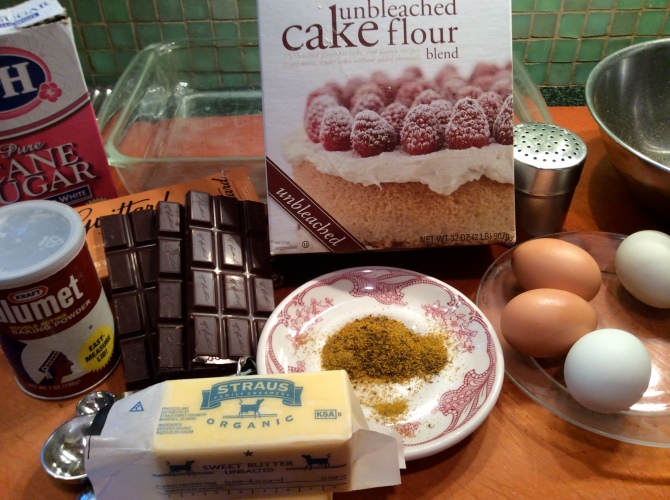 For the fennel pollen, first find some fennel plants—not too close to the freeway—and harvest the flowers.  Take the flowers home and put in a paper bag and dry in a 180° oven for three hours.  Shake the pollen onto a sheet of parchment paper and pass through a couple of strainers to get rid of the sticks, twigs, (and bugs).  Don’t worry, I’ll wait.  All set?  (See below for more detailed instructions.)

Preheat the oven to 325° and line a pyrex brownie pan with parchment paper.

Mix the pollen, flour, salt, and baking powder together in a bowl and stir to combine.

Melt the butter and chocolate together in a double boiler or in the microwave.  Remove from heat and whisk in the sugar and then the eggs one by one.

Add the dry ingredients in a couple of stages, stirring to combine between each.

Pour into pan and put pan in the oven for 30 minutes or so.  Test with a toothpick—you want between wet and completely dry.  If you’ve got a convention oven start testing after 25 minutes or so.

When it’s done, place pan on a wire rack for ½ hour and then remove brownies from pan by lifting the parchment paper.  Cut into squares and serve with berries and whipped cream or ice cream, or mascarpone, or crème fraiche. 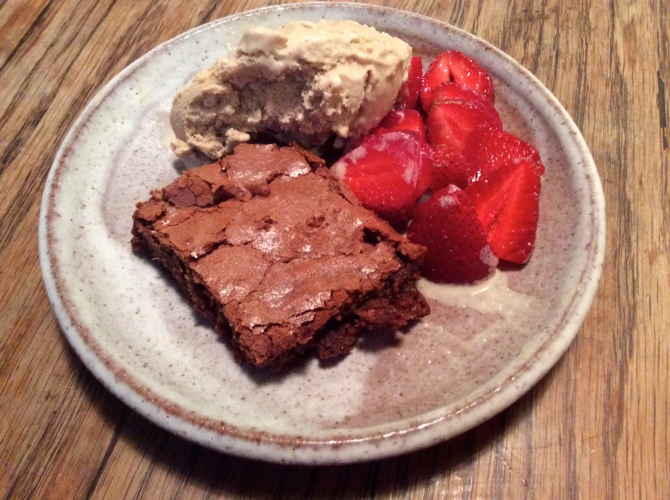 The steps above give the basics of collecting fennel pollen.  You can buy the stuff but there is no reason for people in the bay area to spend a lot of money on it.  Fennel is categorized as an invasive weed.  You can’t buy fennel seeds at Berkeley Hort, but you can find it all over the Bay Area. 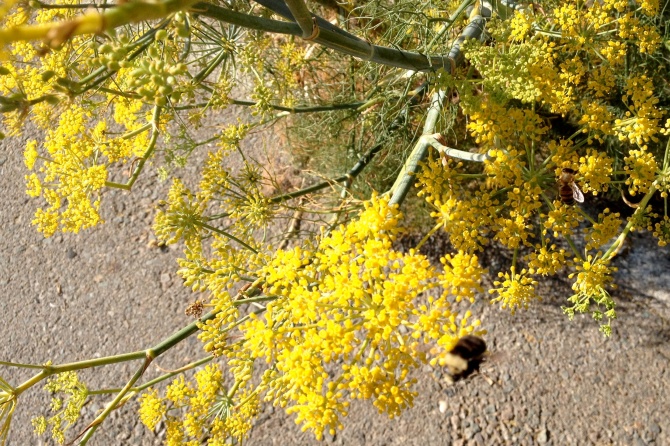 I foraged the fennel pollen for this recipe.  Now foraging is a great way to gather ingredients, though if you’re picking lemons off your neighbor’s tree, it’s good manners to ask permission.  We used to have a fraise du bois strawberry plant in our front yard.  I noticed that every morning a woman on her way to BART would swiftly reach down and grab one.  I never thought to chase her or even interact but one day I was walking our dog as she came by.  She seemed quite chagrined to be caught filching berries and started to apologize when I explained, “I don’t mind you doing that but you should know our dog pees there.”  Our berries were never disturbed again.

The same goes for fennel pollen.  Not so much the dog pee—though I’d stay away from dog parks—as other contaminants.  A lot of fennel grows along the freeways.  I wouldn’t eat it.  Clip off the blossoms that have a lot of pollen on them and put them in a paper bag.  When I get home I stick the bag in a slow oven for a few hours and then shake as much as you can off the flowers and put the pollen and other stuff through a strainer.  I usually use two different ones to get as much of the sticks and other bits out.  You’ll be left with a mostly golden pollen that works great as a rub for pork or salmon or as a flavoring for ice cream.