There’s no doubt about it, Martin Scorsese has clout.  If he decides the national cinema of Poland deserves international attention, so be it, as he has proven with his touring retrospective “Masterpieces of Polish Cinema,” which premiered earlier this year at New York’s Lincoln Center and now arrives at Berkeley’s Pacific Film Archive (June 14-Aug. 21, 2014).

In December 2011, at the invitation of Andrzej Wajda, Scorsese traveled to Poland to accept an honorary doctoral degree from The Polish National Film, Television, and Theatre School in Łódź.  There, he met with Jędrzej Sabliński (a digital restoration expert, now with DI Factory), and reviewed a list of new digital restorations of Polish films.  In the months following this visit, with the help of Scorsese’s non-profit organization The Film Foundation, the two men came up with the idea of a North American tour of a series of restored Polish cinema classics.  From an extensive catalogue of digitally restored films, Scorsese chose 21 masterpieces; 13 of which will be featured in the PFA series.  The series represents films from some of Poland’s most accomplished and lauded filmmakers, spanning the period from 1957–1987.  Curated by Scorsese, each film has been digitally re-mastered and brilliantly restored on newly subtitled DCPs.

“Each of the films in this special series,” Scorsese has written, “embodies what Wajda called the ‘impertinent freedom of creativity in the cinema.’  These are films that have great emotional and visual power—they’re serious films that, with their depth, stand up to repeated viewings.  The subtext of great conflict and cultural identity is universal, even if you don’t know the history of Poland, the themes in these films will resonate, as they did profoundly for me.” 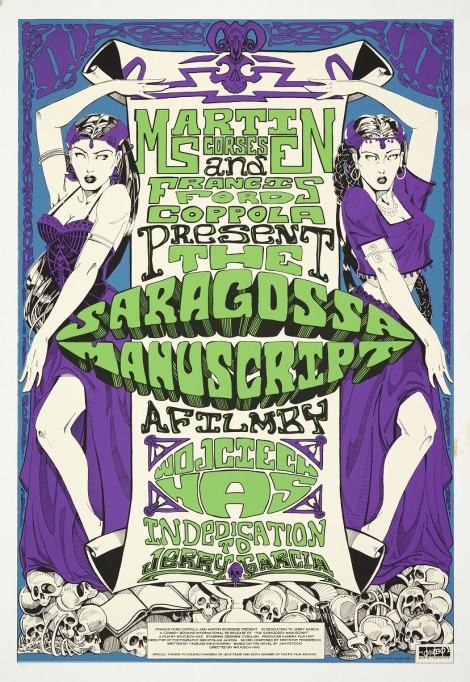 The PFA series kicks off Saturday, June 14, with Bay Area favorite The Saragossa Manuscript  (Rękopis znaleziony w Saragossie ,1964) by Wojciech Has, considered by many to be the ultimate “head” film of the sixties, due partly to the enthusiastic endorsement of Grateful Dead guitarist Jerry Garcia who allegedly saw the film at the 1966 San Francisco International Film Festival, purchased a print, which he then donated to PFA on the condition that he would always have access to screen it.  Garcia wasn’t the film’s only advocate.  Luis Buñuel—who seldom viewed movies more than once—liked this film so much that he watched it three times.  At The Guardian, Xan Brooks quipped: “If Alejandro Jodorowsky had got his hands on The Seventh Seal  it might have looked like this.”

Based on Count Jan Potocki’s early-19th-century novel, adapted by Tadeusz Kwiatkowski for Has’s three-hour extravaganza, Saragossa  is set during the Napoleonic Wars and follows the exploits of a Belgian military officer who keeps getting waylaid by phantasmagoric adventures en route to Spain.  Our protagonist, Capt. Alphonse van Worden (Zbigniew Cybulski, Poland’s “James Dean”) is introduced in the heat of a battle that suddenly swarms onto the screen, as throngs of combatants crowd the frame, seemingly out of nowhere.  He takes refuge in a cabin where he becomes mysteriously drawn to a manuscript.  With a flick of his sword, he turns a page and becomes fascinated with the manuscript’s fanciful illustrations, which become the iterated scenarios of the film.

Saragossa ‘s literary allegiance can be considered either poignant (if quaint), or profoundly necessary at a time when contemporary audiences consider a film based on a comic book or a graphic novel to be a literary adaptation.  Saragossa  is structured as a framed narrative, defined as a literary technique that sometimes serves as a companion piece to a story within a story, whereby an introductory or main narrative is presented, at least in part, for the purpose of setting the stage either for a more emphasized second narrative or for a set of shorter stories.  The frame story leads readers from a first story into another, smaller one (or several ones) within it.

Inarguably a head-scratcher, inscrutable and evasive by design, and deceitful by structure, Saragossa  is a masterwork of nested narratives that thin the membrane between fantasy and reality as stories unfold within stories, realities capsize into dreams, dreams collapse into memories, narrators take center stage then recede, such that by film’s end—as J. Hoberman puts it—the rude awakening serves as the film’s running gag.

The film’s self-reflexivity is, in effect, one more mocking narrator among many.  Characters comment upon their scriptural predicament amidst narratives run amok.  Either by gesture (one character folds his hands in on themselves as if to describe an impasse in the narrative) or complaint: “All this makes me lose my mind,” Alphonse admits.  “I can no longer tell where reality ends and fantasy begins.”

“All these adventures begin simply,” offers Donna Rebecca Uzeda (Beata Tyszkiewicz).  “The listener thinks it’ll soon be over, but one story creates another, and then another.”  To which the film’s philosophical mathematician, Don Pedro Velasquez (Gustaw Holoubek), confirms: “Something like quotients which can be divided infinitely.”

In my opinion Don Pedro—the character I would like to play in this film—has the best quotes.  “Consequentially,” he explains, “if I don’t understand but I can write it down, I approach poetry which turns out to be closer to life than we suppose.  Only an uneducated man who sees a thing every day thinks he understands it.  A true researcher proceeds among riddles.”  Or his pointed soliloquy to Alphonse: “We are like blind men lost in the streets of a big city.  The streets lead to a goal, but we often return to the same places to get to where we want to be.  I can see a few little streets here which, as it is now, are going nowhere.  New combinations have to be arranged, then the whole will be clear, because one man cannot invent something that another cannot solve”, to which Alphonse can only respond, “I no longer follow.”

But follow you will, even if you are confused, or unsure of where you are and what is really happening.  Mieczyslaw Jahoda’s sumptuous black-and-white cinematography is meticulously framed.  Famed composer Krzysztof Penderecki’s score appropriately unnerving.  The scenarios are perplexing and macabre, the women are voluptuous, the corpses gruesome, and the unfolding structure of the film itself its own unique spectatorial pleasure.