Vince Keenan is the author of the best-selling Kindle book Down the Hatch: One Man’s One Year Odyssey Through Classic Cocktail Recipes and Lore. This post marks his inaugural column on cocktails for EatDrinkFilms, “Down the Hatch.”

All the Californians I know have Meyer lemons growing in their yards.  They overturn bowls of the little jewels as they shut off their alarm clocks in the morning, knock dozens of them from the trees as they walk to their cars.  The state is lousy with them.  A cross between a lemon and a sweet orange, the fruit was imported from China by Frank N. Meyer, the USDA’s resident Indiana Jones, in 1908.  Their skins are thin and almost garishly colored, like that of many Californians.  Zing!  (I kid because I love.  And am deeply jealous.  And from New York.)  They also possess a delicate floral fragrance and a taste sweeter than that of normal lemons, making them astonishingly versatile.  To quote my friend, novelist David Corbett, Meyer lemons are God’s way of saying, “I’m sorry.”

Now that they’re more readily available nationwide, I wanted to use them in a cocktail.  My choice was the humble whiskey sour.  And by humble, I overstate the case.  When you’re in the mood for a classic whiskey cocktail, you’re going to ask for a Manhattan or an Old Fashioned, with this one-time staple being the choice of last resort.  I only order them in places where the drink list is suspect, the simplicity of the recipe rendering it foolproof.  David A. Embury, in The Fine Art of Mixing Drinks  (1948), rightly notes that “the overwhelming majority of our cocktails are of the Sour type,” consisting of base spirit, citrus juice, and sweetener.  But he also views the entire Whiskey Sour clan askance because “whisky … is a grouchy old bachelor that stubbornly insists on maintaining its own independence and is seldom to be found in a marrying mood.”  Drinks historian David Wondrich is even more dismissive.  The Whiskey Sour, he wrote, is “the cocktail in its undershirt.” 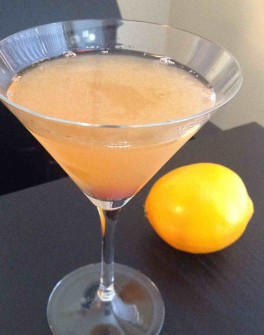 Enter the Meyer lemon to dress it up.  The natural buoyancy of the fruit’s flavor blends perfectly with a good bourbon, and its inherent sweetness means you can scale back the amount of simple syrup while still enjoying its tang.  It revitalizes the drink, now no longer staid but refreshing, the stand-by transformed into a swinger.  Turns out Old Man Whiskey just needs the right comely stranger to blow in his ear.  Or, to put it another way, it’s a reminder that you need only change one element of a cocktail—not even the main one—to generate a pleasing variation.

A more sophisticated gloss on the Whiskey Sour that maintains the California theme is the Frisco—and yes, I know that nickname is a fighting word.  As a child, I was addicted to books like Michael Avallone’s Five-Minute Mysteries and the Two-Minute Mysteries series by Encyclopedia Brown creator Donald J. Sobol.  At the end of each story you’d flip to another page or turn the book upside down for the solution.  (As for the titles: even in my youth I was extremely conscious of time management.)  In one of those books, a crime was committed on a West Coast-bound train with the culprit eventually revealed as a counterfeit conductor.  How did the phony tip his hand?  By referring to San Francisco as “Frisco,” something no railroad professional would do.  The moral never left me: only reprobates use that diminutive.

Don’t hold the handle against the Frisco, which first appeared in World Drinks and How to Mix Them  (1930) by William Boothby.  Before being elected to the California State Assembly “Cocktail Bill” tended bar at several San Francisco hotels, which likely explains the drink’s name.  Boothby’s recipe couldn’t have been simpler: three-quarters “whiskey” and one-quarter Bénédictine, the French liqueur.  For decades the first ingredient was taken to mean bourbon, although of late rye has become the preference.  Over time bartenders began adding lemon juice to act as a bulwark against Bénédictine’s aggressive sweetness, so for that reason Meyer lemons aren’t ideal here.  Balance remains key with this drink; depending on the brand of rye, you may opt for half an ounce less.  (The ratio below uses Rittenhouse Bonded.)

Shake.  Strain into a sour or cocktail glass, but know that everything looks better in the latter.  Garnish with a cherry.

Shake.  Strain into a sour or cocktail glass (see above).  Garnish with a lemon twist.

Vince Keenan is the associate editor of  Noir City, the magazine of the Film Noir Foundation.  His book  Down The Hatch: One Man’s One Year Odyssey Through Classic Cocktail Recipes and Lore , collecting the essays featured in  Slate and  USAToday.com, is a Kindle bestseller.  He writes about cocktails and popular culture at blog.vincekeenan.com.  An ex-pat New York Mets fan, he lives in Seattle.