After first seeing Arthur Dong’s movie FORBIDDEN CITY, USA, I wanted more of the eye-opening stories and images about the Bay Area’s fascinating Chinese American nightclubs. The film gave me a rich feel for the exotic atmosphere and the characters who made it a popular scene for all audiences. Now the book Forbidden City, USA: Chinese American Nightclubs, 1936-1970 has arrived and I cannot stop looking and reading.

In the 1930s, as Prohibition was repealed and the Great Depression came to an end, people wanted a good time. What better place than a nightclub with food, drinks, dancing and a spectacular stage show?  Charles “Charlie” P. Low decided to open the Chinese Village in 1936, the first cocktail bar in Chinatown. He was warned, “Chinese people don’t drink.”  Many felt it was immoral and Chinese women were banned from going there. But it was the white patrons who made it a standing-room only destination, flocking for both the alcohol and the entertainment. Feeling the need for a larger and more spectacular nightclub, Low found a location just outside of Chinatown and a block from Union Square to open his Forbidden City, named after the emperor’s compound in Beijing.  The stories of how he recruited showgirls, the discrimination many of them encountered, and the pride they ultimately experienced with their successes are told in extended interviews with dancers, singers, producers and by Charlie Low himself. Who would have suspected that nude bubble dancer Noel Toy was also a French major at UC Berkeley? Or that one of the nude dancers was initially turned down because she was Irish, only to come back in full Chinese make-up, fooling a club owner into believing she was Asian, and going on to become a sensation. Jackie Mei Ling was a successful ballroom dancer and had a female impersonation act.  And soon both Chinese and other audiences packed the many clubs Dong writes about. There are dozens of wonderful stories previously unknown.

Accompanying all of this are 400 photos, program books, menus, cocktail napkins and much more. 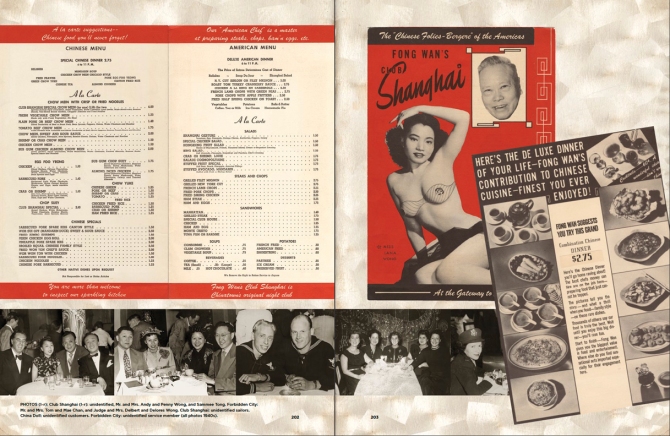 Forbidden City, USA is a sexy feast of images and fascinating stories you will return to often. I hope there will be a second volume.

If you would like a copy of the book, please support your local bookstore or purchase here: http://forbiddencitybook.com.

The Exhibition and Appearance by the Author

A generous selection of the actual items and more not in the book can be seen at San Francisco Main Library, 100 Larkin Street through Sunday, July 6.

“Forbidden City, USA: Chinese American Nightclubs, 1936-1970” showcases a treasure trove of memorabilia chronicling the magic and glamour of San Francisco’s internationally celebrated Chinese American nightclub scene and its performers. On display will be a fascinating array of photos, postcards, menus, programs, and yes, even souvenir chopsticks. Period costumes from stars like Coby Yee, Paul Wing, Dottie Sun, and Tony Wing will also be included. Together they’ll recreate a forgotten era, treating visitors to a dazzling night on the town.

Arthur Dong, who serves as curator of the exhibit, started his collection of nightclub memorabilia in 1985 when he began the research for his award-winning documentary on the Forbidden City nightclub. He has since then become arguably the foremost expert on Chinese American nightclubs.
More on the exhibit: http://deepfocusproductions.com/forbidden_city_exhibit.php