In 1928, inspired by the talkie that changed the world, “The Jazz Singer,” Walt Disney and Ub Iwerks created “Steamboat Willie,” the first cartoon with fully synchronized music and sound effects, demonstrating the potential power and delight of animation.

The ten films in this year’s Animation Show of Shows perfectly illustrate the culmination of that potential. Most of the shorts, curated and presented by Acme Filmworks founder Ron Diamond, require no subtitles and rely solely on that marriage of image and sound.

Nowhere is this synchronization more precise than in the first short, “Beyond Noh” by Patrick Smith, an almost subliminal animation of 3,475 masks presented in four rapid-fire minutes. Every culture in the world seems to be represented, flashing to a hypnotic drum track that, as it begins, brings to mind the sound of film running through a projector, 24 separate images per second that our brains fuse through persistence of vision; an appropriate audio analogy to the cascade of separate images flashing on the screen.

One of my favorites, “Empty Places” by Geoffroy de Crécy, an exquisite and timely film, begins with abstract close ups of looping sequences to the tune of Beethoven’s “Clair de lune.” The images eventually reveal themselves to be the machines of our everyday world—in homes, supermarkets, airports, offices, and discos—mindlessly going about their business. At the same time the actual sounds of the machines steal into the soundtrack, taking us from the abstract into the real world. What isn’t immediately evident but soon becomes the dominant question: “Where are all the people?” Plague? The Rapture?

Gil Alkabetz’s “Good and Better” is a delightfully surreal collection of “portraits” and vignettes set to a haunting waltz tune by Tova Gertner. The whimsical images, presented in a constant morphing of artistic styles and visual gags, combine perfectly with Gertner’s childlike, often whispered rendition of her song; the perfect dance partner for the images.

That marriage of image to sound is taken to the extreme in Jeanne Apergis’ “Zoizoglypes” which has no easy-to-follow narrative and evolved out of the director’s visual and audio experiments. Apergis’ characters—abstract bird-like stick figures resembling notes on a musical staff—brought to mind the drawings of Paul Klee, who was also fascinated with rhythm and music. Her soundtrack consists of audio snippets—typewriters, creaking gears, early warning alarms, and various machine noises—that Apergis recorded and then assigned to individual characters, each having its own distinct sound for each of its actions in much the same way a composer writes for individual instruments in an orchestra.

“Deszcz” (The Rain) also utilizes a simple graphic style in which the faceless stylized figures illustrate the more complex ideas of collective consciousness, the dangers of mindlessly following the crowd, and individual responsibility. This one seems extremely timely.

Maja Gehrig’s “Average Happiness” begins with a dry lecturer explaining graphs and charts, until suddenly those charts and graphs have other ideas. Even the soundtrack (music by Joy Frempong, foley/sound design by Peter Bräker) goes rogue. The results are both funny and phantasmagoric.

“Aurora” by Jo Meuris uses simple stick figure childlike drawings to illustrate her bittersweet story of a little girl who befriends a horse. It’s about friendship, loss, and growing up. It’s amazing that simple lines can pack such an emotional punch.

From Iceland comes Gisli Darri Halldórsson’s “Já folkid” (Yes People), which depicts one Icelandic winter’s day in the life of an apartment block, with the inhabitants going about their daily routine. The only dialog is the word “ja” uttered in a myriad of interpretations. 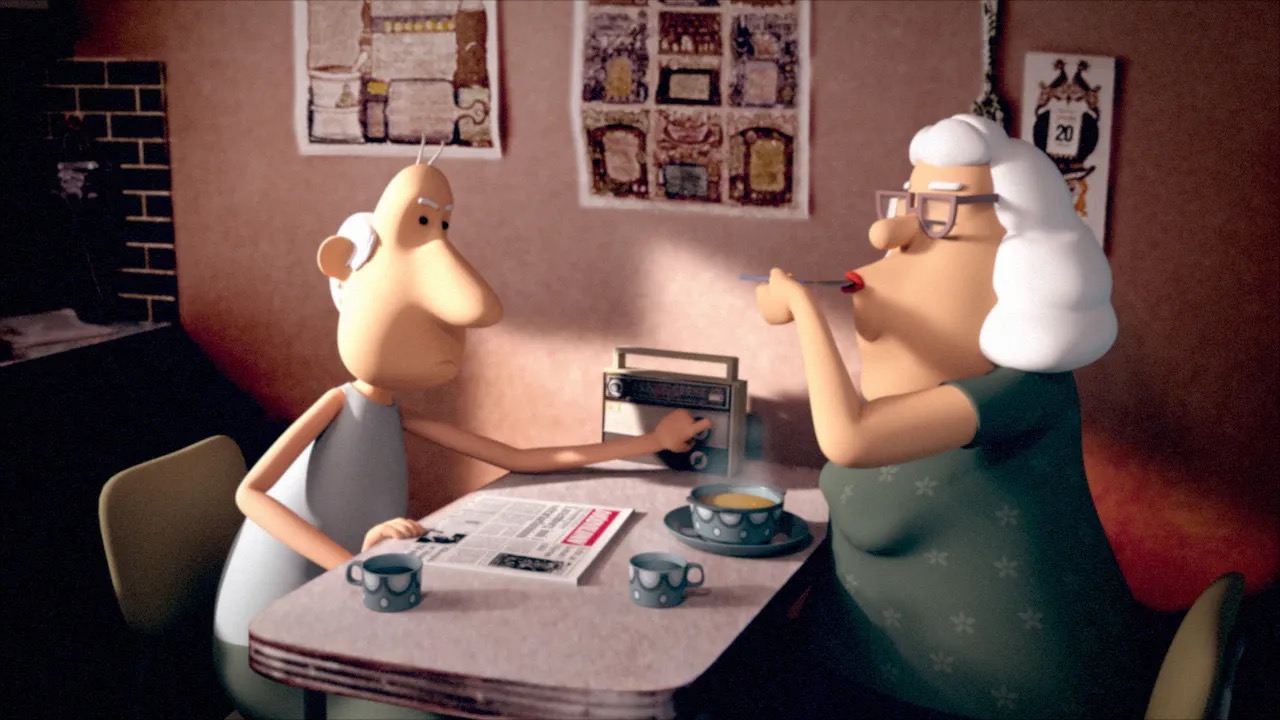 One of the strongest and unique shorts in the show is Russian animator Dina Velikovskaya’s “Ties,” which takes a literal interpretation of “the ties that bind” in exploring the connection between parents and their child who is leaving home.  What appear at first to be simple outlined pen drawings were actually created using a 3D pen that extrudes heated or warm plastic creating individual 3D printed pieces, which she then animated one frame at a time. This painstaking process was ideally suited to this deeply moving film.

The final film in the show, Frédéric Back’s “The Man Who Planted Trees” is based on Jean Giono’s 1953 short story and tells the tale of one man making a difference in the world. The constantly morphing visuals are breathtaking, something the French Impressionist painter Renoir might have produced had he gone into animation. It’s easy to see why it won the 1988 Academy Award for Best Animated Short; how timely this beautiful movie is today.

Now in its 22nd year, this Show of Shows is one of its strongest compilations yet; a much needed elixir in these stressful times and proof that you don’t need an army of animators and a huge budget to create something that touches the heart.

Extended clips from each film in the program (and many others) can be viewed here.

The Animation Show of Shows is playing in theaters only. Check here for a list of current and upcoming engagements.

To stay informed about future shows sign up here.

Robert Bloomberg is a stereo photographer, filmmaker, musician and graphic artist whose award-winning 3D shows have been presented worldwide, including local showings at The Exploratorium, Mill Valley Film Festival, and Oakland Museum. He has been honored with a lifetime fellowship “For Distinguished Scholarship and Extraordinary Knowledge of Stereoscopy” by the National Stereoscopic Association, and served for many years as its Regional Director for Northern California as well as being Stereo Technical Advisor for the Photographic Society of America. His 2D animated film, Animation Pie won Best Educational Film at the Zagreb International Film Festival and was shown on the BBC. He lives in the San Francisco Bay Area with his wife, Marilyn Freund, and two cats (one of whom is famous). Samples of his work can be seen at www.rgb3d.com.