Fish have been swimming onto San Francisco Bay Area menus ever since there were people around to catch and cook them. And Mexican cuisine has been represented in the region ever since Alta California was part of Mexico. But until 1992, although dozens of Bay Area restaurants served a steady tide of petrale sole, halibut, salmon, and sand dabs—not to mention McDonald’s Filet-O-Fish, invented in 1962—and although there were plenty of places to enjoy burritos, enchiladas, and quesadillas, one Mexican fish dish was still just a wish: the fish taco.

The wish came true in September 1992, when a modest neighborhood restaurant, modestly named Baja Taqueria, opened on Oakland’s Piedmont Avenue. At the top of the menu: fish tacos.

Thirty years later, Baja Taqueria still thrives, with an intensely loyal customer base and astonishingly long-tenured staff. In the intervening decades, fish tacos became so ubiquitous in the U.S.—you can find them from Bellevue, Washington, to Washington, DC—that I probably don’t need to describe them. I’ll do it anyway: Flaky white fish, battered and fried, tucked into a soft corn tortilla with some shredded cabbage and a slightly citrus-y, slightly spicy, slightly creamy sauce. Squeeze a lime over it all and ¡órale!—the perfect après-surf (or avec-cerveza) nosh.

It sounds so simple, so obvious. Maybe that’s why it took a complete novice to introduce fish tacos to the Bay Area.

Baja Taqueria’s founder, Jeff Mogalian, had never owned a restaurant. He’d never worked in a restaurant. He was, in fact, a dentist with a practice in downtown Oakland. But for even longer than he’d been practicing dentistry he’d been pursuing some serious hobbies: surfing, cooking, and the Grateful Dead. (How much of a Deadhead was he? He attended more than 175 live shows. And his patients called him the Grateful Dentist.) His most abiding passion, and the one that turned him into a fish-taco pioneer, was eating.

Mogalian’s fish-taco obsession coincided with his dental-school days. “We’d cross the border to go surfing throughout Baja California,” says Mogalian, who is a youthful-looking 66, “and after we surfed we’d eat fish tacos on the beach.” When he graduated from dental school he moved to the Bay Area: nice place to practice dentistry, but no fish tacos. After nine years of dental practice, it was time to fill that gaping cavity. “I decided, OK, time for some fish tacos up here.” He mortgaged his house, maxed out his credit cards, bought two side-by-side restaurants on Piedmont Avenue that were going out of business, and combined them into one cheerful space with a patio in back.

Then he had to figure out what to serve and how to serve it.

Mogalian may have been new to restaurant ownership, but he wasn’t new to good food and serious eating. He’d grown up in L.A.’s San Fernando Valley in an Armenian-American family of “amazing cooks.” “We ate a lot of ethnically Armenian food but also, because it was Southern California, a lot of Mexican food as well,” he says. To research his new menu, he returned to his surfing roots: “I went back to Baja California and ate fish taco after fish taco. I compared all the elements—what made this one good, what made that one good—and put them together into our recipe.” The fish itself would come from Alaska: deep-water pollock that was sustainable, consistent, and non-“fishy” tasting.

That choice alone made Baja Taqueria’s fish tacos a little different from Baja California’s fish tacos. According to a story published in USA Today’s “10Best” in May 2020, fish tacos were originally made from angelito, or angel shark. The idea of battering and frying this local cold-water fish came not from locals but from Japanese fishermen who’d come to the coastal Baja town of  Ensenada in the 1950s and 1960s to ply their trade: they cooked the angelito using the tempura technique from their homeland. Soon enough, Ensenadas discovered they could improve on the original using a crisper frying method and then tossing the result into a warm corn tortilla. Ensenada fish tacos still often use angelito., as well as “shrimp, cod, yellowtail, haddock, flounder … and mako shark,” according to 10Best.

Using those Ensenada fish tacos as his inspiration, Mogalian opened Baja Taqueria with a simple menu: tacos, burritos, and quesadillas made with fish, prawns, chicken, or vegetables. In 30 years, the menu has expanded without deviating from its fish-taco roots. (Fish tacos remain the restaurant’s number-one seller.) The produce is fresh and organic; the restaurant has received a “green” certification for 20 years thanks to its precycling, recycling, and energy-efficiency practices.

“We never really take anything off the menu,” Mogalian says. “When we’ve tried to take something off, our customers practically rioted in the streets.” (One exception: cactus salad. “I thought it was wonderful, but it was probably ahead of its time. Maybe,” Mogalian muses, “it’s time to bring it back.”) Over the years, the restaurant has added beef, calamari, Mexican lobster, wraps, Niman Ranch pork, and the latest addition: birria, the spicy, long-simmered stew associated with the cuisine of the state of Jalisco. It’s traditionally made with goat meat, but Baja Taqueria uses beef. The recipe—a four-hour slow cook—came from the restaurant’s general manager, Coco Roque, who has been with Baja Taqueria for an astonishing 25 years, starting as a cook and working her way up. Employee loyalty may be Baja’s real secret sauce. Of the 13 current employees, a majority have been on the staff for 10 to 15 years; many have family roots in Mexico and Central America. The restaurant lost only two employees during 18 months of Covid uncertainty and limitations. (Mogalian chose to close the restaurant for three weeks in March 2020 “until we could figure out how to keep our employees safe.” Everyone remained on full salary. Until it fully reopened in August 2021, the restaurant kept afloat with takeout orders.) Today, Baja looks much as it did B.C. (Before Covid), with only the absence of the self-service salsa bar reminding diners of how restaurants have adapted to the new reality.

There are still great salsa choices but you need to ask until it is safe to reopen the Salsa Bar.

Not a fish fan? Try the vegetarian Bali wrap, made with black beans, tofu, and peanut sauce.

One other long-standing Baja tradition is still missing as well: the free Monday-evening bluegrass taco jams, which started in 1992 after a bluegrass bar in San Francisco’s Marina district closed. Mogalian, an amateur musician himself, invited some of the bands to cross the bay and perform for tips at Baja. Bluegrass and tacos may seem like an odd combination platter, but not to Mogalian. “They just go together,” he says, grinning. 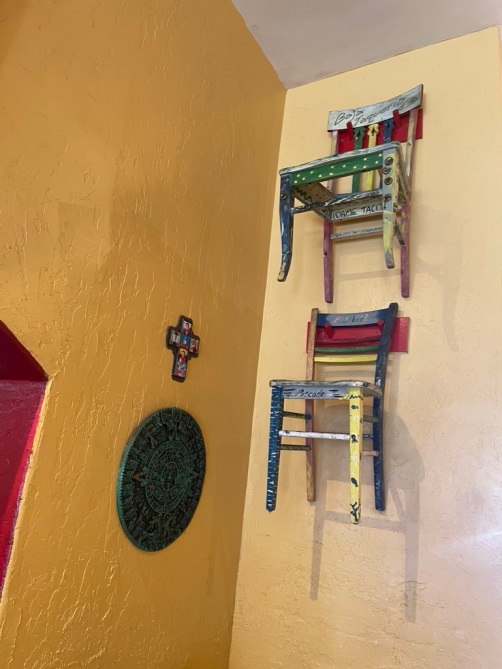 Until the pandemic recedes further and making music in small spaces feels safer, bluegrass taco jam remains on hold. “We do hope to bring it back,” says Mogalian. “We miss having the players and the great community spirit that the shows create.” For now, the community spirit is kept alive by fiercely loyal customers, not just from the surrounding neighborhood but from all over the Bay Area. “Your food makes me joyful,” said one of those customers, unprompted, while I was chatting with Mogalian in the patio. Mogalian broke into a big smile. “I still  love this business,” he said. He has no plans to retire.

Before I left, I asked about the huge portrait Jerry Garcia on one wall of the restaurant. What was the Grateful Dead guitarist/banjo player doing there? Mogalian smiled again. He no longer surfs or practices dentistry, but once a Deadhead, always a Deadhead. Thirty years of Baja fish tacos: what a long, tasty trip it’s been.

The taco jams, suspended since early 2020 because of the Covid pandemic, may return as soon as late 2022. 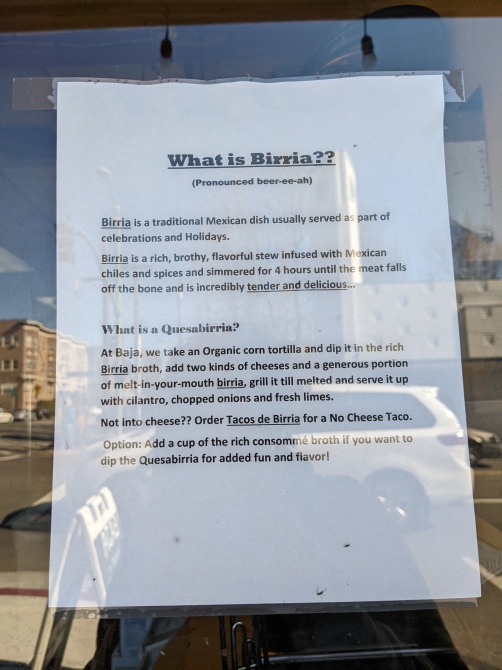