Oy gevalt. How to rationalize living in a daily mashup of these very different worlds is at the heart of the wonderful new documentary Circus of Books, premiering on Netflix April 22.

The first narrative focuses on the young couple, and how their initial West Hollywood-based  business came to be, how and why it prospered, and its role in the 1980’s burgeoning gay liberation movement.

It was a newspaper ad from Hustler publisher Flynt seeking distributors that first caught the attention of the couple, whose previous careers included journalism for her and film special effects/inventor for him. As they explain it, they were driven to find a way to make a living as they were starting their family, and Flynt’s product was flying off the shelves.

Realizing that having their own brick and mortar location would be more profitable, they opened Circle of Books in the same building that was formerly the New Faces bar, where in 1966 demonstrations were held to protest the arrest of men caught kissing each other nearly three years before the better-documented Stonewall uprising in New York. 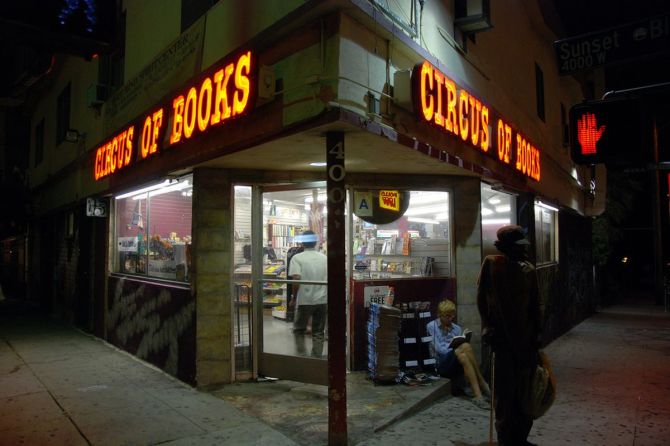 “We bore witness to the epidemic without being part of it,” says Karen. “It was a horrible, horrible time.”

The point is made many times in the film that Karen would certainly have preferred to own another type of business, one that better reflected her own religious values, and that didn’t bring her shame. The stress was incredible.

And as for the kids? “We didn’t want them to know what we did at all,” says Karen, and for years this secret held.  The official answer when asked about the family business was “We ran a bookstore.”

They presented as the perfect family; with Karen as a working mother with three kids, and father Barry the easygoing, sunny dad.

The second narrative, and the real heart of the film, focuses on the struggle that the strong- willed and devout Karen goes through when her college-aged son Josh comes out to the family as gay. The irony is lost on no one. “Up to then, (the business) existed outside of my core values, but I was not prepared to have a gay child,“ she says, noting that homosexuality is an abomination in her conservative religious practice.

Her complicated journey to re-think her theology and where it leads her is an inspirational example of a loving family’s resilience and grace.

The Circle of Books storefront is now gone, due in no small part to the advent of the internet and the cornucopia of options it offers, but the documentary serves as a reminder of a very special time and place in history, where a civil rights movement began.

“Pornography attacks the family,” says a County Prosecutor in Ohio during a Republican administration’s assault on establishments such as the Mason’s.

As the Masons prepared to close Circus of Books, Catherine G. Wagley interviewed Karen, Barry and Rachel for theLAnd.

Visit the reopened and reimagined Circus of Books store website for 18 years and over.