Of the many film festivals I enjoy each year, the San Francisco Silent Film Festival is certainly one of my favorites. I love the fact that the Festival Directors, Anita Monga and Stacey Wisnia, curate my experience. There is only one film playing at a time and all are at the mighty Castro Theatre accompanied by wonderful live music. 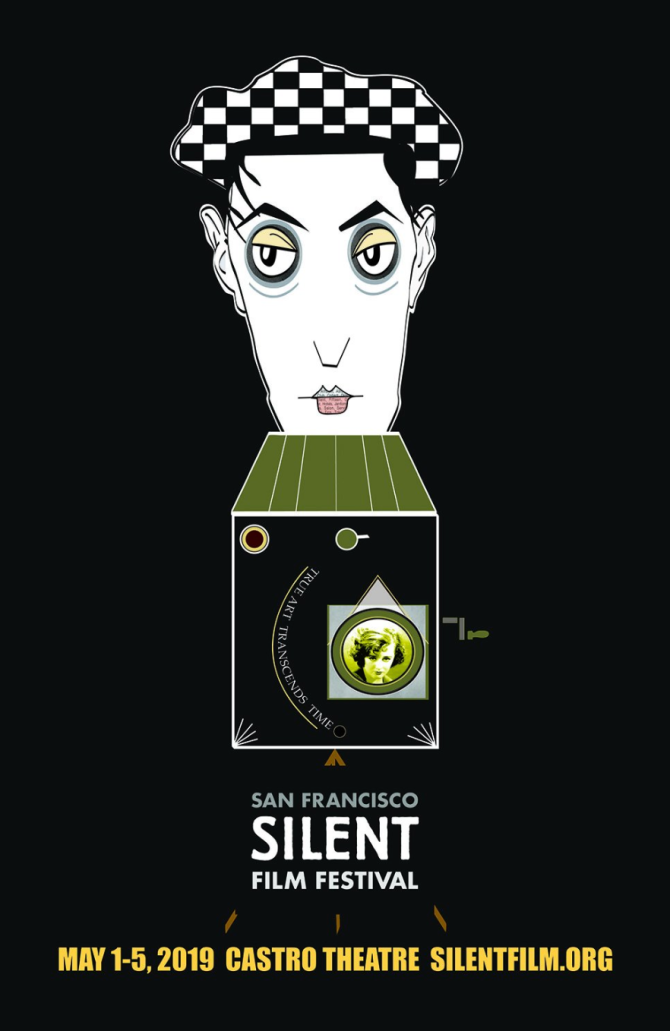 You come in the morning for a 10am show and stay until after the sun goes down…most likely around 11pm. A community develops where you run into friends you haven’t seen in years and make lots of new friends waiting in line (to get in, to buy food or use the rest rooms) or while sitting in the theater before the show starts. As the festival progresses through its five days you realize that this is the closest thing to a movie summer camp.

Bring family and friends, especially those who have never seen a silent film on the big screen with live music and a lively audience. They will become converts. 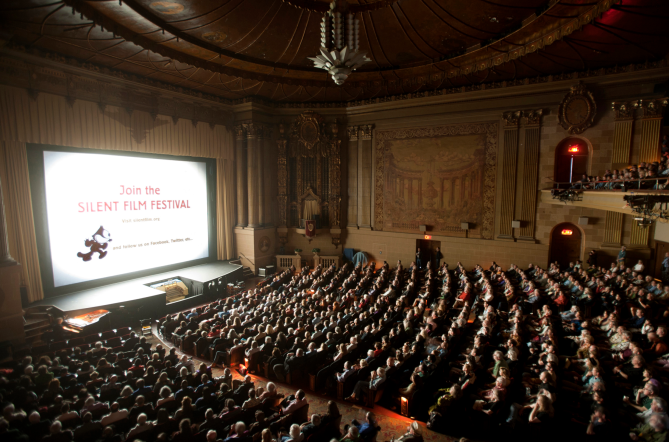 Novices should listen to Artistic Director Anita speaking with Maureen Langen on KGO- 810. The host admits up front that she knows almost nothing about silent movies and she gets the answers many might also want to know. 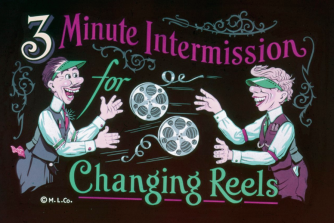 There is not a lot of time between films but enough for a walk outside for fresh air, some sun and/or a cold breeze.  There is no trouble finding a snack in one of the many neighborhood restaurants but make sure they don’t take too long to prepare it if you have little time. Or maybe you’ll have to sacrifice a movie to fit in a regular meal.

Visit to the Mezzanine where film books you didn’t know existed and other movie goodies are for sale from the Niles Film Museum Book Shop and Dog-Eared Books. A series of book and poster signings will be a great opportunity to meet authors and discuss their works.

Getting to your seat a little early is worthwhile as fascinating collections of information and images relating to the film you are about to watch are projected on the big screen. They offer valuable context but no spoilers. Everyone has their own way to approach films they have not seen. Though I have watched hundreds of silent movies I have only seen five in this year’s Festival previously. I plan to see as much as possible, up to six movies a day. But the less I know going in the better for me. I was to be surprised. Others want to know as much as possible before a viewing. Both are valid.

A handy pocket guide can be found around San Francisco. When you attend a film you will be given the 144 page catalog—really a keepsake book filled with essays, background stories, wonderful very rare photos and a delightful surprise on the lower corner of each right side page that really brings the book to life. After films I will read the background articles. Throughout this article we also offer informative essays and extensive program notes to compliment the program book. 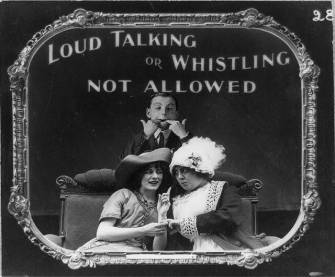 You settle into your seat and you know you are in good hands when the “Voice of the Festival,” Gary Hobish welcomes you with a unique combination of warmth, enthusiasm and humor as he explains the house rules and offers valuable information.

There are 25 five different programs this year, the most ever. The Festival is “Keaton Krazy,” a very good thing indeed. Opening night, Wednesday, May 1 is a stunning restoration of the infrequently screened classic THE CAMERAMAN about which Screenland’s reviewer wrote after the film’s 1928 premiere: “Take practically any scene and try to control your mirth.” Timothy Brock, a specialist in orchestral music from the 1920s and ’30s will conduct an orchestra of students from the San Francisco Conservatory of Music playing his original score. Dennis Harvey wrote a superb article about THE CAMERAMAN for the SFSFF.  John Bengston explains that even though it was set in New York it was mostly filmed in Hollywood and he provides a tour of the locations.

This clip doesn’t start to represent the stunning 4K restoration you will see.

The 2019 SFSFF Award for commitment to the preservation of silent cinema will be presented to Gian Luca Farinelli on behalf of the Cineteca di Bologna before the screening. The Italian archive has taken the lead in restoring Keaton’s entire body of work.  The work they do is impressive and Farinelli will offer an illustrated lecture, “Grand Tour Italiano, 1905-1914” on Wednesday afternoon at 3pm at the Berkeley Art Museum/Pacific Film Archive. This early 20th-century grand tour will wend from Sicily through Amalfi, Rome, Bologna, and Milan before ending in Venice.

Back to Buster Keaton. His hilarious OUR HOSPITALITY will send audiences home in a great mood on Sunday, May 5. Jim Emerson explains things that you will learn from watching this film that “will immeasurably improve your life.”. 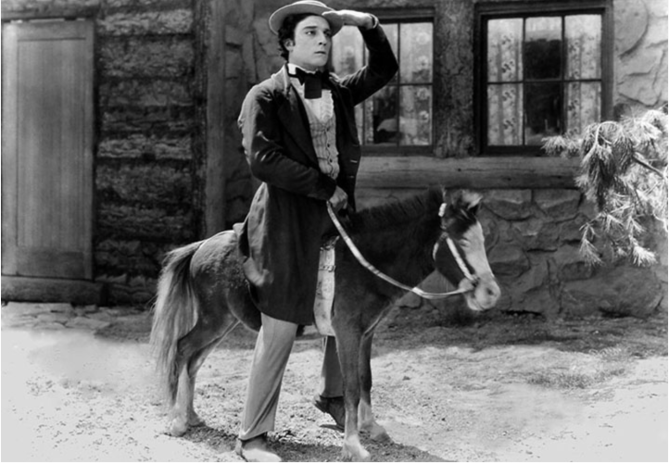 In between there is so much to see and I don’t know where to tell you to start as I plan to be there for 13 hours a day. Film titles link to the Festival page with descriptions and ticket buying options for that movie.

Thursday morning, May 2 starts off with a tradition, AMAZING TALES FROM THE ARCHIVES. Five experts in finding lost films will share astonishing stories of what their detective work has unearthed, not always what they were looking for. It is not to missed (play hokey or call in sick) and it is FREE admission.

The first feature of the day is unseen by me but I can’t wait to enjoy this early pairing of Gary Cooper and Lupe Velez in WOLF SONG. An outdoor adventure filmed in the California Sierras (pretending to be the Rocky Mountains) it is said to have an “on-screen romance that positively zings with electricity” between these two real life lovers. I urge you to listen to Karina Longworth’s podcast about Lupe Velez and her love life. And hear Velez singing “Mi Amado” to promote the film. Read Kevin Brownlow’s notes for the Le Giornate del Cinema Muto in Pordenone.

Thursday afternoon continues with two well-known but rarely screened classics: Ernst Lubitsch’s satirical THE OYSTER PRINCESS  (read more about it on Senses of Cinema and Movies Silently), and the controversial EARTH by the great Soviet director Aleksander Dovzhenko. Senses of Cinema essay and in-depth contextual explanations. 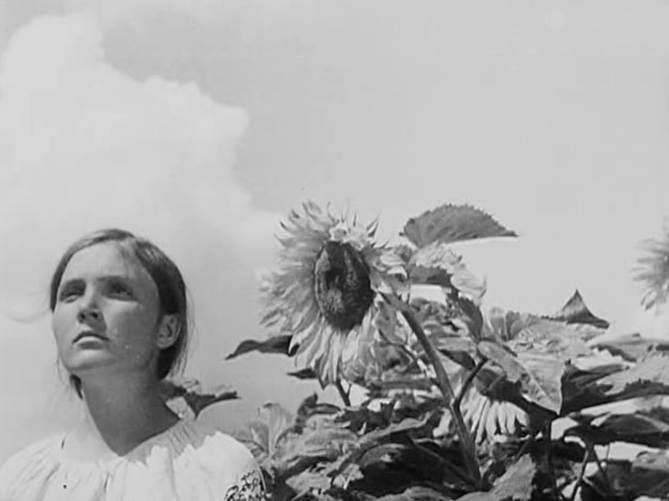 And then there are  two must-see discoveries.

THE SIGNAL TOWER is a major restoration project by the SF Silent Film Festival and Photoplay Productions. The program note promises “The stakes are high in this thrilling Universal Super-Jewel set deep in the redwood forest of Mendocino on the Fort Bragg railroad line. Sally is the beautiful wife of a signal towerman  and devoted mother to their precocious darling boy . These are decent, hardworking people just trying to make ends meet when their simple, idyllic life is disrupted by the appearance of an oily outsider (Wallace Beery) with his ne’er-do-well mustache and slick city ways. His eye for the ladies respects no vow and he quickly turns his predatory attentions to Sally. Add a runaway train on a dark stormy night and the story picks up some serious steam. Directed by Clarence Brown before he helped jumpstart the career of a young Swedish actress named Garbo at MGM. Brown’s gifts for creating fleshed-out characters and evocative atmosphere are on full display – not to mention fast-paced action that’ll make your heart race in locomotive time!”

The program will be introduced by one of our favorite film friends, Kevin Brownlow of Photoplay Productions, most famous for his many years of work on Abel Gance’s NAPOLEON but responsible for so much more beyond these movie restorations including his many documentaries and books about the history of film. A few week’s ago Brownlow did a Maltin on Movies podcast and I was only saddened that it lasted a mere one hour because the stories that he told about how he met the greats and the forgotten of Hollywood were wonderful and I urge you to listen before you see Kevin. I have most of his works and listening to this inspired me to reread one of my first film book treasures, “The Parade’s Gone By.”

OPIUM is from forgotten director Robert Reinert and is described in the program notes: “Set in China, India, and England, it tells a story of addiction, love, and vengeance against a backdrop of opulently imagined worlds, both terrestrial and of the mind. Modern audiences will be most impressed by the stunningly crisp deep-focus photography of cinematographer Helmar Lerski and the trippy drug scenes featuring garland-bedecked nudes of both sexes romping carefree in a forest glade.”

And that is just the first full day.

Every film will be accompanied by an incredible array of international musicians from soloists to orchestras. 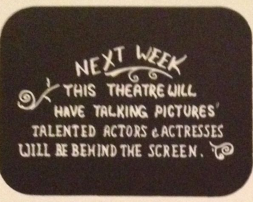 These are not “talking pictures” but two films on Saturday, L’HOMME DU LARGE and L’INFERNO will have narration translating the foreign intertitles by the actor Paul McGann (DR. WHO, WITHNAIL & I).

I could go on for pages about the many terrific photoplays showing Friday, Saturday and Sunday.

I urge you to visit the Festival’s website and look at the day-by-day schedule for details and to buy tickets. An overview of the festival with brief descriptions has been provided by writer Thomas Gladysz on his Louise Brooks Society site.   You will learn about movies from not only the United States but Czechoslovakia, Italy, Germany, Bali, France, Japan, India, and Sweden. 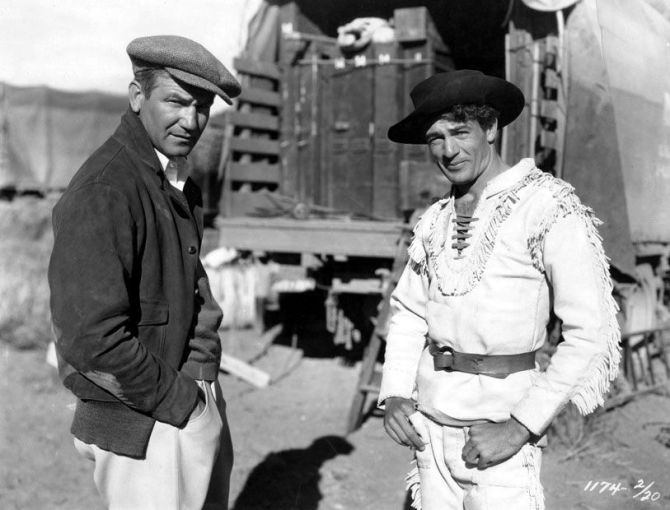 In addition to Brownlow and Farinelli, films will be introduced by a host of experts including actor Paul McGann, restoration wizards Serge Bromberg and Rob Byrne, film writer Joseph McBride, Mike Mashon from the Library of Congress, The Czar of Noir Eddie Muller, William Wellman Jr. and many film experts and scholars. And because the Festival team are especially thoughtful, all introductions are signed for Deaf and hard of hearing members of the audience and are a pleasure for anyone to watch.

Mick LaSalle previews the Festival for the San Francisco Chronicle.

Since our headline states “A Picture os Worth A Million Words” we are going to let some images entice you. (And please note the print quality and soundtracks on the clips below do not represent the superior quality of what you will experience at the Festival.) 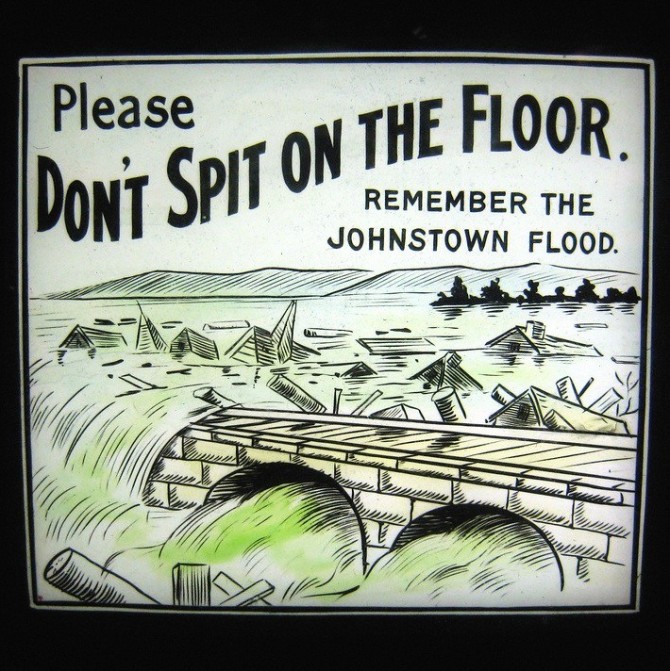 JAPANESE GIRLS AT THE HARBOR   Read more about director Hiroshi Shimizu and the film. 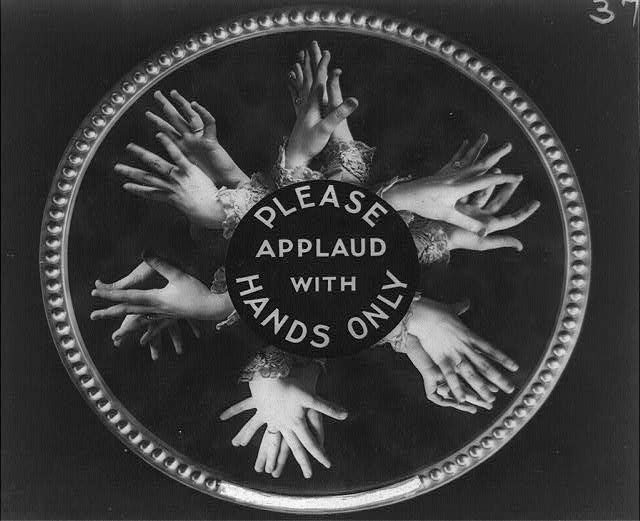 Roger Karl in L’HOMME DU LARGE (aka THE MAN OF THE SEA)
Directed by Marcel L’Herbier.  Read the Pordenone essay.

L’INFERNO with musical accompaniment by the Matti Bye Ensemble with intertitle narration by Paul McGann.  In depth essay. WEST OF ZANZIBAR    Brian Darr in Senses of Cinema 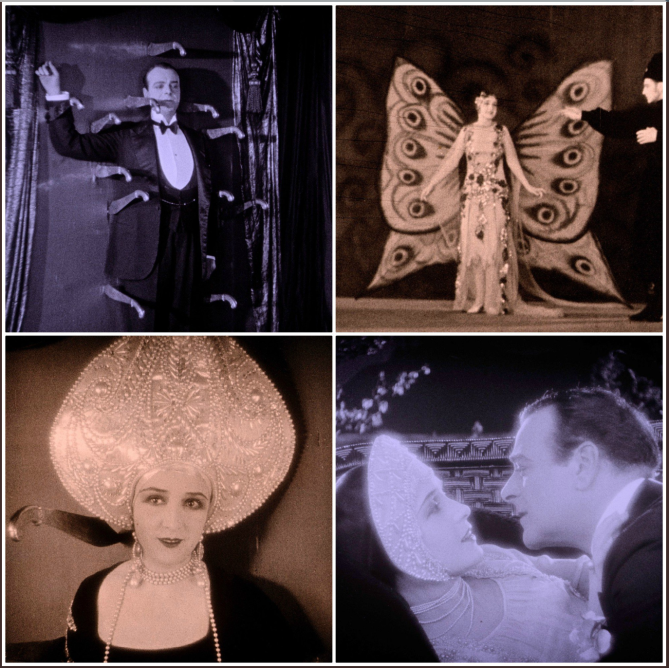 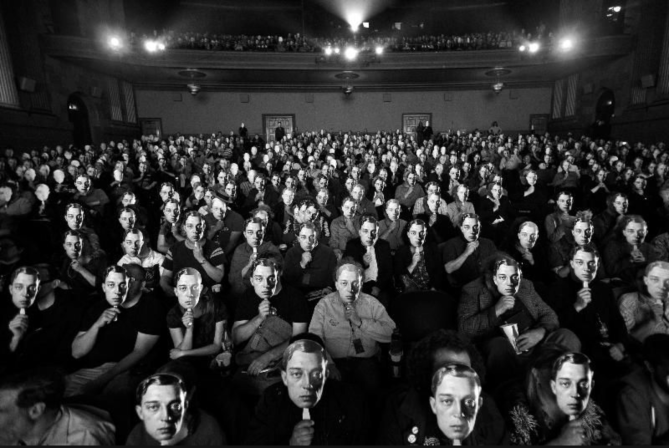 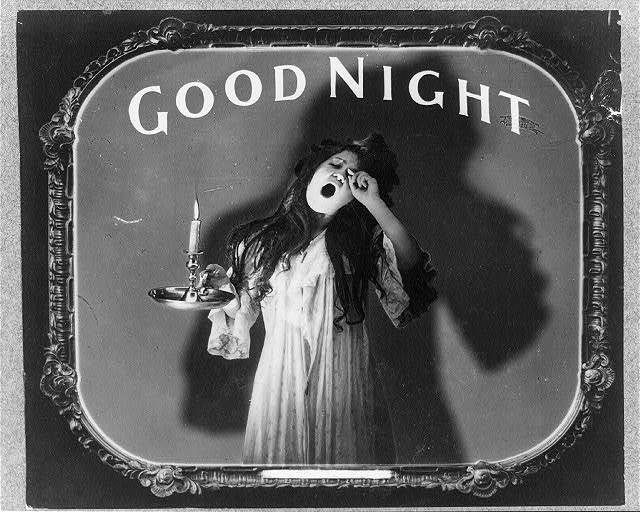 2 thoughts on “A PICTURE IS WORTH A MILLION WORDS”