Academy Award-winning Bay Area filmmaker Allie Light steps into the world of narrative film after 40 years of making documentaries. ANY WEDNESDAY, the short drama she wrote and co-directed is a compelling story that tackles the subjects of dementia, PTSD and the human condition. Light, who is 83, along with her late husband Irving Saraf, won an Academy Award back in 1992 for their documentary IN THE SHADOW OF THE STARS, which profiles members of the San Francisco opera chorus. Her move into narrative film came as a way of dealing with her own grief after her Irving’s death.

ANY WEDNESDAY will have its regional premiere screening at the Mill Valley Film Festival on Saturday, October 13, 2018, 4:30 PM, at the Christopher B. Smith Rafael Film Center, as part of the program An Afternoon with Eleanor Coppola and Allie Light. Guests expected in person, representing ANY WEDNESDAY, will be co-directors Allie Light and Patrick Stark, producers David Lundstedt and Julia Hilder, and actors Mary Black and Shane Dean. Eleanor Coppola will present her TWO FOR DINNER and they will talk about the transition from documentary filmmakers to the dramatic narrative form.

Julia Hilder sat down with Allie Light to find out more about the movie and her transition.

Where did your idea for ANY WEDNESDAY originate?

ANY WEDNESDAY is the result of a particular time in my life—that time of entering old age and losing my partner, Irving Saraf. After his death I wrote 4 scripts on the subject of grief and desire in old age. ANY WEDNESDAY is the first of the scripts to become a film. What would happen, I thought, if two people came together who would never meet in life? They’re thrown together and each of them is on a journey that will lead to the loss of memory, or the loss of reality, or the grief that comes from things that have happened to them.

Describe what the movie is about:

A 79-year-old woman in the early stages of dementia has a flat tire. A 25-year-old homeless Iraqi war veteran approaches her and offers to fix her tire. He asks for money for his work, and then asks for a ride. Agnes doesn’t know how to say no, and she doesn’t know that she is driving him to score weed. It soon becomes obvious that C’Mo suffers from PTSD, and the two bond over their conditions—for as C’Mo says, “You can’t remember, and I can’t forget.”

How did you go about getting ANY WEDNESDAY Made?

I met my co-producer, Patrick Stark, through a mutual friend. He read the script and said, “let’s make this movie.” Julia Hilder, who co-produced the film, and I met with Patrick in Vancouver BC where he lives. We worked out a deal to shoot the film in Vancouver because Patrick had film production contacts and we knew we could take advantage of incentives that keep costs low.

How were the two actors working together?

A Canadian actor, Mary Black, plays Agnes. Shane Dean plays the part of C’Mo. The two actors have amazing chemistry. As circumstances change, their feelings for one another develop and change also, and you never think it isn’t genuine. As the story begins, C’Mo is gruff. Agnes doesn’t know who he is or what he might do. She’s frightened. She’s riding with a total stranger. He buys weed and smokes it; she begins to get a contact high. They loosen up and then C’Mo works his way into her heart.

Talk about the making of the film:

We had a crew of 30 people and a cast of six. Our initial shoot was half a day and four nights in Vancouver. They were cold March nights with rain, which was good since the film takes place on a stormy night in Austin, Texas. Halfway through filming on the last night it snowed, which it rarely does in Texas, so we returned six months later to shoot the final scene.

The shoots were difficult because our characters spend much of their time in the car and we used what’s called a Poor Man’s Process to make it look like the car was really moving when it stayed stationary. We also used rain towers to put rain on the car windows and our lighting crew had to produce lightning and the presence of car lights moving past. 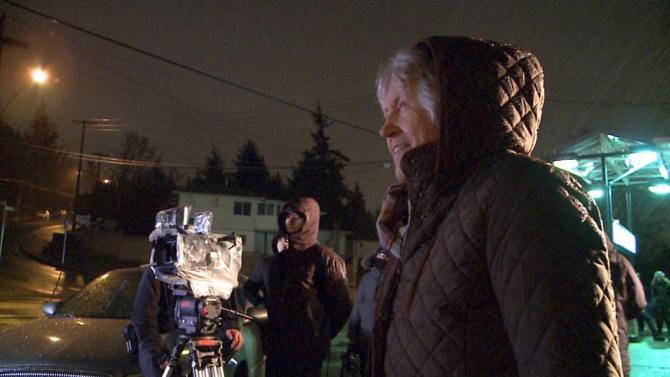 You spent 40 years making documentaries so what was it like working with actors?

I had never directed actors and I was terrified to try. I made my friends crazy saying that I couldn’t do it, that I didn’t know how. They suggested books or the Internet to teach myself. Yet the first day that we began casting I totally loved the process and I lost any fear. Good actors do what you ask them to, and often better than you thought. Directing is very exciting. I’ve waited all my life to be a director.

How is this film inspired by true events?

It’s important that people know I had a blank slate to work on. I created the scenes and the dialogue –though when the actors spoke my words, they became theirs, not mine—yet there is a real story behind the imagined one. There was a real Agnes and a real person who rode in her car. The mother of my son-in-law went to meditation class one night and had a flat tire. She was gone for hours and didn’t say much when she got home except a man fixed her tire and she gave him a ride to buy something.

Iraqi War Vet C’ Mo Suffers from PTSD. Talk about the importance of it in the film:

PTSD is a serious issue in our country. Twenty-two war veterans take their lives each day. We can’t continue to ignore this. When we see a C’Mo on the streets holding a sign, asking for help, we mustn’t ignore him. He represents a generation of men and women who were traumatized by war, who were promised services not given, and now have no work and no way to continue their lives.

What do you hope people take away from watching ANY WEDNESDAY?

I want ANY WEDNESDAY to speak for those grieving for who they once were, for the pain of becoming displaced, for men who stand in the rain like C’Mo holding a sign that says help me, or those in the world like Agnes who realize they are losing the person they once were. Agnes tells C’Mo that sometimes she can’t remember her husband’s name or if she even knows him. I hope people who see this movie are as touched by it as we were while making it.

Light-Saraf Films Website with bios of Allie and Irving and information about their many wonderful movies.

Watch “Behind the Scenes on the Making of ANY WEDNESDAY.

Allie Light is a Bay Area Academy Award and Emmy Award winning documentary filmmaker. Light’s credits, with her late partner, Irving Saraf, include: In the Shadow of the Stars, (Academy Award); Dialogues With Madwomen, (Emmy; Freedom of Expression Award, Sundance Film Festival); Rachel’s Daughters: Searching for the Causes of Breast Cancer, (HBO) and 15 other documentaries. ANY WEDNESDAY is her first narrative film. 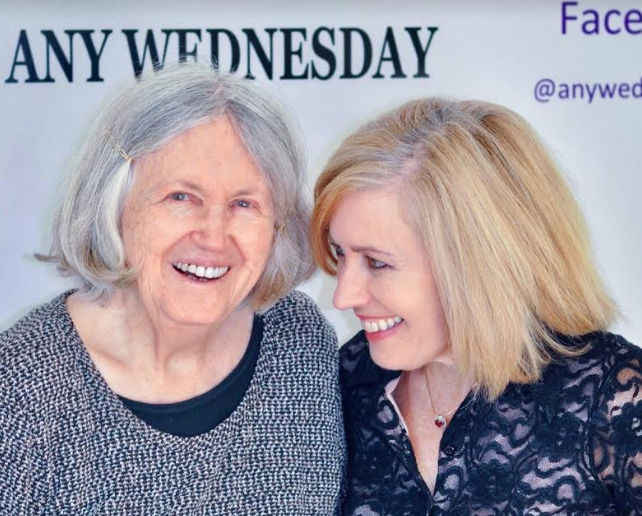 Julia Hilder is a media consultant and producer living in Austin, Texas. After a career anchoring and reporting in television news,  Julia now heads her own video production company Hilder Productions. She joins her mother, Allie Light, as co-producer on ANY WEDNESDAY.