By Daniel Raim and Jennifer Raim

Husband and wife team Harold and Lillian Michelson were a secret weapon for many Hollywood producers, directors, writers, and production designers. Harold was one of the most talented storyboard artists in Hollywood, creating images for everything from The Ten Commandments (1956) to The Fly (1986); he also became an accomplished two-time Academy Award-Nominated production designer and art director on Star Trek: The Motion Picture (1979) and Terms of Endearment (1983) respectively. For her part, Lillian was one of the most talented and sought after film researchers in Hollywood for decades, providing a real-life reference for the designs of The Birds (1962), Rosemary’s Baby (1968), Fiddler on the Roof (1971), Chinatown (1974), Rocky (1976), Full Metal Jacket (1987), and hundreds more.

Lillian’s research very often formed the basis for Harold’s conceptions and designs, along with the designs of other art directors and production designers who utilized Lillian’s unique talent for hunting down information. Together, Harold and Lillian’s work influenced hundreds of Hollywood’s most acclaimed classic films. They loved their work, they supported each other, and they never sought out the spotlight.

We frequently hear the adage that cinema is a collaborative art form. However, when the film is finished and the time comes to attribute praise, much of that collaboration is lost. Although Lillian’s research career spanned almost 50 years and hundreds of movies, and she was revered for being the best at finding information that “you weren’t allowed to see,” Lillian received just seven on-screen “Research” credits. In Lillian’s opinion, research is “lost in the mist of memory”: “We’re the first ones who are asked to do anything on a picture when it’s really ‘in utero,’ so to speak, and there are so many fits and starts in getting any project off the ground—in fact, to me it’s a miracle that any movie is ever made—that by the time the completion comes around, we’re totally lost from view… It just seems that we do a rather useful thing, and we should be remembered.”

Storyboard artist Gabriel Hardman (Inception (2010), Logan (2017)), describes one of the difficulties of the position: “You’re in a very strange place where you are working with the director, basically, on the highest level of the film, yet you’re also below the line. You’re not one of the key players…as far as everybody else is concerned.”

Harold’s color illustration for The Birds

Harold was fortunate over the course of his career to work on several films where he had the unusual experience of being considered a key player. Most notably in 1962, Alfred Hitchcock asked Harold to come to Bodega Bay where they were filming The Birds (1963). Harold learned a great deal from the master of suspense about how to tell stories visually, and took away a valuable lesson when one of his sequences was rejected for being an anti-climax. However, Harold had many ideas for how to “enhance” the script with images, and Hitchcock accepted many of his ideas and sequences. Art director Norm Newberry noted: “Each one of Harold’s frames told us exactly what we were going to see, with which lens, and what angle the camera should be pointed.”

Hitchcock’s cinematographer, Robert Burks, worked very closely with both Harold and production designer Robert Boyle. The three men would meet up every night in Bob Burks’s hotel room to talk about the next day’s work. Bob Burks set up almost every shot in The Birds and Marnie according to Harold’s storyboards.

Harold’s storyboard for The Birds

Several film critics, (including Bill Krohn, author of the book “Hitchcock at Work”), believe that Hitchcock pushed the boundaries of cinema grammar in The Birds, often blurring the lines between subjective and objective shots. Harold’s storyboards on that picture, as well as for the subsequent film, Marnie (1964), give us a window into how Harold’s ideas (buoyed by Lillian’s research) enhanced Hitchcock’s vision. Hitchcock surrounded himself with genius level collaborators and Harold (who did not receive credit on either The Birds or Marnie) was no exception.

Three years later, Harold was at the top of his game, having just completed two Hitchcock pictures. In The Graduate (1967), director Mike Nichols and cinematographer Robert Surtees loved Harold’s storyboards and used them for almost every camera set-up. Again, with Lillian’s research help, Harold confidently “dreamed up” shots that would become some of the most iconic images in American cinema history.

Harold’s storyboard for The Graduate

In the documentary, Harold explains how he conceived the famous leg shot: “I’m trying to get as many different compositions as I can without making it a dull two-headed monster or a two-headed screen of just two people talking and cutting back and forth, which makes it absolutely deadly. I don’t care how good the dialog is. In The Graduate there was this scene, and I decided to have in the foreground the angle of her leg, which created a triangle, and put Dustin Hoffman in between. We saw him immediately, and you also got the feeling of a sexual escapade. It worked. They did it that way.” (Lillian claims that Harold was a “leg man.”)

These anecdotes highlight one more tension of the position: that sometimes “the line between directing on paper and who’s responsible for the thing that’s on the screen is ambiguous,” says Hardman. As Harold says, “Through the years, I’ve worked with many, many directors… I found that among all these people there are some that are visual; others that are sensitive to story, and depend on somebody for the visual.”

Harold elaborates in the documentary: “It’s your ideas that they want; they don’t want your style. In reality, and I won’t say this, it’s like directing. You have to have all this knowledge of directing just for this piece of paper. After that, they can do whatever they want with the piece of paper, but all these truths are part of the art of cinema.” 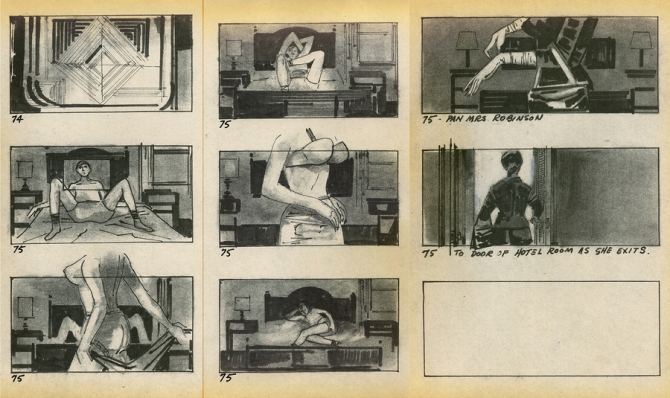 Harold’s storyboards for The Graduate

Therein lies the fundamental awkwardness: that sometimes (as both Harold and Hardman have experienced) a director depends on someone else for the visual, which necessitates a recognition that the image composition is sometimes the brainchild of the storyboard artist, not the director or the cinematographer.

However, as Hardman explains, while it is true that storyboard artists often don’t get enough credit for what they bring to a film, “we also don’t deserve authorship over the movie. The director…made the decision to use this or that. They’re the final arbiter of everything. …[T]hey are the person in charge, and they are the one who’s going to take the fall for the movie, and so they do deserve the credit for it.” Harold expresses similar sentiments when discussing Mike Nichols and The Graduate, definitively stating: “I mean, he made it.” In that same vein, Harold’s reverence for Hitchcock was unparalleled: “This man, to me, was cinema.”

Over the course of his 50-year career, Harold was fortunate to work with some of the best directors in Hollywood. Completely under the radar, Harold shared his genius, his wit, and his innate cinematic sensibilities with many directors: beyond Alfred Hitchcock and Mike Nichols, Harold worked with Billy Wilder, Robert Wise, Stanley Kubrick, Dalton Trumbo, Francis Ford Coppola, Mel Brooks, Danny DeVito, and James L. Brooks, among many others.

As Mel Brooks reveals, “Nobody knows about the little goodies that Harold Michelson could give you to make you look like a great filmmaker.”

And this, as they say, is the point. While directors, cinematographers, and stars may stand out and receive praise (rightly so), there are a multitude of other people like Harold and Lillian whose contributions are unheralded, and yet immense. Their work enhances the indelible emotional impact, the cinematic spectacle, and the truths that the best American films give us.

Perhaps it does not really matter who came up with which shot. What does matter is that we recognize and appreciate the contributions of hard-working behind-the-scenes masters that lend their lives and their genius to help create the movies. Harold and Lillian: A Hollywood Love Story highlights two of them.

Harold and Lillian: A Hollywood Love Story is a New York Times Critics’ Pick and currently playing at:

Opens May 26th in Chicago at the Gene Siskel Film Center. Click here for more information.

For other upcoming openings look here.

Daniel Raim is an Oscar-nominated film director born in Israel and raised in the US. In 1997, Daniel attended the American Film Institute Conservatory in Los Angeles where he studied under one of Alfred Hitchcock’s most esteemed collaborators, Production Designer Robert F. Boyle. Daniel is known for his “informative and deeply moving” (Variety) trilogy of documentaries about unsung heroes of Hollywood’s Golden Age. His debut film, an intimate profile on Boyle entitled The Man on Lincoln’s Nose, was nominated for the 2000 Academy Award for Best Documentary Short Subject. His second film, Something’s Gonna Live (2009) was critically acclaimed during its theatrical release, and received a Los Angeles Times Critics’ Pick from Kenneth Turan. Daniel is the Writer/Director/Producer/Co-Editor of his third film, Harold and Lillian: A Hollywood Love Story that premiered as an Official Selection of the 2015 Cannes Film Festival, and nominated for The Golden Eye Award.

Daniel has a passion for education, and in 2016 he embarked on an academic tour through India, where he screened his trilogy and lectured on cinema literacy and the art and craft of documentary filmmaking. Daniel is currently creating a series of short films for the Criterion Channel on FilmStruck, including a new piece on Yasujiro Ozu. You can follow Daniel’s work at: AdamaFilms.com and HaroldAndLillian.com