The Dick Fregulia Trio will perform a “Tribute to Bill Evans” before the bay area premiere of the new film Bill Evans Time Remembered on Saturday evening, May 13th at JB Piano Company. Advance tickets, $15 online at JBPiano and $20 at the door.

Here he remembers meeting Bill Evans and reviews the new documentary about the great jazz pianist. 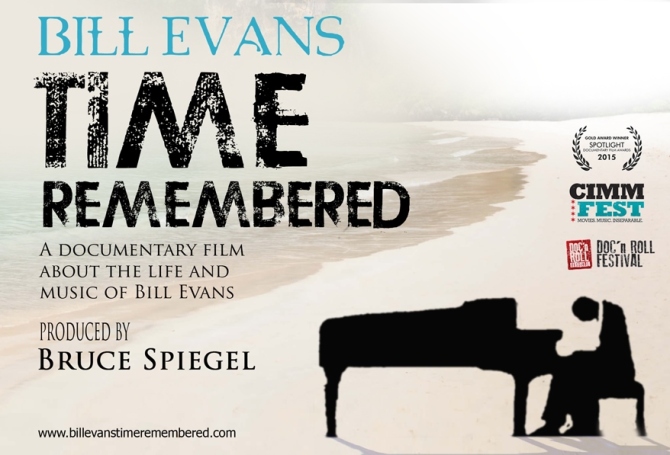 (listen while you read)

After getting through a couple of tunes I ultimately decided I’d rather go over and chat a bit. Linda was a friend and, in fact, had sung with me at the Square. She introduced me and we exchanged  a few comments.  Bill offered up that he and Linda had, in fact, been talking about the plight of the background pianist, concluding that if he were playing the Yamaha piano against the wall people in the restaurant would be just as loud and seemingly indifferent to the music as they were being for me.  So we traded places: Bill went to the piano, I stayed at the bar with Linda, and it didn’t make any difference.

We suddenly had this new overlap of experience to go along with the similarities of both having grown up white, 1950’s middle class pianists drawn to the  exotic world of jazz. Because it was the 1970’s and jazz had by now been almost totally beaten down by Rock and Roll and related pop styles, we also shared the indifference of the mainstream to our music. But that only made Bill more heroic, the fact that he had successfully imposed himself as a jazz star.

“Perhaps it is a peculiarity of mine that despite the fact that I am a professional performer, it is true that I have always preferred playing without an audience.”

The Time Remembered documentary opens  with a segment from an interview Bill did with his brother Harry, a music professor at Southeastern Louisiana College. Bill explains how the search for truth and beauty are  the core values to his musical philosophy, so his brother asks how he managed to evolve into professional success as a pianist. Bill replies that by nature he is very shy, that he does not seek out attention, but that he was dedicated to serious and honest work at his craft.   “Ultimately I came to the conclusion that all I must do is take care of the music, even if I do it in a closet. And if I really do that, somebody’s going to come and open the closet and say, ‘Hey, we’re lookin’ for you.’ ” 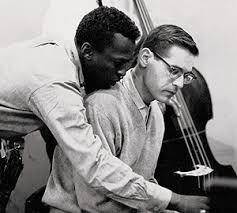 The film traces Bill’s evolution through his college years and early years in New York,  leading to the first trios, his time with Miles and the Kind of Blue album, the change of his trios after the death of Scott La Faro, and the wide variety of musical contexts in which he played up to his untimely death in 1980 at the age of 51. The cornerstone , however, was always his jazz trio, a musical format he transformed from essentially a piano lead with bass and drums support to a conversational 3-way creative process that both followed his lead and encouraged new directions and dynamics dictated by the bassist and or drummer. The film traces the evolution through three great trio periods: the Scott La Faro/Paul Motian trio, the middle trios mostly but not exclusively anchored by Eddie Gomez on bass and Marty Morrell on drums, and his concluding trio with Marc Johnson and Joe LaBarbera. 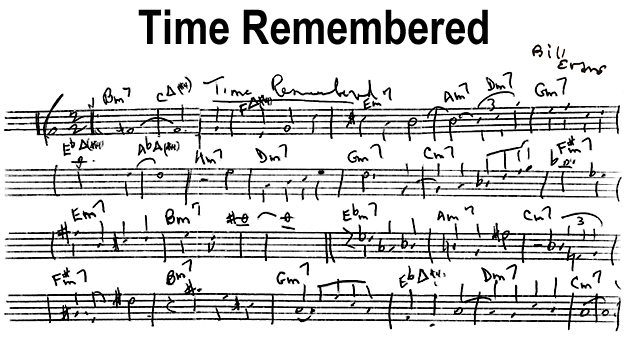 It also traces Bill’s  “domestic” relationships with Peri, Ellaine, Nenette, and Laurie, and how intimately his personal life interweaved with his tragic and extensive addiction to drugs, particularly heroin. The description of his death is poignant and inevitably connected to everything. In a way it is a beautiful film about a wonderful jazz pianist, but it is also a painful film and sometimes difficult to watch.

“Technique is the ability to translate your ideas into sound through your instrument. This is a comprehensive technique…a feeling for the keyboard that will allow you to transfer any emotional utterance into it. What has to happen is that you develop a comprehensive technique and then say, Forget that. I’m just going to be expressive through the piano.” Bill Evans

This is where Bill and I differed. I became addicted to distance running for highs, maintained a full-time job as a high school teacher, played gigs as much as the market would allow, raised a family, made recordings from time to time, and so far outlived him by 25 years. But at best I remain a Triple-A minor league jazz pianist.

I did realize something interesting about 7 years ago, though. It suddenly came to me that Bill Evans had been dead for 30 years. My god, how did that happen?  Many people – friends, fans, and musicians – had commented over the years how similar my style was to Bill’s….not so much as a pure technical transposition but largely for my touch, my sense of lyrical phrasing,  my adoption of a number of Bill’s phrases, and for my attitude. It became clear that I should put together a Bill Evans Tribute Trio, an idea underlined by a recent gig I had played with a Scott La Faro inspired bassist named Piro Patton, who loved my use of “Bill Evans triplets.” I contacted Bill Moody, the jazz drummer who also writes jazz mystery novels featuring a lead jazz pianist character suspiciously named Evan Horne. The three of us started putting together set lists of Bill Evans material and got several gigs at Osteria Divino in Sausalito.  That led to a chance to play at Bach Dancing and Dynamite Society, a fine concert gig that was fortuitously recorded by Adrian Wong. That led to a CD entitled Re: Person I Knew.

We managed to get a few more gigs over the succeeding years, but the reality was that we were destined to stay mostly in the closet. Just recently, though, opportunity knocked. A piano friend of mine, Neil Adler, got wind of a new Bill Evans documentary that was being screened at a small college in Vancouver, hosted by Bill Evans’ last girlfriend, Laurie Verchomin.  He flew up to the event, made the contacts, loved the movie, and came back to the Bay Area encouraging the local community to stage a screening. I opened the door, recognizing the opportunity to help renew Bill’s legacy, publicize my favorite piano store, and create a gig for my trio.

So come on over to JB Piano in San Rafael Saturday evening, May 13, and celebrate Bill Evans.  Doors will open at 6:30 and my trio will start the evening with a set featuring the repertoire and style of the Bill Evans Trio. This will be informal and clubby, with plenty of opportunity to move about and socialize. If you don’t listen to everything it really won’t make any difference, as long as you enjoy the ambiance. At 8 p.m. we will all sit down and watch the feature length documentary projected on a professional-quality 10-foot movie screen specially installed for this event The evening will end with a half hour to unwind, converse, and perhaps touch a few more keys.

More performances and bonus footage/outakes below. 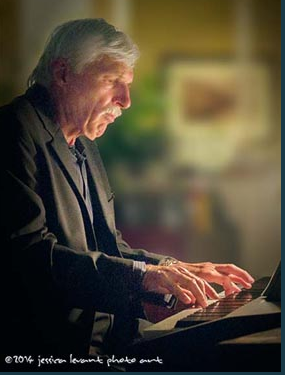 Dick Fregulia has been playing jazz piano gigs in the San Francisco area for half a century, as a soloist, sideman, accompanist to jazz vocalists, and leader of his own jazz combos. For 35 years he was featured Thursday nights at Washington Square Bar and Grill in San Francisco’s North Beach. His early influences were Ahmad Jamal, George Shearing, and Oscar Peterson, leading to a lifelong admiration for Bill Evans as a trio pianist and Art Tatum as a solo pianist.  In recent years he has focused on expanding opportunities to perform with his piano trio and his Good Vibes Quintet/Quartet/Trio

As a “jazz recording artist” Dick created Blue Koala Records in 1978 with the highly acclaimed solo piano LP, Sunday Morning at Washington Square. He has since produced more than 20 recording projects, both as a soloist and in various combinations with vocalists and different groups of musicians. His newest two trio releases feature Bill Moody on drums and Steve Webber on bass.  Sail Away presents the music of Tom Harrell played by the Fregulia Trio, while  jazzitalia,  features compositions by Italian jazz artists. Previous CD’s  include Re: Person I Knew (trio tribute to Bill Evans), Art For Sale (the Dick Fregulia Trio), I’ll String Along With You (the Dick Fregulia Stringalong Trio with Brandon Robinson on guitar), “Live at Kuumbwa” (the Good Vibes Quintet), and “That’s Amore” (trio arrangements of 13 songs by Harry Warren).

The Dick Fregulia Trio and his Good Vibes Trio/Quartet/Quintet appear currently in San Francisco at Pier 23, Cafe Claude, and the Cliff House, while Dick performs as a soloist at Marin Joe’s in Corte Madera and with bassist Steve Webber at the Sand Dollar in Stinson Beach. Recently his trio has also performed concerts at the Bach Dancing and Dynamite Society in Half Moon Bay, the Book Passage in Corte Madera, JB Piano in San Rafael, and the First Congregational Church in Terra Linda.

Go to Dick Fregulia Jazz Piano for information about other gigs, audio and video samples and more.

*Comment by San Francisco restaurateur Sam DuVall from an adjacent table, circa 1991.

Behind the scenes at a Bill Evans rehearsal -1966