A dangerous rogue arrives in a village dominated by two warring criminal families and he quietly works for both.

Another more dashing rogue tries to protect a princess whose kingdom has been destroyed with the help of a pair squabbling sidekicks, one tall and one short.

Seven desperate renegades come to the defense of an equally desperate farming village to fight off a group of ruthless bandits. 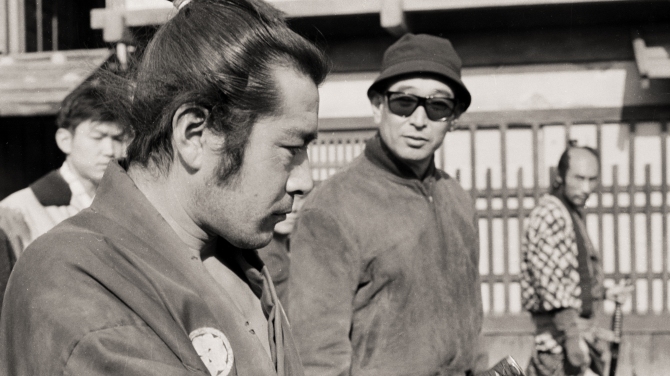 Toshiro Mifune and Akira Kurosawa on the set of Yojimbo

If one grew up in the San Francisco area during the 1960s and1970s you might discover the joys of good Japanese movies (there were plenty of bad ones too); you had several options to explore their cinematic world on the big screen. My first samurai film was Yojimbo at the Surf Theatre, a repertory cinema in San Francisco’s outer Sunset operated by Mel Novikoff. Of course I had seen many westerns but this was a different kind of “western” with breathtaking action and comedy perfectly balanced. I soon discovered that there were two full-time Japanese theaters in San Francisco, the Kokusai and the Toho Rio. They played mostly Toho films— a mixture of samurai and yakuza action films, Godzilla and friends monster movies, domestic dramas and the comic anti-hero Tora-San series.

Berkeley’s Cinema, Studio, Guild and Telegraph Repertory Cinema started showing samurai films as did the F.W. Murnau Film Society on the Berkeley campus. The owners of the Guild did so well that they bought the rights to Chushingura directed by Hiroshi Inagaki and featuring Toshiro Mifune, playing it for over one year and reviving it whenever they were short on cash because they would not have to pay film rental. The nearly four-hour epic always drew audiences. And when the Pacific Film Archive opened both Sheldon Renan and later Tom Luddy programmed major Japanese film retrospectives.

Soon it became clear that Sergio Leone’s A Fistful of Dollars was a remake of Akira Kurosawa’s Yojimbo and that his Seven Samurai provided the story for John Sturges’ The Magnificent Seven and the recent remake. And George Lucas acknowledges the major influences of Kurosawa’s Hidden Fortress on Star Wars.(see bottom of article for comparisons)

In 1978 Akira Kurosawa came to the bay area to meet with George Lucas and Francis Coppola for meetings on rescuing his Kagemusha project after the original producer, Toho Studios, pulled out.

A reception at the Pacific Film Archive was arranged. It was there I got to meet one of my heroes. Kurosawa’s translator, Audie Bock introduced the director and asked if he would sign my poster for Seven Samurai. I had been told that he did not usually do autographs but he looked at the poster and told Audie, “I have not seen the original poster since the film was released in 1954.” It is distinctive because, like most original Toho releases, there were musical bars around the border.

He signed it (unfortunately in red which tends to fade). 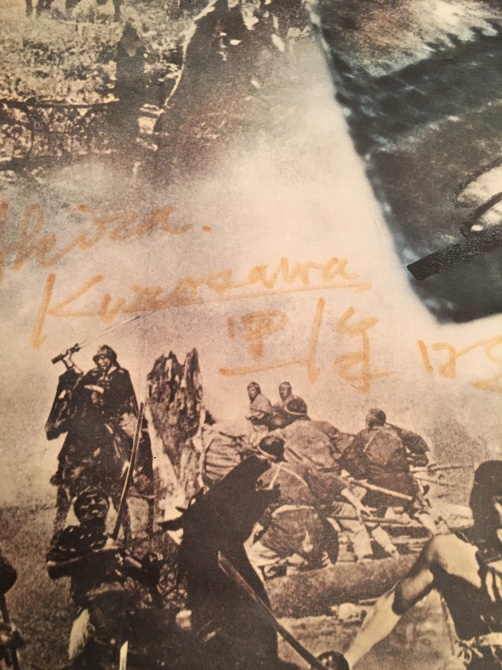 As a co-founder and head-programmer of Landmark Theatres, it was clear to me from the start that Kurosawa movies as well as those starring Toshiro Mifune (even if made by other directors) always drew big crowds. By 1982 we had started a distribution arm, Landmark Films and learned that one of our strongest draws, Seven Samurai was available in the uncut 208-minute version, never before screened theatrically in the U.S. We bought the film, found the original magnetic soundtrack masters and were able to clean up the sound over previous versions and present it in stereo. Now the sound really was spectacular—that wind and rain sent chills up and down the spine. 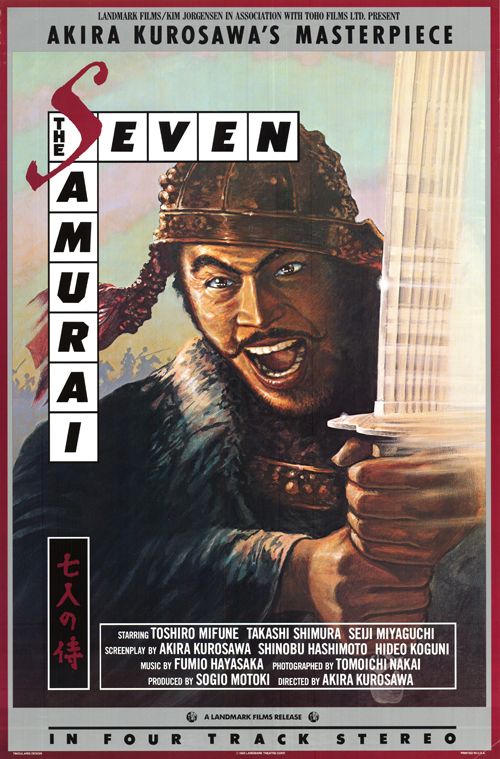 To launch the re-release we brought Toshiro Mifune to the U.S. in May, 1982. The plan in San Francisco was to have him do a press conference at the Wodell Screening Room after the press screening to launch the revival premiere at the Castro Theatre.

That morning I called the Fairmont Hotel, speaking with the man from Toho’s Los Angeles office to discuss the day’s plan. I suggested that I drive my car to the hotel and then use the large rental car they had.

“Mr. Mifune wants to know what kind of car you have?” he asked.

I responded that it was a Honda two-door hatchback. I could hear talking in Japanese and then he came back with, “Mr. Mifune would prefer to ride in your car because he trusts a Japanese car over the Ford.”

It was clear there would be no further discussion. Someone would have to be in the tiny back seat.

I arrived and they came out. Toshiro insisted the Toho man, older than him, sit in the front and the next thing I know Toshiro Mifune is crawling into the back seat of my Honda! It was a short ride to the screening room. All went well with the press.

Mifune driving on the set of Yojimbo– note sword on dashboard

After the conference I asked if he would sign my original poster. He took a look and said, “I have not seen that poster since the film came out. And how did you get Mr. Kurosawa to sign it?”

He took the sharpie and holding it like a sword, circling it around in the air a few times, lowered it to the poster and made more swirls on the paper and then gently added “T. Mifune  1982.”

Before dinner he asked if we could go shopping at Cost Plus. Back into the Honda. He wandered the aisles looking at the variety of items, much less predictable than what they sell today. People stopped and stared with comments like, “Isn’t that the samurai guy?” 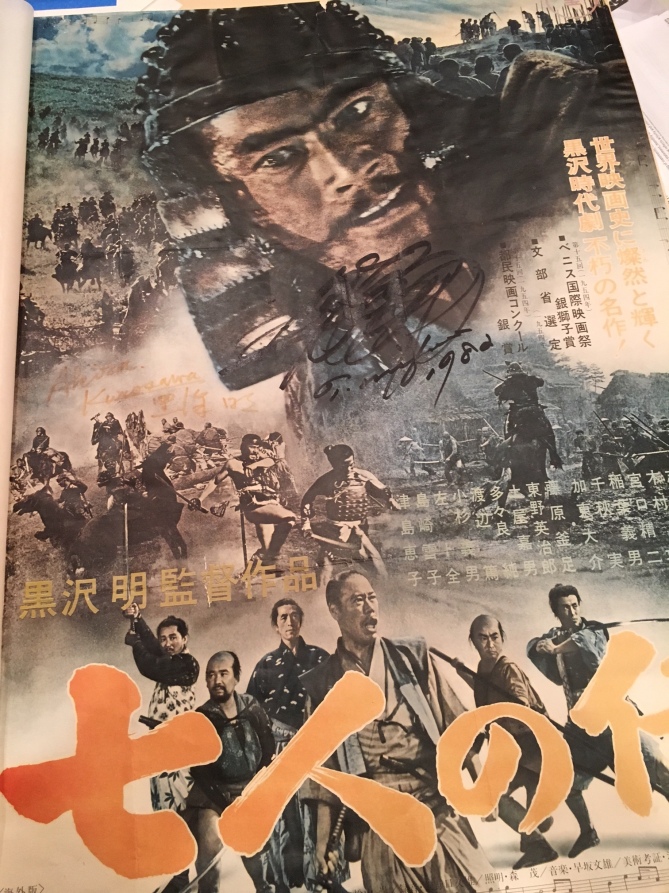 The original Seven Samurai poster signed by Mifune and Kurosawa

Mifune: The Last Samurai, a new film by Academy Award-winning filmmaker Steven Okazaki, explores the accidental movie career of Toshiro Mifune, one of the true giants of world cinema.

The film is opening in theaters around the US — current and future bookings can be found here.

Gary Meyer started his first theater in the family barn when he was twelve-years-old. He directed a monster movie there and wanted to show it on the set. It became The Above-the-Ground Theatre where over 250 films were screened along with live productions, workshops and the publication of a literary/arts/satire zine, “Nort!” and a film newsletter, “Ciné.” After film school at SFSU he calls his first job as a booker for United Artists Theatres “grad school”— it was prep to co-founding Landmark Theatres in 1975. With partners Steve Gilula, Paul Richardson and Bert Manzari they grew to a national art house chain focused on creative marketing strategies to build loyal audiences for non-Hollywood fare. Meyer led his team to create a variety of film festivals and special events to counter-program the increasing competition from home video and cable. After the partners sold Landmark, Gary consulted on many projects including developing concepts for Sundance Cinemas and the Business/Programming/Marketing Plan for Brooklyn Academy of Music’s Rose Cinemas, created the Dockers Classically Independent Film Festival, the no-budget Solstice Fest and Tube Film Festival for the X Games. He resurrected the 1926 Balboa Theatre in San Francisco and joined the Telluride Film Festival in 1998, becoming a Festival Co-Director in 2007-2014. He founded the online magazine, EatDrinkFilms.com in April 2014, and EatDrinkFilms presenting food and beverage related films with tastings. Meyer also consults with Cinetopia in Ann Arbor/Detroit and does specialized programming for food, music and film festivals.

Comparing Yojimbo and A Fistful of Dollars