In 2007, Orkin, a middle-aged Jewish guy from Long Island, did something crazy. In the food-zealous, insular megalopolis of Tokyo, Ivan opened a ramen shop. He was a gaijin (foreigner), trying to make his name in a place that is fiercely opinionated about ramen. At first, customers came because they were curious, but word spread quickly about Ivan’s handmade noodles, clean and complex broth, and thoughtfully prepared toppings. Soon enough, Ivan became a celebrity—a fixture of Japanese TV programs and the face of his own best-selling brand of instant ramen. Ivan opened a second location in Tokyo, and then now returned to New York City to open his first US branches.

Selected dishes at Ivan Ramen’s Slurp Shop.To learn what each one is check out J.     Kenji Lopez-Alt’s photo essay/review in Serious Eats.

Ivan Ramen is essentially two books in one: a memoir and a cookbook. In these pages, Ivan tells the story of his ascent from wayward youth to a star of the Tokyo restaurant scene. He also shares more than forty recipes, including the complete, detailed recipe for his signature Shio Ramen; creative ways to use extra ramen components; and some of his most popular ramen variations. Written with equal parts candor, humor, gratitude, and irreverence, Ivan Ramen is the only English-language book that offers a look inside the cultish world of ramen making in Japan. It will inspire you to forge your own path, give you insight into Japanese culture, and leave you with a deep appreciation for what goes into a seemingly simple bowl of noodles.

Many of the ingredients (marked in red) in these recipes can be purchased in Japanese food stores or made according to recipes elsewhere in the book.

Also can be read directly from the book’s pages here.

Tsukemen is a type of ramen modeled after its more illustrious cousin, soba (buckwheat noodles). Soba is the most Japanese of Japanese noodles, and it’s most commonly served cold with a side of soy-flavored dashi (also cold). Tsukemen is different from soba in that, while the noodles are cold, the broth is hot. Since the broth is meant to be consumed as a dipping sauce and not as a soup (although some places will add a little hot soup to your dip at the end and encourage you to drink it), it’s much more pungent and intense than normal ramen broth. Tsukemen was invented by Kazuo Yamagishi, the owner of Taishoken, one of the more legendary ramen shops in Tokyo. In the last four or five years, tsukemen has taken Japan by storm—there are now shops that peddle tsukemen exclusively.

When I opened Ivan Ramen, I wasn’t a big fan of tsukemen, but I felt compelled to accommodate its popularity. But my tsukemen never quite came together the way I wanted, and I took it off the menu after a few months. The following year, I went back to the drawing board. I realized that the real joy of tsukemen is that it highlights the noodle. Around the time

I started trying again, my flour purveyor sent me a bag of rye flour. Rye is a really interesting flour—incredibly fragrant, and with much less gluten than wheat. Of course, it also immediately sent me back to my Jewish childhood, when my mother would buy a fresh loaf of rye bread every Friday for Shabbos.

At this point, I didn’t know anybody who used whole grain flours in ramen noodles. When I told people I wanted to use rye in my noodles, they warned me not to make a noodle with flecks of grain in it—“People will think it’s bugs or dirt.” But the rye gives the noodles a beautiful aroma and more integrity. Five years later, whole grain noodles are everywhere. I’m not suggesting I started the trend, I’m just saying . . .

4 thick slices pork belly chashu, warmed in its cooking liquid or in the noodle water as it comes to a simmer

1. Grind the sesame seeds and chile flakes in a mortar and pestle until they’re about half the size they started. (Alternatively, you can do this in a food processor, but pulse carefully or you’ll end up with butter.)

2. Mix the ground seeds and chile with the katsuobushi salt, pureed garlic, vinegar, honey, and shoyu-sofrito tare. Set out 4 cups or bowls and divide the mixture among them, then divvy up the pork fat.

3. Distribute the hot soup among the cups or bowls. Whisk each briefly to combine everything.

4. Pile the chilled noodles onto 4 separate plates and set a piece of warm chashu on top of each pile. Sprinkle with green onions. Nestle a halved half-cooked egg on the plate, if you’re using them.

5. To eat, dip some noodles into the soup and slurp them up.

More lessons from Ivan on Eat My Shorts – Ramen Revolution

This recipe is a bit difficult to translate to the home kitchen. Flour and water are different all over the country, and very different from what’s available in Japan. Ramen dough is odd—not quite wet and not quite dry—and doesn’t easily come together. Having said that, making your own noodles is rewarding, and you’ll only get better with practice. God knows my first fifty batches of noodles were made with little to no knowledge, and on a hand-cranked pasta machine. If I could do it, you certainly can.

Ingredients to make about 1 kilo (2 pounds)

1. In the bowl of a stand mixer, combine the flours and set aside.

2. In a separate bowl, slowly stir the kansui into the water until it’s fully dissolved (this takes a little time). Then stir in the salt to dissolve.

3. Outfit your mixer with the dough hook attachment. With the mixer running on low speed, add the water in thirds to the flour mixture. After a few minutes, the dough should begin to come together. It will be a bit shaggy—more so than Italian pasta dough. If it isn’t coming together at all, add a spoonful of water. Once it comes together, increase the speed to medium-low and let the machine run for 10 minutes, until the dough forms a ball. Turn off the mixer and cover the dough with plastic wrap. Let stand for 30 minutes.

4. After 30 minutes, the dough should be significantly softer in texture and smoother in appearance. Set the dough ball on a cutting board, flatten it with the palm of your hand, then cut it into four 5-centimeter (2-inch) strips. Cover the dough strips with a damp kitchen towel.

5. Set up your pasta machine and adjust it to the largest size. Pass one sheet of dough through the machine, then fold it over on itself so that you have a double sheet. Turn the machine to the second largest size, and run the doubled sheet through. Double the sheet over again, and run it through the third largest setting.

6. Don’t double the sheet over again. Run it through the fourth largest setting, then once through the smallest setting. Set aside and repeat with the remaining sheets of dough. Once the dough is all rolled, pass the sheets through the widest cutter you have, or cut by hand into fettuccine width noodles. You should have a nice, wide noodle with a little heft. Toss the noodles with a little cornstarch to keep them from sticking together, and shake off the excess before cooking. Store the noodles in a container wrapped tightly with plastic (or individual portions in ziplock bags) for up to a day.

7. Cook the noodles until just al dente in a large pot of boiling unsalted water; this will probably take 2½ to 3 minutes, but the first time you make this, you’ll need to watch and test them to find the right timing.

8. Once the noodles are cooked, drain them and run them under cold water, stirring with your hand to completely cool them. Shake them thoroughly in the strainer to get rid of as much water as possible before serving.

Reprinted with permission from Ivan Ramen by Ivan Orkin © 2013. Published by Ten Speed Press, a division of Random House, Inc.

Ivan Ramen can be purchased at many local independent bookstores as well as from Indiebound or Amazon. 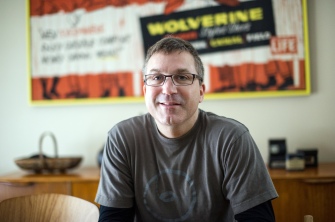 “Born on Long Island, New York, Ivan Orkin studied Japanese at the University of Colorado Boulder and, after graduation, moved to teach English in Japan. He returned to New York a few years later ready for a change, and enrolled in the Culinary Institute of America, graduating in 1993 and externing under Bobby Flay at Mesa Grill. After working at Lutèce and as a corporate chef, Orkin returned to Japan with his wife and child, where, in 2007, he opened the first Ivan Ramen in Tokyo. Despite being a foreigner tackling one of the country’s favorite foods, Orkin quickly found success. He opened his second location, Ivan Ramen Plus, in 2010 before returning to NYC to open Ivan Ramen Slurp Shop and the flagship Ivan Ramen in 2013 and 2014, respectively. There, he serves the namesake noodles—made out of rye and whole wheat—that have made Ivan Ramen a hit in two highly discerning cities.” Courtesy of StarChefs.com

Ramen master Ivan Orkin talks with Daniel Gritzer, Associate Food Editor At Food & Wine. Orkin tells the story of his own culinary journey and his mission to bring the joys of traditional Japanese food to a world audience. At Strand Books.