Recipes from the new book by Andrew Tarlow and Anna Dunn 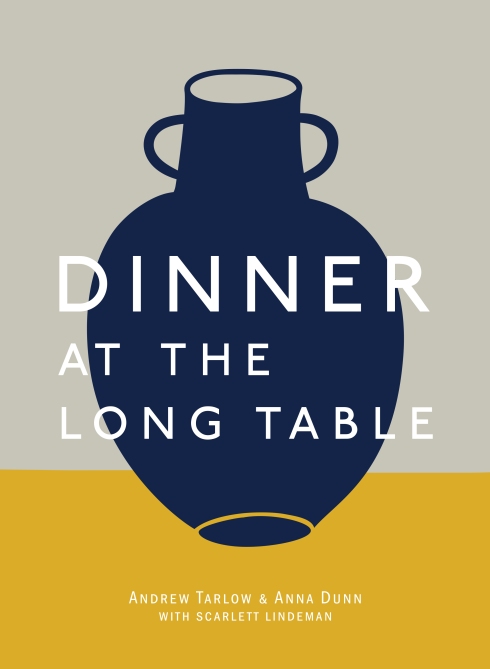 Andrew Tarlow has grown a restaurant empire on the simple idea that a meal can somehow be beautiful and ambitious, while also being unfussy and inviting. From the acclaimed owner of Brooklyn’s Diner, Marlow & Sons, Marlow & Daughters, Reynard, The Ides, Achilles Heel, She Wolf Bakery, Marlow Goods, Roman’s, and the Wythe Hotel comes this debut cookbook capturing a year’s worth of dishes meant to be shared among friends.

Personal and accessible, Dinner at the Long Table brings Tarlow’s keen eye for combining design and taste to a collection of seventeen expansive, inspiring and surprising menus— perfect to celebrate birthdays, mark the coming and going of seasons, or usher in a new year.

It’s food that puts romance and exuberance into eating and cooking, and that recognizes the beauty in the preparation of a meal. It’s earnest, bohemian, honest, playful and always bursting with flavor. In short, the food you most want to eat: A leisurely ragu, followed by fruit and biscotti; paella with tomato toasts, and a Catalan custard; fried calamari sandwiches and panzanella; or a lamb tajine with spiced couscous, pickled carrots and apricots in honey.
Dinner at the Long Table is an invitation into the generous, radiant world that Andrew has created, full of delicious and direct food, friends old and new — and a celebration of a messy, beautiful and rich life. Written with Anna Dunn, the editor in chief of Diner Journal, the cookbook is punctuated with personal anecdotes and photography evoking the simple yet innate human practice of preparing and enjoying food together.

Dinner at the Long Table includes family-style meals that have become a tradition in his home. Written with ANNA DUNN, the editor in chief of the company’s quarterly magazine Diner Journal, the cookbook is organized by occasion and punctuated with personal anecdotes and photography. Much more than just a beautiful cookbook, Dinner at the Long Table is a thematic exploration into cooking, inspiration, and creativity, with a focus on the simple yet innate human practice of preparing and enjoying food together.

“Andrew Tarlow’s remarkable success as a restaurateur stems from his fundamental love of cooking – and then sharing what he loves with others. Dinner at the Long Table gives that same gift to home cooks. These are winning recipes, each infused with the warmth and joy that make Andrew Tarlow’s soulful restaurants so compelling and memorable.”-Danny Meyer

1 red chile, such as cayenne or red jalapeño, sliced

Cut the eggplant in half lengthwise. Score the cut sides of the eggplant and sprinkle with salt. Let drain in a colander in the sink for an hour. Preheat the oven to 350°F. In a skillet, cook the eggplant sliced side down in a glug of oil until brown, about 8 minutes, then transfer to a baking sheet.

Meanwhile, char the green beans, dry, on a grill or under a broiler until quite black on the outside. If you do it fast and hard, the beans should keep some of their texture, though the outside may have ashy skin. Run a knife through the beans so they’re more or less cut in half, widthwise. Set the green beans aside. Blister the tomatoes in a dry sauté pan under the broiler, then add oil, season with salt and pepper, and cook just until the tomatoes pop, about 5 minutes.

Combine the eggplant, string beans, tomatoes, dried oregano, and basil in a large bowl. Season with salt, pepper, and a bit more oil and fold in the Parmigiano-Reggiano. Taste the eggplant mixture; it should be well seasoned.

To assemble the gratin, spoon the eggplant mixture into a large baking pan or individual gratin dishes. Dollop spoonfuls of ricotta cheese on top and then sprinkle bread crumbs over the whole thing. Bake just until warm and the bread crumbs look good and crusty, about 30 minutes. Sprinkle the sliced chile, picked marjoram, and black pepper over the top. Drizzle with the balsamic vinegar and olive oil to finish. Serve hot, warm, or at room temperature.

“Andrew’s restaurants are great and I assume these recipes are from there and not some other bad restaurant I don’t enjoy. That would be very odd. I say – purchase this cookbook and quit reading my dumb quote.”  -Aziz Ansari

Roasted Leg of Lamb & Potatoes Dressed down with Zest

If you can roast this lamb on a string over an open flame, then make sure you leave the bone in. For conventional ovens, ask your butcher for two legs of lamb, de-boned. You’ll want all the potatoes to be about the same size. Medium to large fingerling potatoes are perfect for this roast.

Season the lamb legs inside and out with salt and pepper. With a large mortar and pestle, pound the anchovies, garlic, and rosemary into a paste. Rub the paste all over the lamb, really massaging it in. Roll up the lamb and secure it with kitchen twine; finally, a chance to practice your knot-tying skills. Cover and refrigerate overnight.

Two hours before dinner, remove the lamb legs from the refrigerator. Preheat the oven to 425°F. Place the potatoes in the bottom of a large roasting pan. Pour the olive oil over the potatoes and season well with salt and pepper. Place the lamb legs on top of the potatoes. Roast for 20 minutes, then lower the heat to 350°F. Continue to roast until the internal temperature is 135°F, 45 to 60 minutes. Remove from the oven, transfer to a platter and let rest for 30 minutes.

“I hate to think that my gluttony (which per se is a sin) causes a cascade of other sins such as environmental problems and animal suffering. Tarlow’s food corals my gluttony leaving it just at what it is: a love of eating well.” -Isabella Rossellini

Lemon custard tart feels a little like eating sunshine when you’re longing for the summer, conceptual sunshine. Neale Holaday, the pastry chef at Marlow & Sons and Diner, wrote this recipe for us.

Preheat the oven to 325°F. To make the tart shell, cream the butter and sugar together in a bowl with an electric mixer until light and fluffy, about 5 minutes. Add the egg and beat until fully combined. Fold in the flour, baking powder, and salt until a dough forms. Turn the dough out onto the counter and form into a ball. Roll the dough between 2 pieces of parchment paper until it’s about ¼ inch thick. Transfer the dough to a 9-inch tart shell. Trim any overhang with a sharp knife and prick the bottom with a fork. Bake until golden brown, 10 to 15 minutes. Let cool while you make the custard.

To make the custard, soak the gelatin in cold water for 5 to 10 minutes to bloom. Prepare an ice bath by filling a large bowl with ice and cold water and set aside. In another bowl, whisk together the egg yolks, sugar, lemon juice, lemon zest, and salt. Transfer the egg yolk mixture to a pot and cook over low heat, whisking constantly, until the mixture thickens and coats the back of a spoon, 3 to 5 minutes. Cut the heat immediately. Wring the gelatin of any excess water and whisk it into the egg yolk mixture along with the butter until the gelatin dissolves and the butter melts. Strain the custard through a fine-mesh sieve into a bowl and set the bowl in the ice bath. Stir constantly until the custard cools, then pour into the prepared tart shell. Refrigerate overnight or for at least 1 hour before serving.

Andrew Tarlow will be making appearances in the San Francisco and New York to launch his new book.

We urge you to purchase Dinner at the Long Table at your local independent bookstore but it is also available online from Indiebound and Amazon.

You can request an autographed copy from Omninvore Books on Food in San Francisco.

ANDREW TARLOW  -In 1999, Andrew opened his first restaurant, Diner, which serves locally-sourced, New American food inside a refurbished 1927 dining car in the industrial neighborhood of South Williamsburg. Marlow & Sons, a restaurant, oyster bar, and general store, soon followed next door, functioning as a cafe by day and a raw bar and restaurant by night. Other culinary ventures include Marlow & Daughters, a butcher shop specializing in locally sourced grass-fed meat; and Roman’s in Fort Greene, an Italian-inspired restaurant with a three course menu that changes daily. In 2012, Andrew and his partners opened the Wythe Hotel and its ground floor restaurant Reynard in a turn-of-the-century factory building in Williamsburg. He most recently opened Achilles Heel, a riverside watering hole featuring natural wine in Greenpoint. He is publisher of Diner Journal, an independent magazine featuring original art, literature, and recipes. Tarlow grew up in New York and began his career as a painter and a bartender at the Odeon. He now lives in Fort Greene with his wife, designer Kate Huling, and their four children.

ANNA DUNN is the Editor-In-Chief of Diner Journal since its inception, and a bartender at Diner, Achilles Heel, and Roman’s for almost as long. She co-authored the Saltie cookbook and is hard at work, while hardly working, on her first crime fiction novel. GLOWINGLIKEAGASLAMP.COM