“Track down a copy and prepare to have your mind blown.” – Thomas Gladysz

The book is truly a mind-blowing experience. You keep looking and finding new wonders.

A large-screen program inspired by the book will show at the San Francisco Silent Film Festival on Sunday, June 5, 2016. The screening is at the Castro Theatre at 10am. Details and tickets here.

We normally think of early film as being black and white, but the first color cinematography appeared as early as the first decade of the twentieth century. In this visually stunning book, the editors present a treasure trove of early color film images from the archives of EYE Film Institute Netherlands, bringing to life their rich hues and forgotten splendor.

Carefully selecting and reproducing frames from movies made before World War I, Giovanna Fossati, Tom Gunning, Jonathon Rosen, and Joshua Yumibe share the images here in a full range of tones and colors. Accompanying essays discuss the history of early film and the technical processes that filmmakers employed to capture these fascinating images, while other contributions explore preservation techniques and describe the visual delights that early film has offered audiences, then and now.

Of course there are images from films by Georges Méliès while reminding us of the fascinating work of other early filmmakers — Louis Feuillade, Thomas Edison, Gastón Velle, Alfred Machin, Ferdinand Zecca, Giovanni Vitrotti, Léonce Perret, and Georges Denola. But the revelation for many will be Segundo de Chomón, a Spanish filmmaker working for Pathé Frères. He is often compared to Méliès because of his use of optical illusions and special effects. It is time for a tribute to this brilliant filmmaker. This book and the screening at the San Francisco Silent Film Festival is a good start. A selection of his films can be viewed here.

Featuring more than 300 color illustrations for readers to examine and enjoy, Fantasia of Color in Early Cinema will engage readers of all ages and backgrounds.

“The most gorgeous collection of photos I’ve ever seen. These images, somehow still fresh with the power of their novelty, startle the eye every time I behold them. Mysterious and wondrous effect! And such a fascinating history!” – Guy Maddin, director of My Winnipeg and The Heart of the World

EatDrinkFilms is pleased to offer the book’s

History is always broken up into turning points and categories, I suppose because they allow us an efficient and convenient framework for thinking about developments over time. A historical shorthand. The Middle  Ages came to a halt with the Renaissance. The agrarian way of life was overturned by the Industrial Revolution. Figurative painting branched into photography on the one hand and abstract art on the other. Silent cinema ended with the coming of synchronized sound in the late ’20s. And there are black-and-white movies and color movies.

Of course, we all know that on close inspection, everything looks more complex, and these clean breakthroughs and beginnings and endings become less and less useful. In the matter of color in cinema,  for instance, you have to ask: which color process? Technicolor? 2-color or 3-strip? Eastmancolor? Are we talking about color from the ’70s onward? Printed on which film stock? And now—is the movie in question shot on film or HD? Has the color been altered in postproduction? And at any given period in film history, you have to ask: whose color? Jack Cardiff’s? Néstor Almendros’s? And for which director? Hitchcock’s sense of color is as different from Michael Powell’s as Jean-Luc Godard’s is from Hou Hsiao-hsien’s. 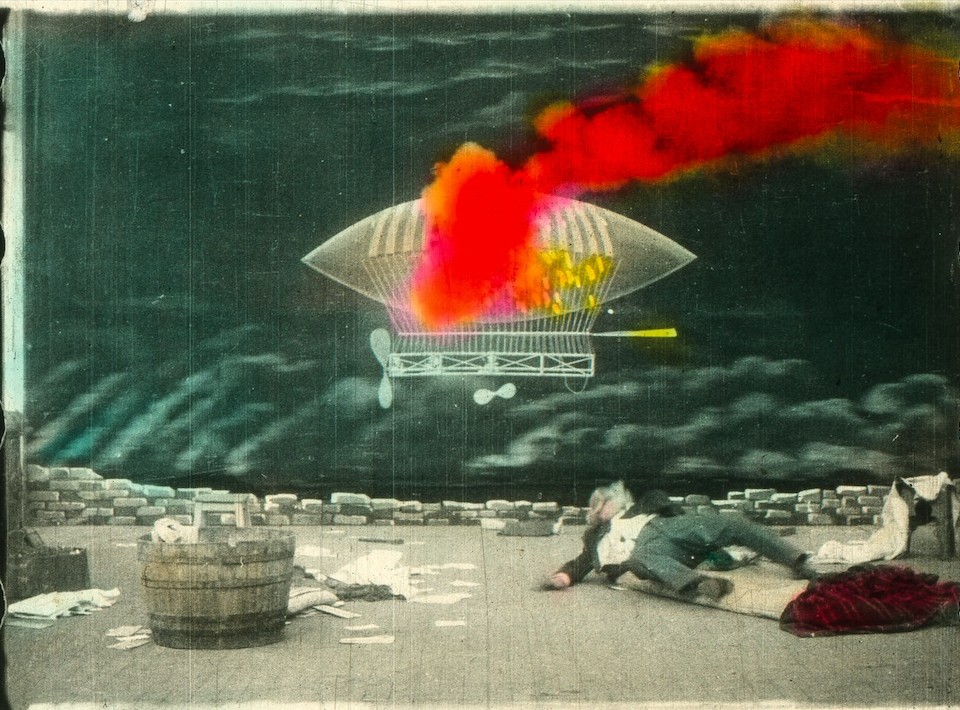 And when we’re talking about the earliest color in cinema, we’re not even talking about a process, but an artisanal practice—a bridge between the handmade and the industrially produced. In the images so lovingly assembled in this book, complementing the thoughtful and informative essays of Giovanna Fossati, Tom Gunning, Jonathon Rosen, and Joshua Yumibe, you can feel the links to the 19th century, to magic lanterns and stereopticons and stage tableaux. In other words, the single image (in this case, the single 35mm image) and the frame that contains it.

I could gaze at the images in this book for hours. They are as fascinating as illuminated manuscripts or magic lantern slides. And each one, isolated from the greater whole of which it was originally a part, offers us a sublime miniature world in which a thousand and one stories are about to take place.

(Reprinted with permission of the authors, Amsterdam University Press and The University of Chicago Press. Copyright 2015.)

“Fantasia of Color in Early Cinema is a brilliant, revelatory book, one that provides an instant cure for the color blindness that afflicts most viewers of early cinema, and a gateway into a little-known world of imagination and technical virtuosity. Illuminated by dazzling reproductions and authoritative essays by leading film scholars, this is the first book to do visual justice to the magical world of early cinema. It is also a masterpiece of book art in its own right.” – W.J.T. Mitchell, author of What Do Pictures Want?

“In the endless rewrite of art history the moving image seems indefinably futuristic. Fantasia of Color in Early Cinema makes the case for the importance of these mind-blowing masterpieces. These stunningly chromatic film stills link technology and the human touch while revealing one of film’s best kept secrets. Traditional painting and sculpture relies on reflected light while projected light opens a wildly new path of experimentation. Here we see, for the very first time, images made at the speed of light.” – Tony Oursler

Copies of the book will be for sale at the Castro Theatre during the San Francisco Silent Film Festival or by special order from your local bookstore. You can also order directly from the publisher or Amazon.

All images are from the collection of EYE Filmmuseum.