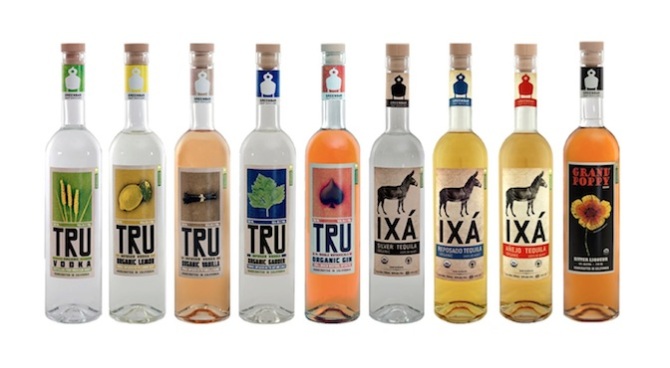 What does someone who writes about spirits and cocktails do when she goes out of town? As it turns out, she visits a distillery. Call it a busman’s holiday. But a recent trip to Los Angeles involved a trip to the Greenbar Craft Distillery, where my fellow tasters and I learned the ways in which we can actually become “carbon negative” for a day when we imbibe one cocktail made with two ounces of any Greenbar spirits. How does that work? Here’s the helpful chart to explain:

Greenbar, the first post-Prohibition distillery in LA, takes its obligations to sustainability and the use of organic materials seriously. They plant a tree (in the rainforests of Central America) for every bottle sold, thereby replenishing the forests and providing shade for the benefit of local coffee and cacao farmers. All their labels are made from post-consumer materials. They use lightweight bottles. One could feel almost virtuous after purchasing several bottles of Greenbar spirits. Raise a glass to your negative carbon footprint, and imagine those newly planted trees. It’s a good feeling. And so is the tasting part of the tour, which I will get to in a moment.

But first, a look around.

Greenbar’s spacious tasting and merch area has a high ceiling crisscrossed with metal conduit; the room contains other elements that lend it a modern, industrial look: exposed beams, glass, concrete, and wood. Comfortable seating is available in the center of the room, and once the tasting begins, folks gather at the bar. 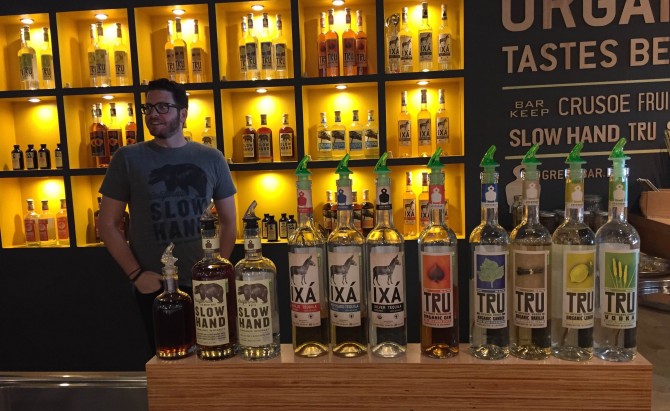 The house-made spirits are attractively displayed around the room, along with T-shirts and hats that sport the Slow Hand logo.

Our highly informed tour guides Drew and Katie filled us in on the entire distillation process and showed us around the stills located on the floor below the tasting area. The large copper “pot still” reminded me of one of those old-fashioned deep sea diving bells, with legs. Standing tall next to it is a continuous fractionating column still, with several tall copper columns. We got a detailed explanation about how these stills work, and learned about the careful sampling and tasting that goes on throughout the process. 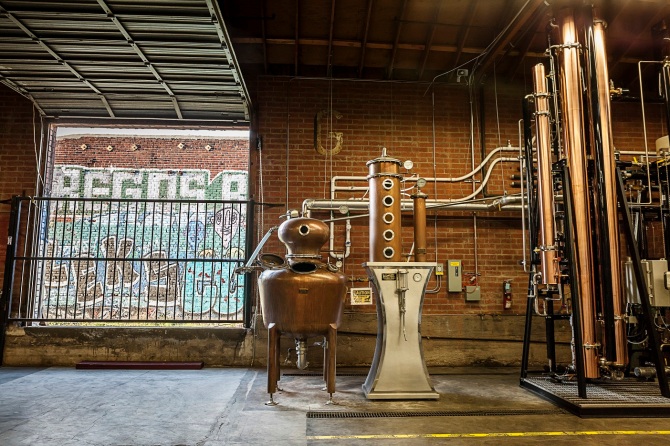 The tasting is critical to achieve the consistency Greenbar insists upon; they’ve been successful in reaching 95% consistency, which is remarkable considering all the variables that go into making each spirit. We learned that all the organic lemons used in making the lemon vodka are hand-zested: for each 1,000 gallon batch, someone has produced the zest of 2,000 fresh Eureka lemons. And for the vanilla vodka, someone has split 5,000 vanilla beans. There are no shortcuts — which means a whole lot of zesting. 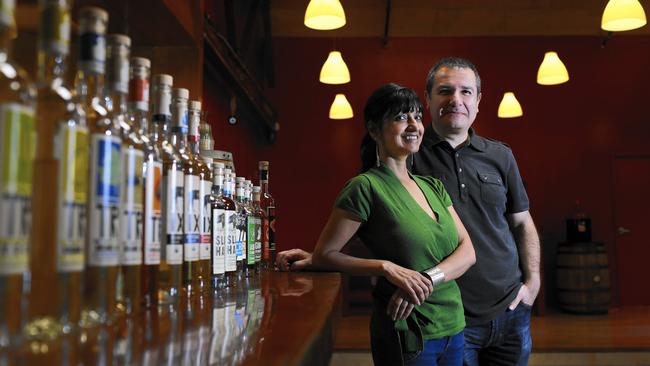 When Greenbar’s owners, husband-and-wife team Melkon Khosrovian and Litty Mathew, founded the distillery in 2004, they used “conventional spirits and local, hand-processed produce.” But eight years ago, they realized the difference in the results they got from using organic produce, and they made the switch to 100% organic. The difference in flavor and aroma makes everything they produce “taste like food,” instead of, say, Lemon Pledge or some other chemically enhanced flavor profile.

What else gets produced by Greenbar? In addition to vodka, they make gin, whiskey, liqueur, rum, bitter liqueur, tequila, and bitters. 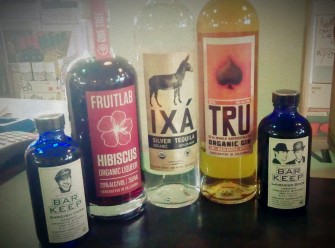 So after we learned about how the spirits are made, we were encouraged to taste the ones we were most interested in. (Six 1/4 ounce tastes are included in the $12 price of admission.)

Here’s what I chose to sample:

My first selection: Fruitlab Orange liqueur. Made with three kinds of fresh oranges (sweet, sour, and bitter), with a base of organic sugar cane. This was essence of orange. I could imagine mixing it with a sparkling wine, rum, or gin. Or anything.

Second taste: Grand Poppy liqueur. Named after our state flower. All ingredients are native to the state: California poppy, orange, lemon, grapefruit, bearberry, California bay leaf, pink peppercorn, dandelion, blessed thistle, burdock, rue, artichoke, gentian, geranium, cherry bark, and cane sugar. How does the taste add up? The flavors are intense as they roll out with each sip: a little bitter, a little sweet. You could spend a lot of time trying to figure out how well grapefruit and artichoke go together, or you could add some of this to a cocktail and simply enjoy it. 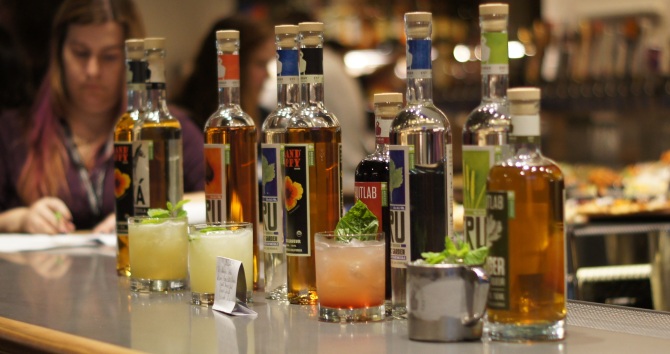 Third taste: Six Woods whiskey, made from 100% malted barley. This was a tongue-tingling, throat-warming shot of liquid gold. Wow!

Fourth taste: Fruitlab Ginger liqueur. Very gingery, flavored with fresh, dry and candied ginger, lemon and cane sugar. Oh, the Dark and Stormy you could make with this! Also, would make an interesting margarita. Must love ginger to enjoy this one.

Fifth taste: Crusoe Spiced Rum. “Tastes like Christmas,” they told us tasters. Whole cinnamon, clove, nutmeg, allspice, vanilla, orange zest, osthmanthus flower, and molasses will put you in the holiday mood for sure. I have a Tom and Jerry recipe that cries out for this rum. Happy holidays!

Sixth and final taste: Tru Gin. It’s heavily botanical, like a walk in the forest—a forest that is full of strong and competing flavors and aromas. If I were to make a cocktail with this, I’d lean toward adding some citrus. In my tiny taste sample, it was very “spice forward.” 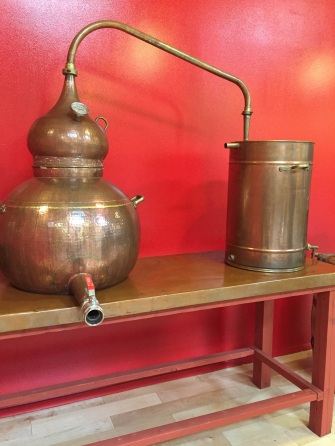 If you find yourself in LA with a free hour or two, visit Greenbar. You may learn something new, taste something new, and if the spirits move you, bring home a bottle or two. The forest will thank you.

Risa Nye lives in Oakland. Her articles and essays have appeared in the San Francisco Chronicle, The Monthly, Hippocampus magazine, and several anthologies. She writes about cocktails as Ms. Barstool for Nosh at berkeleyside.com and about other things at risanye.com.