François Truffaut’s many hour of interviews with the master of suspense, Alfred Hitchcock resulted in a book that influenced several generations of filmmakers. It helped film lovers understand the language of cinema as Truffaut integrated images with their discussions in a truly special collaboration. Laura Truffaut had a unique perspective as the daughter of the great filmmaker. Roger Leatherwood remembers Hitchcock/Truffaut being his first film book, “I poured over it page by page, over and over” the filmmaker told us. He wasn’t the only one. Now a fascinating documentary about these filmmakers opens nationwide.

Laura and Roger offer their perspectives. Following the reviews are many of those original interviews and some surprises including a short with every cameo Hitchcock made in his films.

In the interviews that form the basis of the book Truffaut/Hitchcock, Alfred Hitchcock gripes about scenes that are mere footage of conversations: “In many of the films now being made, there is very little cinema: they are mostly what I call ‘photographs of people talking.’ When we tell a story in cinema, we should resort to dialogue only when it’s impossible to do otherwise. I always try first to tell a story in the cinematic way, through a succession of shots and bits of film in between.”

Kent Jones’ new documentary on what my father called, for short, the “Hitchbook,” shows us plenty of people talking, with bits of film, all of them Hitchcock’s own, in between; and yet the bits of film are exquisitely well-chosen. And as for the conversations, I found them fascinating; in fact, I wouldn’t have minded listening to more of them. What my father set out to do in 1963, when he recorded those long interviews at Universal Studios with the assistance of his friend and collaborator Helen Scott, was to elicit a multitude of insights into directing from the director he felt had thought the most, and for the longest time, about filmmaking. My father’s ambition was very clear: to engage in the most educated discussion of film one could imagine, a discussion between colleagues equally obsessed and enthralled by their line of work. He also wanted the book to be as richly illustrated as possible, because even the most stellar conversation would remain frustrating to the reader without the relevant visual evidence, film by film, sometimes shot by shot. 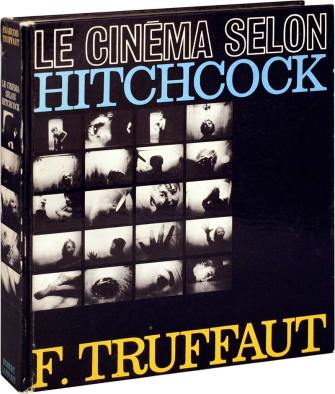 Similarly, Kent Jones was smart enough to focus the investigation that is at the heart of his documentary on filmmakers exclusively, leaving aside film historians, theoreticians, actors, etc, who couldn’t possibly have the same point of entry into this 50-year-old conversation.

My father did not feel that Hitchcock was the one-and-only best filmmaker in the world. Thinking in terms of lists or pantheons was not his style, and he cherished the first-person voice and style of Welles, the flawless pace of Hawks, the rounded characters of Renoir and the irreverence of Bunuel just as much. But Hitchcock, he felt, had reflected on ways to hold an audience captive beyond all others.

A theory that my father held dear among many – if he wasn’t big on lists, building theories was practically a hobby of his – was that Hitchcock, by virtue of having become a director during the silent film era, detained the key to what he called “a lost secret,” an in-depth knowledge and understanding of how images work that could never be fully accessible to directors who started their career after the advent of sound. Of course Hitchcock was not alone in this elite club; Bunuel, Ford, Chaplin, Renoir, Lubitsch and others were also in on the secret. But as Hitchcock had been so marginalized by American film critics and as his films were still thought of as minor entertainment in spite of their wide popularity, I suspect that my father found the challenge of devoting a whole book to a serious reconsideration of the master’s work even more attractive.

If I have one bone to pick with Kent Jones’s intelligent and stimulating movie, it is that the lion’s share of the discussion of the master’s work is devoted to Vertigo. In our household, Notorious and Psycho were discussed and quoted far more frequently, and I knew the score of Spellbound and the whistled song in Lady Vanishes from a young age. Granted, the rise of Vertigo to the top of the Hitchcock canon had not yet occurred at the time of the Hitchbook, perhaps because, as Martin Scorsese rightly notes, this was an almost impossible film to see back in the 1960s and ‘70s. I wonder how my father would see the recent development that has brought “Vertigo” to the No. 1 spot on so many film lists. But then, I also loved hearing James Gray’s enthralling commentary on the film.

You can’t argue with infatuation, and if Vertigo is “it” for so many film directors today, so be it.

After the fall of the Berlin Wall, my sisters and I started receiving letters from publishers based in Hungary, in Poland and all over Eastern Europe who were eager to publish the “Hitchbook,“ which was by then no spring chicken. Next year the book will celebrate its 50th birthday – still in print, still being translated just about everywhere, and with a brand new documentary entirely devoted to it and its influence on my father’s peers and colleagues. I can’t imagine a better birthday present.

Laura Truffaut is a teacher and translator living in Berkeley, California. As a 10-year-old, she played the young companion of the title character in The Wild Child. She is passionate about cinema and has volunteered at the Pacific Film Archive in Berkeley.

Interviews with Laura Truffaut about her father and Wild Child in Cinemasource and the Los Angeles Times. 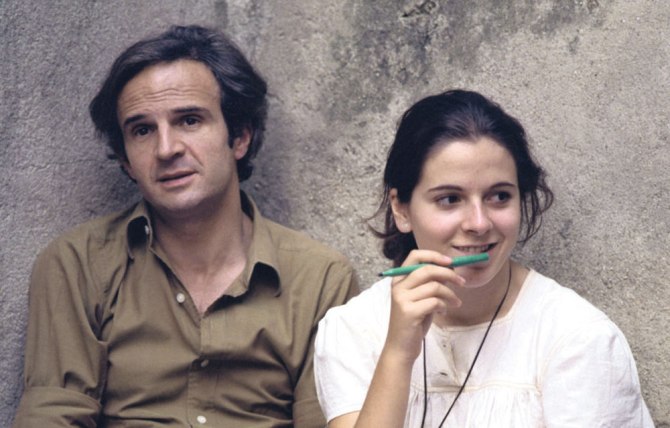 Francois and Laura on the set of Wild Child. Photo by Hélène Jeanbreau.

You can get the revised edition of Hitchcock/Truffaut from your local bookseller, or also from Indiebound and Amazon. 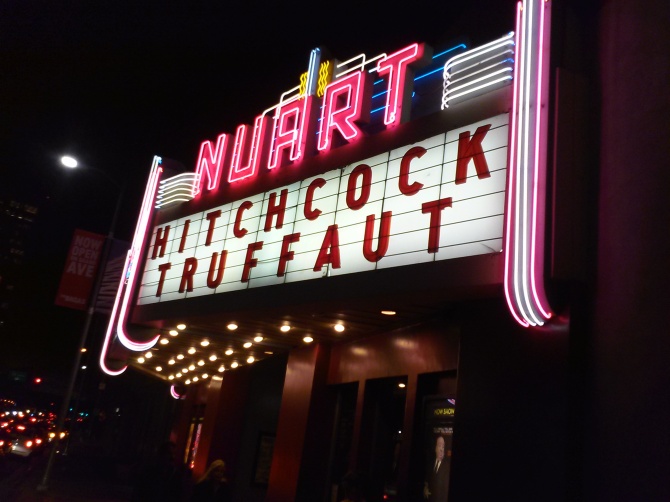 Hitchcock/Truffaut — The Biography of a Book

Film fans of a certain age, and some of them are certainly represented and name-checked in the film, will immediately recognize the true subject of the new documentary by Kent Jones, Hitchcock/Truffaut .

Hitchcock/Truffaut (Simon & Shuster) was published in 1966, a transcription from a series of interviews Truffaut (then 30, and having finished his third film, Jules and Jim, held with Hitchcock (having finished his 40th film, The Birds) in 1962, with Helen Scott as translator, discussing his films title by title, from production histories to aesthetics. 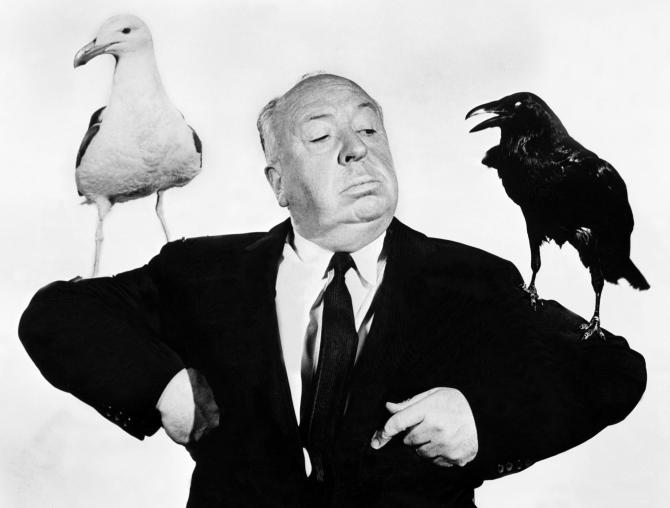 As a work of cinematic analysis, nothing like it had been done before. Film culture was still defined by Hollywood studios and fan magazines that ran puff pieces on the latest blockbusters. There hadn’t been a book devoted to a single director, certainly not one created by one being interviewed by another, in English before. 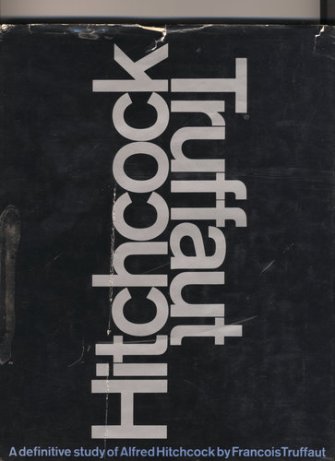 The title and the book, with the iconic cover of the two names of the directors side by side rather than one under the other, suggested a co-production, that the two men were interviewing each other. It was a film-by-film reference when no such texts, let alone IMDB, were available to refer to. Every time I saw a new Hitchcock film I’d return to my thumb-eared copy to read what the two masters had to say about that one. The book is the seminal text in the ’60s to bring Hitchcock to true critical attention at a time when the auteur theory and a handful of French critics writing for the Cahiers du Cinéma magazine were proselytizing the aesthetic value of American pop culture, even in westerns and spy thrillers.

Only someone with Truffaut’s appreciation and film-making insight could have gotten such information out of the “Master of Suspense.”

Hitchcock, always a populist, was flattered and amazed his work might deserve so much attention from an up-and-coming nouvelle vague director. In the book, he continually pushed back on having overly lofty aims, focusing on the practical, while teasingly admitting over and over Mr. Truffaut might be onto something when he pointed out the endless nuances of character, or camera movement, or stylized mise en scene in Hitchcock’s films.

Fully admitting his mistakes of judgment and missed opportunities, Hitchcock still managed to gleefully explain aspects of every film. The talks were all recorded and transcribed, and the book illustrated with hundreds of frame-by-frame shots to illustrate framing, sequences and cutting strategies. 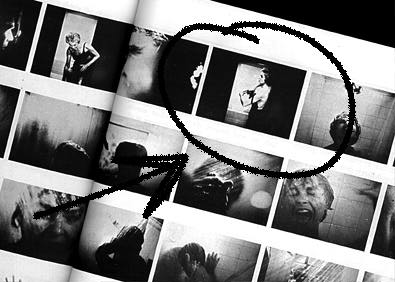 How does a book about films become a film about a book? To start, Kent Jones extensively excerpts recordings of the original interviews, the two men’s voices often underscored by the voice of Helen Scott, who translated Truffaut’s French for Hitchcock and Hitchcock’s English for Truffaut. It serves as the soundtrack over footage of the films that are being discussed, and Jones often picks beautifully visual examples that play without dialogue or need of explanation. After all, enjoying Hitchcock talk about his films is the raison d’etre of the book and so the film follows suit.

Truffaut is more sentimentalist than stylist, and Hitchcock may be considered just a craftsman, but together they complement each other’s worldviews and approaches, speaking “the same language” of craft as its own kind of artisanal vision. Shots of The 400 Blows seem to mesh seamlessly with shots of I Confess. While they are very different directors, the conversations as they appeared in print and on the recordings make it clear each other fully appreciate what it takes to put something meaningful on screen.

Aided by stock footage and numerous still photos, the film is a mini-primer on both men’s careers, in critical sync during the interviews (and Hitchcock had not yet entered his troubled mid-‘60s period at Universal). Jones injects interviews of filmmakers Martin Scorsese, Wes Anderson, David Fincher and Peter Bogdanovich (who would follow this template for his books on Ford, Dwan, and Welles) on their thoughts on the book and the films, reminding us this was a text referred by many filmmakers and critics for years, shaping not just Hitchcock’s reputation but filmmaking to come. 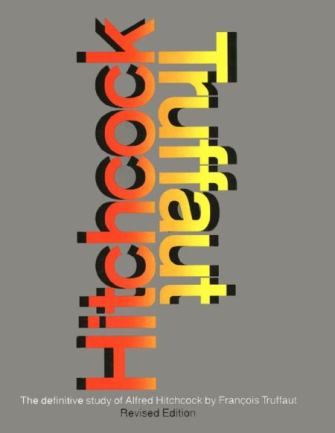 The balance of words, images, and attitude made the book accessible and definitive. Jones’s film, with its liberal use of the original recordings and well-chosen clips, manages the same balance, and brings a 50-year-old book to life. 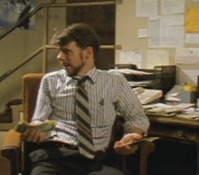 Roger Leatherwood worked in all levels of show business over the last 20 years, from managing the world-famous Grand Lake Theatre in Oakland to projecting midnight movies to directing a feature about a killer, Usher (2004), that won numerous awards on the independent festival circuit. He currently works at UCLA managing the instructional media collections, which is its own kind of show business. His film writing has appeared in numerous publications, including Bright Lights Film Journal, European Trash Cinema magazine, and his blog, mondo-cine.

Pat Hitchcock talks about her father in a 2014 one-hour interview at the Archive of American Television.

12 hours of audio from the original Truffaut-Hitchcock interviews, here.