This Saturday night, November 14, the Niles Essanay Silent Film Museum will screen the remarkable Raymond Griffith vehicle and Civil War comedy, Hands Up! An almost-always dapper and unflappable gentleman, Griffith could get into the most bizarre situations and get out of them again with seeming ease. And if memory serves (I haven’t seen the film in decades), Hands Up! is a minor gem.

Even today, when so much of the silent era is readily available over the Internet, Raymond Griffith is little known and his films are difficult to find. That we know about him at all is thanks to one book: Walter Kerr’s 1975 classic, The Silent Clowns.

I first read, and fell in love with, this fascinating survey of the history and art of silent comedy when it was new. I recently reread it. I still love The Silent Clowns, although I’m more aware of its – and Kerr’s flaws.

Kerr devoted his career as a critic and author to the live stage, but his first love was film. Born in 1913, he was just getting old enough to go to the movies on his own when Chaplin, Keaton, and Lloyd were making their best work.

Decades later, he revisited hundreds of silent comedies, noting what made them funny and what laid an egg. Then he turned this clearly enjoyable research into the definitive book on the genre.

He built his theory of silent comedy around what he called “the fact within the fantasy” and “the fantasy within the fact.” The fact is the actual, physical world recorded by an impersonal machine – the camera. You see real streets, real buildings, and real movie stars doing their own stunts. But the nature of cinema — especially two-dimensional, black-and-white, silent, hand-cranked cinema — separated the audience from that real world. What you saw on the screen seemed impossible, but you could see that it really happened in front of a camera. 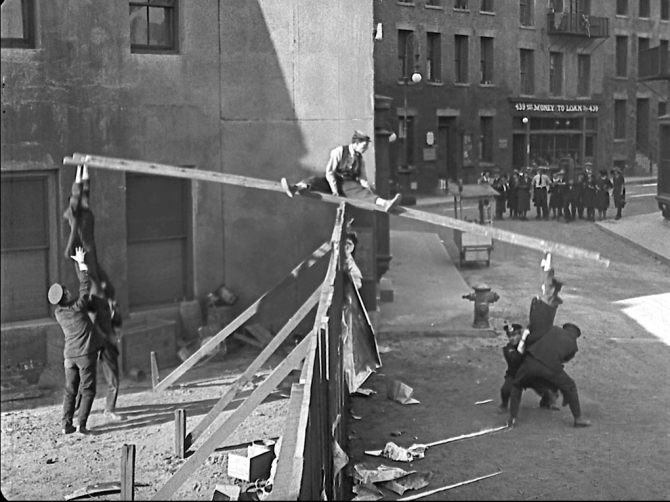 Not surprisingly, Kerr didn’t care much for special effects. He often berates a movie for using tricks rather than doing it for real. He mentions Walt Disney’s silent work only to explain why he’s not covering it. I doubt he would have cared much for animator/comedian Charley Bowers, who would not be rediscovered until after Kerr’s death.

Working roughly in chronological order, Kerr follows the big three – Chaplin, Keaton, and Lloyd – as their work evolves. He explains how they developed, discovered, and deepened their on-screen personas. To give you an idea where he puts his priorities, he devotes eight full chapters entirely to Chaplin, and six completely to Keaton. Keaton also shares a chapter with Fatty Arbuckle, and Keaton and Chaplin share another, covering The Gold Rush and The General. Lloyd only gets three chapters – the same as Harry Langdon.

Kerr clearly had a Lloyd problem. He treats the comedian as a hard-working man with no natural talent. “Chaplin defined himself in three years. Keaton managed it in not more than fifteen short films. Lloyd literally floundered through eighty to a hundred ten- or twenty-minute comedies before he even so much as glimpsed what he might honestly be about.”

That’s grossly unfair. Lloyd had no comedy experience before his film career. Chaplin was a successful British Music Hall comedian years before he ever stepped in front of a movie camera. Keaton was a famous vaudeville comedian before he turned six. If they floundered –and all new comics do – there is no visible record of it.

But Kerr appreciates Lloyd’s “hard work.” He explains the many ways that Lloyd learned to pull humor out of a character who wasn’t intrinsically funny, and then made his audience care deeply about that character.

Kerr is at his best when describing the evolution of Chaplin’s “tramp” character – noting, amongst other things, that Charlie is rarely shown explicitly as a tramp. (Kerr wisely refers to the actor/filmmakers by their last names, and their on-screen personas by their first names.) He describes Chaplin’s first unsuccessful experiments with pathos, how he pushed the envelopes of length and complexity in his First National period, and then went on to make the great features.

He describes Keaton as “the most silent of the silent film comedians,” so attuned to the form that “a smile would be as out of place as a shout.”

Kerr doesn’t limit the book to the big three. He has chapters devoted to the Sennett and Roach lots, two on Laurel and Hardy, and two chapters on lesser comedians who arguably aren’t worthy of immortality.

Which brings us back to Raymond Griffith – clearly Kerr’s major discovery. “Griffith seems to me to occupy a handsome fifth place – after Chaplin, Keaton, Lloyd, and Langdon – in the silent comedy pantheon, a place that is his by right of his refusal to ape his contemporaries and his insistence on following the devious curve of an entirely idiosyncratic eye.”

A lot has changed in the world of silent films since 1975. Kerr had to visit archives and get permission from preservationists to see all the films he needed to study. Today, all he would need is an Internet connection. While re-reading The Silent Clowns, I often turned to Fandor, Youtube, or my own DVD/Blu-ray/Laserdisc collection to watch something I had just read about. For silent film fans, 2015 is a much better year in 1975.

But Walter Kerr’s observations and opinions still have merit. This out-of-print but still purchasable book is still a must-read for silent comedy fans.

You can find The Silent Clowns in local used bookstores if lucky or via our affiliate program with Amazon.