Last year the Roxie scored a big hit with “The French Had a Name For It,” a first-ever all-French spinoff of longtime programmer Elliot Lavine’s popular U.S. noir retrospectives. Now Lavine and former editor of Noir City Magazine Don Malcolm are back with a second edition that is primarily the brainchild of the latter.

This edition is subtitled “Lovers & Other Strangers” for good reason: While many American films of the prime noir era focused principally on male-dominated criminal milieux and activities, the dozen features in “The French Had a Name For It 2” find that romance—or what passes for it—between the sexes can provide quite enough dark intrigue all by itself, with or without the genre’s usual elements of guns, gangsters and cops. Offering plenty of good lurid entertainment about bad relationships, the series runs Friday Nov. 6 through Monday the 9th. You would be well-advised to order your tickets or queue up early.

At least half the titles this time around (which cover a two-decade span from 1943 to 1962) extend noir fatalism to an institution that, at least in Hollywood, seldom received such treatment at the time: marriage. “If you are afraid of loneliness, do not marry,” Chekhov once wrote. That bleak verdict could apply to many of the wedded unions dissected and destroyed in these otherwise disparate melodramas.

Opening night alone provides a double dose of starry marital catastrophe. Made just before she’d conquer the world with husband Roger Vadim’s …And God Created Woman, 1956’s The Light Across the Street has young Brigitte Bardot as a jeune fille rather inexplicably besotted with Raymond Pellegrin’s very average-Joe truck driver. When a serious accident impairs his mental and physical health, he’s told to avoid all excitement; ergo it’s a very bad idea indeed to marry BB and settle down operating a truck stop where all the patrons ogle his bride nonstop. Who can blame them: She’s Brigitte Bardot! Of course, the husband’s paranoid suspicions lead to madness and tragedy.

The Truth About Our Marriage (La Vérité sur Bébé Donge, 1952)

That “B” melodrama of marital deterioration is a hotpot of sexual innuendo (and misunderstanding) compared to the cold soup of “A”-budget domestic warfare in Henri Decoin’s 1952 The Truth About Our Marriage (La Vérité sur Bébé Donge).Like Maneges (see below), it’s a tale told in flashback while someone lies on their potential deathbed. In this case Jean Gabin plays a business tycoon who’s been poisoned by his wife (Danielle Darrieux). Why? As we gradually see, there were plenty of reasons for loathing, albeit on both sides of a union that’s very hard to root for, as the husband is a callous womanizer and the wife a spoilt, shallow princess. This was the first significant teaming of these two great veteran French stars, and they certainly didn’t pick an easy, crowd-pleasing vehicle — despite its crime-drama framework, The Truth About Our Marriage is less an amour fou tale than a sort of hyper civilized proto-Who’s Afraid of Virginia Woolf?, in which its “till death do us part” protagonists manage to eviscerate one another with perfect decorum and almost no yelling.

In a mode similar to The Light Across the Street, there is 1958’s Cette Nuit-La (aka Night Heat or That Night), a programmer that was the only big-screen feature by prolific TV director Maurice Cazeneuve. In it, fashion magazine art director Maurice Ronet is driven frantic by suspicions that his cover-model wife Mylene Demongeot (one of many shapely blonde starlets washed ashore in Bardot’s wake, though hers would prove the more enduring career) is cheating on him. He’s wrong about that, but correct in assuming that their shared boss (Jean Servais) has exactly such designs on her. 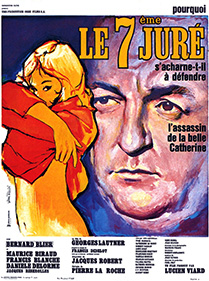 That dynamic is flipped in 1950’s Maneges aka The Cheat, which arrived smack in the middle of director Yves Allegret’s 40-year directorial career. Here, unattractive milquetoast Bernard Blier (father of Bertrand, famously envelope-pushing director of Going Places, Beau Pere, et al.) is blissfully unaware that his glam if low-class bride Simone Signoret only married him for his money. But when his business lies in ruins and his wife on her possible deathbed, her mother-slash-pimp (a memorable Jane Marken) reveals what a chump he’s been in a series of cruelly revealing flashbacks. Maneges ends with one of cinema’s great, gloating expressions of schadenfreude, directed at its two scheming women—and one wonders if there was something personal in that, since Allegret and Signoret divorced in real life shortly after its release.

Blier is the whole show in 1962’s The Seventh Juror, wherein his bored and boring provincial pharmacist spontaneously strangles to death a topless sunbather he chances upon—someone he doesn’t even know well enough to speak to, but whose sexiness around town has been a provoking thorn in his well-ordered life. When the unlucky woman’s boyfriend is charged with the murder, our protagonist finds himself on the trial jury, to his intense discomfort. An unspoken undercurrent throughout is the raging discontent Blier feels against his perfectly respectable existence, including a model-bourgeoise wife and two teenage children. It’s a “trap” even harder to escape than a murder rap.

The principals in Henry Verneuil’s 1955 Lovers of Lisbon are, uniquely, survivors of both: Daniel Gelin’s expat Parisian cabbie and Francoise Arnoul’s upscale tourist widow in Portugal are haunted free agents, suspected of foul play after the deaths of spouses. (And Trevor Howard’s Scotland Yard detective is still pursuing her on that charge.) The question of guilt hangs ambiguously over a somewhat turgid drama redeemed by a fine final turnabout.

Gelin, an interesting actor whose successful long career contrasted with his very messy, scandal-plagued personal life, is even more central to the 1957 “B” thriller Three Days to Live. In it, he’s an actor in a third-rate theatrical company who suddenly gains notoriety when he’s witness to a gangland killing. But he soon regrets the publicity boost when the man he’d fingered for the murder (perpetually mobster-cast Lino Ventura) escapes prison to wreak revenge. Just before Louis Malle’s The Lovers made her an international name, Jeanne Moreau has a dull role as Gelin’s romantic interest.

Entertaining (and sometimes disposable) as pulp paperbacks now, some of these films are admittedly uninspired, and were despised as symptoms of a fossilized French film industry by the critics-turned-filmmakers who would drive the imminent Nouvelle Vague. Their derision would commit much postwar, pre-60s French cinema to a dustbin of largely-forgotten product from which they’re still being slowly salvaged.

Sometimes the movies are more or less guilty as charged: While we may enjoy them for other reasons now, it’s hard to dismiss the complaints of New Wavers like Truffaut or Godard that films like The Seventh Juror, Three Days to Live, Night Heat or Lovers of Lisbon are often stylistically stale, studio-bound efforts too little differentiated from TV-series professionalism. But that can hardly be said about the era’s lesser-sung Gallic melodramas, such as two in the Roxie program that coincidentally both rely greatly on flavorful seaside location shooting.

Neither The Wicked Go to Hell (1955) nor Troubled Waters (1949) are great films, but they’re fine examples of atmospheric, inventive direction and strong onscreen personalities elevating sketchy material. The first was a directorial debut—made the same year as his international acting breakout in Jules Dassin’s Rififi—for Robert Hossein, a handsome industry staple on both sides of the camera. Henri Vidal and Serge

Reggiani play convicts who break out of prison, then hole up at a remote beach shack where they find an artist (who doesn’t survive the encounter) and his presumed mistress (Marina Vlady, who wed Hossein that year—the first but far-from-last marriage for each of them). The nearly-mute, ravishingly beautiful latter drives a wedge between the two intruders, bringing destruction to all. There’s a perverse, pleasing primal quality to this evil-Eve-meets-two-armed-Adams tale, one without any psychological depth whatsoever. It’s simultaneously silly and striking.

Likewise, Bulgarian-born Henri Calef’s Troubled Waters casts an enigmatic spell over the alluring-yet-repellant presence of Ginette Leclerc as a woman who returns to her small fishing village from the big city (where, natch, she fell into “ill repute”) in order to discover what killed the brother she was…um, a little too fond of. Not entirely satisfying in narrative terms, it’s nonetheless a memorably sour, cynical community sketch that’s as fragrantly bracing as being slapped in the face with a dead mackerel.

Last but hardly least are three films by a trio of legendary French film directors, all of which have been more admiringly re-appraised since their original, somewhat hostile reception. 1943’s Le Corbeau (The Raven) was an early film by French suspense master Henri-Georges Clouzot that was nearly his last: While a popular success, it was denounced as anti-French during the Occupation (partly because it was produced by a German company), its maker banned from further work in the industry for several years. (When he returned, however, such international triumphs as Diabolique and The Wages of Fear overcame any remaining political antipathy.) That reaction is understandable, because Le Corbeau is a ruthlessly incisive and ingenious dissection of a “normal, respectable” town’s many hypocrisies. When a series of anonymously written “poison-pen” letters seems to reveal a number of unpleasant truths—from infidelities and hypochondria to abortion services and even murder—the finger-pointing grows to epidemic proportions.

A similar malicious campaign of innuendo leads toward a superb climax of vigilante mob “justice” in Julien Duvivier’s 1946 Panique, the Pepe le Moko director’s return to France after a wartime Hollywood sojourn. This Georges Simenon-based story (later remade by Patrice Leconte as 1989’s acclaimed Monsieur Hire) has Michel Simon as a suburban neighborhood oddball suspected of a local spinster’s slaying—when in fact that crime was committed by the ne’er-do-well boyfriend of the woman (Viviane Romance) Simon haplessly tries to woo. Its fabulously bitter fadeout apparently struck a sour note amongst critics and viewers at the time, though Duvivier’s fortunes would revive in the next decade. 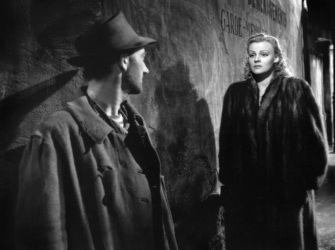 Less lucky was Marcel Carne, whose 1930s successes were capped by the extraordinary achievement of 1945’s Children of Paradise, an enduring epic made under near-impossible conditions during and just after the German Occupation. Released the following year, Gates of the Night comingled that film’s romanticism with a tougher, more noirish postwar atmosphere. But the expensive production was dogged by difficulties—not least the replacement of anticipated, no-show superstars Gabin and Marlene Dietrich by unknowns Yves Montand and Nathalie Nattier—then branded a pretentious flop upon release. (Montand, whose performance looks pretty good today, eventually rebounded from the slamming reviews; but his pretty co-star’s career never quite recovered.)

Alternating between humorous naturalism and artificial, overheated melodrama, Gates of the Night is now more interesting as a stylistic experiment than it is successful as storytelling. But it’s the kind of semi-folly that still fascinates for its flaws as well as its strengths, while less ambitious films are easily digested and forgotten.

Full trailers for many of  the films below.