William Castle, B-movie producer-director of sainted memory, occupies the almond in the Venn diagram where Hollywood meets the circus. 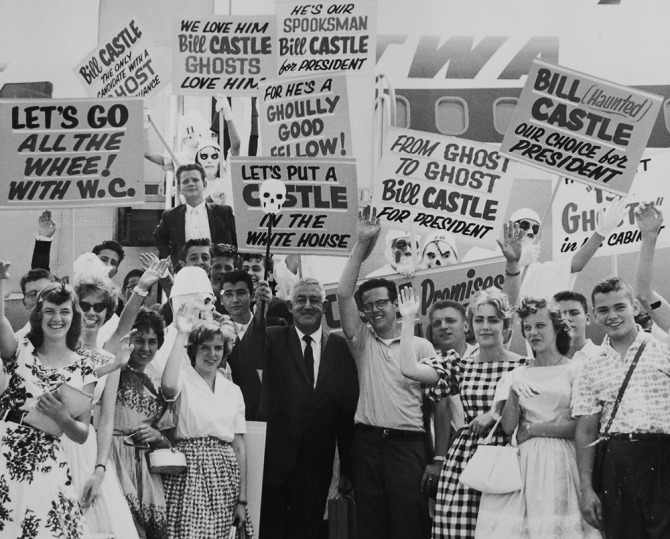 At Harry Cohn’s Columbia in the ’40s and ’50s, Castle turned out dozens of programmers, from westerns to crime dramas to the 3-D Drums of Tahiti . He might have been doomed to a contract director’s anonymity forever, but he changed his luck and began his legend in 1958 with Macabre . The shoot was characteristically quick and thrifty, but this time there was a gimmick: every moviegoer was insured by Lloyd’s of London for death by fright, and the theater lobbies were staffed with nurses.

Macabre made money, and Castle followed up with a string of gimmicked successes. House on Haunted Hill (with Frank Lloyd Wright’s Ennis House in the title role) featured “Emergo,” a process whereby ghosts and skeletons would “come off the screen, wander around and meet the public.” In practice this came down to a plastic skeleton sailing over the audience on a wire. People threw things at it, but they’d already bought their tickets.

For 13 Ghosts , in “Illusion-o,” the audience got cellophane “ghost viewers.” For Homicidal , theater lobbies had a “Coward’s Corner” that gave refunds to those too scared to watch the last fifteen minutes. For Mr. Sardonicus , moviegoers were issued “ballots”—pictures of a thumb—to hold up or down and vote on the villain’s fate. At the climax of the picture, Castle appeared on screen to peer into the audience and “count” the votes, putting the Living Theater’s assaults on the fourth wall to shame.

His greatest achievement, gimmick-wise, was The Tingler . In Jeffrey Schwartz’s excellent documentary Spine Tingler! The William Castle Story , John Waters calls The Tingler “the best movie ever made,” while Joe Dante points out the cast’s remarkable achievement in delivering the dialogue with straight faces. 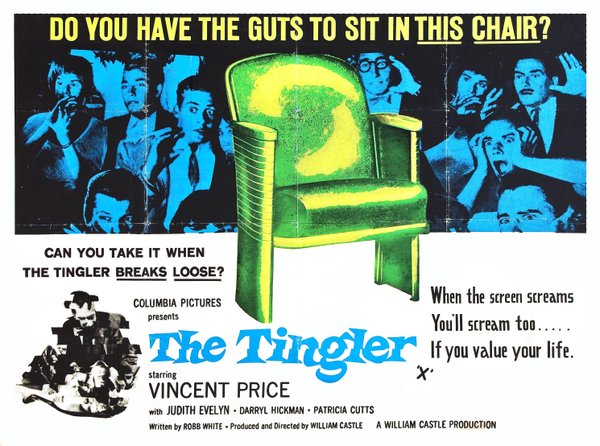 The movie’s conceit was that the human body’s reservoir of fear was (an organ? an animal? anyway…) called the Tingler, located at the base of the spine. The Tingler on screen was essentially a scorpion pull-toy whose wires were showing, but before the film premiered a team of technicians went around to theaters installing joy buzzers in seats. When Vincent Price shouted, “Scream for your lives! The Tingler is loose in this theater!” the projectionist pushed the button, and zap: bedlam.

Joe Jordan’s Showmanship: The Cinema of William Castle does the heroic task of providing detailed synopses of more than fifty of Castle’s movies. As a concentrated reading experience it has its disorienting side, since many of these B programmers have plots that leave logic and coherence in the dust, but as scholarship it’s a welcome addition to Spine Tingler and Castle’s own enjoyable memoir, Step Right Up! I’m Gonna Scare the Pants off America .

Today the nearest descendants of William Castle pictures probably aren’t movies at all, but video games. The performances may be wooden, but by putting the audience in the action they’re outgrossing movie theaters … which are fighting back by dusting off the William Castle playbook and going completely nuts with it. So please, whatever you do, don’t reveal the ending—it hasn’t happened yet. 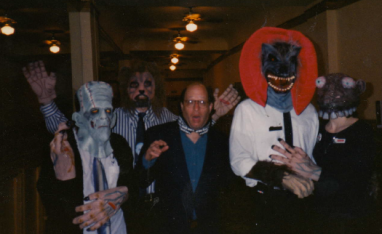 Haas and friends at a UC Theatre screening of Matinee.

Charlie Haas’s writing has appeared in New Yorker, Esquire, Mother Jones, National Lampoon, New West, The Threepenny Review, and Wet: The Magazine of Gourmet Bathing, among many other journals. His screenwriting credits include Over the Edge, Tex (both with director Tim Hunter), as well as Joe Dante’s Gremlins 2 and Matinee. His books include The Soul Hit (with Tim Hunter), Over the Edge (with Tim Hunter), What Color Is Your Parody?: A Self-Harm Manual for Job-Hunters and Career-Changers and most recently The Enthusiast (read an excerpt here). Haas can be followed on Facebook. He lives in Oakland with his wife, the writer and editor B. K. Moran. 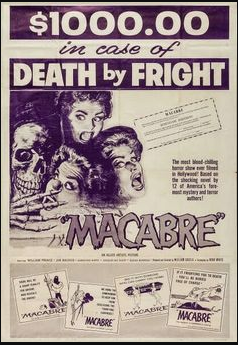