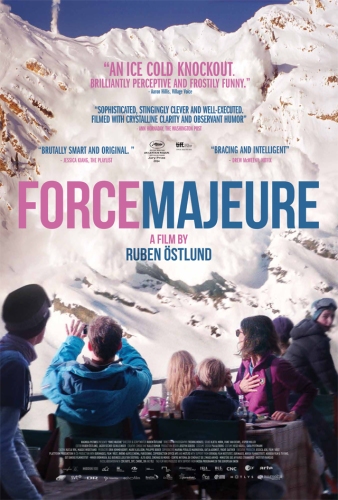 Force Majeure opens in darkness. We hear only voices until, one by one, our main characters ski into the frame. First young Harry, then his parents, Tomas and Ebba, with his sister Vera, last to appear.

Moments later, the sun rises over the snow-dusted Alps. We see the glowing lights of a ski resort in the valley below. Idyllic? Hardly. In an instant, we’re hit with frantic accordion rendition of Vivaldi’s Four Seasons , joined by the staccato firing of cannons.

We see the family of four wake, brush their teeth in silence, head down to breakfast. We hear Ebba tell another guest in the lobby that Tomas works all the time, that they’re at the resort so that Tomas can, at last, spend some time with the family.

In an earlier scene, Harry falls apart, having not had any lunch. In another, Vera calls out for help as the family leaves her behind. We see Tomas, impatient, aloof, checking his phone.

Through the eyes of this couples therapist, none of this is good news.

Not the music that chimes in at odd times, nor the cannon fire that cannot help but seem ominous. Nor all the edginess and evidence of disconnection that plays through every scene. It matters little that the four of them ski down the mountain in near-perfect unison, or wake in one bed wearing matching pajamas. Everything points to the fact that this is a family in trouble, a family poised to come apart at the seams.

And come apart they do, in ways that neither they, nor we, are quite prepared for.

In most disaster stories there’s, well, an actual disaster. A tornado levels an entire city. A tsunami sweeps screaming thousands into sea. In Force Majeure what occurs is an “almost” avalanche, a disaster averted—a near miss for all but our troubled family of four.

The very facts make us wince. The family sits in an open-air restaurant, as a “controlled” avalanche becomes a thundering, fast approaching wall of snow. Tomas grabs his ski gloves and cell phone and runs for his life. People scream, chairs tip over, the screen goes solid white. We hear only whimpers. Then…everything’s fine. Nobody’s hurt. The mist clears, they dust the snow from their jackets and breakfast plates and life goes on.

Still, we’re horrified. Wide-eyed. “Where’s Daddy,” Harry asks. Seconds later, Tomas lumbers back to the table. “Are you alright?” he asks, but no one responds. He laughs nervously, desperate to make light of what’s happened. “Ah,” he eventually says. “Here comes the sun.”

But sunny it’s not. Tomas has, unfortunately, begun his own uncontrollable slide.

We watch Tomas obscure the facts, feign innocence, and then out and out lie, saying he never fled the scene, that it’s simply not true. As Ebba continues to press for the truth, Tomas grows more and more adamant that he’s been wrongly accused. We see Ebba unable to talk about anything else, talking to strangers, then friends, all of them incredulous at how Tomas behaved, none of them able to take Tomas’ side. Soon, the children begin to crack under the strain.

“This is perfect!” I said to my husband, as the two of us watched Tomas dig himself deeper and deeper into his hole.

By “perfect” I meant that Ostlund, the film’s writer/director, had nailed it. Every line was one I’ve heard clients speak in my office, each as stark and infuriating as the one that preceded it. “You have your version and I have mine,” Tomas smugly insists. “What are you upset about?” he continues to ask. “No one was hurt.” These are the things people say when the truth is unspeakable, when they’re hoping to skip over the part where they’ve betrayed their own values, where they’ve let others down, where they’ve done something that cannot be undone. “Why can’t we simply move on?” people ask.

I find it almost intolerable to watch actors portray therapists. The interventions are, with rare exception, facile and trite; the cures, impossibly swift. I feel the same way about family dramas that offer up gratuitous misery, designed to bring us to tears—all a busman’s holiday for someone in my line of work.

My reaction to Force Majeure was, in all honesty, pure delight. Witnessing this exquisitely-crafted unraveling, this fearless exposure of human frailty and folly, seeing the raw shows of emotion and the depths to which people will sink, was nothing short of exhilarating.

The script is brilliant, every visual, every word spoken, perfectly placed. Then there’s the humor, biting, ironic, scenes of the couple arguing in the hallway in their underwear, hoping to stay out of earshot of the kids and instead being observed, more than once, by the mildly disdainful janitor.

Most powerful, is what the film demands of its viewers—the issues it raises, the questions it asks, and the dark places in ourselves it dares us to explore.

Over coffee and dessert, on the long drive home from the theater, days later, with friends, couples will turn to each other and ask, “What would you do?”

Most of us will imagine ourselves to be heroes. We’ll envision ourselves loyal and courageous. We’ll assume that, no doubt, we would put our life on the line for the ones that we love. We forget that terror is a powerful thing. When threatened, our good sense can be overrun by our fight-or-flight instinct, whose job it is to make sure that we survive.

Few of us will sympathize with Tomas, for to do so, we would have to admit that we, too, can be self-protective, disloyal. We’d have to acknowledge that under extreme pressure, we too might sink below our own bottom line. Instead, we will judge him—for his lack of “manhood,” his pride and the weakness it covers, for his cold-hearted attempts to make his wife into the villain, and for his inability to, at least after the fact, do the right thing.

Some couples may watch the movie end up in a fight, their own betrayals and abandonments stirred up by what Tomas and Ebba were unable to resolve. Couples for whom trust is an issue, couples dealing with infidelity, lies, or other profound betrayals, may well find themselves taking sides, bringing Tomas’ self-pity and selfishness, Ebba’s disgust into their own struggle, setting off an uncontrolled avalanche of their own.

As a legal term, force majeure implies an act of God, an uncontrollable accident, a circumstance under which we cannot be seen as culpable. In marriage, this out-clause simply does not exist. We cannot claim that our actions should be consequence-free, no matter how extreme the duress.

All we can do is be honest about our failings and the failing of others. We can apologize for our mistakes and have the generosity to forgive. We can look at the ways we idealize each other, the ways we want to turn away from weaknesses, the ways we try to cover our shame. We can face what Tomas and Ebba lacked the courage to face.

Winifred M. Reilly, M.A., MFT, is a psychotherapist specializing in marital therapy and relationship issues, with a private practice in Berkeley, CA.

She writes for The Huffington Post and The Good Men Project and is completing a book that explains why relationships are so frustrating and difficult, and shows what couples can do besides throw up their hands or divorce. Check out her advice blog: Speaking of Marriage.

Like another acclaimed fall movie, Force Majeure dwells in the fissures and fault lines of a marriage. As in Gone Girl, we see a couple-in-crisis from a chilly, detached distance. Ruben Östlund may be torturing his characters for his own amusement, his Swedish contender for the Best Foreign Language Oscar is also a scorchingly funny farce.

Tomas (Johannes Kuhnke) and Ebba (Lisa Loven Kongsli) and their two perfectly blond children are vacationing at a French Appalachian ski resort for the bored and affluent. They’re lunching en plein-air when an avalanche comes barreling down the mountain. Here the film’s central conflict is established in about 10 seconds, as the panic-riven Tomas grabs his phone and his wallet and scampers off, leaving his wife and kids alone and afraid in a blanket of snow. Just like that, Tomas has killed his marriage.

While the sequence is certainly spectacular—rivaling even the romantic apocalypse of Lars von Trier’s Melancholia—Ruben Östlund is more interested in the marital ruination that follows. The incident sends Ebba into full meltdown mode as Tomas refuses to admit defeat, spouting bull about animal fight-or-flight instinct while leaning on typical male rhetoric to dispute her increasingly drunken recreations of what happened. Do you really know your partner? That’s one question you’ll be turning over in your head in bed at night after the movie.

Things take a hilarious detour into gender-debate territory during Tomas and Ebba’s uncomfortable evening with a young, hipsterish couple (Kristofer Hivju and Fanni Metelius). Alliances are established: clearly men share one side of the story, women the other, and nothing in between. But just when they’re finally starting to get somewhere, a toy helicopter belonging to the kids comes zooming into the room and literally crashes the conversation. And scene.

This is Östlund showing his hand as well as his sick grin. His static camera and the muted winter canvas obviously bring to mind The Shining. But this is a far more voyeuristic domestic horror show. If Jacques Tati, ever the master of orchestrated chaos, attempted an intimate chamber comedy, it might look like Force Majeure . Östlund uses recurring bits from Vivaldi’s Four Seasons not for its majesty, but for the faux-bravado such classical music has come to represent. His scene-setting is icily precise until he lets the cards fall where they may. A double dinner date, with couples pitted opposite each other at the table, becomes the stage for histrionic, wine-induced, psychodrama dinner theater.

Performance, in fact, is a mask for the couple but also a weirdly contradictory invitation to truth-telling. Ebba can only speak hers when she’s in the company of other people. She wants an impartial authority to tell her that she’s not crazy, and that her husband is a phony and a clown. But Ebba is also knowing and wise, and she loves an audience. The outstanding Norwegian actress Lisa Loven Kongsli relishes these scenes with unhinged fervor and delight. You almost wish “Amazing Amy” Dunne would’ve considered dealing with her issues in like fashion.