Bay Area art-film aficionados and armchair adventurers are in for a treat. The six-month trip to Georgia is ready for take-off.

That former Soviet Socialist Republic, nominally best known in the West as the homeland of Joseph Stalin, is also the wellspring of a rich, varied history of film production, from the silent era of the 1920s to the present. Unfortunately, the chief talking point for Georgian film is that it is relatively unheralded in the competitive world cinema scene. But now the Berkeley Art Museum/Pacific Film Archive—in collaboration with New York’s Museum of Modern Art—is ready to remedy that with “Discovering Georgian Cinema,” a monumental retrospective series of some fifty titles, beginning Friday, September 26 and running until late Spring, 2015. Stand by for the rare, the authentic, and the unabashedly gorgeous.

THE WISHING TREE (1977). Courtesy of National Archives of Georgia.

Let’s start with the gorgeous. Tengiz Abuladze’s The Wishing Tree  (1977), subtitled “Scenes from the life of a pre-Revolutionary Georgian village,” combines the country’s dramatic mountainous scenery with typically broad Soviet-style characterization for a panoramic and often humorous portrait of country life, with a nod to the painter Niko Pirosmani, in whose hometown the action is set. The episodic tale is rich with lusty, sharply-drawn characters, from a beautiful female visitor and a domineering sheep rancher to the lecherous priest and Pupala, the town slut. Picture Fellini’s Amarcord , only harsher. It screens in a special lecture presentation on October 20, and then again on November 1, followed on November 2 by Giorgi Shengelaia’s 1969 biopic Pirosmani .

Just as beautiful to look at is Nikoloz Shengelaia’s 1928 silent Eliso , a historical epic that goes a long way to explaining the root of modern Russia’s “Chechen problem.” It takes place in 1864, as the Tsar’s officials scheme to unjustly deport the Chechen people from their ancestral home in the Caucasus to Turkey (with the idea that Muslims belong with other Muslims). The title heroine, a lovely Chechen maiden, falls in love with a Christian, against a bloody background of cattle rustling, arson, and nonstop sword fights, featuring Shengelaia’s trademark staccato editing and a wealth of ethnographic detail, including a frenzied dance sequence. The rousing Eliso  receives its West Coast premiere October 25 at BAM/PFA, with a second showing the following day. The film is presented with live musical accompaniment performed by Trio Kavkasia and adapted from traditional folk songs by Carl Linich.

As pointed out in the series’ brochure by MoMA’s Jytte Jensen, co-organizer of the series along with BAM/PFA senior curator Susan Oxtoby, the film community in that now-independent country of five million has been largely a family affair since the very early days of the motion picture. The name Shengelaia appears again and again, as directors begat directors and filmmakers married actors. The White Caravan , made in 1963 by Eldar Shengelaia (son of Nikoloz and brother of Giorgi) and Tamaz Meliava, is an exalted village picture, with striking compositions and a moving camera, that nearly becomes a gone-from-the-village-and-never-coming-back pic. A close-knit family of sheep herders drives its flock from its mountain home village to market on the Caspian Sea, and along the way the patriarch’s headstrong son pairs up with a lowland woman and abruptly seeks to opt out of the family traditions. Whereupon trouble ensues. Co-director Shengelaia—who appears in person for the September 27 show—gives his poetic saga echoes of the French New Wave as Glakho and Maria face the temptations of the big city, but the clan dynamics and the folk dancing are pure Georgian.

“Discovering Georgian Cinema” is organized into three main cinematic periods: the silent era; the time of renewed narrative emphasis in the post-WWII 1950s through the 1980s; and today’s contemporary Georgian industry. Ivan Perestiani’s energetic 1923 silent Little Red Devils  is a prime example of the former. During the 1918 Civil War—then, as now, it was Russians fighting Ukrainians—a pair of impressionable, idealistic brother-sister siblings named Misha and Duniasha enlist in the Red Cavalry to fight for the Revolution, lured by the adventure of it all. They are joined, in an unlikely plot turn, by an acrobatic African-American sailor named Tom Jackson, on leave from his ship, and the three of them flummox the Ukrainians and their rascally German co-conspirators, despite cliffhangers involving torture and boxing matches. Whew. It’s like Eisenstein crossed with the Keystone Kops. Little Red Devils  plays October 4. 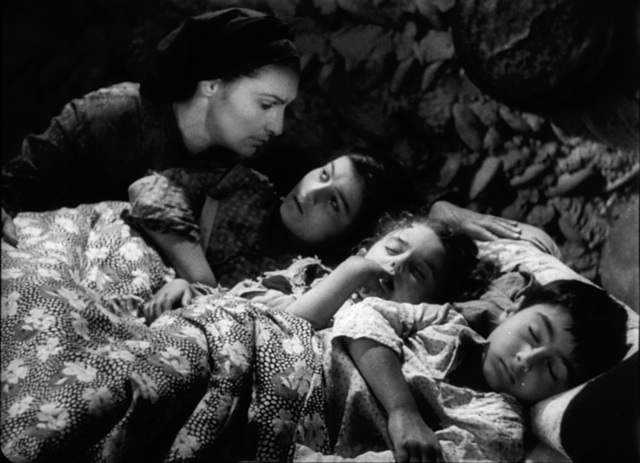 The 67-minute social drama Magdana’s Donkey , directed by Rezo Chkheidze and the prolific Tengiz Abuladze, won the “Best Fiction Film—Short” award at Cannes in 1956. Maybe the French admired the story of a poor widow (played by Dudukhana Tserodze) and her kids eking out a living selling yogurt, and what happens to them when they find a discarded, abused donkey by the side of the road. Or maybe they, like us, were impressed with the film’s naturalism-meets-melodrama plot mechanics. Compares well to the Italian Neo-Realistic and Mexican folkloric movies of the day, particularly in the antics of the cruel merchant. See it October 17, followed by Abuladze’s majestically pictorial medieval tone poem/epic of Christians versus Muslims in the Caucasus Mountains, Molba .

Another Abuladze effort, the anti-realistic political fantasy Repentance , has a few powerful moments, but plucking them out of the protracted 153-minute running time requires a lot of patience. An overbearing Stalinist official destroys a family out of jealousy, and ends up paying for his crime after death when the vengeful surviving daughter repeatedly exhumes his corpse. Politically daring for its time but cinematically rather stale, the artistic freedom implied in this drama (made 1984-1987) is a lot more interesting than the film itself. It shows September 28.

We asked co-organizer Susan Oxtoby to characterize the point of view of Georgian national film. “There’s a really endearing character to many Georgian films,” she replied. “There’s often a lightness of spirit, a joie de vivre, and a tender, intelligent way of depicting familial relations on screen. There’s also a soulfulness that is unmistakable and deeply affecting. This passion is present in Georgian folk singing and comes through in many of the films, too.”

The series opens Friday, September 26 with Eldar Shengelaia’s Blue Mountains , featuring the director in person. The 1984 feature, in Georgian with English subtitles, is a hilarious example of the gentle, character-filled Eastern European comedy that pokes fun at bureaucracy. The government-run publishing house in Tbilisi is a crumbling warren of offices where editors and staff play chess, learn French, cook snacks—anything but make a decision on even the smallest matter. The janitor is the only one who ever actually reads a manuscript. Shengelaia directs it toward its benignly chaotic crescendo with a gift for physical comedy. Shengelaia also contributes the 1968 An Unusual Exhibition , the story of an unsuccessful fine arts sculptor named Aguli Eristavi (played by Guram Lortkipanidze) who resorts to carving elaborate tombstones in order to feed his growing family—another veiled commentary on the workings of the Soviet system. It plays September 29.

The above are just a smattering of the offerings in the ambitious series, the largest retrospective of Georgian film ever presented in North America. Assembled from BAM/PFA’s sizable collection of Georgian films from the Soviet era, as well as prints and research materials on loan from archives in Georgia, Russia, Germany, the Netherlands, France, the UK, and Italy, “Discovering Georgian Cinema” continues this fall with works by Noutsa Gogoberidze, Levan Koguashvili, Leo Esakya, Mikhail Kalatozov, and Teimur Babluani, among many others. The series resumes in mid-January next year, with Soviet-era films by the internationally renowned Otar Iosseliani, plus the 21st-century offerings of such filmmakers as Nino Kirtadze, Salome Jashi, Nana Ekvitimishvili, and Zaza Urushadze.

A retrospective this rare and this comprehensive only comes around once in a lifetime. “Georgian films are extremely difficult to see in film theaters, because there are very few existing 35mm prints,” said Oxtoby via e-mail from Moscow. “It is remarkably difficult to assemble a large retrospective such as this one. That’s all the more reason to see the films now.” The University of California’s BAM/PFA is one of four stops for “Discovering Cinema” on this continent. It opens at MoMA in New York on September 23; at the National Gallery in Washington, DC in January; and at the Toronto International Film Festival Cinematheque in Toronto in April, 2015. The BAM/PFA portion of the series is supported in part by the Andy Warhol Foundation for the Visual Arts and the National Endowment for the Arts. For up-to-date schedule and details, visit bampfa.berkeley.edu.

Kelly Vance fell in love with flickers the day he saw Cecil B. DeMille’s  The Greatest Show on Earth at El Rancho Theater in Culver, Indiana, and he’s been trying to catch up with the world’s cinematic output ever since.  When he’s not at a screening or a film festival he writes for the  East Bay Express (where he is the chief film reviewer) and the Film Noir Foundation’s Noir City e-magazine.  He’s a member of the San Francisco Film Critics Circle.