Everyone has a favorite San Francisco movie, whether it’s Vertigo  or Mrs. Doubtfire . Later this month, the Castro is showing two 1960s titles that are lesser remembered now, though both were major releases at the time. Together, they provide a couple more fascinating perspectives on a city that alters character with each film it backgrounds.

First up is 1962’s Experiment in Terror , made just before the Pink Panther movies identified director Blake Edwards almost exclusively with comedy. It was sandwiched between two more prestigious projects, the Truman Capote-derived Breakfast at Tiffany’s and the grueling substance-abuse drama Days of Wine and Roses . By contrast, Experiment is “just” a thriller, albeit one considered fairly harrowing—if less so than the prior year’s Psycho . (But then, no prior movie had ever been as harrowing as Hitchcock’s masterpiece.)

It begins with a discomfortingly long opening sequence in which Kelly Sherwood (Lee Remick) is assaulted in her dark garage by a faceless stranger. He threatens to take her life and that of her teenage sister (a very young Stefanie Powers in one of her first roles) if Kelly, who works at a bank downtown, doesn’t rob that institution for him.

Despite his threats, she does manage to contact the FBI (as represented by Glenn Ford’s world-weary agent), but the raspingly asthmatic-voiced perp seems to know everything she does. Needless to say, whether the Feds can identify and apprehend him before he kills one or both of the young women is a matter of tension down to the last minutes.

Experiment in Terror, which was purportedly a big influence on David Lynch, is part procedural, part ’60s psycho-shocker, and part verité-influenced noir—the final sequences are naturalistically staged in a way that would become more common later in the decade. It shows its age in the heavy suggestion of potential rape, and in the almost absurd sexual skittishness of the villain when push comes to shove. (The Production Code was still very much in effect in these pre-MPAA ratings days.) The police surveillance techniques seem stupefyingly obvious at times.

But as a whole, Experiment in Terror‘s well-oiled suspense machine still works. From today’s perspective, equally interesting is the portrait it paints of a dress-up, pre-counterculture town still affordable enough that we don’t laugh out loud at the idea of a bank teller and her high-school student sister living in a nice freestanding house (with garage!) that they presumably own. They drive everywhere—and there’s parking. 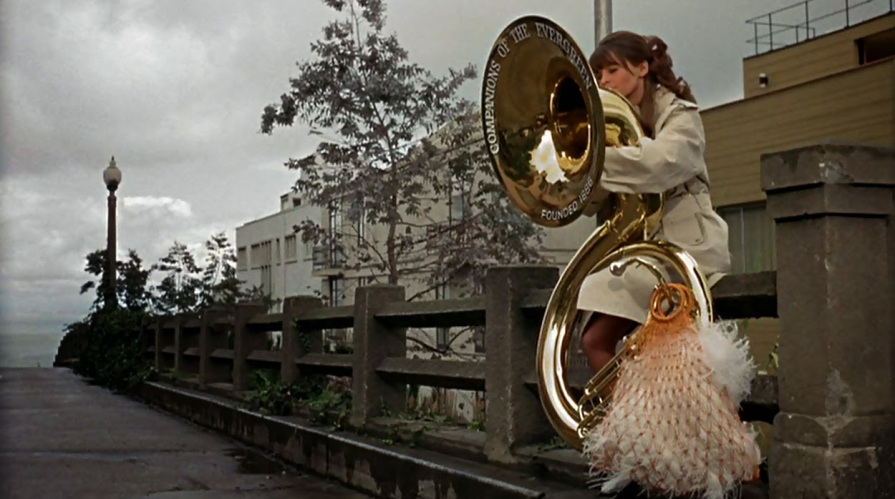 Six years later, Petulia finds San Francisco transformed. It’s now an endlessly picturesque but cold mecca, where socialites and hippies are equally-jaded prisoners of paradise. (They cross paths in the opening charity-ball scene, in which no one seems particularly impressed that Janis Joplin’s band Big Brother and the Holding Company are playing for their bejeweled amusement.)

Julie Christie plays the titular figure, whose affectations of free-spirited “kook”-dom—breaking a window to steal a tuba on a whim, for instance—are a thin camouflage for her desperate unhappiness. Running from recent wedlock to a Prince Charming (Richard Chamberlain) who’s turned out to be an abusive monster, she attaches herself like unwanted flypaper to a surgeon (George C. Scott) who himself has just left a stable marriage, out of sheer ennui.

With gorgeous Christie in her extravagant fashions and all of 1968’s San Francisco exotica on tap, directed by the man who’d given us the Beatles’ movies, Petulia promised a groovy time capsule.

That it is, superficially, but the movie suggests all this “swinging” is a hollow pose, unsatisfying to anyone not too young and stoned to know better.

Petulia was the last film photographed by Nicolas Roeg before he embarked on his own notable directorial career, and he was clearly influenced by its unpredictable, non-chronological editorial rhythms. (His unsettling 1980 not-quite-love story Bad Timing also bears general resemblance to Petulia in story and themes.)

This was the most substantial material Richard Lester ever took on, and it remains his best film—a hard bubble of adult emotions compared to the mod faddishness of his prior British films, let alone the frantic silliness of such later efforts as Superman III . (Though still alive, he retired over twenty years ago, saying he’d never really enjoyed directing.) In later years, Lester recalled that his contract stipulated “final cut, total artistic control,” only to find upon delivering the finished movie that a dismayed Warner Brothers was “rather surprised with what they’d done. They said something like, ‘Yes, I know we signed it, but we didn’t actually mean it.’ Too late.”

Cautiously admired at the time by critics, albeit politely ignored by most audiences, who like the studio had no doubt expected something more frolicsome, Petulia  now seems a classic of its era. No one in this movie does any drugs (non-prescription ones, at least), but while they may be oblivious to the “Summer of Hate,” their Summer of Love never began. Now they’re stuck in an endless bad trip of modern American life, privileged yet pointless.

Thank you to reelsf.com for some of the images featured in this piece.

Dennis Harvey has been publishing film reviews since the era of the typewriter.  He’s a member of the San Francisco Film Critics Circle and currently writes for  Variety, the  San Francisco Bay Guardian, and  Fandor.

2 thoughts on “The City as Character: EXPERIMENT IN TERROR and PETULIA Make You Look Twice at San Francisco”