[With the release of writer / director Ritesh Batra’s debut feature The Lunchbox  (2013) on Blu-ray™ Combo Pack and Digital earlier this month from Sony Pictures Home Entertainment, EatDrinkFilms  invited Patty Unterman to watch and respond to this poignant story of two lonely people in India who find themselves corresponding when one of Mumbai’s dabbawallahs  (lunchbox deliverymen) makes a one-in-a-million delivery mix-up. –ed.]

The Lunchbox  shows how love can help transform the unlikeliest of people.  An official selection of the Cannes, Toronto, Telluride and Sundance Film Festivals, The Lunchbox  Blu-ray Combo Pack offers an exclusive commentary track featuring Batra, which readers of EatDrinkFilms will find a welcome companion to Batra’s essay “A City of Miracles” (Parts One and Two).

The Lunchbox : A Chef’s Response

In the opening minute of The Lunchbox , we see a Bombay housewife hurriedly send her young daughter off to school in a tuk tuk , then rush to the stove where she pulls off the regulator of a pressure cooker, twists off the top, dabs her palm with the creamy orange curry inside, and licks.  At just at that moment we hear a squawky female voice from the open window.

“Did you remember the spices?”

“Auntie,” the housewife shouts so she can be heard upstairs through the window.  “I think I forgot something.”

A basket on strings appears at the window with a jar of red spices.  Our cook, Ila, grabs it.  Just as she’s about to put a big spoonful into the curry, Auntie yells, “Just a little.”

Ila sprinkles in a pinch, stirs and instantaneously we hear Auntie say, “Ah.  It smells perfect now.  One bite and he’ll build you the Taj Mahal.”

At that moment, I, a cook, fell for first-time director Ritesh Batra’s film, The Lunchbox.  This film got the actual cooking right.  Upstairs Auntie, a keen-nosed member of the cooks’ sisterhood, is trying to help her downstairs neighbor win back the love of her husband with invigorated cooking, specifically via the stacked, stainless steel lunch box or tiffin  delivered to his office each day.  Since Auntie stays upstairs caring for her stroke-afflicted husband, she does it solely by smell.

I love the way Ila and Auntie communicate through smell, the cook’s gold standard, which tells Auntie when the curry achieves full flavor and depth.  The “recipe” is the back-and-forth between two cooks who share a culinary language.  One knows where she wants the dish to go and the other, how to get there.

Of course, both of these characters, as do all good cooks, understand the power of food, the seduction of aroma, the emotion released by certain dishes.  But, as so few movies do, The Lunchbox  captures smell and taste on screen convincingly. 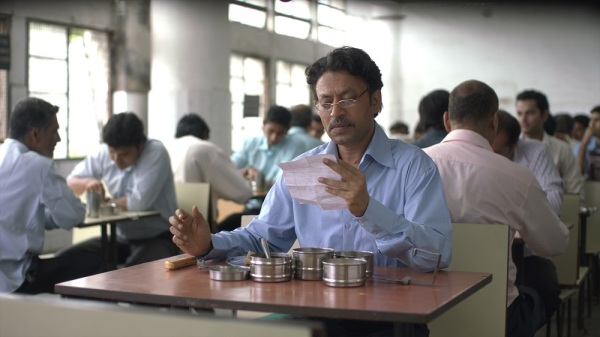 Tiffin delivery continues to be a marvel of Indian urban culture.  Five thousand carriers from one village outside Bombay daily pick up warm lunch from home kitchens throughout the city, deliver them to office workers, then collect the empties and return them home.

In The Lunchbox , a one in a million screw-up of the delivery system sends Ila’s tiffin  to a dour civil servant, a widower.  We watch him zip open the thick fabric tiffin  carrier, letting out the fresh spices and aromatics.  He can’t believe his nose.  Something magical has happened.

The narrative builds on elegant, restrained acting supported by visual details that deepen the characters and delight anyone who has dreamed of getting beneath the surface of Bombay.  Shot on location, the camera follows the tiffins  and their carriers from start to finish, squeezing into impossibly crowded trains and trolleys.  The film examines the routine of a civil service office, the dusty stacks of hand-written documents, the line of desks, the supervisor’s tiny, windowless office, the canteen where a transformation unfolds.

Best of all, we get inside cramped Bombay apartments in diverse neighborhoods.  The camera lingers lovingly on the free flow of water from Ila’s kitchen sink faucet.  It catches her sitting cross-legged on a chair at her kitchen table, as if she were still taking her meals on the floor, old style.

She smells each piece of laundry as she puts it into her washing machine.  Even appliances play a role in The Lunchbox .  She has the trappings of middle class Bombay life, but she’s lonely.

The lucky civil servant Saajan, who gets the love tiffins , lives in an apartment filled with old European furniture in Bandra, a Catholic neighborhood.  His face and name—Fernandes—suggest Goa, once a Portuguese colony.  He smokes on a small outdoor terrace, wistfully looking through an open window at a family with children happily eating dinner.

Shaik, the handsome, goofy, civil servant who Saajan is training to replace himself lives in Dongri, a Muslim neighborhood.  We eat Shaik’s famous pasandas , chopped lamb, on the floor of his tiny, carpet lined apartment.  Formerly a cook on the Arabian peninsula, Shaik deftly chops onions, garlic and carrots on his commute home, using office files as a cutting board.  He likes to get ahead on prep but of course this enrages the supervisor, appalled by the pungent files.  We join Saajan as guests at Shaik’s small Muslim wedding to his beautiful live-in girl friend, so we get to see the fabulous costumes.

And, at last I have gotten inside one of Bombay’s Irani cafes, 400-year-old institutions, where people drop in for tea and toast and special dishes.

The Lunchbox is now available on BluRay and DVD and instant video from Amazon.com via our affiliate link.

Patricia Unterman is the chef/co-owner of the Hayes Street Grill in San Francisco.  She also writes about food and restaurants and currently publishes  Unterman on Food, a newsletter.