Read Part I of “Roger and Me” here.

My Festivals with Roger

Roger and his wife Chaz were regulars at the Telluride Film Festival where I have been privileged to be part of the programming team since 1998.  At the 26th Festival’s opening brunch I was telling Roger about the previous night’s gathering for filmmakers and he quoted me in the Sun-Times, “Where else but at Telluride can you witness Peter Sellars, Werner Herzog, David Lynch and Ken Burns singing `Puff, the Magic Dragon’ with Peter Yarrow?” (“Telluride Gets High Marks,” September 5, 1999).

In 1989 a documentary came out of nowhere. After the first screening in Telluride at the Mason’s Hall, arguments about Michael Moore’s Roger & Me  went late into the night with both Michael and Roger in the middle of it….a different “Roger & Me” moment for Mr. Moore. Controversy about the movie followed the film as it obtained distribution from Warner Brothers and became a success.  I had some problems with what I felt was manipulation of certain characters for easy laughs. Roger (Ebert) was a fan but he understood why some did not like it and wrote a thought-provoking discussion. (“Attacks on ‘Roger & Me’ Completely Miss Point of Film,” February 11, 1990).

He became an important member of the Telluride family, often leading discussions with filmmakers and actors receiving Tributes.

For me one of the most memorable of these was his wide-ranging hour with Peter O’Toole that climaxed in a spontaneous dueling Yeats session with sonnets flying across the stage. You can watch the entire interview here.

We shared friendship with and a love for Chuck Jones, the great animator who also was a regular at Telluride. Chuck designed a theater there, The Chuck Jones Cinema. We agreed that amongst our favorite movies three of Chuck’s cartoons were masterpieces that we would take to a desert island: What’s Opera Doc?, Duck Amuck  and One Froggy Evening. Roger wrote brilliantly about them and after you read his essay I expect you to watch them on DVD or online. (“Chuck Jones: Three Cartoons,” January 15, 2006).

He was a regular at many other festivals—Cannes, Toronto and Sundance of course. When you encountered him he always seemed genuinely happy to see you, greeted you with his great smile and had time to stop and chat, sharing opinions of films we had seen or going off in a surprise conversation.

His “Two Weeks In Midday Sun” is possibly the best book about a film festival I have read, capturing what it is like to be at Cannes.

I remember when he told me that he entered the New Yorker’s cartoon caption contest almost every week but had never won. I thought, “You have time to see movies, write for the paper, blog and tweet daily, read, publish books, travel, spend time with your family, deal with your health problems–and enter the contest every week?  How many Roger Eberts are there?”

He finally did win the New Yorker contest and it is perfect, evoking the “F word” for what he most loved, “Film” —-or maybe the one that earns an “R” rating if used too often​.

Courtesy of The New Yorker.

The Bravest Man I Have Known

In 2002 Roger was diagnosed with thyroid cancer. He fought back and seemed to beat it. But other problems would arise. If the doctors would let him travel he was at the Festivals. He decided to go public about his health problems. We learned later that it was in response to Gene not telling anyone about his brain tumor. Roger felt people needed to confront their illnesses. A powerful and revealing interview in Esquire explains further.

Even after he lost his jaw and the ability to speak in 2006, he still would smile with a twinkle in his eyes as we came into a screening where he sat, as if waiting for our arrival. He would write a fast note, “So glad you are here” or “ Did you see the new Kore-ada film?”

And then there was the pure joy when he introduced people to Chaz, the first time and every time thereafter. What a pair!  They made every minute count and reminded us to do the same. 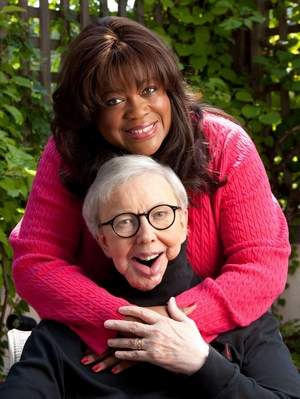 In 2011 my wife Cathy and I visited the Eberts at their multi-level Chicago home. Every space was filled with goodies a movie buff loves to look at–posters, photos, memorabilia, books, DVDs.

There was much to discuss that night. We talked about different ways of funding and finding a new permanent home for “Ebert at the Movies” on TV, ideas about getting theaters involved in promoting it and his newest yet most unexpected book The Pot and How to Use It: The Mystery and Romance of the Rice Cooker.

But most of the time that evening was spent with Roger demonstrating the computer software from a company in Scotland that would allow his own voice to speak the words he typed. The young man from CereProc explained how they had gathered hours of Roger’s DVD commentaries for Criterion, Warner Brothers and other companies. His TV and radio work had too many film soundtracks in the background and people interrupting to get a clean sound. Their computer program would select the words Roger was typing, find them in this audio database to match intonation and recording ambience for smooth sounding sentences. Roger demonstrated and suddenly we were hearing him speak to us. Amazing.

Learn and hear more at this TED talk.

He explained why he would no longer be writing regularly and laid out his plans for the things to continue–reviewing movies he really liked, working to get a show back on TV, and producing “Roger Ebert’s Overlooked Film Festival” scheduled a few weeks later.

I sent him a short note. Roger was famous for always writing back quickly (24/7 it seemed) and tweeting anything he thought his followers would like. There was no answer. Chaz later told Esquire, “On April 4, he was strong enough again for me to take him back home. My daughter and I went to pick him up. When we got there, the nurses were helping him get dressed. He was sitting on his bed, and he looked really happy to be going home. He was smiling. He was sitting almost like Buddha, and then he just put his head down. We thought he was meditating, maybe reflecting on his experiences, grateful to be going home. I don’t remember who noticed first, who checked his pulse… . In the beginning, of course, I was totally freaked out. There was some kind of code thing, and they brought machines in. I was stunned. But as we realized he was transitioning out of this world and into the next, everything, all of us, just went calm. They turned off the machines, and that room was so peaceful. I put on his music that he liked, Dave Brubeck. We just sat there on the bed together, and I whispered in his ear. I didn’t want to leave him. I sat there with him for hours, just holding his hand.”

Roger looked beautiful. He looked really beautiful. I don’t know how to describe it, but he looked peaceful, and he looked young.”

A week later “A Celebration of Roger J. Ebert “ was held at the Chicago Theatre. The huge movie palace was packed and it was streamed live. The entire three hour event is not currently available online but this ten minute (handheld) video gives some idea of the love expressed that night.

Chaz is in charge, keeping the website and other projects going in a high energy way. She comes to film festivals with a camera crew to film video blogs that complement the written words on RogerEbert.com.  Each time we see each other her eyes light up and the smile is welcoming. A hug is appropriate—and neither of us wants to let go knowing it is a three-way hug we want to truly embrace.

Some of Roger Ebert’s best DVD commentary tracks include Casablanca , Citizen Kane , Crumb , Dark City  and the very funny discussion with Russ Meyer on Beyond the Valley of the Dolls. If I was to chose just one it would be for Ozu’s Floating Weeds  (1959) as Roger explores the details of what makes a movie work. Watch the film first as it was intended and then watch it again with Ebert as your guide.

Read two critical perspectives on the film Life Itself  in the Critics Corner at EatDrinkFilms here. Roger’s many books can be found at your local bookstore or through Indiebound or Amazon.

Gary Meyer co-founded Landmark Theatres in 1975, the first national arthouse chain in the U.S. focused on creative marketing strategies to build loyal audiences for non-Hollywood fare. After selling Landmark, he consulted on projects for Sundance Cinemas and the Brooklyn Academy of Music’s Rose Cinemas, created the Dockers Classically Independent Film Festival and Tube Film Festival for the X Games, and resurrected the 1926 Balboa Theatre in San Francisco. Meyer joined the Telluride Film Festival in 1998, becoming a Festival Co-Director in 2007. Now a senior curator at Telluride, Meyer also founded the online magazine, EatDrinkFilms.com in 2014, with the EatDrinkFilms Festival to tour nationally in 2015.