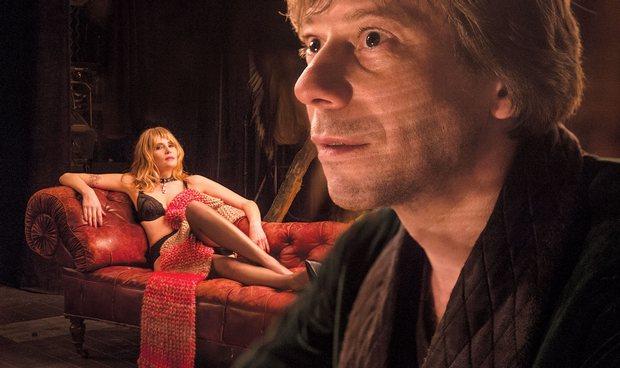 It’s every brooding artist’s dream. After countless creative struggles in a world insensitive to his genius, a beautiful young woman falls into the lap of Thomas Novachek (Mathieu Amalric) and brings his craft to life with her eccentric charm and unflagging admiration, the perfect vessel for all his unfulfilled fantasies. What could go wrong?

Considering that Polanski is directing this opening and not Zach Braff, the answer is “quite a bit.” Polanski may be adapting a stage comedy but his taste for the dark and dramatic hasn’t gone anywhere. The stormy tracking shots that open and close the film seem as if they’ll lead to some Transylvanian citadel instead of the small, dimly lit theater where Novachek bemoans the many shortcomings of the modern woman. He’s been unsuccessfully auditioning for Vanda Dunayev, the leading lady of his adaptation of Leopold von Sacher-Masoch’s lurid novel Venus in Furs . Cue gum-popping, dog-collar-wearing, but ever-so-conveniently-named Vanda Jourdain (Emmanuelle Seigner), who jabbers her way into a reading despite being hours late for her audition slot and about as far from 19th century elegance as one can get. But when Vanda takes the stage, the first of her many about-faces reveals she’s as perfect for the domineering role as her name suggests, easily luring actor manqué Thomas into a passion play of power and submission.

The transformation is predictable—even when playing the airhead, Seigner can’t help oozing femme-fatality—but the ensuing psychological struggle shows Polanski at his noire best. The more power Vanda gains over Thomas, the more the camera worships her, keeping her as the focal point of an increasingly dark and penned-in space.

Yet the shady, almost claustrophobic framing doesn’t bog down the rapid-fire pacing of what is essentially a parody. Confining itself to only 96 minutes, two actors, and a single set, Venus in Fur  is an unexpectedly light bottle episode in Polanski’s ponderous oeuvre, Thomas and Vanda’s banter is too clever and too absurd not to get some laughs, and Polanski leaves space for their tragicomic exchanges with surprising nimbleness.

As faithful as Polanski is to David Ives’ razor-sharp work, adapting a play about a play to a movie about a play saps some of its meta-theatrical punch. Moments that are so dependent on the physicality of a theater, such as Vanda’s light-board magic or Thomas’ retreat to the wings, fall flat on the big screen. What Polanksi loses in stagecraft, however, he makes up for with other forms of self-reference. Vanda’s observation that people might suspect Venus in Fur  is about Novachek and his fiancée  is particularly arch considering Seigner is Polanski’s wife and Amalric his deliberate look-a-like.  We can only guess whether our adapter harbors a fur fetish, but translating the entirety of an American play into his wife’s and doppelgänger’s mother tongue is an effort too large to be undertaken just for vanity’s sake.

The original Venus in Fur  certainly has its ambiguities (or ambivalencies, as Vanda would say) but the victor of this battle of the sexes is not one of them. Polanski’s adaptation ostensibly remains faithful to this supremacy; Seigner is a consummate puppetmaster, leaving Amalric’s Novachek reeling with her seamless shape-shifting from ditz to dominatrix to deity and manifesting period props at will like some kind of warped Mary Poppins. But despite Vanda’s bravura and screed against women as sexual objects, Polanski still ultimately frames Seigner like a glorified pin-up. Her closing ‘victory lap’ is so bizarrely fetishized it borders on being more humiliating than Thomas’ fate. Coupled with the kitschy plate-lettering of the play’s epigraph (which Vanda denounced as sexist not an hour before) as the camera pans back out, the parody devolves to farce.

Even if these were earnest attempts to empower Vanda and humble his proxy, Polanski’s decision to use his latest actress-come-wife as the mouthpiece for women as artistic creators rather than merely the muse effectively cripples his argument. Perhaps if the line between art and life had not been quite so blurred the biting social commentary of the original wouldn’t have been lost in translation. As it is, Venus in Fur  presents a clever reversal of the manic-pixie-dream-girl trope that’s certainly worth watching, but don’t expect any claws beneath the fur.

Angeline Rodriguez is an Educational Programs intern at 826 Valencia and amateur culture sponge.  When she isn’t sopping up puddles of obscure trivia or listening for Wilhelm screams, she studies linguistics at Middlebury College and dreams of being Levar Burton’s successor. 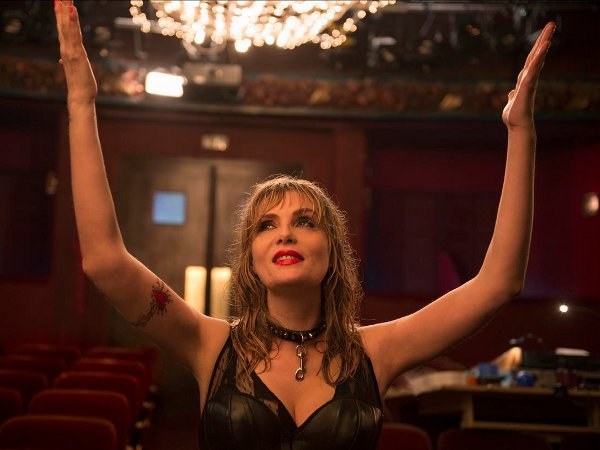 VENUS IN FUR: A Woman with Many Faces

A cheery carnival dirge and a relentlessly tracking camera lead us into a dark Parisian theater in Roman Polanski’s latest adaptation project, a film which marks a return to the director’s interests in male/female relationships, art and theater, and the basic instincts always just barely hidden under the veneer of sociability. Based on the off-Broadway play by David Ives, Venus in Fur  (2013) begins at the end of a long day of auditions; an actress, Vanda Jourdain (Emmanuelle Seigner), overhears frustrated director/playwright Thomas Novachek (Mathieu Amalric) as he vents about his unsuccessful day of auditioning vapid actresses for the role of Vanda von Dunayev, the female lead for his play adapted from the infamous 1870 book by Leopold von Sacher-Masoch. “I’d make a better Vanda!” he arrogantly proclaims. “Just put me in a dress and high heels.”

At first glance, Vanda Jourdain seems all wrong for the part to Thomas, despite having the same name as the character. She mistakes his source material for “the Lou Reed song” and describes the play as “S&M porn.” Nevertheless, she succeeds in begging, charming, and confusing Thomas into letting her audition for the part. From there, she flatters Thomas’s ego as a writer, director, actor, and above all as an interpreter of women, and he marvels at how perfect she suddenly seems for the part … and just as quickly, things turn again, as Vanda adopts the dual roles of Thomas’s critic and audience, critiquing the sexist foundations of Thomas’s work, and allowing him to consolidate his ideas for the play and its characters through her observations.

Frequently unnerving, in both funny and disturbing ways, Venus in Fur  is one of the most constantly engaging and watchable films to be released recently—despite also being one of the most talky (subtitle enthusiasts will surely enjoy the constant barrage of text on-screen … others may not). Ives’s dialogue is rich in both high and lowbrow humor and is complemented by a number of well-developed running gags throughout—examples include Vanda’s Mary Poppins-style carpetbag with a bottomless supply of props perfect for Thomas’s play, and Thomas’s cell phone ringtone, “Ride of the Valkyries,” grand interruptions of canned Wagnerian strains which are our only hints of the outside world.

For those filmgoers that prefer going to the movies over the theater for a reason, Venus in Fur  is likely to provoke similar complaints to the ones raised against Carnage  (2011), Polanski’s somewhat maligned adaptation of the play God of Carnage —like Carnage , there’s nothing particularly cinematic about this adaptation of the play. Venus  is spartan visually, with minimalist cinematography and limited shot variation, and all of the action taking place in a single, confined setting: a theater and its stage. As in Carnage , Polanski insists upon emphasizing the sense of claustrophobia he sees within the play and turning it into an organizing principle for his adaptation—a directorial choice that might be exciting in theory, but actually feels punishingly dull in its execution. However, what the film lacks in visual experimentation is made up for in the oral / aural pleasures that the play has to offer, namely, rapid-fire and razor-sharp dialogue, delivered exquisitely here by both Seigner and Amalric. David Ives’s off-Broadway play has been blessed by a history of gifted interpreters on-stage, but, for this viewer, Polanski’s film version will be the model that I measure all future Vandas by, and it’s difficult to imagine a more magical and fascinating Vanda or Venus than Emmanuelle Seigner.

Seigner effortlessly plays a woman with many faces, as varied and eerie as the representations of Venus, and switches rapidly between different centuries, fantasy and reality, domination and submission—even including an impression of Marlene Dietrich. It’s a dazzling act that Vanda plays of putting on different costumes, and of adjusting her role little by little, until she can persuade Thomas of what it takes to “make a better Vanda.” Like all chamber theater pieces, Venus in Fur  rises and falls by the strength of its writing and performances, and on these counts, for both fans of theater and film, Polanski’s latest should not be missed.

In a former life, Tien-Tien Jong worked as the Director of the Dartmouth Film Society and as a coordinator for the shorts division of the Telluride Film Festival. She loves animation, silent film, and film noir, and has a soft spot for ballet and opera in British, French and American films from the 1940s-’60s. Her favorite theaters are the beautiful Paramount in Oakland and the Castro in San Francisco.