“The only audience I worry about is my collaborators on the film; everything, and everyone else, is outside the circle.  Cinema audiences interest me no more than the tide of humanity that passes each day under my window in Charing Cross Road—I wish them well.”

That quote from Derek Jarman’s 1984 Dancing Ledge —the first of his several published memoirs—goes a long way toward explaining how a man whose work in (particularly) the 1980s seemed to loom so large might be so little-remembered today, certainly in the U.S. if not his native Britain.

Never mind that Jarman, a man of no few contradictions, did indeed often care more than he liked to admit about the accoutrements of public success.  He was disappointed, sometimes angered, by the savage reviews, limited distribution and unwon awards his films seemed to attract. But then he was a self-classified “controversialist” with a rarefied sensibility and little use for mainstream entertainment.

(He reserved particular scorn for those exportable exercises in Hail Britannia period nostalgia which defined U.K. culture for many at the time, like the Oscar®-winning Chariots of Fire and TV miniseries Brideshead Revisisted .)  As an openly gay man making boldly homoerotic and politically charged work throughout the Thatcher era, he was a lightning rod for conservative outrage—just as many artists were similarly targeted by homophobic forces “across the pond,” during our own overlapping Reagan era.

But the U.S. never really had anyone like Derek Jarman—you’d have to composite at least a half-dozen American artists in various disciplines to get even close.  The feature films are his most conspicuous legacy, and they’re what will be showcased throughout this summer at the Pacific Film Archive’s welcome retrospective “Derek Jarman, Visionary.”  The 10 full-length efforts playing July 5-August 28, from scandalous 1976 Sebastiane  to 1993’s self-made epitaph Blue , weave all his primarily interests into a distinctive personal gesamtkunstwerk.

Still, Jarman probably would have bridled at being called “just” a filmmaker, no matter how many creative hats he wore on any given production.  He was also an extraordinarily prolific and well-regarded painter; a constant writer of screenplays (many tantalizingly unproduced), poetry, and endlessly readable journals; maker of innumerable small, abstract 8mm and video projects even at the height of his feature career; a somewhat reluctant pioneer in the field of music videos, aligned with acts from Psychic TV to The Smiths and Pet Shop Boys; a set designer for opera, ballet and theatre; a fanatical gardener who sometimes thought he’d have been happiest devoting his artistic energies wholly to horticulture.

Though disinclined to align himself with organized movements, he nonetheless also became one of Britain’s fiercest proponents of gay rights—and when he discovered he was HIV-positive in the early 1980s, his decision to go public with that knowledge instantly made him the nation’s most famous AIDS spokesperson.  Given the mix of terror, blame, ignorance and secrecy with which that disease was then approached by most, it was a burdensome role to assume.  Yet there was never any question of retreat.  More than one observer has noted that the epidemic which finally claimed his life also lent his art a drive and focus it might never have found otherwise—it provided the additional passion of a heroic crusade.

This very complicated man was born in 1942 Middlesex, his father a British Air Force officer with whom he’d have a lifetime of variably contentious disagreements.  He was likewise ill-suited to the regimentation of English boarding school life, such that for some time he was actually considered below normal intelligence.  It took a couple unconventional profs to detect and encourage the enormous creative energy that lurked beneath his social awkwardness and the nervous physical tics they sometimes produced.  As his focus increasingly turned toward art-making, even those less impressed invariably noted the sheer prolific vigor of his painting, which attracted not only prestigious student prizes but a first solo exhibition at age 18.

This was in 1960.  Imagine entering adulthood as a native of soon-to-be “Swinging” London at that decade’s start, already gifted with talent and a taste for adventure, artistic and otherwise.  Jarman then considered himself something of a classicist, suspicious of emerging “pop” art and other perceived fads.  He also had the then-standard difficult time overcoming shame and fear in acknowledging his homosexuality.  But he was living at ground zero in an era of experimentation—resistance was futile and, in his case, rapidly abandoned.

By the dawn of the 1970s he was well entrenched in the city’s avant-garde landscape of communal living, free love, Gay Lib, and multi-media “happenings.”  Pondering whether painting and sculpture were already outdated forms, he began branching out into experimental cinema in 1971.  His myriad little-seen short works prepared few, however, for the long-aborning feature Sebastiane —even amidst such firestarters as Oshima’s Empire of the Senses  and Pasolini’s Salo , its Locarno Festival premiere caused a furor. 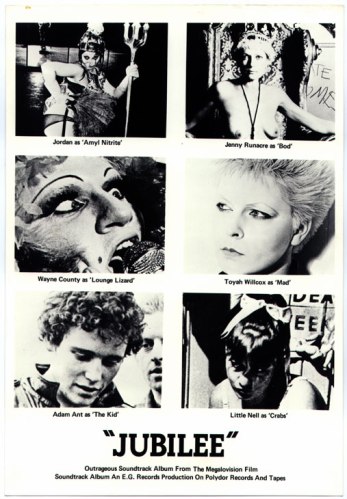 Jarman’s enthusiastic embrace of the emerging punk scene fueled his second feature Jubilee  (1978).  It finds Elizabeth I getting a phantasmagorical view of a collapsed future England where anarchistic gangs fight a fascist police state.  Its personnel including Rocky Horror Picture Show  veterans as well as Toyah Willcox, The Slits and a very young Adam Ant, this nihilistic carnival was the first of several Jarman cinematic broadsides against a U.K. that (particularly after Tory Prime Minister Margaret Thatcher’s election the next year) seemed willing to sacrifice all history, liberty and humanity in relentless pursuit of market capitalism.

That theme was further explored in such largely improvisational features as The Angelic Conversation  (1985), The Last of England  (1988) and The Garden  (1990)—experimental collages of imaginative sights and sounds with a loose (at best) relationship toward narrative structure.  They were derided in some quarters as Jarman’s glorified “home movies,” though keep in mind that this was an era when (in the U.S. as well) political conservatives reserved special ire for any public art with subversive (let alone “queer”) form or content.  They’re beautiful, poignant, mannered, “difficult” movies, perhaps his purest and most personal artistic expressions.

Though equally abstract, they reflected one lesson he learned from over-garrulous Jubilee : The spoken word was kept to a minimum, even as Jarman’s soundtracks developed an ever-greater complexity.  That rule of thumb held sway over even his most scripted features, those that invariably won (in relative terms) larger audiences for their comparative conventionality.  The Tempest  (1979) pared Shakespeare to the bone, yet still struck some as one of the best-filmed Bard adaptations ever.  Ditto Marlowe’s Edward II , an Elizabethan gay tragedy turned natural allegory for institutionalized modern homophobia.  Jarman’s wide-ranging interests made him equally at home turning Benjamin Britten’s War Requiem  (1989) into a mournful screen music-drama as he was creating a playful meditation-cum-biopic about the philosopher Wittgenstein  (1993).

For many years his dream project was a film about Renaissance painter Caravaggio.  By the time he actually made it in 1986, he’d gone through so many drastic script revisions—hoping to attract one source of funding or another—that some judged the final results a bit stale.  Still, it was his first and probably greatest popular breakthrough (again, relatively speaking), characteristic in its mixing of period detail with very modern anachronisms and political commentary.  The film also introduced him to acting muse Tilda Swinton, who along with domestic partner Keith Collins, would prove his most cherished faithful ally in later years. 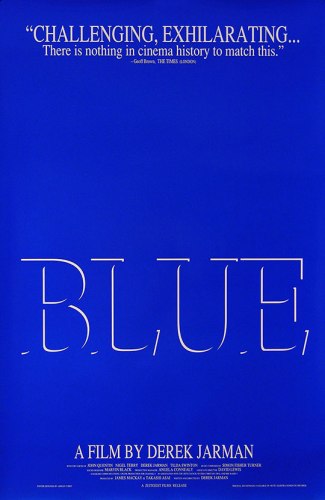 The visual sumptuousness its subject demanded made Caravaggio  in a way the polar opposite to Jarman’s final film, completed just before his death.  Blue  began as an ode to the hue most identified with French artist Yves Klein’s monochrome canvases.  But as Jarman’s AIDS-related health woes (including encroaching blindness) loomed ever larger, it became the filmmaker’s final tabula rasa: 79 minutes of solid color field, while the soundtrack weaves together music, text and reminiscence in an approximation of a dying man’s free-floating headspace.  His anger spent, it’s a gentle, luminous leave-taking.  By then, even Jarman’s detractors had had to admit that he’d handled being a famous Person With AIDS with extraordinary grace, candor and bravery.  His life and art had become inseparable; the critics who’d dismissed either or both as “camp,” let alone “degenerate,” had been made to look pitifully small in spirit by comparison.

Dennis Harvey has been publishing film reviews since the era of the typewriter.  He’s a member of the San Francisco Film Critics Circle and currently writes for Variety, the San Francisco Bay Guardian, and Fandor.