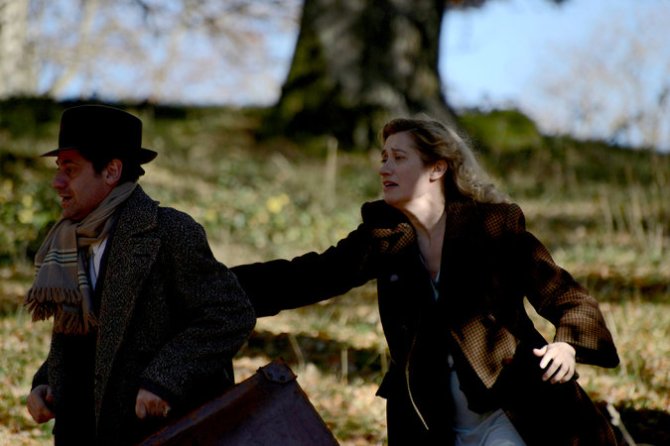 It’s a matter of comment when a male director takes a woman for the subject of his film.  When he makes two separate films about unpretty, solitary, difficult women with thwarted artistic talents, it’s a mark of real uniqueness.  In Martin (Seraphine ) Provost’s Violette  (2013), Emmanuelle Devos gives a pungent, immersive performance as author Violette Leduc (La Batard, Therese and Isabelle); an anti-intellectual, autobiographical writer whose pugnacity and capacity for drink makes one wonder why more Beat-era fans haven’t taken to her?  She has a lot in common with your precious Bukowski.  As Leduc wrote in Mad in Pursuit: “My ideal?  The honesty of a cobbler.  My style?  The gasping of an asthma victim.”  Leduc described her sex life with a fine mix of succulence and succinctness.  Thus she ran up against the censors of the early 1960s, who were outraged a woman was talking about these matters.

In seven chapters, Emmanuelle Devos embodies this lumpy, frustrated figure, with her draught-horse gait, her oversized nose and her mangy rabbit fur coat.  We meet her as a black marketer smuggling food during war time rationing.  Violette leaves the countryside for the iron and stone of Paris in the ’50s.  Provost recreates the city as it was before automobiles devoured it, when it still had the aspects of a medieval fortress.  Hugues Tabar-Nouval’s buzzing, chittering strings make this snowy city even more estranging.  Leduc is a prisoner in her tiny one-room apartment, with the bed bumping against her kitchen table.  Sometimes she shares the space with her gorgonish mother Berthe (Catherine Hiegel): “The war is over and you still live like a thief,” Berthe says.

After writing the story of her life as a reject, Violette develops a hopeless passion for Simone de Beauvoir (played by Sandrine Kiberlain, the lovelorn teacher who fell for the married contractor in Mademoiselle Chambon ).  De Beauvoir coolly admires Leduc’s prose, and becomes her editor and patron.  The encouragement is returned: Violette’s next work is a book-length love letter to De Beauvoir.  Faced with such bottomless neediness, de Beauvoir shows her Vulcan side.  It’s left for us to note de Beauvoir, champion of equality, is unwilling to acknowledge the imbalance in power between her and Leduc.

We don’t see the other existentialist all-stars; Camus and Sartre are mentioned, but they’re off-stage.  As Jean Genet, to whom Leduc was inevitably likened, Jacques Bonnaffé is perfect; at first glance at his thin smile, your hand curls protectively over your wallet.  Through Genet, Leduc at last meets a patron with big money—a comical perfume tycoon (Olivier Gourmet) who also prefers to keep his distance.

Devos keeps this yearning sad woman from becoming a pain in the neck.  With great sureness, Provost notes the poor, H-G. Clouzot side of France pre-1960: the snobbery, the cold, the slop pails and the third-class meat.  True, Violette  has been shaped slightly to please a crowd—when Leduc’s La Batard  is an unqualified success, she gets the usual rewards of an author in a biopic, and is happily mobbed by autograph seekers.  When Leduc finds her refuge in the village of Faucon, Violette throws the shutters open so we can get the glorious view from over her shoulder—the old Room With a View  shot.

Violette  is one of the best films of 2014, and yet the real author is still a bit tougher than the biography.  The fine documentary Violette Leduc: In Pursuit of Love  by Esther Hoffenberg expands upon Leduc’s importance as a writer, and her bad habit of falling in love with men who were gay or women who weren’t.  The heavy tenebrous clouds over Leduc’s little tower of solitude in rural France are more foreboding than the view we see of Violette.  And the author was a lot rougher-looking than Emmanuelle Devos, especially in elderliness, when she looked like actor Jack Gilford wigged and dressed as Doris Day.  All agree Leduc was a striking woman whom you’d notice anywhere.  Describing her conflicted feelings for Berthe, Leduc wrote “Love has innumerable names.”  So does beauty.

Richard von Busack is a staff writer at San Jose’s Metro Newspapers.  He’s the author of The Art of Megamind and has written for Entertainment Weekly, n +1 and cinematical.com.  He’s a member of the San Francisco Film Critics Circle. 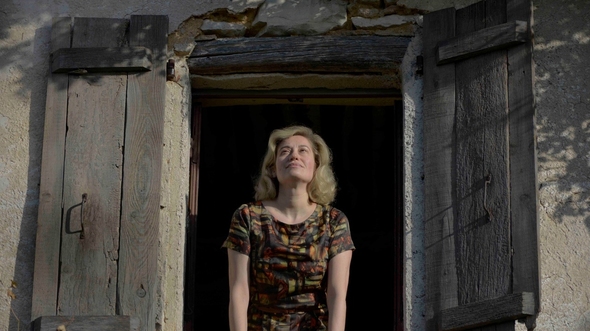 A favorite genre among filmmakers, biopics generally come in two types or varieties: The all-in-one, birth-to-death biopic that tries to take in the subject’s entire life, leaving the value of his or her contributions to the world stage in art, politics, or similarly significant endeavor to the viewer or moviegoer to determine; or the slice-of-life approach, focusing on a distinct, personality-forming and/or world-changing period in the subject’s life, highlighting both the subject’s contributions and the obstacles the subject had to overcome to make those contributions.  The second approach tends to be the more illuminating, enlightening one.  Writer-director Martin Provost (Séraphine ) wisely chose the second approach when he decided to make French feminist writer Violette Leduc, a contemporary of Simone de Beauvoir, Jean-Paul Satre, Jean Genet, and Albert Camus, but lesser known stateside and among English-speaking audiences, the subject of his thoroughly engrossing, provocative biopic, Violette .

When we first meet Violette (Emmanuelle Devos), the subject of Martin Provost’s biopic, she’s in mid-flight, attempting to avoid German soldiers.  It’s both literal and metaphorical as Leduc spends most of Violette ‘s running time in flight mode, running away from and toward her past, incapable of breaking free of the traumatic childhood and adult experiences that have—for better or for worse (more the latter than the former)—turned into the deeply insecure, profoundly unhappy woman we encounter in the opening scenes.  The German soldiers capture Violette, imprisoning her briefly for participating in the black market, but—after three days—she finds her way back to her faux-husband / lover, Maurice Sachs (Olivier Py).  Bitterness, resentment, and recriminations follow in the first of several arguments between Violette and Maurice.  A writer, Maurice relies on Violette both for whatever she can obtain via the black market and as cover for his homosexuality. Violette, however, wants more.  She wants a romantic relationship with Maurice who, of course, can’t give her what she wants.

The opening scenes essentially function as a microcosm of a recurring pattern in Violette’s perpetually heartbroken life: She falls in love with unattainable men or women, pouring all of her hopes, dreams, and desires into one ill-fated relationship after another.  Stigmatized by her social status as both a woman and the product of an unsanctioned relationship (legally making her a bastard, the title of her breakthrough 1964 memoir), Violette finds an uncomfortable refuge in writing.  For all of his failings as a partner and companion, Maurice recognizes Violette’s literary talent and encourages her to write.  Soon after the termination of that relationship, Violette finds herself in Paris (literally and figuratively) where a chance discovery of one of Simone de Beauvoir’s (Sandrine Kiberlain) books reignites her interest in writing and the possibility of becoming a published writer.  Obsessive-compulsive by nature, Violette practically stalks Simone, first as a star struck fan and later as Simone’s informal pupil.  Like Maurice before her, Simone encourages and nurtures Violette to write, to develop her voice.

Simone’s enthusiastic support leads to the publication of Violette’s first book, but it proves insufficient to make Violette a literary star or even a self-sustaining writer for the better part of two decades.  Even as Simone continues her mentorship and support, obscurity continues to haunt Violette.  With personal and professional rejection regular presences in her life, Violette’s already fragile mental state deteriorates, a downward slide that Provost doesn’t hesitate to illustrate in painful detail.  As egotistical and solipsistic as Violette may be in Provost’s view, he never shies away from showing her both at her most vulnerable and her most frustrating (as when her insecurities lead to self-sabotage).

In Emmanuelle Devos, Provost found the perfect actress to capture Leduc’s volatility, instability, and unpredictability.  Devos isn’t afraid to take Violette into potentially unsympathetic, audience-alienating territory.  There’s a constant, almost predatory hunger in Devos’ performance too.  Her Violette is starved for affection, for acceptance, and recognition.  As Leduc’s mentor and the object of Violette’s unrequited romantic affections, Simone de Beauvoir, Sandrine Kiberlain is just as well cast.  Prim, proper, and detached, her de Beauvoir is both fiercely intelligent and independent; a keen analyst of French society, especially as it applies to the repressive, marginalizing treatment of women (her most famous book was called The Second Sex  for a reason), and just as keen an analyst of the people around her.  She recognizes Violette’s talent and temperament almost immediately, knowing what to say and how to say it to assuage Violette’s insecurities and push her on to the path of literary greatness.

One thought on “Critics Corner: VIOLETTE”