Frameline proudly celebrates its 38th annual International LGBT Film Festival showcasing the very best of Queer Cinema beginning this Thursday, June 19th and running through Sunday, June 29th, in what remains not only a Bay Area institution and premiere international treasure trove of LBGT films and film events, but the world’s largest LGBT film exhibition on the planet.

The global mission of Frameline—”to change the world through the power of queer cinema”—is becoming more evident with each passing year, as exemplified by this festival’s increased number of quality, content-rich and technically polished films—an astonishing 214 in number—featuring an incredibly diverse array of comedies, documentaries, dramas, music and sports feature films and shorts from more than 30 countries.

While “gay” movies still have their niche, films chronicling the LGBT experience are no longer ghettoized as they were back in the day.  As their focus moves more toward the universal human condition, their emphasis on characters in search of love and acceptance negotiating the tricky realities of relationships (in a banner political year for the constitutional rights of all LGBT U.S. citizens), “queer” films are becoming more relatable to an increasingly larger film audience, but at the same time are remaining truer-than-ever to their LGBT identity.  This year’s crop of films is ample evidence that LGBT films stand alone and remarkably hold their own amongst some of the best films being made today.

The Case Against 8  (dirs. Ben Cotner, Ryan White, 2013, U.S.)—In what is arguably Frameline’s best opening night film in years (and one of the best documentary films you will see all year), this is a scrupulously detailed, rigorous but stellar account of the five-year legal battle to overturn California’s Proposition 8 in the fight for same-sex marriage equality.

Arguing the case before the Supreme Court are the most unlikely of protagonists—conservative lawyer Ted Olson and liberal lawyer David Boise—the same two lawyers who argued on opposite political sides in the year 2000 in the case where the Supreme Court decided the Bush vs. Gore presidential election.  This time, both sides are arguing in favor of same-sex marriage—and together made legal history. 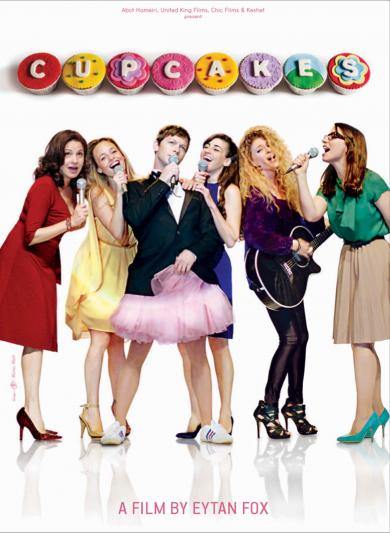 Drunktown’s Finest  (dir. Sydney Freeland, 2014, USA)—Early in Drunktown’s Finest, a wise, medicine-man proclaims: “What we look for, and what we get, aren’t always the same thing.”  This truth is borne out in the lives of three young Native Americans—a father-to-be; a daughter of white adoptive parents searching for her blood parents; and a two-spirit trans-woman, trying to escape from their New Mexico Navajo reservation.  A completely one-of-a-kind movie experience, and a refreshingly unique view of an oft-overlooked culture, this is also a beautiful coming-of-age tale that is genuine, poignant and touching.  (And who can go wrong with a title like this?)

Eat With Me  (dir. David Au, 2013, USA)—Middle-aged Asian Emma leaves her bland marriage and winds up crashing in her gay son’s apartment.  Mother and son attempt to reconcile their estranged relationship and rediscover their zest for life in a food-centered dramedy where food becomes a metaphor for relating, forgiveness and healing.  Nicole Sullivan is a standout as the wacky neighbor who takes Emma on a hilarious odyssey of alcohol, ecstasy and opening-up to life.  And this year’s Frameline Award honoree George Takei (see below) makes a surprise and memorable appearance playing himself. 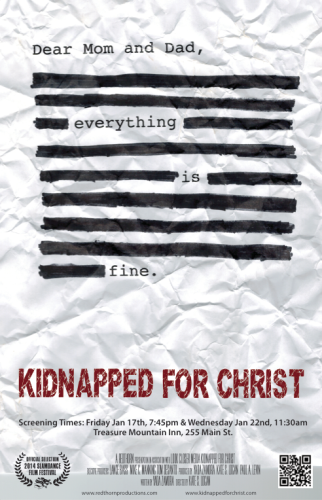 Kidnapped For Christ  (dir. Kate Logan, 2014, USA)—In this chilling, modern day horror story American teens with troubled pasts (including one straight-A student who is gay) are hauled off to Escuela Caribe, an American-run Christian behavior-modification school in the Dominican Republic.  There they are subjected to “cultural shock therapy” designed to make them more compliant with the school’s Christian reform program.  Extreme exercise, exhausting physical labor, strict obedience to minute regulations, isolation, compulsory repetitions of religious texts, physical beatings and even worse punishments (for minor infractions) are all part of the program.

As an impartial evangelical Christian herself, documentary filmmaker Kate Logan was granted unprecedented access to the school.  She thought she was documenting a benign alternative-therapy program and was shocked to discover what was really going on—just  as the school began to curtail her access.  Logan worked for more than five years to see her film completed amid lawsuits and threats from the school and parents.  The result is a riveting exposé (produced by Lance Bass) that throws light on the vast, previously unknown, worldwide abuse and exploitation of teens by an unregulated multi-billion dollar industry.

Folsom Forever  (dir. Mike Skiff, 2014, USA)—A fascinating look at the history of the Folsom Street Fair, the gay and lesbian leather scene and the diversity of the gay community, this illuminating documentary is particularly accessible and user-friendly to those who are not drawn to the leather scene.  This may be the first time the Folsom story has really been told.

From its beginnings as a small neighborhood event in 1984 (as a response to the AIDS crisis and the closing of many gay establishments) to the Fair’s current 30th anniversary in 2014 (which draws an international crowd of more than 400,000 people), Folsom Forever  features eloquent and informative interviews with the event’s founders and contributors as well as professors and educators who have studied the evolution of the leather scene.

Rare historical footage of early and current fairs is included highlighting the preparation and organizing of the event and some of the challenges that have been faced over the years.  Sure to be surprising to some are the leather community’s educational contributions to safe sex during the height of the AIDS era, the impact this has had internationally, and the fact that the Fair itself is a non-profit which does considerable charitable work.

Campaign of Hate: Russia and Gay Propaganda  (dir. Michael Lucas, 2014, Russia)—This eye-popping documentary couldn’t possibly be any more timely with the passage, prior to the start of the 2013 Olympics, of legislation which makes it a crime to publicly discuss homosexuality in any kind of positive light or approving context in Russia.  The result has been widespread beatings of gay people—and worse—by mobs of citizens: actions which are encouraged by both the police and the government (who continue to look the other way).

Documentary filmmaker Michael Lucas spotlights interviews with gay couples, gay parents, and gay youths living in Russia who face jail time, physical harm, and having their children forcibly taken from them if they come out of the closet.  Also interviewed are Russian religious figures, educational authorities, gay activists (bravely and courageously trying to change the situation) and average citizens kept clueless by the government’s assertion that homosexuality is a disease imported through the influence of Western culture.

Particularly powerful are the interviews with a number of Russian citizens—heterosexuals fighting for gay rights—concerned that their country has become a dictatorship and using a minority as a scapegoat.  Their level of eloquence, logic, and insight provides a glimmer of hope and a breath of fresh air in a dire situation in this raw, powerful, shocking and riveting documentary.

Futuro Beach  (dir. Karim Ainouz, 2013, Brazil)—In the beautiful but dangerous waters of Futuro Beach, a Brazilian lifeguard saves the life of one of two drowning German tourists.  An intense sexual bond between lifeguard and survivor ensues and the lifeguard, against his inclinations, relocates to Berlin with the German—a decision which brings consequences and a ghost from the lifeguard’s past.  Exquisitely photographed in the manner of Antonioni, the always interesting, haunting and poetic themes linger in the memory.

Back On Board  (dir. Cheryl Furjanic, 2014, USA)—The inspiring story of Greg Louganis, the greatest diver of all time, told from his beginnings as a 16-year-old phenomenon to his gold medal Olympic diving wins in1984 and 1988, through the discrimination he faced as a gay athlete (where expected and common financial endorsements were denied him).  As an early AIDS survivor, Louganis’ focus and courage as a closeted young athlete take on heroic proportions in this landmark documentary.

The Way He Looks  (dir. Daniel Ribeiro, 2014, Brazil)—Best friends Leo (who is blind and regularly bullied) and Giovana’s relationship is tested when a new, mysterious student enters their lives, for whom they both develop strong, but undeclared feelings.  Exceptionally emotional and honest performances by three excellent young actors inform this remarkably fresh and charming take on young love in one of the most touching and tender films about teenage friendship and adolescence you will ever see anywhere.

And if you need any more convincing to check out Frameline 38, actor and activist George Takei (Star Trek) is this year’s recipient of the 2014 Frameline Award for “his wide-ranging and pioneering contributions to the representation of LGBTQ figures in media.”  He will appear in-person with his husband Brad, in tandem with this year’s Centerpiece Documentary To Be Takei  (dir. Jennifer Kroot, 2014, USA): a joyous illustration of Takei’s dynamic life as actor, activist and humanitarian.

And if that’s not enough, this year’s line-up of international selections is surely the best in years and features one of the boldest and most original Closing Night programming choices in Frameline history, the coming-of-age dramatic comedy from Germany I Feel Like Disco  (dir. Axel Ranisch, 2013, Germany).  Added to this are panel discussions (“New Storytelling in Gay Cinema”) and the usual array of provocative short films—all taking place in historic movie venues like the Roxie, Victoria, Rialto Cinemas Elmwood in Berkeley and, of course, San Francisco’s very own (and palatial) Castro Theatre, which just happens to boast the best movie audience in the world.

Tim Sika is the host, producer of Celluloid Dreams: The Movie Show; director of the Camera Cinema Club; DVD reviewer for The Ronn Owens Show (KGO NewsTalk 810 AM San Francisco); and President of the San Francisco Film Critics Circle.