The task of mapping the Philippine archipelago must have been daunting for early explorers.  Composed of more than seven thousand islands, separated not only by bodies of water but also by language, culture, and religion, the Philippines cannot be captured by any single definition and description.  However, despite the blatant diversity, the country has succeeded to be united by several elements, the most prominent but least acknowledged of which is probably the love for movies.

The task of mapping Philippine cinema is perhaps an even loftier goal.  Several years after the advent of digital cinema in the country, which eventually paved the way for many filmmakers to break free from the monopoly of the bigger movie studios, the films being produced in the archipelago have become as diverse in terms of style, format, theme, and motivation.  Twenty years ago, an observer would not be labeled inaccurate if he described the state of Philippine cinema as one riddled by mediocrity, subservient to the demands of capitalist forces.  Given the diverse output by the country’s filmmakers whether they are working within the studio system or independently, the same observation can no longer hold water.  Philippine cinema, like the nation it supposedly represents, eludes any single definition and description. 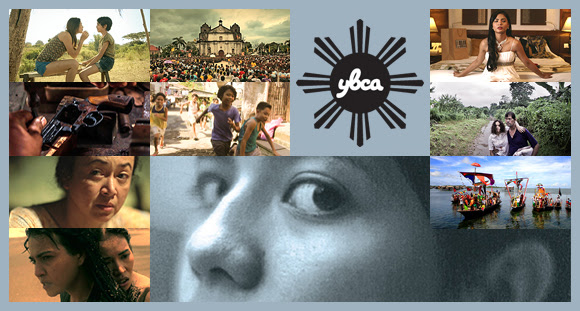 Perhaps the best way of getting a glimpse of this very malleable facet of Philippine cinema is to immerse oneself in the Yerba Buena Center for the Arts’s now-yearly showcase of Filipino films aptly entitled New Filipino Cinema.  On its third year, the showcase, lovingly curated by Joel Shepard, who seems to have left his heart in Manila, and Philbert Ortiz Dy, perhaps the Philippines’ most widely read critic, puts the diversity of the country’s cinema up front and center.

Erik Matti’s Rigodon  (2012), a purely commercialist work that takes advantage of the country’s fascination with tales of marital infidelity, is seen together with Sherad Anthony Sanchez’s Jungle Love  (2012), a sweaty and forest-bound meditation on the country’s many repressions and hypocrisies.  Linked together only by the explicitness of the sex they so readily depict, the films seem to have been made by artists coming from different generations and galaxies.

Which film-producing festival gave birth to which film is worth noting because of the fact that the politics, interests, and overall history of these festivals seem to have a bearing on the aesthetics and quality of the films.  The four films coming from Cinemalaya are story-driven works, perhaps owing to the fact that the festival relies heavily on the quality of the submitted screenplays in selecting the films it will produce.

Sana Dati , a delightfully awkward romance that begins during the morning of a wedding, is the last film in Tarog’s Camera Trilogy.  It seems to owe its existence as a panacea to all the unrealistically hopeful romantic comedies that mainstream producers have been churning out regularly.  Ekstra , starring venerated actress Vilma Santos, examines how the evils of capitalism have infiltrated television by following a few days in the life of a bit player for a soap opera.  Transit , which is set almost entirely in Israel, provides a touching observation of the Filipino diaspora.  Debosyon  has Yapan commenting on the marriage of the Catholic and pre-colonization faiths through a tale of an orchid vendor who falls in love with a forest spirit.

On the other hand, Cinema One Originals, although still reliant on the submitted screenplays by aspiring filmmakers, is more particular on the visions of its filmmakers.  Oftentimes, the films’ narratives have equal footing with format and thematic experimentations.  There is an indubitable interest on genres, and how such rules can be broken to serve the purpose of the filmmaker’s intentions.

Woman of the Ruins  is set amidst a Philippines that has been demolished by natural calamity.  Religion becomes salvation.  Human weakness becomes the downfall.  Part-fable, part-science fiction, part-allegory, Sicat’s film nevertheless reflects a unique and hauntingly apt depiction of a community on the brink of hopelessness.  Iskalawags , which stars children who were unable to view their own film because their island was swallowed by floods caused by Haiyan, is a loving tribute to the act of reminiscence.  It does not edify innocence.  It only relishes in its loss.  Absolutely lovely in the way it ties its story of provincial kids growing up with our common love for cinema, Deligero’s film is probably one of the most underrated films from last year.  Pascalina , on the other hand, uses the myth of the popular aswang in delivering a very feminist take on everyday life.  Entirely shot using digital Harinezumi, it looks and feels like a work set in a different dimension, where everything is a tad more off-tangent than in the real world.

The program opens and closes with works by the country’s most internationally acclaimed directors.  Raya Martin’s How to Disappear Completely  (2013) has oppression as its heart.  Centering on a girl oppressed by her parents, who are themselves oppressed by their own boring lives, the film understands that the most important element of any horror film is its ability to give its audience an approximation of being as oppressed as its characters, of being under the mercy of the conceit of the director.  This is exactly what Martin does.  Brillante Mendoza’s Thy Womb  (2012), which has national treasure Nora Aunor portray a Badjao midwife who ironically can never become a mother, follows its director;s fetish with real lives and situations that echo a societal malaise.  In this case, Mendoza’s story presses on both the strength of women and her sad place in what seems to be an overly-patriarchal society. 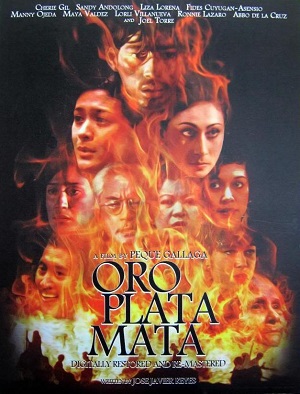 Also featured in the program is the digitally restored version of Peque Gallaga’s Oro, Plata, Mata  (1982), a lush epic which is believed to be the precursor to regional cinema considering that the film’s director, most of its actors, and its propensity to examine social classes is very particular to the province of Negros and its vast sugar-producing haciendas.  No End in Sight  (2012), Cierlito Tabay’s stark documentary on gun-making in Cebu City, is the distant descendant of Gallaga’s film.  While the documentary clearly tackles universal issues, it points directly at a problem that affects Tabay’s city.

While it is nearly impossible to make sense of the beautiful chaos that defines what Philippine cinema is right now, it is however always gratifying to attempt to map it.  Whatever shape, form or figure that comes out of viewing and connecting all the diverse films from this year’s program will surely be something that would elicit great intrigue and interest.  There are no right or wrong impressions of what defines the country’s cinema, just the abundant pleasures of being on a journey and not knowing your destination. 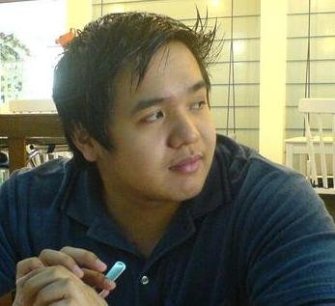 Francis Joseph “Oggs” Cruz discovered his passion for cinema during college in Ateneo de Manila University.  He is now working as a corporate and litigation lawyer in Manila.  Never losing his passion for cinema, he also manages his cinema blog called Lessons from the School of Inattention, contributes for Philippine Star and Philippine Free Press, and is the Philippine correspondent for Twitch.  He has contributed for film books on the Philippine New Wave and Kidlat Tahimik.  He attended the 2011 edition of the Berlinale Talent Campus as part of the Talent Press.  His expanded reviews of the following films from 2014 New Filipino Cinema can be found at his cinema blog.