The theatrical release of a new documentary by Lisa Hurwitz, The Automat, has taken me back in time with its wonderful clips from classic movies and discussions of food favorites of our youth from Baked Macaroni and Cheese, Chicken Pot Pie to Custard Cups and Pumpkin Pie. It is essential viewing for those interested in the history of restaurants in the 20th Century, the combining of technology and home-cooked meals and a trip down memory lane even if you were born too late to actually visit one. But we also cover contemporary attempts at automated food. We have included many photos, film clips, recipes, music, and related links to supplement your enjoyment of The Automat now playing in theaters and at film festivals—only on the big screen.

(Richard Brody’s review in The New Yorker is also excellent.)

I was 14 when That Touch of Mink came to theaters in 1962.  I went to see practically every movie at our Uptown Theater and a comedy starring Cary Grant and Doris Day with Audrey Meadows and Gig Young sounded promising. It was fun but there was one thing that I had never seen before and it stayed with me. Sure we had vending machines where you could get candy, sodas, snacks, and little toy prizes in plastic bubbles. But a wall of windows where you could buy an entire meal for a few nickels?

That seemed like heaven and I told my parents that if we went to New York I wanted to eat there. (And a few years later we made it to one of the last New York locations and it was everything I hoped for.  There was good reason people loved the Baked Macaroni and Cheese, Chicken Pot Pie and those pies.)

Shortly after that I saw an episode of The Jetsons animated comedy with its own version of an Automat of the future.

The Foodarackacycle is a food serving machine. At the touch of a button it makes and dispenses any meal a person wants. It has a separate keyboard for programming meals. See which episodes it appeared in. There also was Dial-a-Meal, a gadget found in the Jetson household. It produces food in a pill form as well as coffee still in a liquid form.

“I have always thought that the Automat in New York has the best scrambled eggs in the world.” —Gregory Peck

The following recipes for classic Automat staples come from the 2002 book, “The Automat: The History, Recipes, and Allure of Horn & Hardart’s Masterpiece,” by Lorraine Diehl and Marianne Hardart. Reprinted by permission of the authors and the Hardart family.

Cook the macaroni according to package directions. Drain.

Preheat the oven to 400 degrees

There seemed to be a pattern in movies of couples who eat at the Automat because one of them is poor and wants to show her well-off amour that the food is good, like The Catered Affair and Just This Once.

“The Automat was the Maxim’s of the disenfranchised.” —Neil Simon

Beef and Noodles with Burgundy Sauce

“The original recipe called for Burgundy wine, which is rather expensive now – and was most likely not used at the time,” Marianne Hardart notes. “Any hardy red wine will do.”

Coincidentally there is an excellent podcast and several fascinating resources offered by the NYPL.

An especially good picture of what it was like in an Automat appears in the little known silent comedy, The Early Bird( 1924) with Johnny Hines. We see how people got the most out of their nickels (misspelled in the title cards) and how rich and poor shared tables. 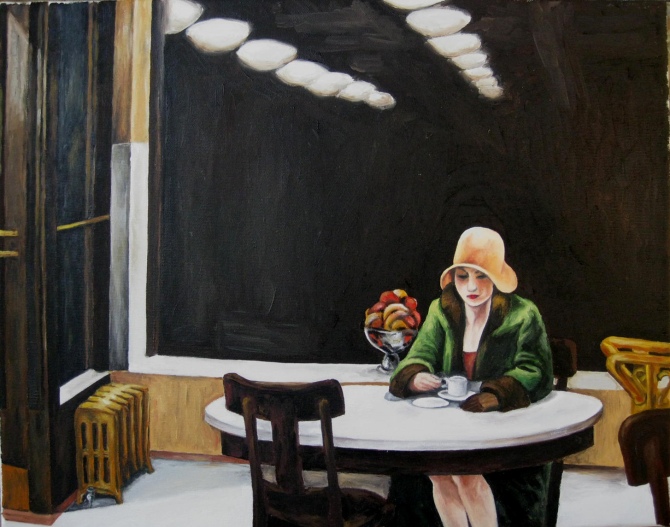 Painted in 1927 as an oil on canvas by Edwin Hooper, Automat is a haunting depiction of what art critics call “urban alienation.” Here, Hopper’s anonymous woman sits in isolation. Read all about it courtesy of the Des Moines Art Museum and watch this video.

The Automat is a perfect set-up for Candid Camera.

The opening scene from the Vitaphone short Artistic Temper (1932,) has out-of-work actors getting a cheap meal.

“I had the same lunch there every day: three vegetables, a roll, and cocoa. All for twenty-five cents.” —Jerome Robbins

A district supervisor for H&H in the 1950s says they used the similar tasting Hubbard Squash.

The Beatles had an Automat…in their home. Starts about 1 minute in this clip.

Horn & Hardart is Back with Coffee

The Automat SF is a new 2022 bakery and restaurant tipping it chef’s hat to the freshly made fast food of the past automats with a contemporary twist. Great food but no windows to deposit coins into as meals are made to order.

“I lived at the Automat. They had the greatest chocolate milk. When I moved to Philadelphia, I apportioned less than two dollars a day to eat on, and the Automat was the only place I could do it.” —Dick Clark

Animated cartoons offered an opportunity for fantasy and fun at the Automat.

The Merry Café with Krazy Kat

A funny Automat gag in the Bugs Bunny cartoon A HARE GROWS IN MANHATTAN (1947). It’s at 5:20 here: https://www.dailymotion.com/video/x5yzyyv 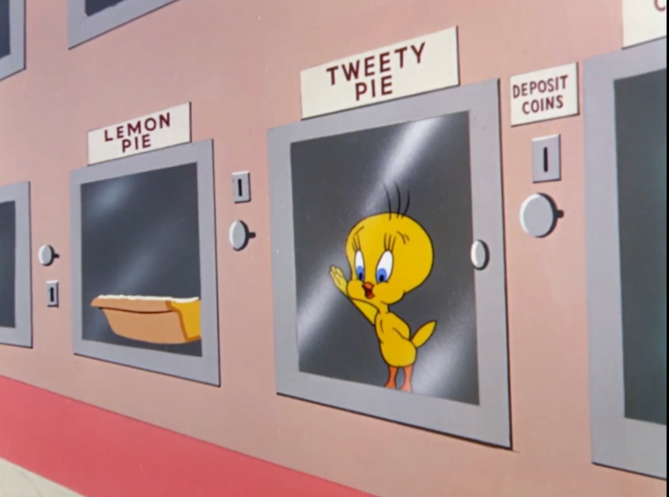 Thanks to Jerry Beck of Cartoon Research and Paul Etcheverry for these tips.

“Counter Culture: A History of Automats, Luncheonettes and Diners” from the New York history podcast, The Bowery Boys.

“Ahead of Their Time” documentary discusses how Horn and Hardart’s innovations influence current trends.

There have been many attempts to create updated versions of the Automat with a variety of vending machines and robot food preparation machines.

Spyce is a robotic startup bought by Sweet Greens with mixed results but keeps trying.

A Burrito Box vending machine played a music video (a la Scopitone? ) while heating your meal.

Automatic Hamburger Machine- 50 Years Ahead of its Time

Jumping forward into the dystopian future of DARK CITY (1998).

50 Vending Machines in Japan—what can’t you get?

Financial comparisons through the years of The Automat. 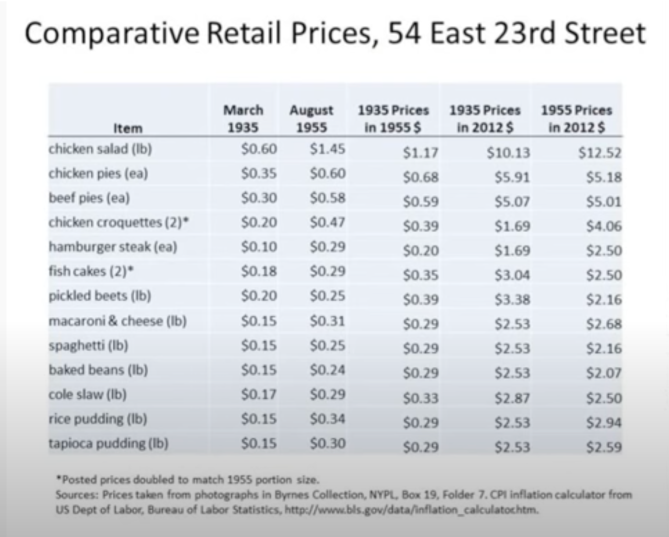 A home movie filmed at the last Automat that closed in 1991.

“Let’s Have Another Cup of Coffee” is a song by Irving Berlin appearing in the musical comedy Face the Music, which opened in 1932. The song, set in a self-service restaurant modeled on the Horn & Hardart Automat, is sung in the play by a group of once-wealthy citizens who were awaiting better times, as mirrored in the song’s opening lyrics:

The hit version was released in 1932 by Fred Waring and his Pennsylvanians with vocals by Chick Bullock with the Three Waring Girls.

There is a terrific scene with Eddie Bracken and Cass Daley from The Ladies Man (1947). The entire film is available here and the Automat sequence starts at :20 minutes. Spike Jones and his City Slickers seem Automat appropriate and they are featured elsewhere (at :33 minutes and their hilarious classic Cocktails for Two is at 1:21).

There are many movies with Automat scenes from the silent era to the early science fiction musical, Just Imagine(1930) (with an outdoor version of an Automat)to Midnight Cowboy.

Silent film musician and restoration hero Ben Model worked with the Library of Congress to restore a series of short comedies call the “The Mishaps of Musty Suffer.” Outs and Ins (1916) is described on IMDB: “Musty works in an automat where the customers steal food using slugs and reaching through the vending doors.  Musty smashes them over the head with a mallet, and dumps the bodies down a chute to what appears to be a sausage processor.” 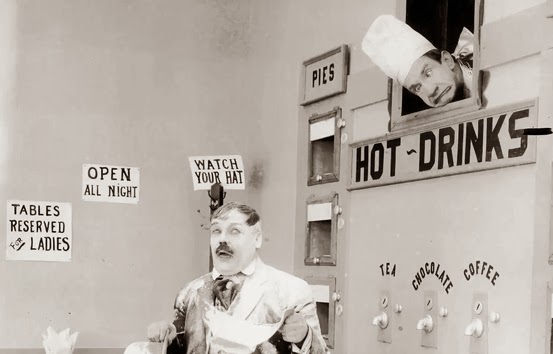 The entire ten-minute film can be seen as part of Model’s weekly Sunday “Silent Comedy Watch Party”(starting at 29:00) or for best quality purchased as part of a Musty Suffer collection on DVD.

Ironic that a 1941 film, Footlight Fever, has a scene in an Automat and a synopsis that is surprising similar to Mel Brooks’ The Producers. It is a sequel to Curtain Call also with familiar storyline. 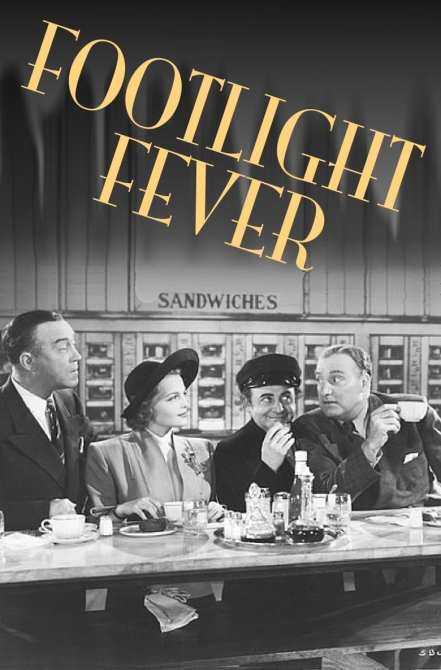 Thanks to the Cladrite Radio YouTube channel for several clips used; there are more to view. For more research try this Another Old Movie Blog and a  list from IMDB.

Having nothing to do with the automat other than a great musical joke is Peter Schickele presenting the P.D.Q. Bach’s “Concerto for Horn & Hardart, S.27” in the best tradition of Spike Jones with classical music.

Too bad there isn’t video but we have found a few snapshots of Schickele at one of his favorite dining spots, a Horn & Hardart Automat…. 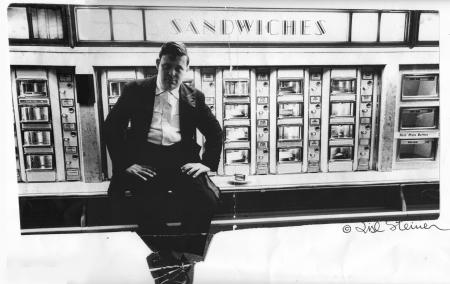 …possibly because it so reminded him of playing the Hardart, an instrument used by P.D.Q. Bach in his “Concerto for Horn and Hardart.” We know what kinds of instruments horns are but you may enjoy this detailed “scholarly” description of the Hardart. 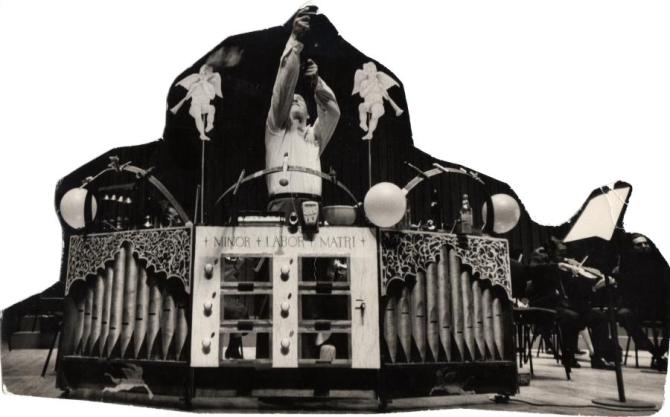 The Concerto for Horn and Hardart is a work of Peter Schickele composing under the pseudonym P. D. Q. Bach. The work is a parody of the classical double concerto but where one instrument, the hardart, uses different devices, such as plucked strings, blown whistles and popped balloons, to produce each note in its range. The name “hardart” and the name of the concerto is a play on the name of proprietors Horn & Hardart, who pioneered the North American use of the automat. Like the automat, the hardart had small windows in the front where the musician had to insert coins to remove implements needed to strike or otherwise play the devices that produced the notes. The composer Philip Glass, a classmate of Schickele’s, helped build the actual instrument; Glass and the others tasked with building the hardart made it a transposing instrument without telling Schickele. Although a parody, the work is a well-written example of a classical concerto and could stand as a serious piece of music with a few changes.Template:Fact

The piece is in three movements:

The first Movement (music)|movement is in sonata form, though with numerous mishaps. It quotes Wolfgang Amadeus Mozart’s Symphony No. 29 (Mozart)|Symphony No. 29. The second is a set of variations which, as Schickele notes, have no relationship to the initial theme. It quotes Piano Concerto No. 21 (Mozart). It concludes with a cadenza that shows off the abilities of the hardart. The third movement, a minuet (“with cream and sugar”), ends with the bursting of the balloons on the hardart.

The inscription Minor Labor Matris on the hardart is Latin for “Less Work for Mother”, the advertising slogan adopted by Horn & Hardart in 1924.

(Excerpted from the Wikipedia article where you will find more details and reference links.)