Long before “festing” was a trend, Sonoma International Film Festival’s Executive Director, Kevin McNeely, and his team began holding lively soirees in a tent pitched on Sonoma Plaza.  High-level passholders, filmmakers and celebrities made a beeline to this little hub to mingle and enjoy the crème of Sonoma Valley’s wine, spirits and food.  The concept evolved and the tent became the legendary “backlot.”  With its roaring theme parties, live music, dancing, food and wine, SIFF sealed its reputation as the high-end/good time festival.

This year, SIFF celebrates its 25th anniversary March 23-28, and film programming that challenges its wonderful parties.  It all unfolds within the radius of Sonoma’s historic town square or “SONOMAWOOD.”

EDF couldn’t wait to interview Kevin McNeely about what’s happening at this very special edition of SIFF and how the festival has evolved.

How did you get involved with Sonoma International Film Festival?

Kevin McNeely:  Rosemary and I moved from Manhattan to Sonoma Valley in 1992.  A few years after that, I met Carolyn Stone who was getting this film festival going and asked if I was interested.  In the beginning, 1997, it was “Sonoma Valley Film Festival” and it was an excuse for a group of us to get together and have a big fun party on Saturday nights and show a lot of mediocre films.  No one had any contacts.  We kept working at it and everything has gotten better.  This year, we have 120 films including 79 premieres, five of which are world premieres. They come from indie filmmakers, major distributors and we explore many other sources to find the exciting new works.  Filmmakers are coming from over 35 countries. We put them up for the entire festival in homes and guesthouses offered by the community.  SIFF is unique because it’s a completely walkable festival: all eight venues are situated around Sonoma Plaza.  Our community loves that they are able to transport themselves around the world and experience different languages, cultures, and stories through these films.

What special events and guests are in store for your 25th celebration?

Kevin McNeely:  We opened on Wednesday night with “The Lost City,” an action-comedy starring Sandra Bullock, Brad Pitt, Channing Tatum, and Daniel Radcliffe.  Directors Aaron Nee and Adam Nee were in attendance.  Afterwards, we partied in the tent.  It was a perfect escapist Opening Night before we get to the serious stuff.  On Thursday evening, we had our big culinary event, SIFF | Devour! Chefs & Shorts Culinary Event Honoring Chef Jacques Pépin.  We’re thrilled!

Chef Pépin is 91 years young and doing extremely well.  He hand-painted the front of the menu.  This original artwork was auctioned during the dinner to benefit his Jacques Pépin Foundation and attendees will keep their copy as a lovely souvenir of the evening.  SIFF is making a $10,000 donation to his foundation and awarding him with our first SIFF | Devour! Culinary Excellence Award.

On Friday, we have a new event, Chef Joanne Weir’s Plates & Places Lunch.  Weir’s a huge personality with her PBS show, “Plates & Places.”  She’s creating a three-course meal that will be served with wonderful wines and will show various segments of her show from Greece, Spain and Morocco that inspired those dishes.

Jacqueline Bisset in a scene from ‘”Loren & Rose.” Photo:Russell Brown

Also on Friday night, we honored Jacqueline Bisset with our Cinematic Excellence Award and screened her new film, “Lauren & Rose”.  She and director Russell Brown participated in a Q&A and she was present with an engraved Tiffany ice bowl.

Friday’s party was “SIFF Funk It Up” with the dance-fusion collective Afrolicious.

On Saturday night, Jennifer Siebel Newsom is returning for the world premiere of  “Fair Play,”  an important documentary about gender equality at home that was filmed during the pandemic.  Later Saturday night, we have our Awards Ceremony and big party with music from the Brazilian band SambaDa.  Sunday night, we close with “The Butcher’s Daughter”( “Tendre et Saignant”), directed by Christopher Thompson.

What’s the story behind your Backlot tent?

Kevin McNeely:  Ahhh…our tent…it must go up and go on.  We used to have a smaller tent right behind City Hall in the Sonoma Plaza.  Our passholders loved partying there but we never got a lot of compliments or support on that because we were taking up city workers’ parking spaces and they were not in the spirit of it.  Backlot was an idea, a great one, that came to fruition amongst us.  I can’t single-handedly take credit for it.  It took off in 2016 when we moved it to the overflow parking lot of the Sonoma Veteran’s Hall, or “backlot.”  Finally, we had a hub that was large enough to have our big-ass Saturday night party, a lounge for our high-end passholders, and a coffee shop.  We added parties on Friday and Wednesday nights and it’s now 12,000 square feet.

Esan Wong makes sure everything is perfect.

The name just changed to Cogir Hospitality Tent after our new sponsor, Cogir of Sonoma Senior Living Community.  Their executive chef, Chef Ensan Wong, will prepare the appetizers for the festival and for “Chefs & Shorts.”  Before joining Cogir, he worked for Thomas Keller over at the French Laundry and at Porsche.  We’re excited about this partnership; this is going to be high end.

What makes the “Chefs & Shorts” dinner so special?

Kevin McNeely:  “Chefs & Shorts” is the creation of Chef Michael Howell and Lia Rinaldo of Devour! Food Film Fest, which I’ve attended in Nova Scotia. It’s a traveling arm of this festival and is put on all over the world—from Berlin to Vero Beach, Florida.  They invite these hotshot celebrity chefs to attend who each create a dish inspired by a short film.  This year, we have: Ken Frank (La Toque), Michael Howell (Devour!), Roland Passot (Left Bank, La Folie), Seadon Shouse (Timber Cove Resort), Ari Weiswasser (Glen Ellen Star) and Ensan Wong (Cogir).  It’s one thing to have one of these chefs cook for you at their restaurant; it’s another to experience their dishes paired with premium wines, short films, and wonderful conversation.  Honoring Jacques Pépin makes it all the more special.

Since food and wine are so central to SIFF, what films in this genre stood out for you?

Kevin McNeely: “The Kitchenistas,” David Romero’s documentary about a Latina-led nutrition movement that brought healthy practices to an unhealthy San Diego community.  Chef Duskie Estes will speak about her nonprofit, Farm To Pantry, that provides gleaned foods to underserved populations.  She’s bringing her bacon caramel popcorn for attendees and will have her food truck here Friday. 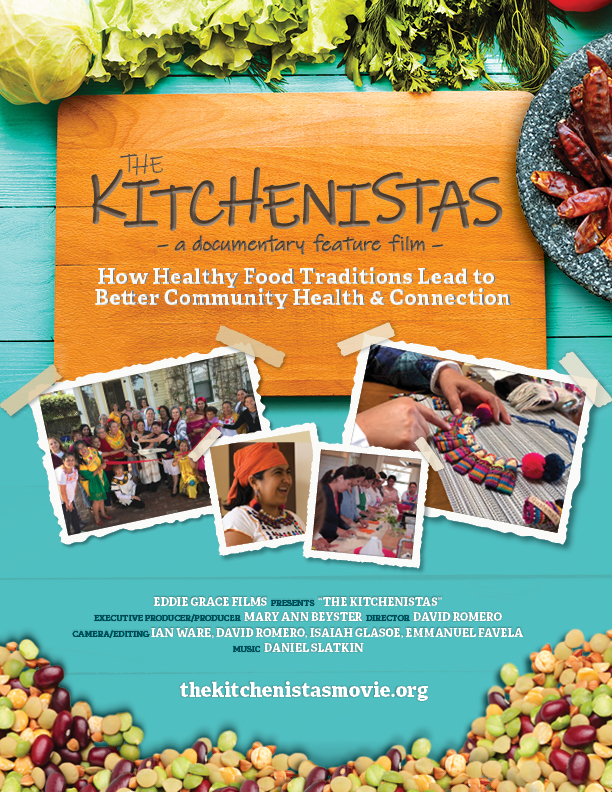 “Criollo”: This is a Uruguayan doc from Pablo Banchero, with the famous chef, Hugo Soca, who explores Uruguay’s amazing cuisine and traditions beyond its famous grilled meat.

“Peace by Chocolate,” a feature by Jonathan Keijser, tells the true story of a family of refugees who fled the Syrian Civil War to Canada and established a chocolate company.

“Lemon and Poppy Seed Cake,” a feature by Benito Zambrano.  We look for stories and here’s a beautiful one, set on the island of Majorca, about two sisters who inherit a bakery and reinvent themselves. 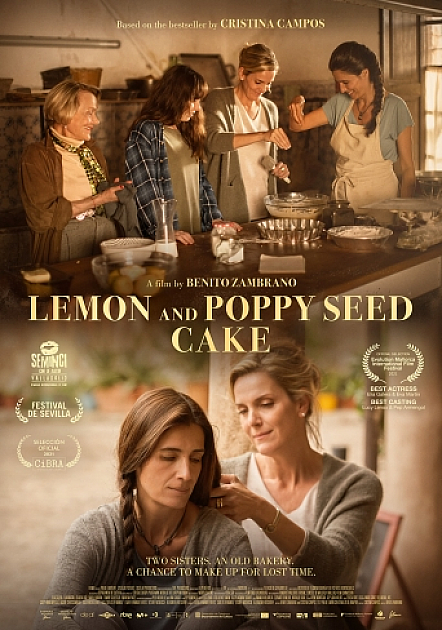 Our Culinary Shorts Program has five fabulous shorts including a sneak peek at the upcoming feature “MFK Fisher:The Art of Eating.”

Can you share an endearing memory related to the festival’s past honorees.

Kevin McNeely:  In 2007, at the historic Sebastiani Theatre, we’d come to that moment, partway through, when the bulb burned through the film and it fizzled. The film came to a complete stop and whole theater went “arhhh.”  Even before they could get the house lights on, this lone character in the third or fourth row stands up, turns around and points to the projection booth and says “Even the projectionist in Sonoma is on wine.”  And with that, he did twenty minutes of shtick until everything was fixed and good to go.  That was Robin Williams.

Speaking of Robin Williams, how did the festival’s love affair with UFO’s get going?

Kevin McNeely:  Our UFO Symposium is in its tenth year and has evolved into a standing room only keeper thanks to our resident UFOologist, Jim Ledwith, who has brought us all sorts of experts to talk about the UFO phenomenon and crop circles.  It began years ago when Jim gave me “Crop Circles: Crossovers from Another Dimension.” By Terje Toftenes. I was fascinated.  On Friday at 9 a.m. at the Sebastiani, we’ll screen James Fox’s “The Phenomenon” (2020), a mainstream documentary, narrated by Peter Coyote, which interviews astrophysicists and other experts. So, this is how we live up to being a quirky, fun festival…we give a platform to the indie filmmaker as well as our UFOologist and alien influences.

SIFF has continually supported Sonoma Valley High School’s Media Arts Program.  Can you tell us about the program and how much SIFF has contributed over the years?

Kevin McNeely:  I’ll start with our community’s Peter Hansen, director of Sonoma Valley High School’s Media Arts Program.  What started off with passion, a couple of inferior cameras and some broadcasting equipment in 2002, has grown into a top digital art program and facility equal to many university media programs.  To date, we’ve given $725,000 to them for state-of-the-art equipment, afterschool programs and scholarships. These students graduate into top film schools and move on to impressive careers in the field.  Their annual Sonoma Valley High School Media Arts Program Showcase was a free show on Wednesday at the Sebastiani  with students  presenting 5 minute shorts of all genres.

Karen Allen was our returning guest speaker and was be interviewed by Bella Quilici, a promising student in Mr. Hansen’s program.  One group of alums started their own production company and their documentary, “Sonomawood,” has its world premiere on Friday, 3pm at the Sonoma Valley Woman’s Club.  That’s full circle for all of us; that’s our joy.

What are you most proud of?

Kevin McNeely:  Building this festival and developing a strong reputation that goes beyond Northern California.  When our program director, Steve Shor, goes to Cannes, everyone has something very complimentary to say about our festival.  Every year, we have more and more premieres, more events, and we keep improving our parties.

Geneva Anderson is a free-lance writer based in rural Penngrove, CA who writes on art, film, food, identity, and cultural heritage.  She is the editor of ARThound, an online arts publication.  She grew up on a small farm in Petaluma, CA, with animals and gardens.  A graduate of UC Berkeley, Princeton, and Columbia School of Journalism, she covered the transition of Eastern Europe from state socialism and reported for seven years from Central and Eastern Europe, the Balkans and Turkey.  She has also worked on assignment in Asia, Cuba, Mexico, South America.  She has written or done photography for Art, Arte, ARTnews, The Art Newspaper, Balkan, Balkan News, Budapest Sun, EatDrinkFilms, Flash Art, Neue Bildende Kunst, Sculpture, EIU, Euromoney, Global Finance, The International Economy, The Press Democrat, The Argus Courier, Vanity Fair, and others.  She is passionate about Rhodesian Ridgebacks and currently has two, Parker and Ruby Rose.

“The Butcher’s Daughter”( “Tendre et Saignant”) trailer is in French without English subtitles but the screenings will have subtitles.