A-Sham celebrates the food of the Levant (Israel, Jordan, Syria, and Lebanon) in a three-day event where Arab and Jewish chefs cook their traditional foods together, sharing family recipes and culture.

BREAKING BREAD, a new documentary by Beth Elise Hawk focuses on the annual A- Sham Arabic Food Festival in Haifa, a city with a healthy cultural life enjoyed by both Arabs and Jews.

The festival was created by Dr. Nof Atamna-Ismaeel who was the winner of the popular Israeli television cooking contest, Master Chef. She claims allegiance to Israeli, Palestinian and Arab culinary traditions. She does not believe that politics should enter the kitchen. It should be a place of harmony and collegiality. The festival is supposed to build bridges between Arab and Jewish chefs. She believes that Jews and Arabs have similar palates, so their cooking should inherently be harmonious.

Chefs Shlomi Meir , and Ali Khattib share a nostalgia for their ancestors’ legacy.

Chefs come together from all over Israel to participate.  Some are cooking old family recipes that have never been published. Many are self-taught. The key word to describe the spirit of the festival is respect. Respect for tradition, respect for family, respect for each other as they work together. And of course, respect for the local and seasonal cooking ingredients. While cooking together will not bring world peace, by sharing food and bringing diverse people together in the kitchen, change occurs in the way they view each other. One chef says our beauty is in our variety.

Because Israel is a young nation made up largely of immigrants, many food influences make up the cuisine. Lots of Arabic dishes, recipes from North Africa, and Ashkenazi recipes from Central Europe.

One aspect of the festival is the Hummus Project where chefs build on the base of hummus and add other ingredients to the dish, could be vegetables, could be lamb stew, could be spicy Tunisian fish. Atamna-Ismaeel says that “borders mean nothing to hummus.”

One traditional dish that was new to many of the chefs was Kishik, a mixture of bulgur and yogurt that is rolled into balls and dried in the sun, and later reconstituted in soup. Another is the dessert Konafeh, melted cheese topped with filo shreds, baked and topped with syrup.  Qatayif, half-moon shaped pastries might be filled with cheese, nuts, potatoes, or meat and are reminiscent of Kreplach, Varnickis, and Shish Barak. 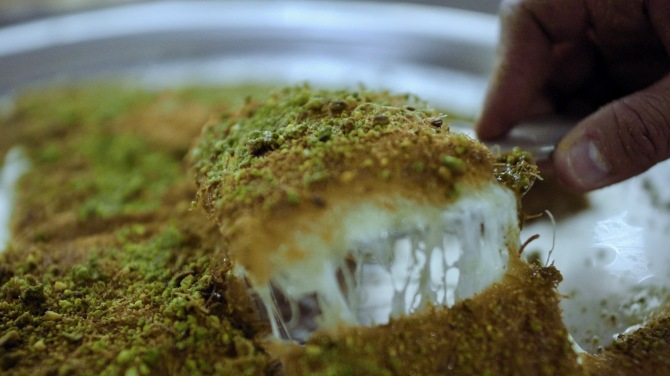 The festival is an opportunity for chefs to revive old recipes, learn different techniques and broaden their culinary knowledge. As one chef says “by cooking together we can progress and move on but we must not forget who we are and where we came from.”

BREAKING BREAD follows several pairings of chefs and they learn more about each other through their mutual passion for cooking and eating local foods.

It is playing exclusively in cinemas starting in February, 2022.

A gallery of Hummus featured in BREAKING BREAD. 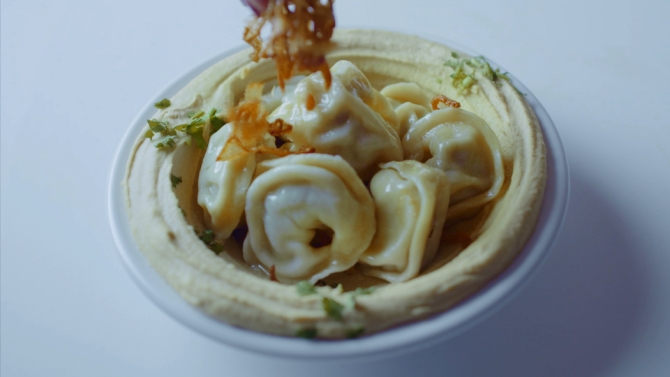 Hummus Topped With Bangers And Cabbage

See below for filmmaker interviews, more photos and recipe videos.

Joyce Goldstein is a prolific cookbook author, cooking teacher and lecturer. As a consultant to the restaurant industry she improves existing recipes, adds new ones to complement the menu and works with culinary staff to refine flavors and execution.

For twelve years she was Chef/Owner of the ground-breaking Mediterranean restaurant, SQUARE ONE. Her menu presented the foods of Italy, Spain, France, Greece, Turkey, the Middle East, and North Africa. SQUARE ONE won numerous prestigious industry awards for food, wine, and service. Prior to SQUARE ONE, Joyce was chef of the Cafe at Chez Panisse for 3 years. She also served as Visiting Executive Chef of the Wine Spectator Restaurant at the Culinary Institute of America at Greystone in the Napa Valley.

Joyce was voted San Francisco Magazine‘s Chef of the Year in 1992 and received the James Beard Award for Best Chef in California for 1993, and the lifetime achievement award from Women Chefs and Restaurateurs, of which she is a Founding Board Member.

She is a prolific cookbook author. Many of her 28 books have won industry awards. Her latest book is ‘Jam Session: A Fruit-Preserving Handbook(A Cookbook)”

Try several recipes from her book The New Mediterranean Jewish Table published on EatDrinkFilms with interviews and videos of Joyce in action in the kitchen.

The Wisdom of Joyce Goldstein

Read more from Joyce on EatDrinkFilms. 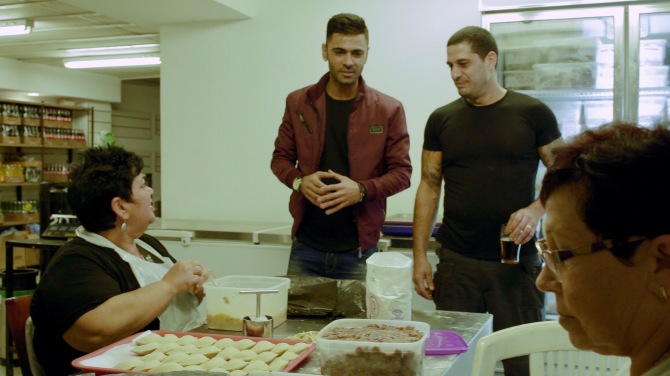 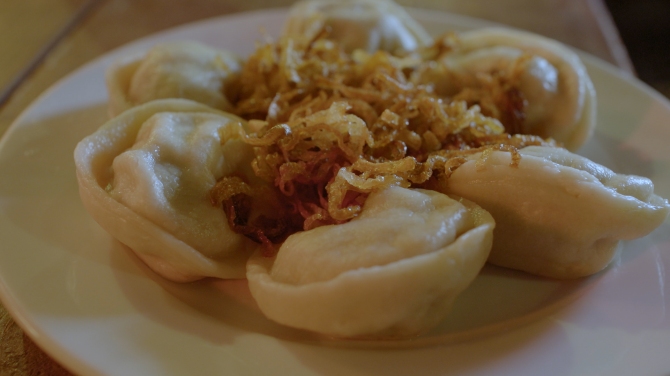 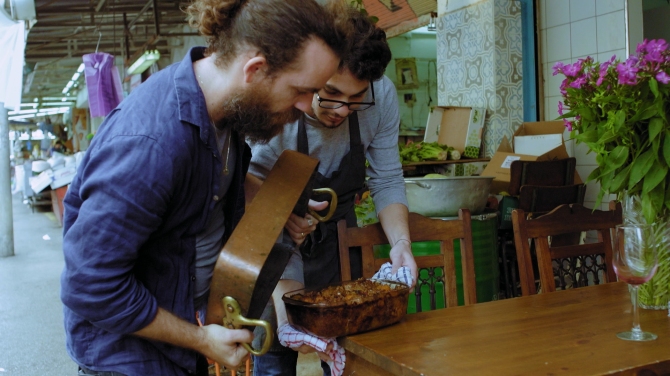 Classic Arab Chicken Masachan- A molecular biologist and the winner of Israel’s MasterChef cooking show, Nof Atamna-Ismaeel shows Chef Einav Gefen a classic Arab chicken dish at her home in Baka al-Garbiya in the Haifa district of Israel. Chicken Masachan involves poaching chicken in olive oil with aromatic Persian limes. The chicken is then shredded and served on top of flatbread. 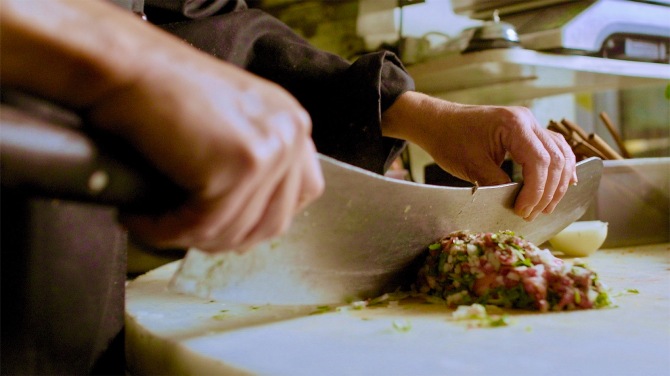 Maamoul Date Cookies are a traditional Arab dessert. The cookies are made from semolina, flour, sugar, butter, nutmeg, cinnamon, and stuffed with dates.

Hummus is a Levantine dip or spread made from cooked, mashed chickpeas or other beans, blended with tahini, olive oil, lemon juice, salt and garlic. It is popular throughout the Middle East and in Middle Eastern cuisine around the globe.

Tabouli Salad– Tabbouleh is a Levantine vegetarian dish made of tomatoes, finely chopped parsley, mint, bulgur, and onion, and seasoned with olive oil, lemon juice, and salt. Some variations add garlic or lettuce, or use couscous instead of bulgur. 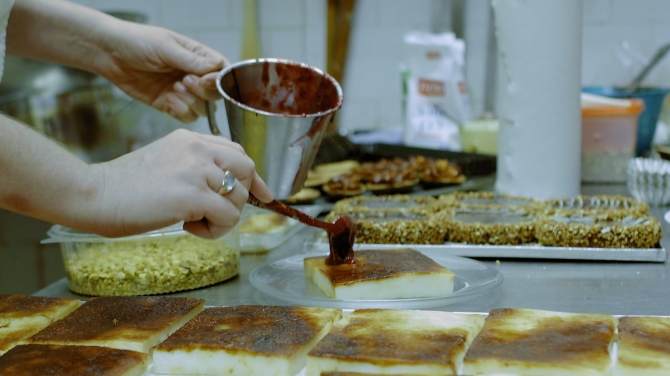 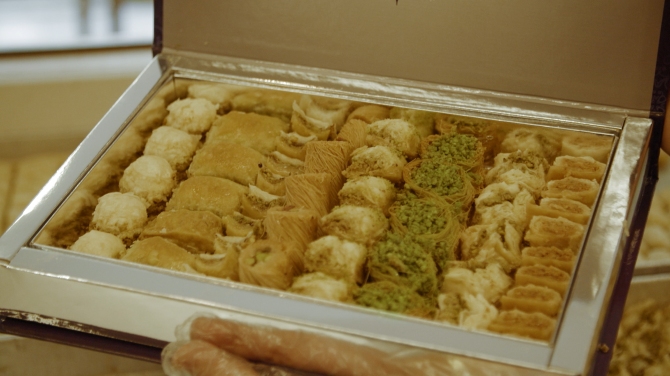 Box Of Baklava And Assorted Pastries

Strawberry daiquiri hummus? Snickerdoodle Cookie hummus? Shannon Sarna tried these American hummus flavors so you don’t have to. A fun read from The Nosher for a few laughs of disbelief. 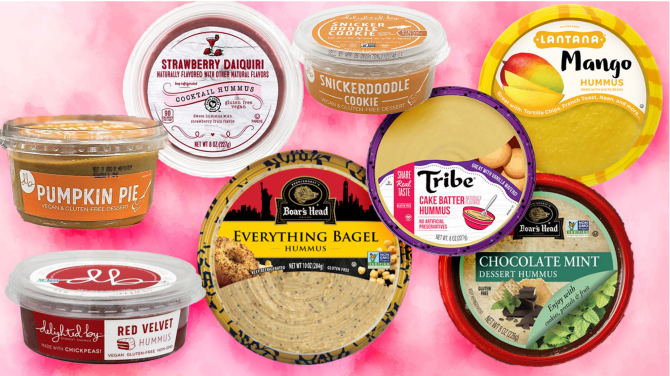 And the most horrifying ways people are using hummus.