A candid conversation with the film programmers at the Berkeley Art Museum Pacific Film Archive (BAMPFA).

The schedule of movies that shows at the Berkeley Art Museum Pacific Film Archive is considered by many fim lovers to be one of the best curated anywhere, essentially a year around film festival. There is a mix of great U.S. and international classics, Premieres of new discoveries, restorations, experimental works and documentaries.  There are selected series that run in tandem with exhibits in the galleries along with most of the schedule, creatively curated by the in-house team of Susan Oxtoby, Kathy Geritz and Kathryn MacKay. (See their bios below). Film lovers know that works are projected to meet the highest standards in the state-of-the-art Barbro Osher Theater.

EatDrinkFilms‘ editor Gary Meyer sat down to discuss how they fell in love with movies, their process of selecting films to show, how the virtual cinema world is working for them and what they see in the future.

Visit the BAMPFA website for current and upcoming shows. You can also search past films including series, guest curators and special events.

Your Day Is My Night by Lynne Sachs

“Exit West: Immigration on Film” continues through November 20, 2020. It is a selection of films addressing immigrant and refugee experiences inspired by Mohsin Hamid’s 2017 book Exit West. There are recorded conversations relating to all the films in this series.

“Picture a STEMist” -Marking 150 years since women were first admitted to Cal, BAMPFA is delighted to partner with the Women in Tech Initiative at the University of California to present a series of recent documentaries and talks about women in science, technology, engineering, and mathematics (STEM). There will be a Livestream conversation related to Coded Bias on Thursday, November 19.

“East Meets West: The Films of Ulrike Ottinger” runs November 20, 2020 through March 14, 2021. “Berlin-based filmmaker Ulrike Ottinger was to be a guest in spring 2020 for a series of her films complementing a MATRIX exhibition of her photographs. Then COVID-19 arrived. As BAMPFA works toward reopening the BAMPFA galleries this winter, they will share Ottinger’s films on their streaming platform, accompanied by interviews with the artist. Together, these screenings and conversations offer a chance to get at the heart of an extraordinary body of work made over the last four decades.”

Each week you can select from an impressive collection of first run movies and beautiful restorations.

In November this includes many documentaries: the locally made Irmi having its “theatrical premiere” (read C.J. Hirschfield’s article); Frederick Wiseman’s newest work, City Hall; an exuberant account of the 1970s grassroots antifascists behind Rock Against Racism, White Riot; and biographies of Frank Zappa, RGB and Oliver Sacks.

The Berkeley Art Museum is known for its fine exhibits of Asian art and the new documentary Edo Avant Garde by Linda Hoagland is a perfect compliment. A conversation and Q&A with director Linda Hoaglund and Yukio Lippit, an eminent American scholar of Japanese art and professor of history of art and architecture at Harvard University is available here (free).

Restorations range from Fellini’s La Strada, Claude Sautet’s Classe tous risques and Flowers of Shanghai by Hou Hsiao-hsien to the rarely seen Czech science fiction Ikarie XB-1 based on a novel by Stanislaw Lem and William Greaves’ Nationtime capturing the energy and urgency of the 1972 National Black Political Convention.

Short films have always been an essential part of the BAMPFA programming and this rarely seen Brussels Loops is especially exciting. 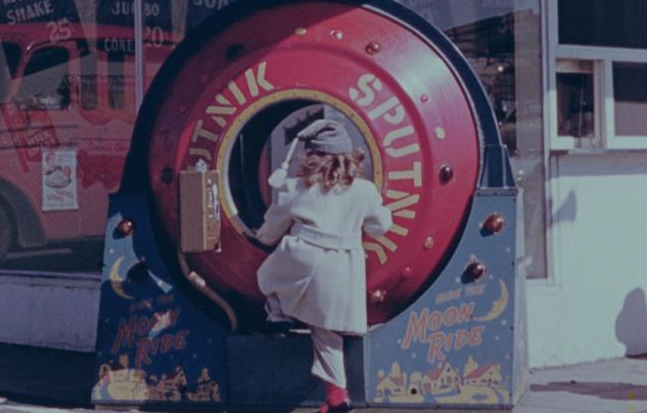 “Originally made for the American Pavilion at the 1958 Brussels World’s Fair, the short silent films compiled in Brussels Loops expand beyond the picturesque, propagandistic vision of the United States for their intended global audience. Indeed, their energy and kineticism provide a truly inquisitive look into the wide variety of landscapes in late 1950s America. This collaboration of Shirley Clarke and D. A. Pennebaker has new musical accompaniment by Cal student Ryan Shah provides a contemporary spin on a rarely seen but still resonant mid-twentieth-century treasure.” Collette Keating  A CineSpan conversation with musician Ryan Shah and BAMPFA Student Committee members Collette Keating, Katherine Schloss, and Julia Cunningham can be viewed here.(free)

A unique resource available to anyone is the CineFiles, an ongoing project of the BAMPFA Film Library and Study Center. It contains scanned images of reviews, press kits, film festival and repertory theater program notes, newspaper articles, and other ephemera from the extensive collections. Explore it here.

There are many ways that you can support BAMPFA including becoming a member. Other options are explored here.

Double your impact as membership and donations will be matched dollar for dollar by a generous family gift.

Film Curator Kathy Geritz focuses on international documentary, avant-garde, and independent film. In 2010, with Steve Anker and Steve Seid, Geritz edited the major book Radical Light: Alternative Film and Video in the San Francisco Bay Area, 1945–2000 and organized the companion film series, which toured nationally. Geritz was the 2015 International Curator in Residence at the new Len Lye Centre in New Zealand; in 2013 she gave special presentations at the Oberhausen International Short Film Festival and the Ambulante Film Festival, and in 2012 she guest curated programs for the Ann Arbor Film Festival and The Brakhage Center Symposium. Geritz is a member of the Flaherty Film Seminar’s programming committee and teaches a course on film curating in the Department of Film and Media at UC Berkeley.

Prior to coming to BAMPFA in 2016, MacKay served as the programmer and interim artistic director of The Images Festival in Toronto, one of North America’s largest festivals of alternative cinema and media art. MacKay’s programming activities have also included positions as guest curator at the Ryerson Image Centre; guest programmer for TIFF Cinematheque; programming associate for Wavelengths, Toronto International Film Festival; and curator of installations for The 8Fest. She cofounded Early Monthly Segments, a screening series that presents historical and contemporary experimental works, and has served as the chair of the Board of Directors of the Liaison of Independent Filmmakers of Toronto (LIFT). Her wide-ranging areas of interest span historical and contemporary periods with an emphasis on independent film.

Since her appointment as Senior Film Curator in 2005, Susan Oxtoby has organized several major film series for BAMPFA, including retrospectives of Michelangelo Antonioni, Robert Beavers, Ingmar Bergman, Jacques Demy, Rainer Werner Fassbinder, Howard Hawks, Akira Kurosawa, Pier Paolo Pasolini, Satyajit Ray, and Agnès Varda, among others. In 2014, Oxtoby co-curated Discovering Georgian Cinema, the largest retrospective of Georgian film ever mounted in North America. Prior to her arrival at BAMPFA, Oxtoby was director of programming at Cinematheque Ontario, the year-round public screening division of the Toronto International Film Festival Group (TIFFG). In 2005 and again in 2010, she was appointed to five-year terms on the National Film Preservation Board, which advises the Library of Congress on films to be named to the National Registry. From 2001 to 2005, she served as a member of the Executive Committee of the International Federation of Film Archives (FIAF). Oxtoby has directed two independent films, All Flesh Is Grass (1988) and January 15, 1991: Gulf War Diary (1992). In 2015 she was honored with a Chevalier in the Order of Arts and Letters by the French Ministry of Culture and Communication for her help furthering the arts in France and throughout the world, and a Medal of Honor by the Democratic Republic of Georgia.