For ​twenty years my office was in the Saul Zaentz Building in Berkeley. In addition to the movies Saul produced, there were award-winning documentary filmmakers ​plus​ post-production talent​ set in a wonderful environment​ there that resulted in high profile narrative filmmakers preferring to do their post-production at the facility​ rather than at the Hollywood studios​.  You might see a ​celebrity.

One day in early 2000 I was ​going to lunch with director ​Gus Van Sant. ​Landmark has been an early supporter of his work launching “Mala Noche” and “Drugstore Cowboy” when others were not interested. ​As the ​elevator ​door opened on the ground floor I looked out at the people waiting to get on and in my mind I could hear my bad impersonation, “Bond—James Bond.”

Gus introduced me to Sean Connery who was to do some post-dubbing for his Finding Forrester that afternoon. Those who know me are aware that I am rarely at a loss for words. ​At that ​moment​ I was.​ We shook hands and he was gone.​

I told my friend, Ira Deutchman (a film distributor, Columbia University professor and producer and director) this story and he responded, “Back in the Cinecom days, we were in L.A. for the Oscars. Our film, A Room With a View had been nominated for a bunch of Oscars and some bigshot producer threw a party in honor of the film in his Hollywood Hills home. There were a bunch of celebs at the party, and there he was—Sean Connery. At one point I went to the bar, and he was standing behind it, mixing a drink. He turned to me and asked if I wanted something, and of course I asked for a dry martini, shaken, not stirred. He gave me a look as if to say, “do you know how many times I’ve heard that?” Then he actually made me the drink.”

I first became aware of Connery ​at eleven and was charmed by him in Darby O’Gill and the Little People.  The same year he was truly evil in Tarzan’s Greatest Adventure as a drunken ex-Nazi villain. 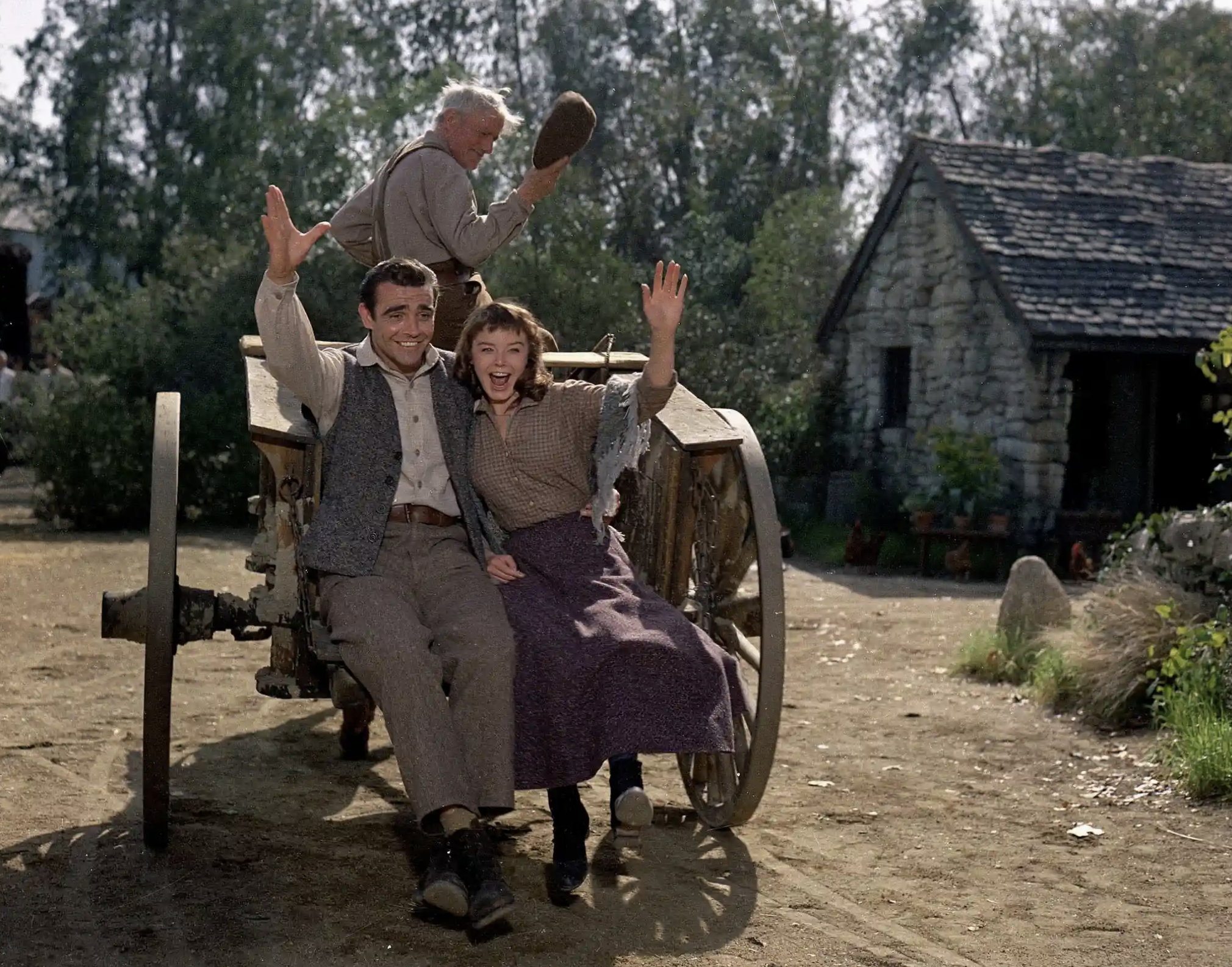 But it was three years later that I anxiously went to see Dr. No having read the book I stumbled upon the year before in a stack of paperbacks. ​My family was on vacation and I was not feeling well so I stayed in the cabin and read it all day. I did not know there was a movie being made but I thought how great it would be if someone made it. Who should play the hero?

The night the movie opened at the Uptown Theater I was there for the first show (and several more through the next week).​This was a character unlike any I’d seen before and it was exciting news that From Russia With Love was to follow in 1963​—my favorite of the Bonds.​

He was good in Alfred Hitchcock’s Marnie​ (1964)​ but the film disappointed me. I think my young teen expectations were for Hitchcock meets Bond with a Bernard Herrmann score and it was not up to expectations. The film’s reputation has gotten better and I should see it again.

Sean alternated between his Ian Fleming outings and a series of truly superb films that showed off his range as an actor. In 1965, before the release of Thunderball, he played totally against expectations in Sidney Lumet’s powerful army prison drama, The Hill. Everyone started to take his acting seriously. The superb A Fine Madness,  The Man Who Would Be King, and Robin and Marian followed. A virtually unseen 1973 Sidney Lumet crime thriller The Offence, shelved by its distributor, belongs in this group of absolute favorites and is very worth seeking out (it can be rented on Amazon and Vudu).

Other terrific films that I would happily watch again include Darby O’Gill, The First Great Train Robbery, Murder on the Orient Express, The Molly Maguires, Time Bandits, The Untouchables, Indiana Jones and the Last Crusade, The Russia House, ​The Hunt for Red October, The Rock,​ and Finding Forrester.  Unfortunately, like most artists, he made his share of mediocre films in the latter part of his career, though he was always fun to watch in cult classics Zardoz​, Highlander​, In The Name of the Rose, and The Wind & The Lion. ​ I’d love to see some of his British television work. ​

And, of course,​ there is Bond—James Bond.

​People will be watching his films this week. A good escape from current politics. It will be interesting to see how many of them play in our more enlightened and less “innocent” times. ​Some of the attitudes reflecting the Cold War, racial stereotypes, and the treatment of women will surely be uncomfortable but there will be no doubt that we are cheering for a true movie star.

As co-director of the Telluride Film Festival, I invited Sidney Lumet to receive a Tribute in 2009. He​ was one of my favorite directors who​ made a lot of ​excellent films—and like Connery he directed some bad ones too. ​I think his book Making Movies is one of the best books about the entire process of creating a feature film. Cathy and I spent an exciting day with him at his apartment with ​a ​follow-up meeting. He accepted and was excited about it. One day he said, “If this is as good as I think it is going to be, can I suggest a Tribute to Sean?” They had made five films together.

Sean Connery, Dyan Cannon, and director Sidney Lumet on the set of The Anderson Tapes (1971).

A month before the Labor Day Tribute Sidney called to cancel his appearance because a new project, L​a​ Brava had gotten the green light and he needed to start pre-production for an October shoot. This Elmore Leonard book had a long history of almost happening with Dustin Hoffman as the star. Martin Scorsese, Francis Ford Coppola, Hal Ashby (​all ​in the mid-80s), and the Coen Brothers (in 1996) were attached at various stages.

By October the funding had fallen through and Sidney promised he would come for the tribute in 2010 if the movie wasn’t resurrected. It was a double-edged sword because of course he really wanted to make this movie. But, ironically,​ Elmore had told him about his own terrific experience at Telluride in 2000.

In spring, 2010 he felt he could not make a commitment because there was still hope for La Brava. But what he didn’t tell me was that he had cancer and his health was not good.  Later in the year his daughter Jenny revealed to me that truth and ​Sidney​ passed away in April, 2011.

No Sidney and no Sean Tributes but it was fun to dream.

He was working full time by the time he was 13, out of school and employed as a milkman for St. Cuthbert’s Co-op, reports The Scotsman — delivering fresh dairy products around town in the wee hours of the morning. That was followed by enlistment in the Royal Navy (and two tattoos: “Scotland Forever” and “Mum and Dad”). Once he was out (early discharge for stomach ulcers) he worked as a nude “life model” for an Edinburgh, Scotland art school, and also drove trucks locally. Read More. 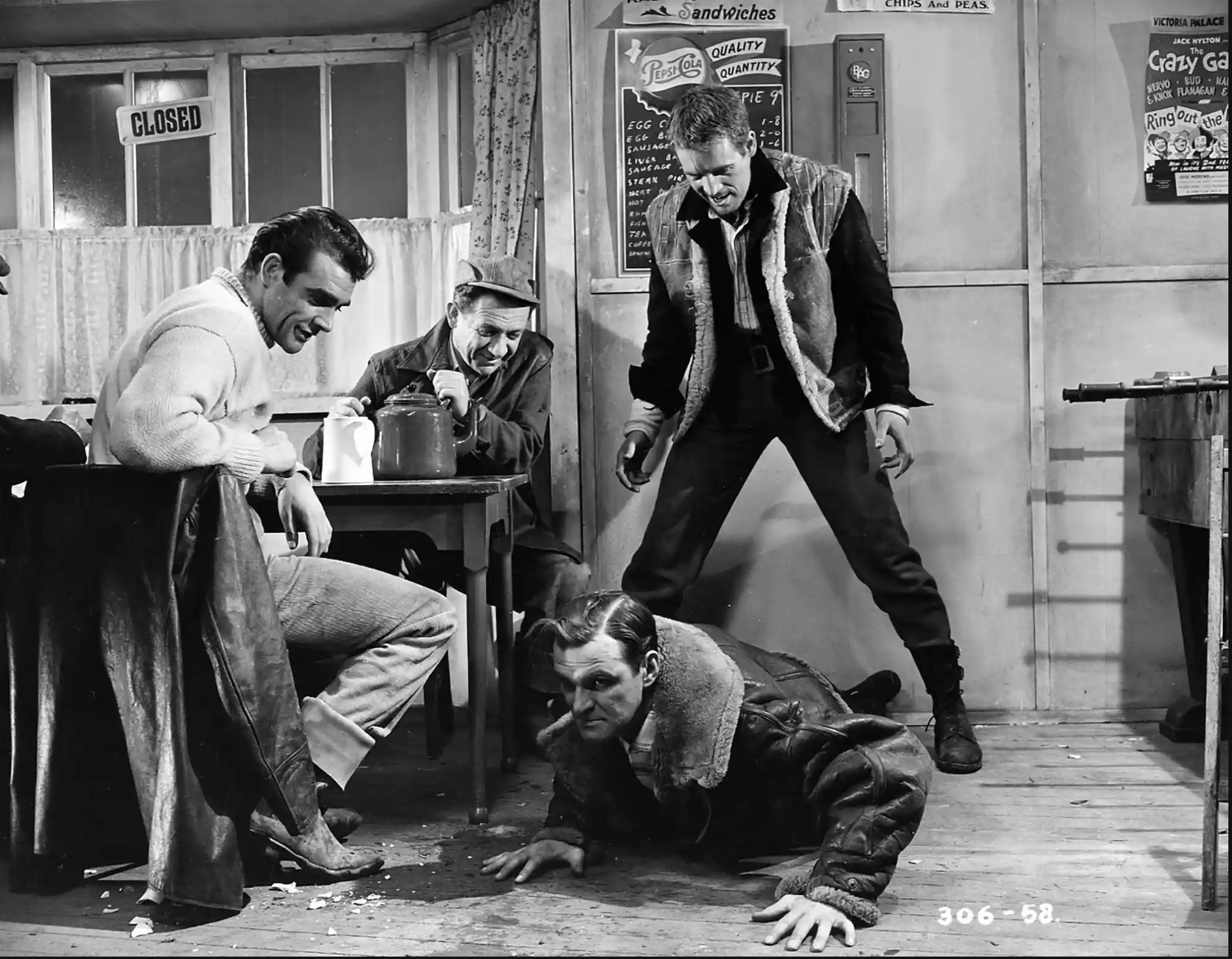 Van Johnson, Sean Connery and Martine Carol battle it out in a fight scene from Action of the Tiger (1957), directed by Terence Young who directed Connery in Dr. No, From Russia With Love and Thunderball.

With Lana Turner in Another Time, Another Place (1958).

Before becoming Bond, he made his name as an actor in the 1950s and early 60s. His pre-007 roles included Count Vronsky in Anna Karenina on the BBC in 1961. 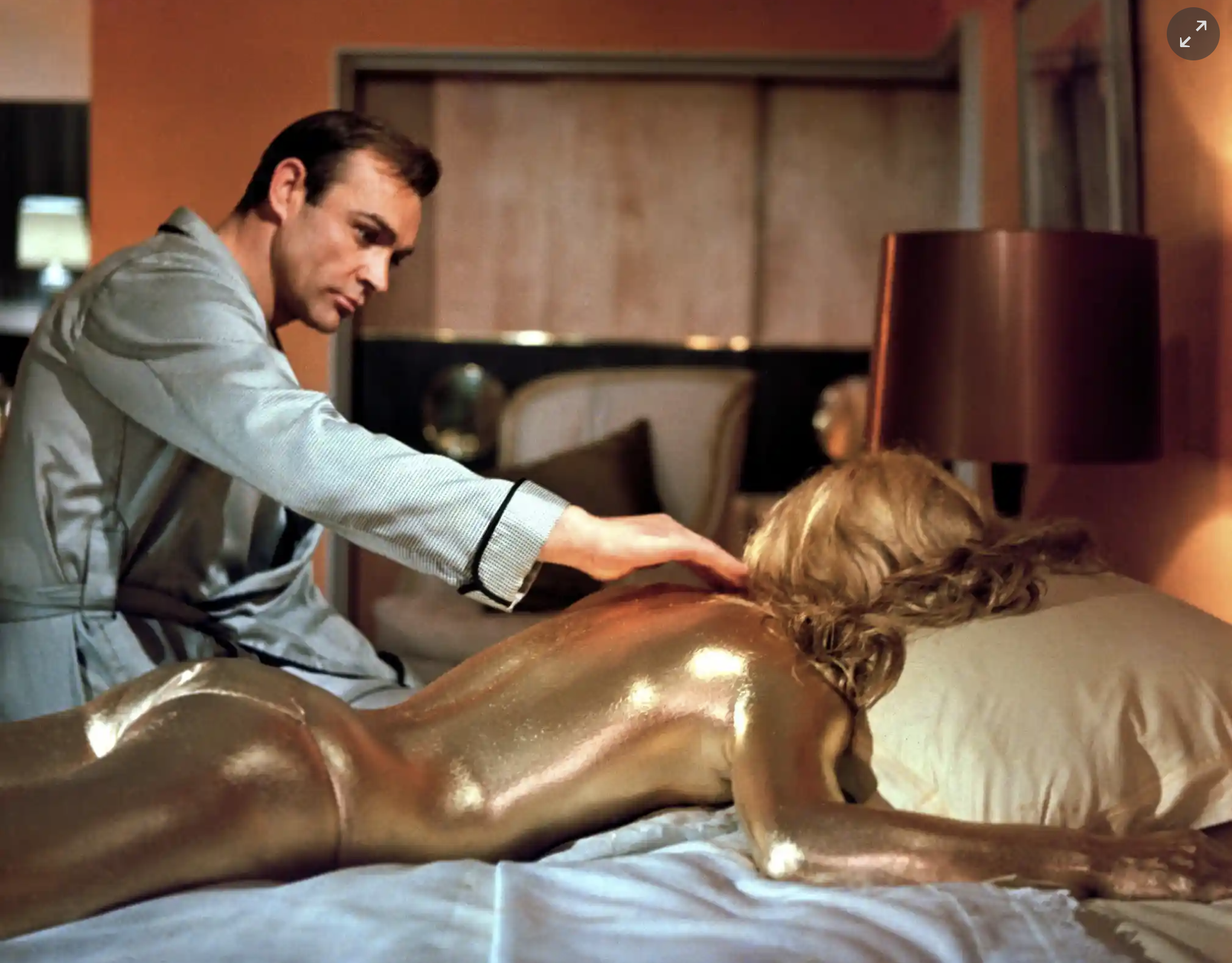 With Shirley Eaton in Goldfinger.

Leaning on an Aston Martin DB5 as Bond in Goldfinger (1964).

Connery and Bond writer Ian Fleming on the set of Goldfinger in 1964.

Sean flies Little Nellie, the nickname given to a heavily armed autogyro in You Only Live Twice (1967) 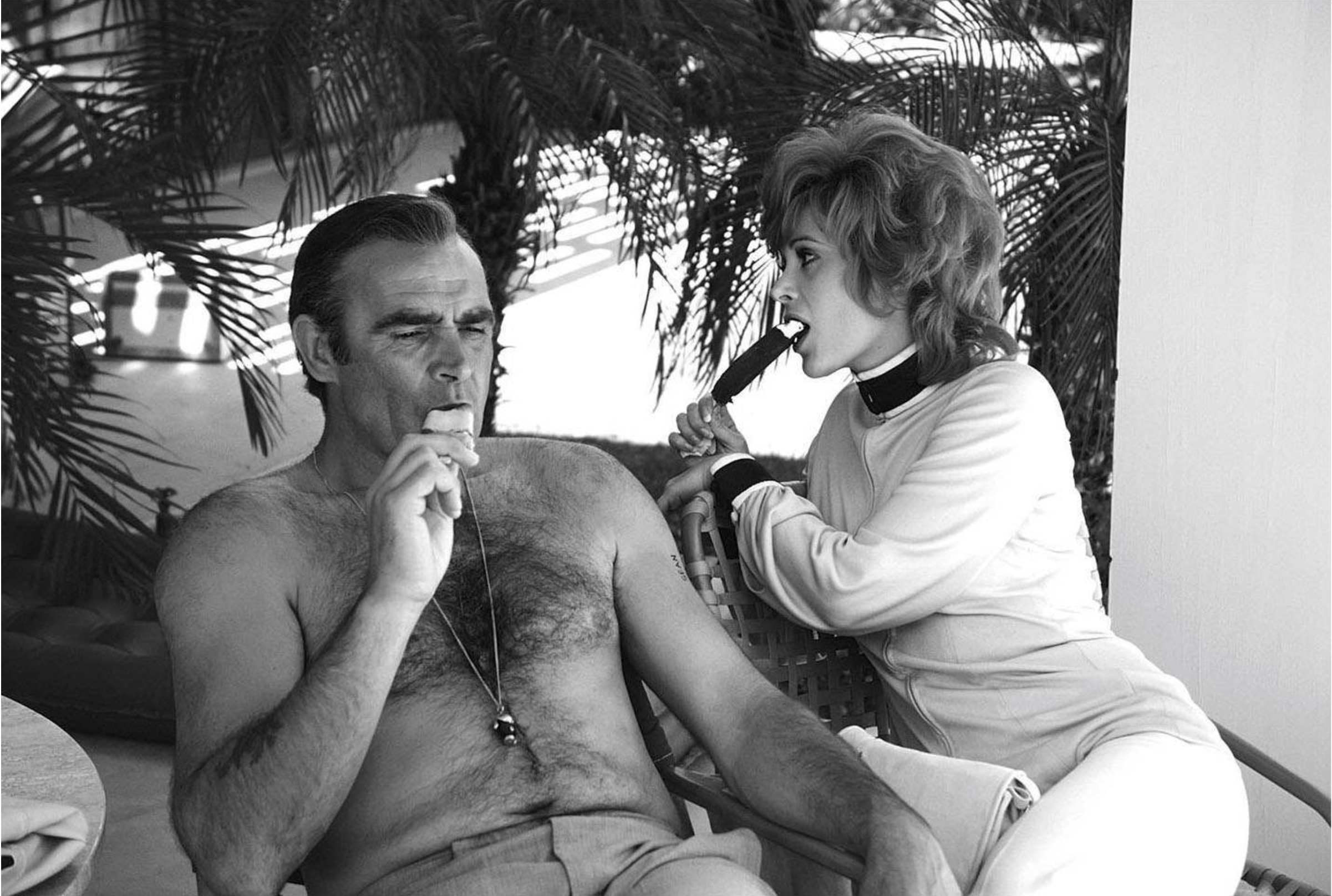 Jill St. John and Sean taking a break from Diamonds are Forever (1971). She played diamond smuggler Tiffany Case and was the first American to play a Bond girl. The character of Tiffany is argumentative, abrasive, loud, and brash when compared to previous Bond girls who were more demure. 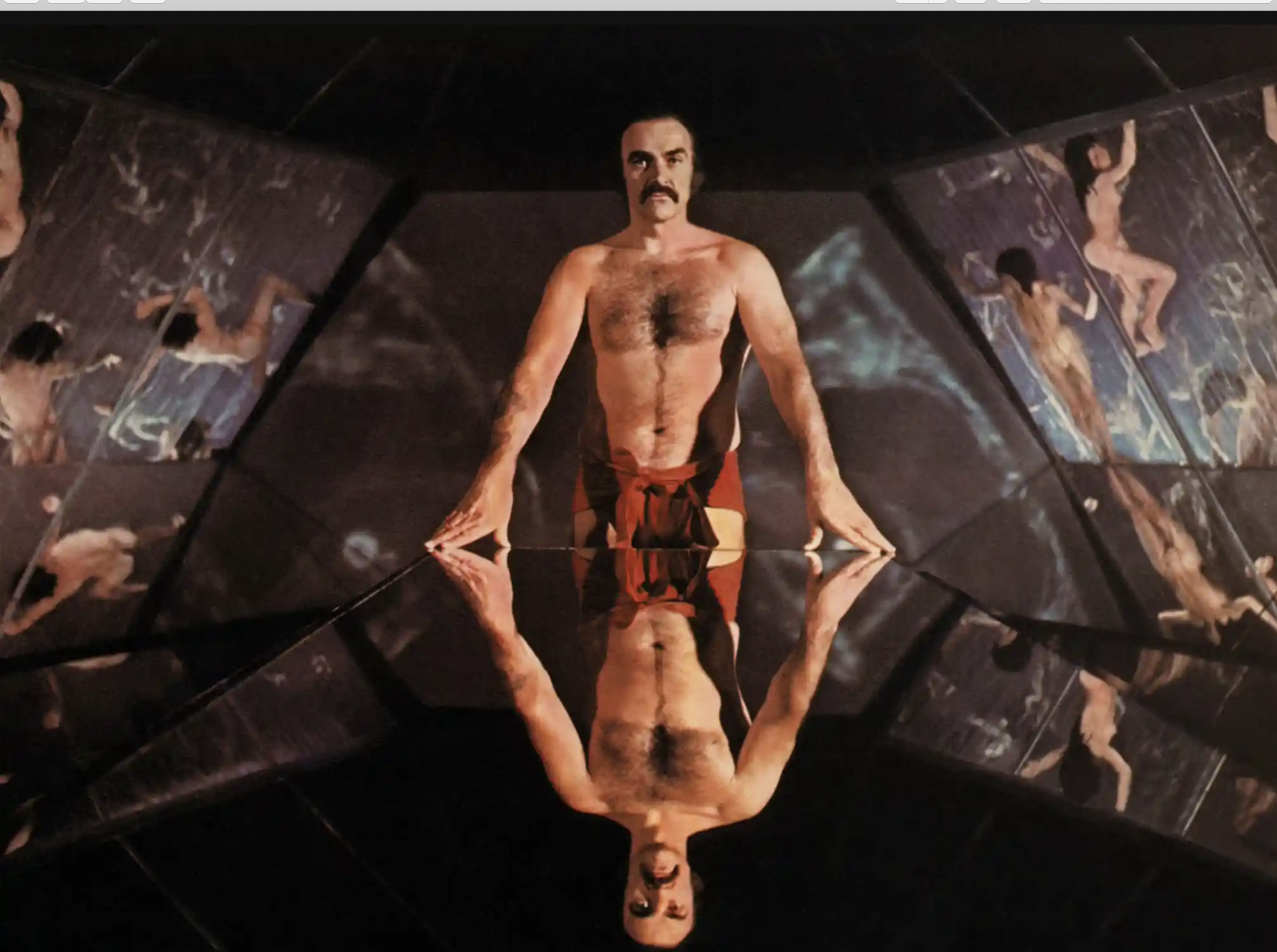 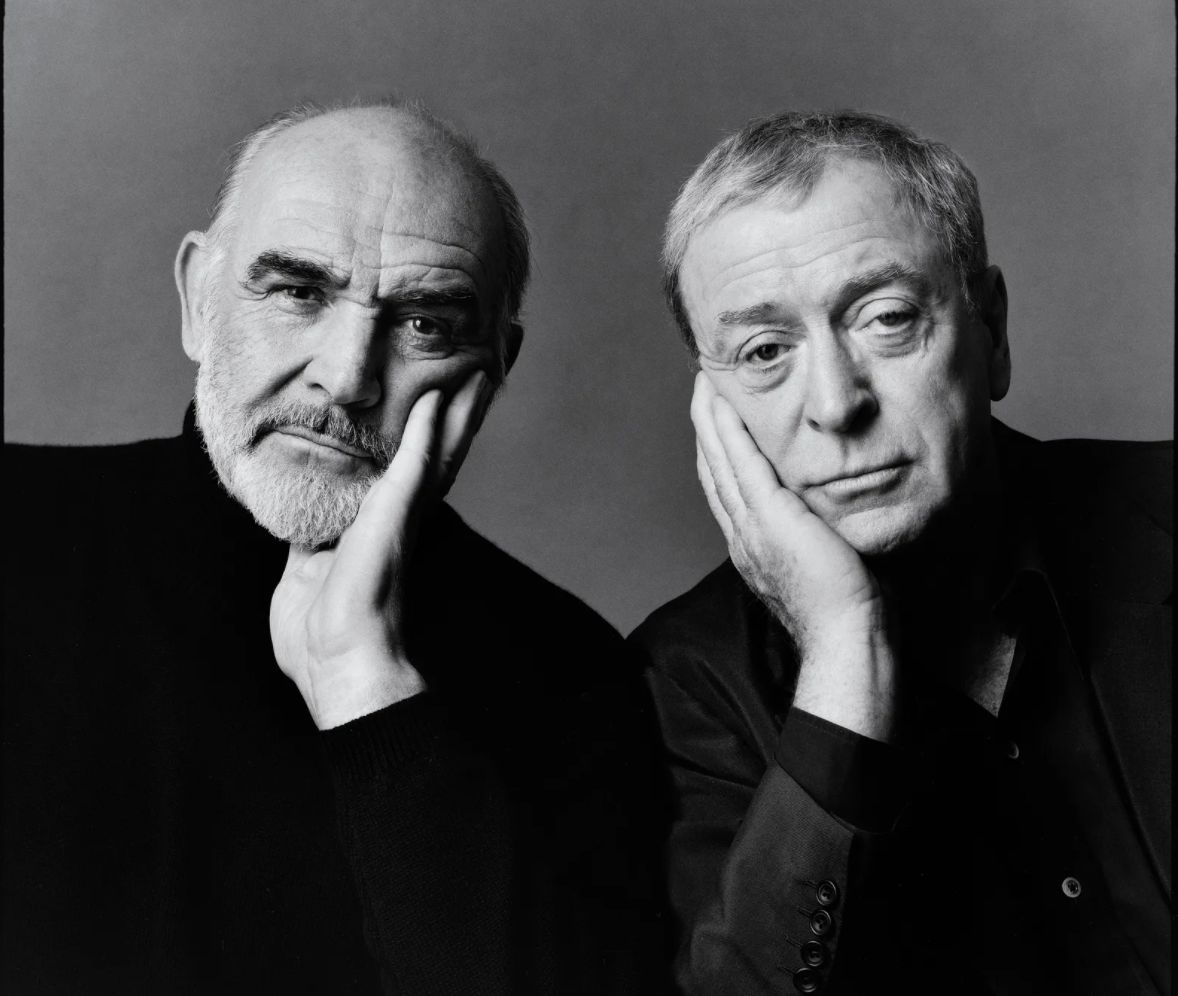 Sean Connery and Michael Caine, best friends, were the subjects of an April 1999 Vanity Fair article by Graydon Carter. Photo by Michael O’Neill 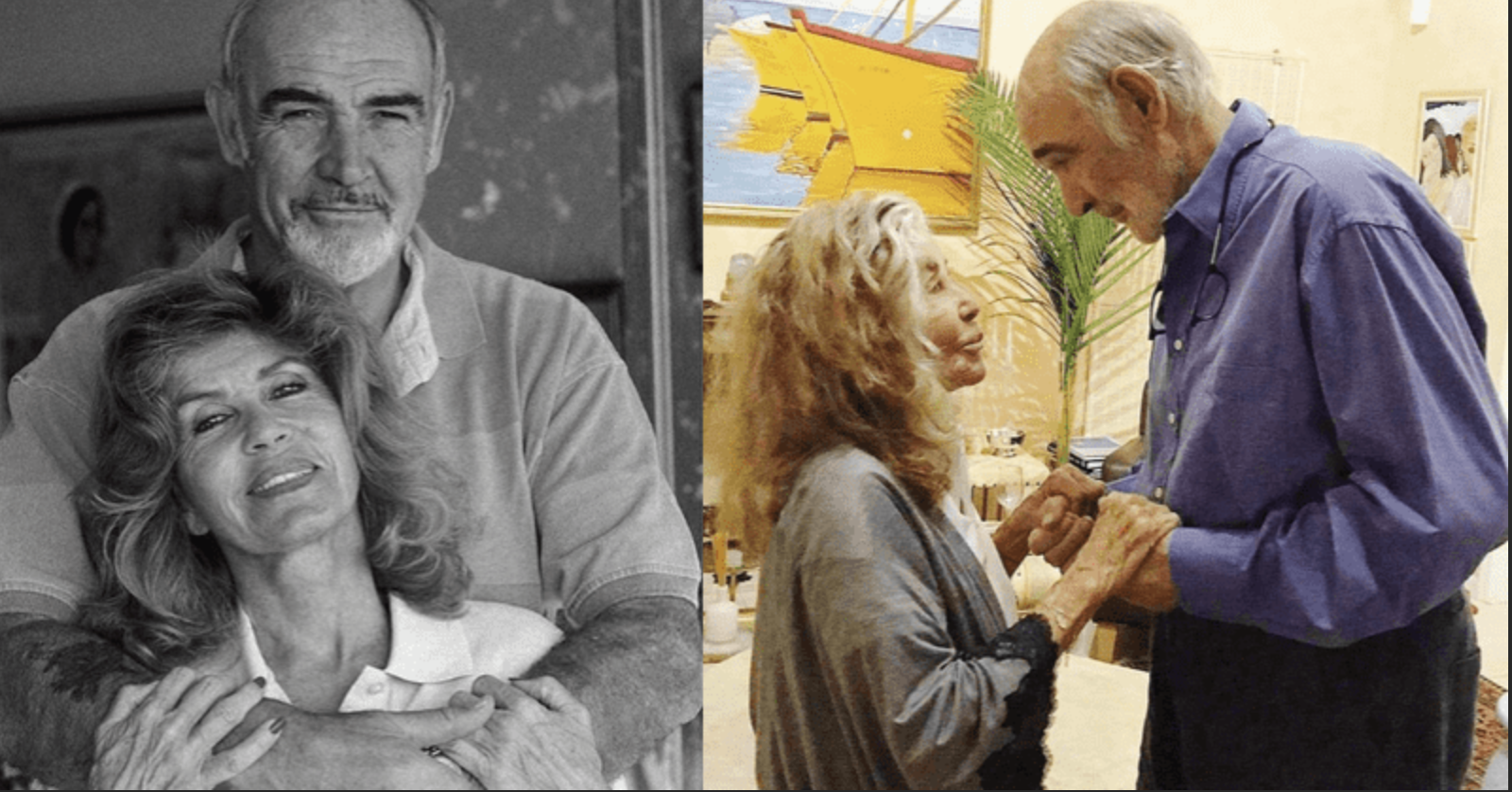 With the love of his life, Micheline Roquebrune Connery, married 45 years

WHAT IF SEAN CONNERY HAS BEEN IN CASINO ROYALE?

Winning the Oscar for Best Supporting Actor in The Untouchables(1988).

Known for his ice-cool demeanour, Connery appeared slightly puzzled, and then amused, by the prize at the 4th Annual Bahamas International Film Festival in Nassau, Bahamas (2007). For more info.

Director Gus Van Sant, Sean Connery and Rob Brown at the premiere of Finding Forrester in 2000

He retired from acting in 2006. On his 78th birthday in 2008, Connery launched his autobiography, Being A Scot at the Edinburgh International Book Festival. 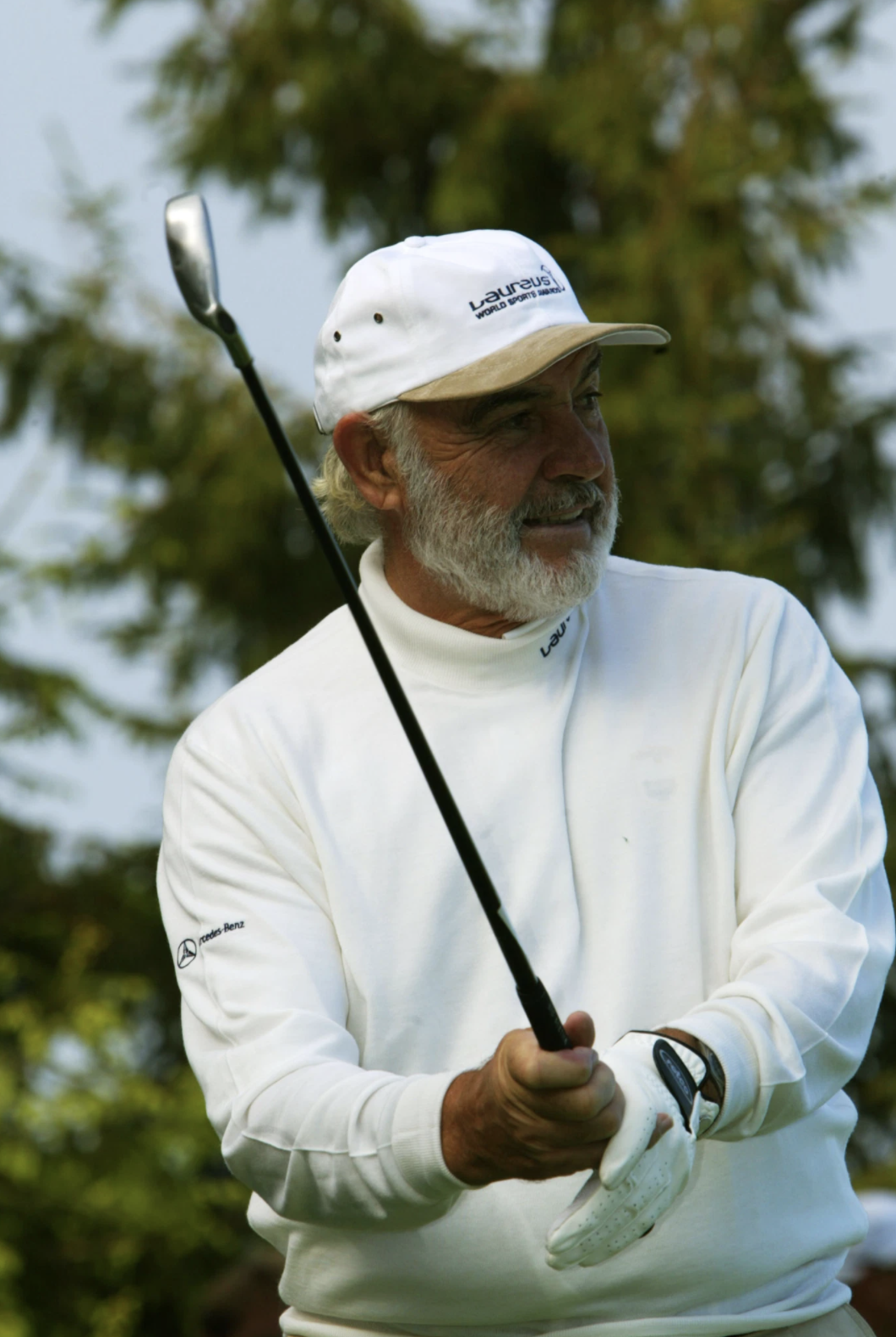 A constant through his career…a good round of golf

A good chronological collection of photos at Entertainment Weekly.

The Hollywood Reporter offers many memories from those who knew and worked with Connery. 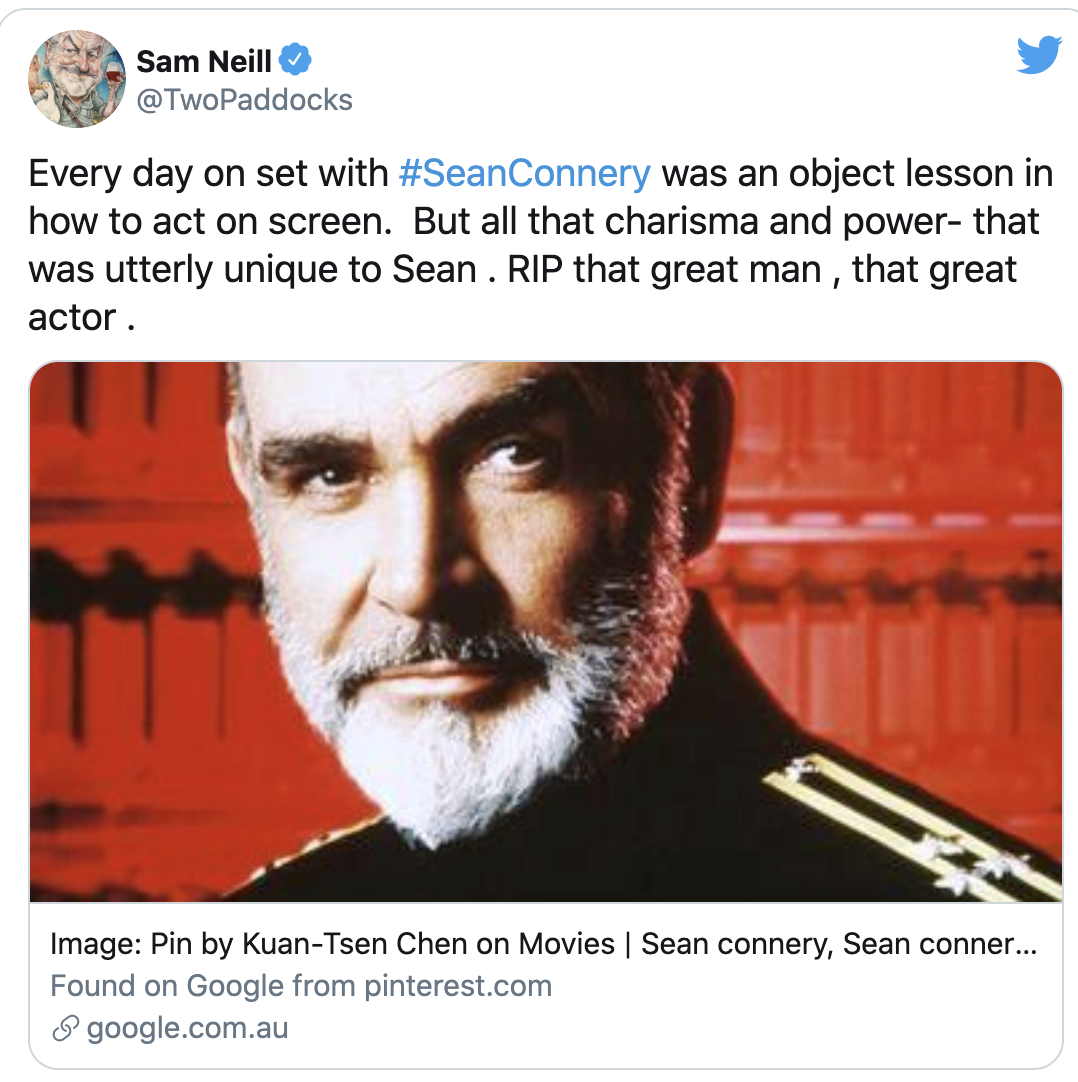 Variety offers its own tributes. 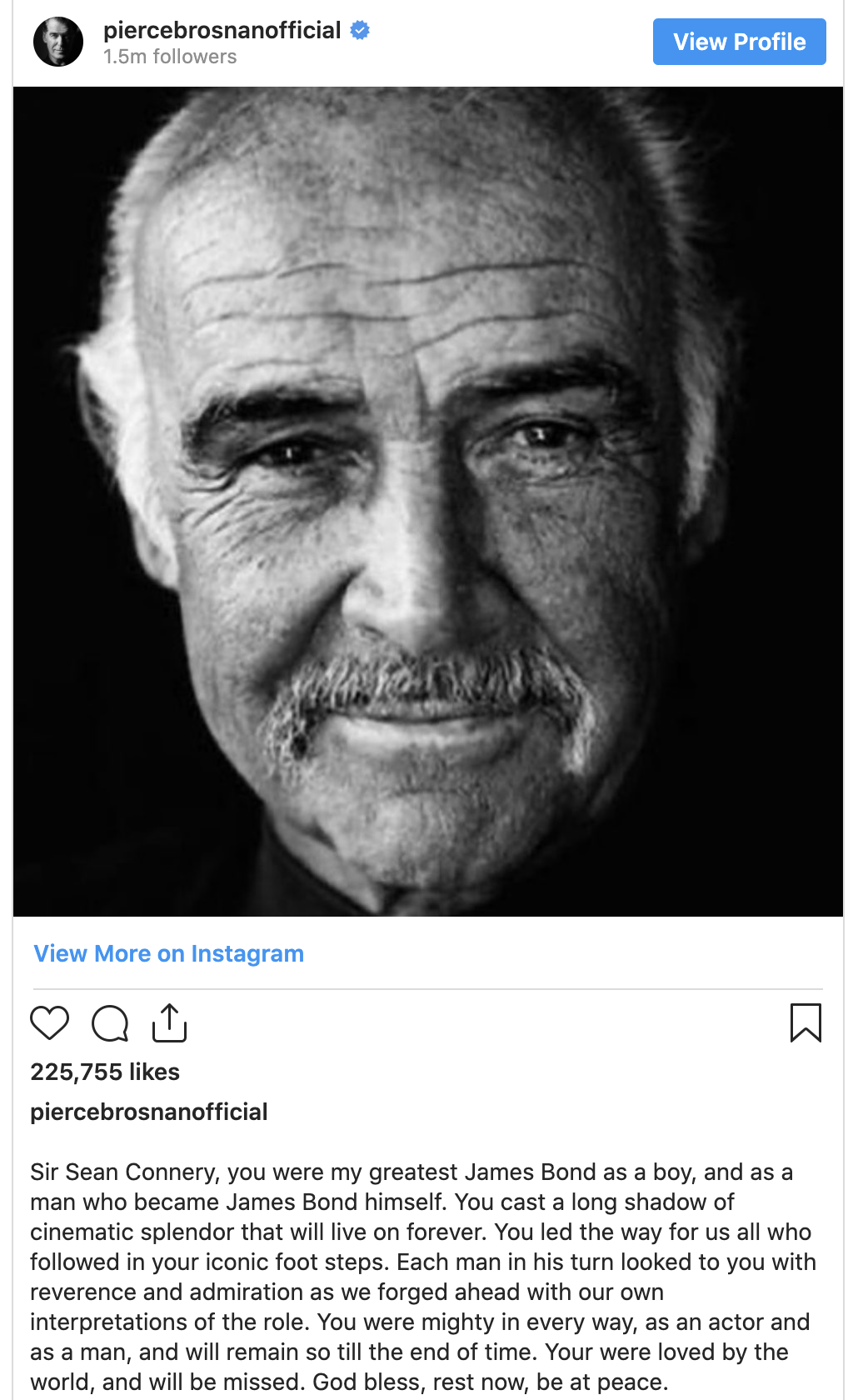 Harrison Ford, Robert DeNiro, Kevin Costner and Daniel Craig are among those who have something to say at DEADLINE .

Edgar Wright, Spike Lee, Kevin Smith and Sam Mendes are among those who commented on Connery as reported at Indiewire. 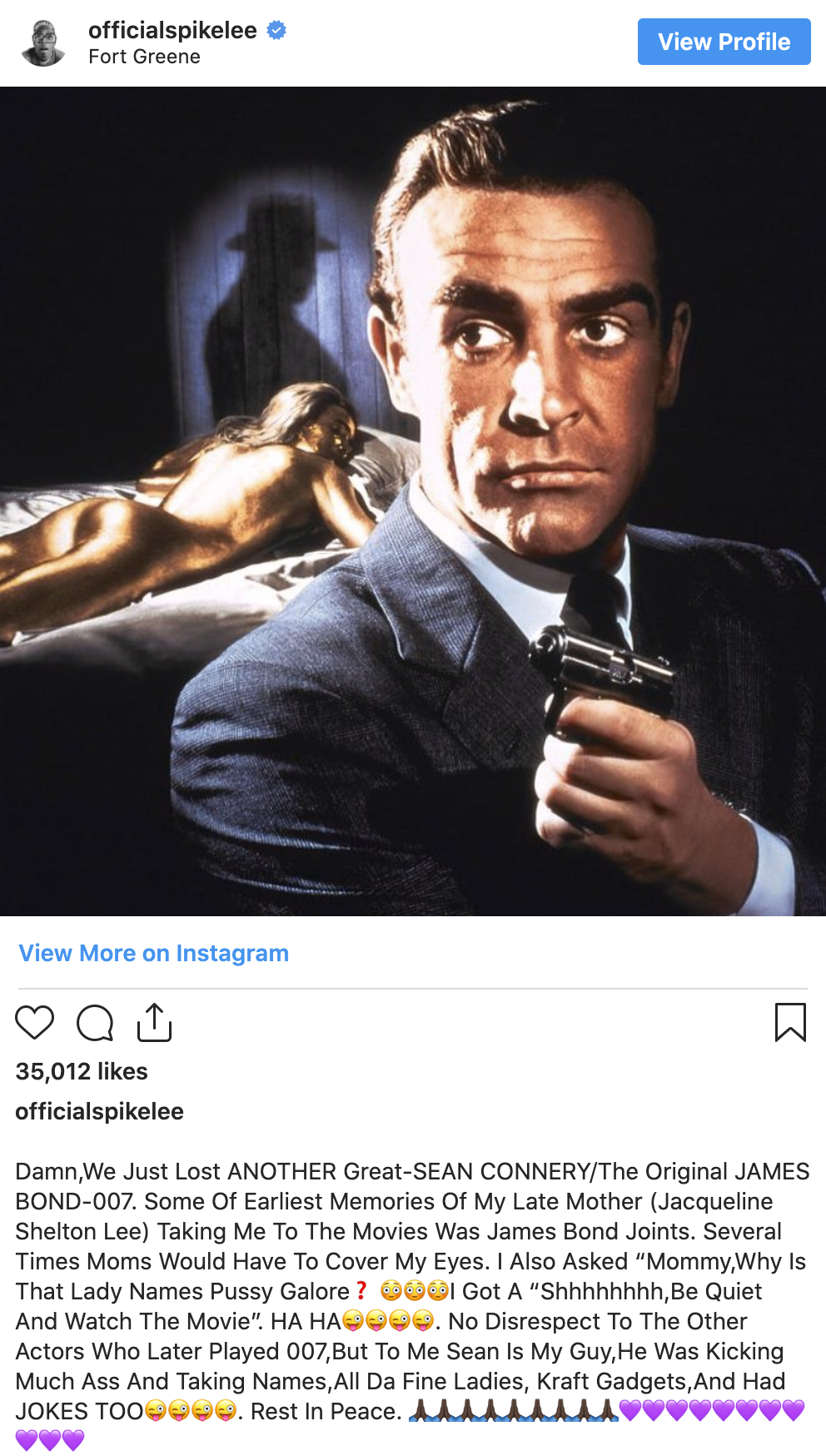 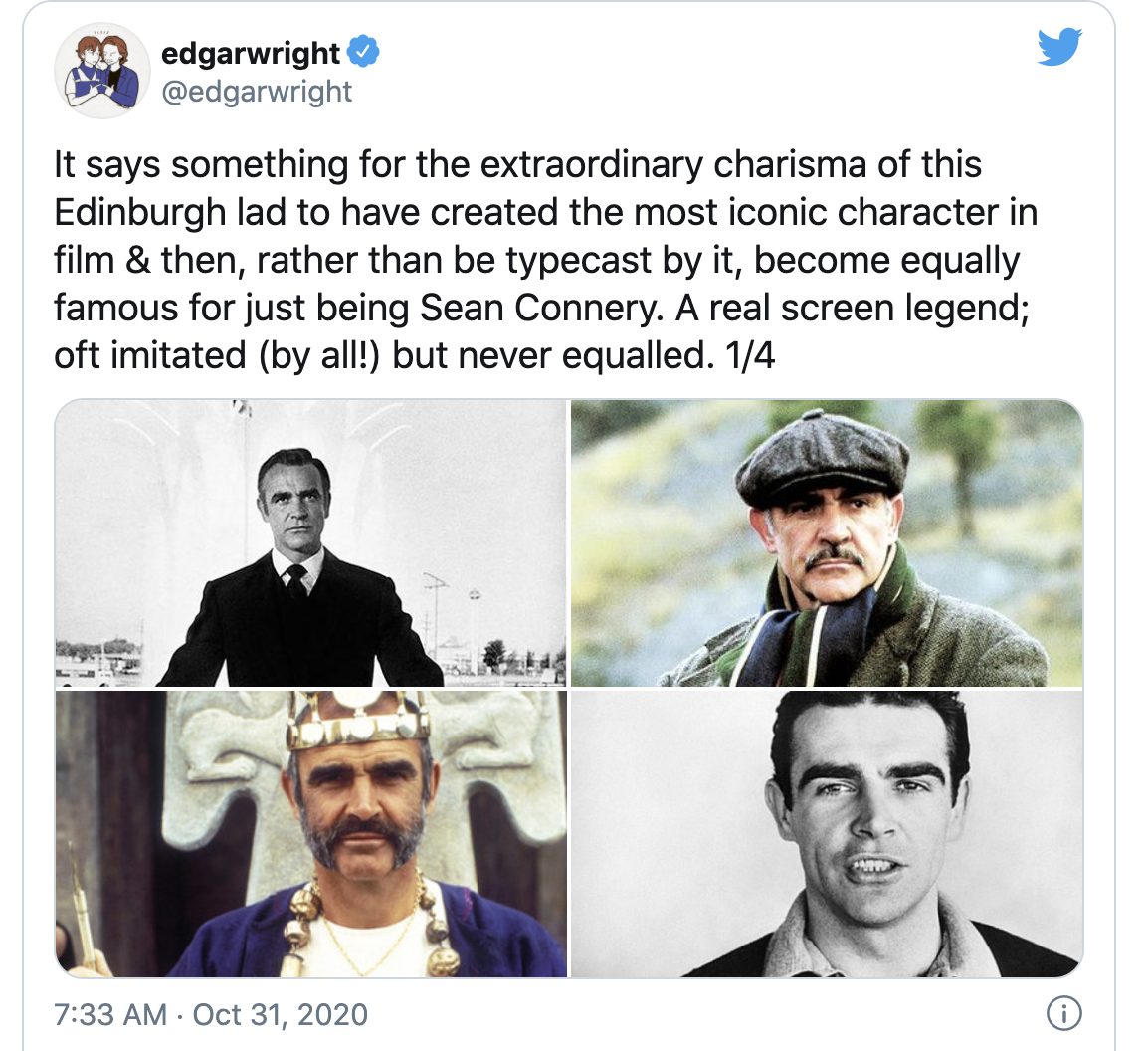 Connery’s face projected onto the rocks beneath Edinburgh castle to mark the opening of the Edinburgh film festival.
Photograph: Simon Grosset/PA