This is not an unbiased review of the new movie A Chef’s Voyage (now available on Virtual Cinema). I am an admirer of David Kinch and Manresa.  Over the years he and I have become friends, chefs with vastly different cooking styles and of different generations. (He is the same age as my son, Evan.)

Joyce Goldstein making ravioli in the Square One kitchen in 1985.

I had never planned on a restaurant career. I was a busy mother of three, a self- taught, passionate, and scholarly home cook, and a culinary teacher for other home cooks.  By chance, in my late forties, I filled in for a vacationing cook at Chez Panisse, stayed there for three years as Cafe chef, and fell into the profession by default. I opened my restaurant, Square One, in 1984 at the crazy age of fifty and retired in my mid-sixties. Square One was a large restaurant in downtown San Francisco that specialized in the robust and rustic food of the Mediterranean, cooked with California ingredients. Portions were large and casually but carefully plated. No time for a precise arrangement with just four cooks on the line to serve over 300 meals.

David has been cooking since his twenties, having gone to culinary school, worked in France, Germany, and Japan, and in esteemed restaurants in the US.  Always refining his technique and his palate, he aspired to run a fine dining restaurant at Michelin’s three-star level.  And he is still going strong at 59.

Manresa is a medium-size restaurant based in Los Gatos, about 1 ½ hours south of San Francisco. It opened in 2002 to serve the upscale clientele of Silicon Valley.  David’s focus is on haute cuisine, combining European technique and California ingredients with creativity and deliciousness. Each dish is artfully composed and plated with a Persian miniaturist’s precision. A team of cooks arranges ingredients delicately on each exquisite plate. 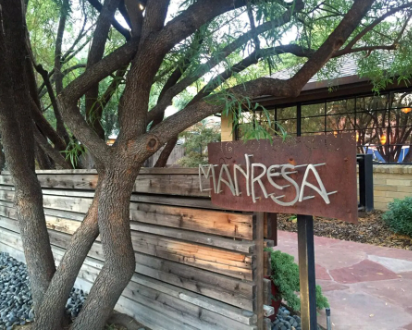 After Manresa opened and word got out about the amazing food, I made many a pilgrimage for dinner, usually in the company of chef friends or food fanatics. In the early days, the menu was not a multi-course prix fixe and you could order five dishes at appealed to you. Among our favorites were Into the Vegetable Garden and In the Tidal Pool.

The Vegetable Garden was a showstopper, inspired by chef Michel Bras.  The dirt was made of potatoes and chicory root granules, which was next layered with root vegetable purees, then bite-sized pieces of cooked vegetables, then delicate greens, then flowers and seeds. All topped with “dew” of frothed vegetable tisane. 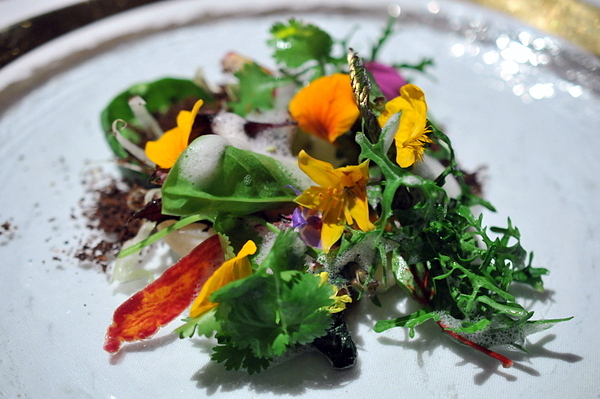 The Tidal Pool combined seasonal seafood such as sea urchins, abalone, clams, mussels, squid, in a Japanese inspired broth. It was deeply delicious and an umami explosion in the mouth. 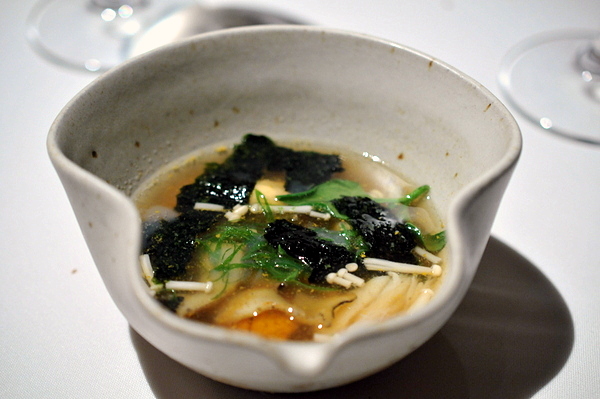 Given David’s vision, skill, and creativity, Manresa achieved its third Michelin star in 2016. To celebrate this award and commemorate the 15th anniversary of Manresa, David and his kitchen team flew to France to cook with three esteemed Michelin chefs.  David had eaten at their three-star restaurants and admired their food.  One was Oustau de Baumaniere in Les Baux de Provence,  another the famed Taillevent in Paris, and the last Le Petit Nice on the Riviera. The trip was to be a treat for the staff as many had not been out of the country before.

Organizing for the trip had to be done with military precision. They carefully packed personal kitchen tools and knife kits. They froze signature sauces and California ingredients such as abalone. They were going to be away for a little over a week to cook three dinners and a few lunches for knowledgeable French diners and could not forget anything essential to their work. This Manresa kitchen team had worked together for so long that they were in unified step like a corps de ballet. But now they would be working in three unfamiliar kitchens, coordinating with a French-speaking staff and using local ingredients. The Manresa team was nervous and excited.

In the film, director Rémi Anfosso brings us closeups of the most beautifully plated dishes, every herb, and leaf in place. Pigeons are butchered. Fish is freshly caught off the dock. Sauces are tasted and tasted again. It is engrossing to observe the cooking and to admire the interaction of the skilled kitchen teams, their concentration, and dedication to the work. I could not help but notice how very young the teams were in all the restaurants, and wonder how long they would remain in this kitchen, in this profession.  David, of course, seemed cool, collected, and contemplative. He had achieved his dream to go mano a mano with his peers in France.  He also was thinking ahead, to how long he could continue this level of intensity in such a physically and mentally demanding field. 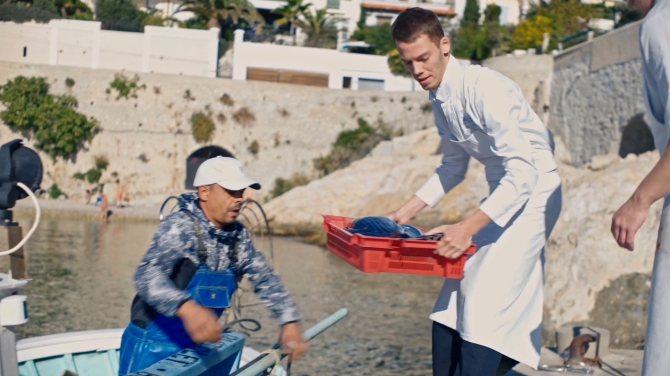 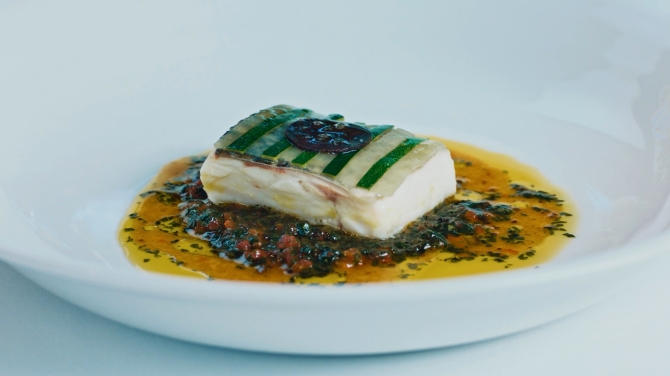 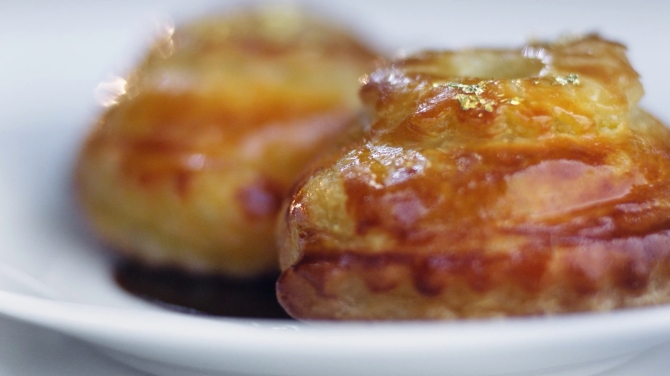 For someone interested in cooking, the film is inspiring and a joy to watch. It also made me sad for what we have lost under the Covid epidemic.  During these terrible days of semi-isolation at home and the closing of indoor restaurant dining, the film made me nostalgic for the days of true hospitality and the pleasure of restaurant dining.  We await the time until they can reopen so we can be enveloped in the sensual wonders of Manresa.

A Chef’s Voyage is currently showing in Virtual Cinemas where you stream it at home and the “admission price” is shared between your favorite independent cinema and the filmmakers/distributors. Here is a list of presenting venues.

Enjoy Cari Borja’s musings about David Kinch and the movie.

David Kinch has provided EDF with a sneak preview of three new recipes from his upcoming book, At Home in the Kitchen, due in 2021. 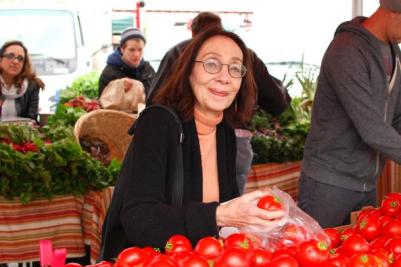 Joyce Goldstein is a prolific cookbook author, cooking teacher and lecturer. As a consultant to the restaurant she improves existing recipes, adds new ones to complement the menu and works with culinary staff to refine flavors and execution.

For twelve years she was Chef/Owner of the ground-breaking Mediterranean restaurant, SQUARE ONE. Her menu presented the foods of Italy, Spain, France, Greece, Turkey, the Middle East, and North Africa. SQUARE ONE won numerous prestigious industry awards for food, wine, and service. Prior to SQUARE ONE, Joyce was chef of the Cafe at Chez Panisse for 3 years. She also served as Visiting Executive Chef of the Wine Spectator Restaurant at the Culinary Institute of America at Greystone in the Napa Valley.

Joyce was voted San Francisco Magazine‘s Chef of the Year in 1992 and received the James Beard Award for Best Chef in California for 1993, and the lifetime achievement award from Women Chefs and Restaurateurs, of which she is a Founding Board Member.

She is a prolific cookbook author. Many of her books have won industry awards. She also writes for many magazines such as Fine Cooking, Cooking Light, Wine & Spirits, Food & Wine, Vegetarian Times, the Sommelier Journal and the San Francisco Chronicle.

She reviewed the movie THE STURGEON QUEENS for EDF.

Try several recipes from her book The New Mediterranean Jewish Table published on EatDrinkFilms with interviews and videos of Joyce in action in the kitchen.

The Wisdom of Joyce Goldstein

Adam Goldberg reports a multi-course dinner and two of Joyce’s favorite dishes at Manresa on his blog, A Life Worth Eating. 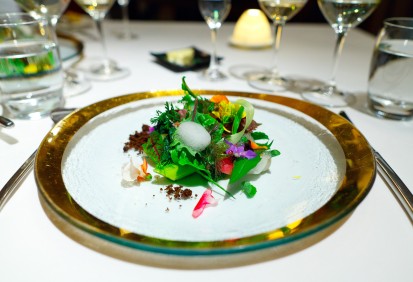 “Into the vegetable garden – A handpicked showcase of the day’s herbs from Love Apple Farms combined into a beautiful, colorful potpourri. I loved this dish and Kinch’s local interpretation of the gargouillou. This dish was a collection of textures both smooth and crunchy and herbal flavors ranging from sweet to bitter. My only complaint is that it’s a bit awkward to eat these delicate, almost weightless leaves with a full-sized fork and knife; it would have been easier with a pair of fine chopsticks or culinary forceps. This is a dish that connects Manresa to its surroundings, a reminder that California has the finest produce in the country.”

Christine Muhlke writes about Into the Vegetable Garden for The New York Times.

“A summer tidal pool – A David Kinch classic, a dish that has taken on various forms over the years. This was the best version yet. Chunks of Monterey bay abalone, sea urchin, foie gras, local spot prawn, and hinoki mushroom swimming in a beautifully salted dashi broth. It was as if chef Kinch took a list of my favorite Japanese ingredients and combined them into one dish. This was a simple dish with a very complex flavor; sweet sea urchin and prawns, buttery foie gras, meaty abalone, and earthy hinoki combined into a broth of absolute perfection. This is a dish where chef Kinch exercised culinary restraint, letting a simple dashi broth serve as the clean canvas for the natural flavors of the sea.”