I have been thinking a lot about Agnés since she died just shy of 91 years old on March 29, 2019. She made her first film, La Pointe Courte in 1954, establishing the French New Wave five years before the boys, François Truffaut, Jean-Luc Godard and others got into the act. She appeared this past February at the Berlin film festival for the Premiere of her last film, an autobiographical piece called Varda by Agnés. To celebrate the theatrical release of this new film and her life, there is a traveling retrospective of her films playing around the U.S. this winter. (See details below)

For a long time I thought that Agnes Varda had the coldest eye in cinema. The thought hit the first time I saw Le Bonheur (1965) – the sight of the first wife so easily replaced by the second, as if the husband never paused between his wife’s suicide and his marriage to #2. When I told Varda that I thought Le Bonheur was brutal, she shrugged: “People do things like that.”

The next time I had the feeling about her cold eye was with her 1988 Kung-fu Master  (now Le petit amour), where she shows a boy of about 14 in bed with the mother of his good friend. The young boy is played by Varda’s son Mathieu Demy, and the mother by her close friend Jane Birkin. It seemed to me a pretty cold thing for a filmmaker to do, but when I asked Varda if she found it hard to shoot those scenes, she admitted that she’d set up the shot and then leave the set.

Overt violence was a different thing for her though and there’s none in her films. When I went with her to see Sergio Leone’s Once Upon a Time in America, she turned away from violent scenes and hid her eyes. Later, she said, “Why should anyone look at that.”

Varda has always looked at the world without blinking – obvious images like the man eating frogs and throwing up on the street in Cleo From 5 to 7 (1962), and her less obvious but still blunt approach in the short film  Ulysse (1983) when she pushes –maybe forces — a man to remember a painful time in his childhood. Yet that sense I had of her slid away after Jacquot de Nantes (1991) which radiates gentleness and deep-seated, love for her husband Jacques Demy who was seriously ill during the filming.

She talked about shooting that film with a depth of tenderness that I hadn’t seen in her work or heard from her before. To make Jacquot de Nantes (1991), Varda made a deal with her husband: he would share with her memories of his childhood and she could make any film she wanted with them. She filmed some of the movie in the actual gas station his parents ran when he was a kid – a source of Demy’s Umbrellas of Cherbourg (1964). 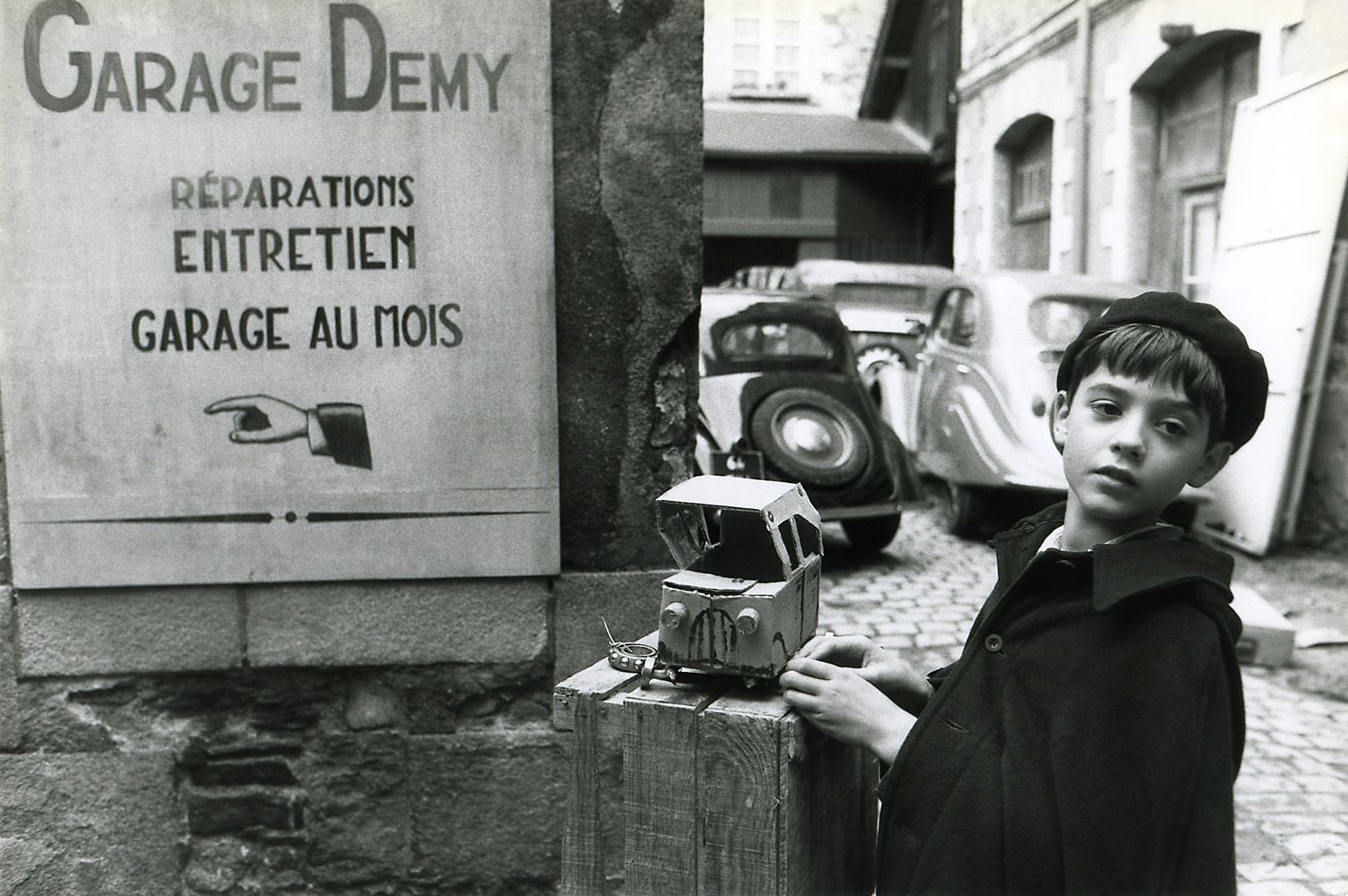 Later in the film, young Jacques makes his first film – a short animation of a German plane shot down during the liberation of Brittany, where Demy was born.

In Jacquot, the bit of that animation shown was a careful reproduction of the fragile original, which Varda and Demy found in an old storage room in the former Demy home. Varda said that while she was shooting a scene of Mme. Demy working in the gas station with her son Jacques, Varda suddenly realized that the actual Mme. Demy and Jacques were watching the shooting from right behind her. She turned to them in a moment of panic and asked if it was okay to be doing this. Happily Jacques and his mother said it was.

It seems to me that ever since Jacquot de Nantes, Varda’s eye is warmer and more reflective. Her affection for nearly everyone in The Gleaners and I (2000) is obvious. The exception is the apple grower who compares a rotten apple to a useless woman. She doesn’t argue with him; she just holds the shot on him long enough to make you despise him. (Lesson: never go misogynist in front of a camera held by a woman as savvy as Agnes Varda).

All of her films since Jacques Demy’s death have that softness. They’re just as rigorous as ever – The Gleaners and I, The Beaches of Agnes (2008) and Faces/Places (2017) are in love with humanity, but they’re also brilliant investigations of the nature and meaning of imagery, the relation of film and photography to the people on camera and the ability of cinema to reshape how both the subjects of the film and the audiences imagine themselves.

Maybe that warmth is particular to the portraits – she told me over and over that she rejected the word “documentary” with respect to her own work. If that observation holds true then it says something about her attitude towards fictional characters as opposed to actual human beings in the world; that she holds a greater level of respect for actual people than for her own fictional creations.

Varda by Agnès is being released theatrically  by Janus Films starting in January.

A retrospective of her films, Agnès Varda: An Irresistible Force is currently playing around the country.

Rosalie Varda and Mathieu Demy continues their mother’s various works as you can see at CINÉ-TAMARIS.

At the site you can learn more about the creativity of Agnès and, purchase films and other related items, read news stories and be sure to enjoy the “Raw Footage” section.

Howie Movshovitz has been a film critic for a long time — at The Denver Post, Colorado Public Radio and KUNC.  He contributes several features a year on film subjects to National Public Radio.

In 2010 Howie co-founded the Denver Silent Film Festival where he is Director. He teaches  film and television at the University of Colorado Denver, is a long-time faculty member for the Telluride Film Festival Student Symposium and was a VISTA Volunteer from 1966 to 1969. The newest involvement with young people happened when his daughter Zoe made him a grandfather in August 2019. Howie is married to novelist and potter Janis Hallowell.

Read an interview in Westword with Howie.

His work can be found at

Where to Begin with Agnés Varda is an excellent  introduction (or reintroduction) to the filmmakers work from the British Film Institute.

Other titles can be obtained from Amazon and at many public libraries on DVD and via the library streaming service for free on Kanopy.

Agnés talks with David Jenkins about “sharing people with audiences” with the release of her film Faces, Places.

Agnés Varda and The Academy

The Criterion Collection invites filmmakers to visit their closet of DVDs to take home a selection of favorites. Varda is delighted.

A Pinterest collection of photos of Varda at play and posters for her films.

Peering through the celluloid curtain of her art installation “My Shack of Cinema” at her LACMA installation “Agnès in Californialand,”  her ode to filmmaking.  Photo © Gary Friedman/ Los Angeles Times

More photos from Agnès in Californialand.”