LSD was influencing music, painting, spirituality, and even the stock market. Tim Leary once let me listen in on a call from a Wall Street broker thanking him for turning him onto acid because it gave him the courage to sell short. Leary had a certain sense of pride about the famous folks he and his associates had introduced to the drug.

“But,” he told me, “I consider Otto Preminger one of our failures.”

I first met Preminger in 1960 while I was conducting a panel on censorship for Playboy. He had defied Hollywood’s official seal of approval by refusing to change the script of THE MOON IS BLUE. He wouldn’t take out the word virgin.

At the end of our interview, he asked, “Ven you tronscripe dis, vill you vix op my Henglish?”

I saw Preminger again in 1967. He was making a movie called SKIDDO, starring Jackie Gleason as a retired criminal. Preminger told me he had originally intended that role for Frank Sinatra. SKIDDO was pro-acid propaganda thinly disguised as a comedy adventure. However, LSD was not why the FBI was annoyed with the film. Rather, according to Gleason’s FBI files, the FBI objected to one scene in the script where a file cabinet is stolen from an FBI building. Gleason was later approved as a special FBI contact in the entertainment business. 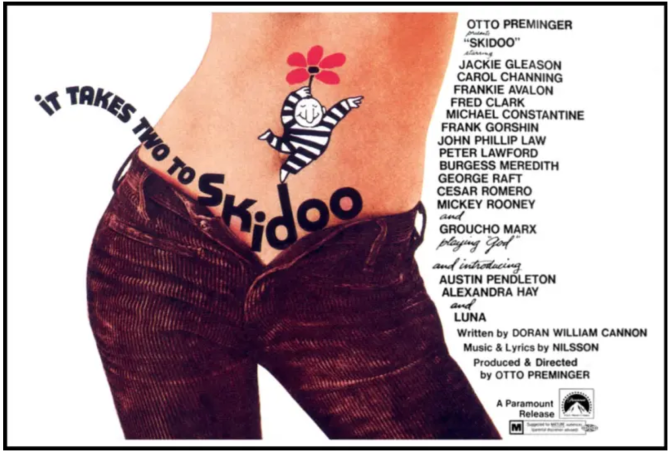 One of the characters in SKIDDO was a Mafia chieftain named God. Screenwriter Bill Cannon had suggested Groucho Marx for the part. Preminger said it wasn’t a good idea, but since they were already shooting, and that particular character was needed on the set in three days, Groucho would be playing God after all. During one scene, Preminger was screaming instructions at him. Groucho yelled back, “Are you drunk?” I had dinner with Groucho that evening. He was concerned about the script of SKIDDO because it pretty much advocated LSD, which he had never tried, but he was curious. Moreover, he felt a certain responsibility to his young audience not to steer them wrong. He had read my descriptions of acid trips, so he asked if I could I possibly get him some pure stuff, and would I care to accompany him on a trip? I did not play hard to get. We arranged to ingest those little 300-microgram white tablets one afternoon at the home of an actress in Beverly Hills.

Groucho was especially interested in the countercultural aspects of LSD. I mentioned a couple of incidents that particularly tickled him, and his eyes sparkled with delight. One was about how, on Haight Street, runaway youngsters, refugees from their own families, had stood outside a special tourist bus–guided by a driver “trained in sociological significance”–and they held mirrors up to the cameras pointing at them from the windows, so that the tourists would get photos of themselves trying to take photos.

The other was about the day that LSD became illegal. In San Francisco, at precisely two o’clock in the afternoon, a cross-fertilization of mass protest and tribal celebration had taken place, as several hundred young people simultaneously swallowed tabs of acid while the police stood by helplessly

“Internal possession wasn’t against the law,” I explained to Groucho.

We had a period of silence and a period of listening to music. I was accustomed to playing rock’n’roll while tripping, but the record collection at this house consisted entirely of classical music and Broadway show albums. First, we listened to the “Bach Cantata No. 7.” “I’m supposed to be Jewish,” Groucho said, “but I was seeing the most beautiful visions of Gothic cathedrals. Do you think Bach knew he was doing that?”

“I don’t know. I was seeing beehives and honeycombs myself.”

Later, we were listening to the score of a musical comedy, FANNY. There was one song called “Welcome Home,” where the lyrics go something like, “Welcome home, says the clock,” and the chair says, “Welcome home,” and so do various other pieces of furniture. Groucho started acting out each line, as though he were actually being greeted by the clock, the chair, and the rest of the furniture. He was like a child, charmed by his own ability to respond to the music that way.

There was a bowl of fruit on the dining room table. During a snack, he said, “I never thought eating a nice juicy plum would be the biggest thrill of my life.” Then we talked about the sexual revolution. Groucho asked, “Have you ever laid two ladies together?”

At one point in our conversation, Groucho somehow got into a negative space. He was equally cynical about institutions, such as marriage–“legal quicksand”–and individuals, such as Lyndon Johnson, referred to as “that potato-head.”

Eventually, I asked, “What gives you hope?”

He thought for a moment. Then he just said one word: “People.”

I told him about the sketch I had written for Steve Allen, “Unsung Heroes of Television,” with the man whose job it was on You Bet Your Life to wait for the secret word to be said so that he could drop the duck down, and Groucho told me about one of his favorite contestants on the show. “He was an elderly gentleman with white hair, but quite a chipper fellow. I asked him what he did to retain his sunny disposition. ‘Well, I’ll tell you, Groucho,’ he says, ‘every morning I get up and I make a choice to be happy that day.’” 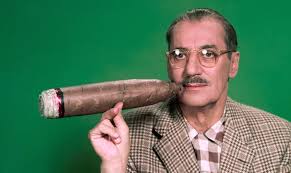 Groucho was holding onto his cigar for a long time, but he never smoked it, he only sniffed it occasionally. “Everybody has their own Laurel and Hardy,” he mused. “A miniature Laurel and Hardy, one on each shoulder. Your little Oliver Hardy bawls you out–he says, ‘Well, this is a fine mess you’ve gotten us into.’ And your little Stan Laurel gets all weepy––Oh, Ollie, I couldn’t help it. I’m sorry, I did the best I could.’”

Later, when Groucho started chuckling to himself, I hesitated to interrupt his reverie, but I had to ask, “What struck you funny?”

“I was thinking about this movie, SKIDDO,” he said. “I mean some of it is just plain ridiculous. This hippie inmate puts a letter he got, which is soaked in LSD, into the water supply of the prison, and suddenly everybody gets completely reformed. There’s a prisoner who says, ‘Oh, gosh, now I don’t have to be a rapist any more!’ But it’s also sophisticated in its own way. I like how Jackie Gleason, the character he plays, accepts the fact that he’s not the biological father of his daughter.”

“Oh, really? That sounds like the ultimate ego loss.”

“But I’m really getting a big kick out of playing somebody named God like a dirty old man. You wanna know why?”

“No, no–it’s because–do you realize that irreverence and reverence are the same thing?”

“If they’re not, then it’s a misuse of your power to make people laugh.” His eyes began to tear. “That’s funny. I’m not even sad.” Then he went to urinate, and when he came back, he said, “You know, everybody is waiting for miracles to happen. But the whole human body is a goddamn miracle.” He recalled Otto Preminger telling him about his own response to taking LSD and then he mimicked Preminger’s accent: “I saw tings, bot I did not zee myself.” Groucho was looking in a mirror on the dining room wall, and he said, “Well, I can see myself, but I still don’t understand what the hell I’m doing here . . .”

A week later, Groucho told me that members of the Hog Farm commune who were extras in the movie had turned him on with marijuana on the set of SKIDDO. “You know,” I said, “my mother once warned me that LSD would lead to pot.”

When Skidoo was released, Tim Leary saw it, and he cheerfully admitted, “I was fooled by Otto Preminger. He’s much hipper than me.”

The last time I saw Groucho was in 1976. He was speaking at the Los Angeles Book Fair. He looked frail and unsmiling, but he was alert and irascible as ever. He took questions from the audience.

“Are you working on a film now?”

“What are your favorite films?”

“Duck Soup. Night at the Opera.”

“What do you think about Richard Nixon?”

“Is humor an important issue in the presidential campaign?”

“Get your finger out of your mouth.”

“What do you dream about?”

“What inspired you to write?”

“A fountain pen. A piece of paper.”

Then I called out a question: “What gives you the most optimism?”

I expected him to say “People” again, but this time he said, “The world.”

There was hardly any standing room left in the auditorium, yet one fellow was sitting on the floor rather than take the aisle seat occupied by a large Groucho Marx doll.

Parts of this article originally appeared in High Times Magazine, Feb 1981
reprinted here at the suggestion and with the kind permission from Paul Krassner in this updated version)

Paul Krassner’s FBI files indicate that after Life Magazine published a favorable profile of him, the FBI sent a poison-pen letter to the editor, complaining: “To classify Krassner as a social rebel is far too cute. He’s a nut, a raving, unconfined nut.”

“The FBI was right,” said George Carlin. “This man is dangerous – and funny; and necessary.”

When People magazine called Krassner “Father of the underground press,” he immediately demanded a paternity test. He had published The Realist magazine from 1958 to 1974. He reincarnated it as a newsletter in 1985. “The taboos may have changed,” he wrote, “but
irreverence is still our only sacred cow.” The final issue was published in Spring 2001.

Krassner’s style of personal journalism constantly blurred the line between observer and participant. He interviewed a doctor who performed abortions when it was illegal, then ran an underground referral service. He covered the antiwar movement, then co-founded the Yippies with Abbie Hoffman and Jerry Rubin. He published material on the psychedelic revolution, then took LSD with Tim Leary, Ram Dass and Ken Kesey.

He edited Lenny Bruce’s autobiography, How to Talk Dirty and Influence People, and with Lenny’s encouragement, became a stand-up performer himself, opening at the Village Gate in New York in 1961. Ten years later – five years after Lenny’s death – Groucho Marx said, “I predict that in time Paul Krassner will wind up as the only live Lenny Bruce.”

Paul Krassner passed away on July 21, 2019. A lot was written about him and you should check a few of the obituaries.

Read his reviews on EatDrinkFilms for the movies Drunk Stoned Brilliant Dead: The Story of the National Lampoon and DYING TO KNOW: Leary, Ram Dass, and Me.

To read articles from Paul Krassner’s magazine check out The Realist Archive.

Listen to an interview with Terry Gross on Fresh Air.

Check out Jenny Hammerton’s “Eat Like the Stars: A Marx Brothers Menu.”

Neatorama on SKIDOO and Groucho.

A Brief History of LSD in the Movies by Dennis Dermody

One thought on “MY ACID TRIP WITH GROUCHO MARX”