It is quite possible that in 1933 René Clair was the best filmmaker in the world. He was on an incredible streak of films—UNDER THE ROOFS OF PARIS (1930), LE MILLION (1931) and his lone remaining jewel in the film critics’ tiara, A NOUS LA LIBERTÉ (1932)—but he would be among the first European directors to emigrate to America, where he would lose his career momentum. 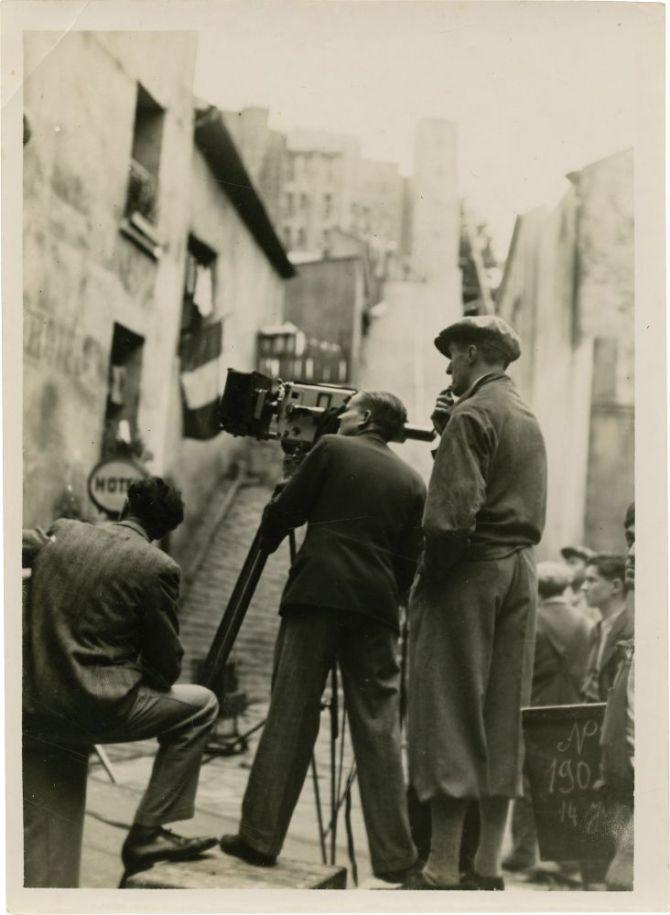 By all rights, 14 JUILLET (aka BASTILLE DAY), his sparkling, anarchic yet superbly choreographed Parisian comedy should be right with A NOUS LA LIBERTÉ in the hearts and minds of film aficionados, but such is not the case—at least not yet. But if Phoebe Green and Don Malcolm have anything at all to say about it, 14 JUILLET’s upcoming screenings in their just-underway The Other Side of the Lost Continent series at the Roxie Theatre in San Francisco (July 11 and—appropriately enough—July 14!) will jump-start the process of rediscovery—and not a moment too soon.

Malcolm and Green occasionally show a little of the battle of wills that runs rampant in Clair’s film between mercurial, hard-headed cabby Georges Rigaud and sharp-witted shopgirl Annabella, who take a delightful set of detours toward romance during the doings in 14 JUILLET.

Their partnership for THE OTHER SIDE series sometimes produces exchanges as engagingly pointed as those that litter the dialogue in Clair’s careening comedy. We kept a respectful distance as they gave us the dish on the dizzying dynamics of Clair’s criminally ignored gem… 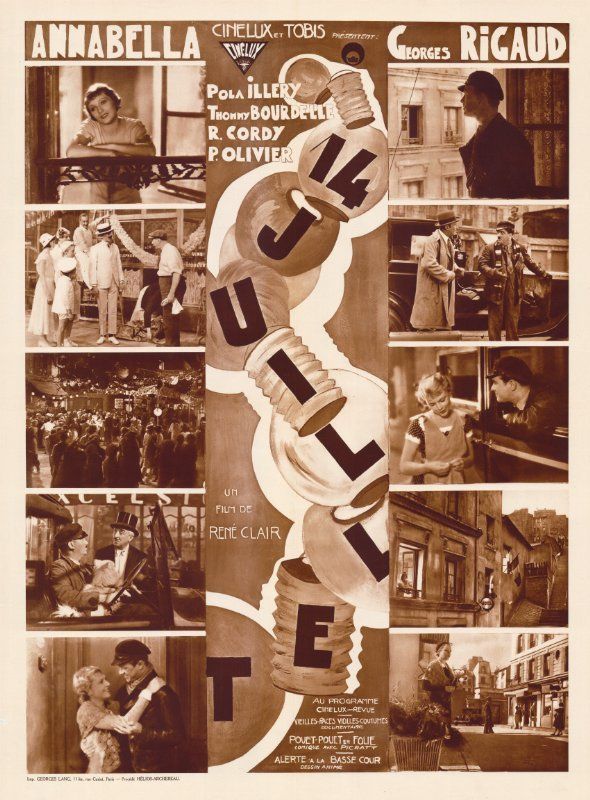 Owen Field: First question—how could this film have gotten lost?

Phoebe Green: It may have been too frothy for the tastemakers, particularly looking back at how the thirties played out.

Don Malcolm: It has no overt social-political commentary, and that may have been the reason why it was set aside.

PG: I wouldn’t say it has no social commentary…

DM: A little rich-poor, perhaps, but the dipso aristocrat is not taken seriously as an exemplar of his class…he’s mostly comic relief.

OF: (quickly) I thought the actor who played the dipso—Paul Ollivier—was just tremendous.

DM: And yet the film does create its own sense of danger.

PG: I was just about to get to that…

OF: I love how the buffoon-like bandits are given a chance to be “good guys” when the dipso loses his wallet, and how it eats them up to have to give it back.

PG: Anyway—the way the main characters here…the boy and the girl we want to see get together, the bad girl [Romanian actress Pola Illery, featured in Clair’s earlier UNDER THE ROOFS OF PARIS] who is still exerting her pull on the boy, and those pesky bandits…the way they are meshed and re-enmeshed in the story is beyond masterful.

DM: It’s the repetitive charm of silent film re-imagined and re-deployed in the context of what is still the early sound era.

PG: That was my line!

OF: And a very good one it was…I was struck by the rhythm of the action in the film, how natural Clair manages to make it and still leave room for extended slapstick sequences, and how he combines these with moments of actual danger. 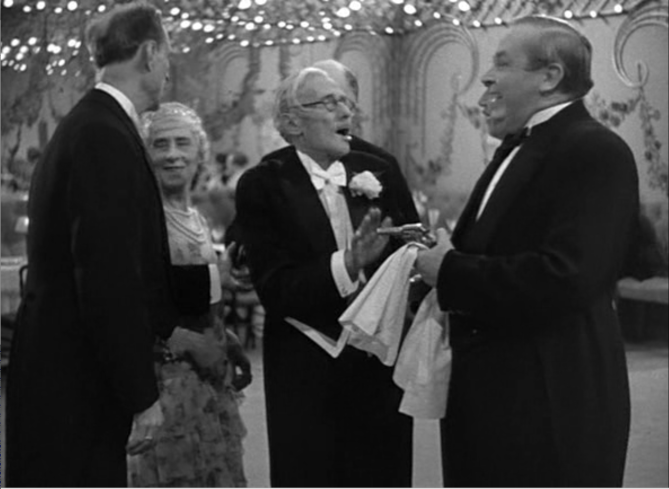 (DM and PG look at one another)

PG: That…is something that we can both agree with you about.

OF: Oh, good! I also love how Clair works the rainstorm into the long scene in front of the bistro, making you forget just how extended the use of the same central set really is. Choreographed anarchy, anyone? 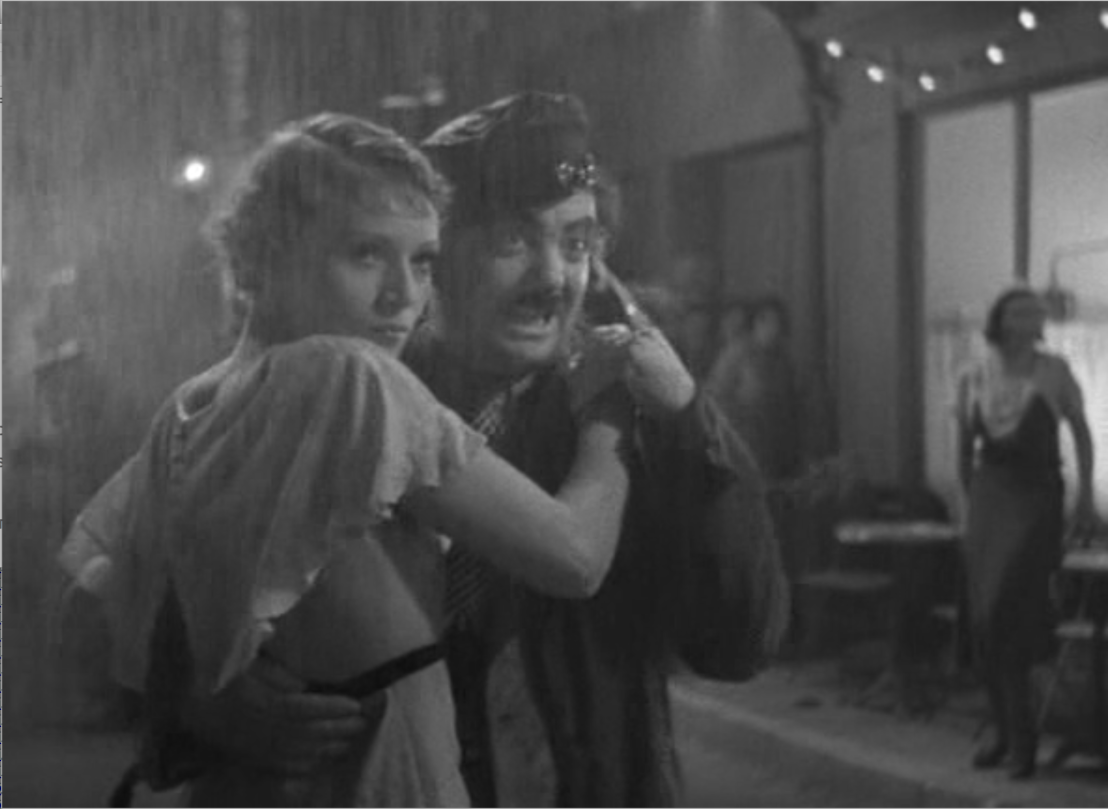 PG: It really should have become what we sometimes call a “filmmaker’s film,” but thirties French comedy was orphaned by Pagnol and poetic realism.

DM: I think the fact that Clair left for America so soon after making this film probably also worked against him.

OF: It’s the type of film that leaves an actual pang in your heart when you use that phrase so often trotted out when seeing an old film—“they don’t make ‘em like that anymore”…

PG: Because that phrase actually applies, and is not a cliché with respect to a film such as this one.

DM: They also don’t make ‘em like you anymore, either, Phoebe!

PG: Believe me when I say that I wish they could say the same about you!

OF: Kids, kids! It’s a great film—a landmark rediscovery. It’s a must-see for vintage film aficionados. And you have time to get your stories aligned for your double feature in October.

PG: We’re working on that!

OF: Great! Too bad René Clair is not here to film that! (laughs, but quickly finds that he’s doing so alone)

Well, folks, don’t let any of the preceding exchange keep you away from the Roxie on Thursday July 11 (6:30pm) or Sunday, July 14 (1:30pm)… because 14 JUILLET is truly a tremendous rediscovery, the type of comedy we desperately need more of in the present day, and a film that arguably can be seen as every bit as great as Clair’s undisputed masterpiece A NOUS LA LIBERTÉ. Seats are limited in the Little Roxie where the two screenings will be held, so don’t delay. Phoebe and Don will be there, and they promise to behave…

To receive timely info about subsequent films in the OTHER SIDE OF THE LOST CONTINENT, join the MidCentury Productions subscriber list.

Read Rene Clair’s Cinema Yesterday and Today, a delightfully coherent vision of the cinema as he surveys his entire career and the whole of film history.

We like books but you can read it as pdf here.

The New York Times obituary for Rene Clair who passed away in 1981.

Entr’acte is a 1924 French short film directed by René Clair, which premiered as an entr’acte for the Ballets Suédois production Relâche at the Théâtre des Champs-Élysées in Paris. Still one of the best-known avant-garde films of the 1920s, Entr’acte was immediately heralded as a “cinematic masterpiece.” It stages a series of zany, disconnected scenes, including a chess match between Marcel Duchamp and Man Ray that is swept away by a jet of water, a dizzying roller coaster course, a hearse pulled by a camel, and a high-speed chase through Paris’s Luna Park. During its first public projection, this silent film was accompanied by an orchestra. The composer, Erik Satie, carefully pegged the music to each filmic sequence, thereby creating what the film’s director, René Clair, would later call “the first composition written for the cinema ‘shot by shot.’”  (note courtesy of MoMA)