All winners in our book.  Hollywood’s elite agree.  And yet the man who directed them all, Stanley Donen never was even nominated for an Oscar.

On the eve of the 2019 Academy Awards we are saddened to learn of his passing but happy that he lived a full 94 years and gave movie audiences many hours of pleasure.  It will be interesting to see how they work Stanley into the Oscar “In Memory” reel.

Donen finally got a statue for a special Oscar in 1998. Presented to him by Martin Scorsese, Donen danced cheek-to-cheek with his Oscar statuette, which he called “this cute little fella.”

Watch the presentation, clip reel and acceptance speech and smile for 8 minutes.

But much earlier San Francisco International Film Festival Director Albert Johnson presented an afternoon long Tribute to him in 1975. In 1980 Johnson interviewed Donen with fashion photographer Richard Avedon after a screening of FUNNY FACE at the Berkeley Art Museum/Pacific Film Archive.

Johnson wrote the program notes stating, “This outstandingly beautiful musical film remains a tribute to the best elements of the genre – it epitomizes lyric entertainment at its most visually stylish, tuneful and romantic, and, in a sense, indicates the need for a return to these elements in contemporary American cinema. The forthright, traditional approach to the musical still works, especially with Fred Astaire in his last great role as lyric hero, and with Audrey Hepburn in her only, very extraordinary appearance as lyric heroine. Another marvel, not to be underestimated on any level, is the major presence of Kay Thompson. This trio of artists perform, together and separately, with dazzling virtuosity, and their triangular paean to Paris, ‘Bonjour, Paris’ (written by Roger Edens) is the classic emotional outburst felt at some point by every American who has ever visited that city’s glittering byways. The music, by Gershwin for the most part, only emphasizes, in the most dulcet way, the mad jazz-patterns of people-of-fashion, slightly amok and in love, not too far from the Ritz.”

FUNNY FACE was one of three very different collaborations between Audrey Hepburn and Stanley Donen.  In her essay about the pair, Michaela Owens wrote, “While FUNNY FACE and CHARADE were illustrations of love at its most sophisticated and wittiest peak, TWO FOR THE ROAD is an angst-ridden portrayal of what could happen after the credits roll and the leading couple rides off into the sunset. It is also, in my opinion, a concentrated effort by Donen to better understand just who Audrey Hepburn was. Although they were close, the filmmaker would admit, “With all her manners, she kept me from getting totally intimate. So I longed to get closer, to get behind whatever was the invisible, but decidedly present, barrier between her and the rest of us mere mortal human beings. … I don’t mean to imply that I thought she was playing a game with me. But she always kept a little part of herself in reserve, which was hers alone, and I couldn’t ever find out what it was, let alone share it with her. 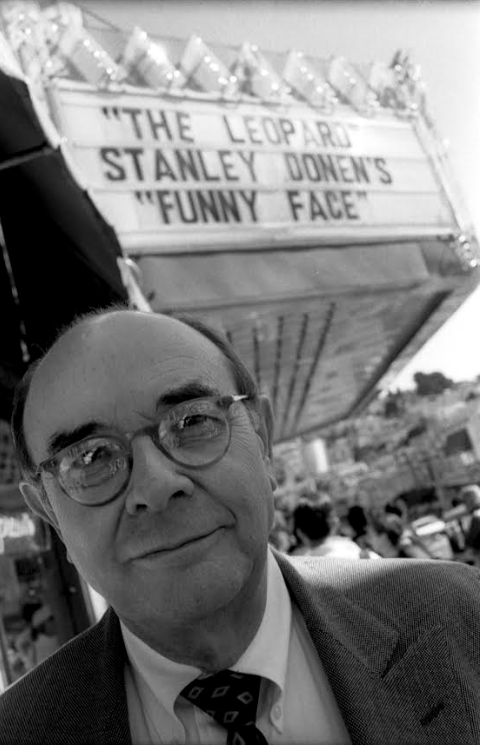 In 1995 The San Francisco International Film Festival brought Mr. Donen back and gave him the Akira Kurosawa Lifetime Achievement Award. Ruthe Stein did this excellent interview with Donen in the San Francisco Chronicle. 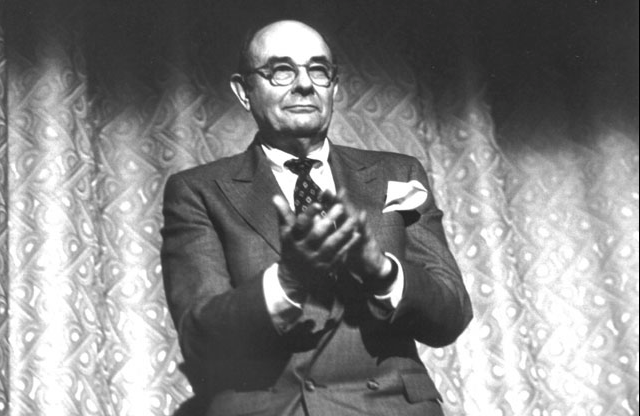 Then Festival director Peter Scarlet remembers “when he came onstage to receive the award he said, “Who would imagine that a dancing Jew from South Carolina would get something like this?”

In September, 1975, MGM publicist Walt Von Hauffe and I cooked up a plan to fill an open week  or two between first run blockbusters at the Coronet Theater in San Francisco with a revival of SINGIN’ IN THE RAIN. MGM agreed to make a new 35mm print for us. With Walt’s showmanship such as hiring three tap dancers, dressed  in short yellow raincoats and carrying umbrellas emblazoned with the title of the film.  They sang and danced to the title song of the film at various spots around the city, including the cable car turntable where a large number of people had congregated during the lunch hour break. It got media attention including rave reviews, rare for a revival, from all the newspapers. And the audiences showed up in big numbers to the surprise of most people in the film business. 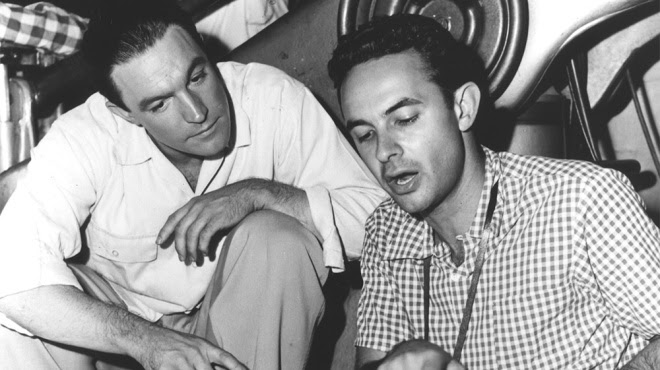 A few weeks later there was an old-fashioned Hollywood sneak preview of Donen’s LUCKY LADY at the Coronet. The film, written by Marin locals Gloria Katz and Willard Huyck, was shown in an early cut on what is called double system where the sound and film are shown on separate projectors. This was a big deal “sneak” with studio heads, technicians and stars in attendance.

Midway through there were technical problems and the movie was shut down. After a several minutes word came down that this might take awhile to fix. Should they cancel the rest of the show?

“No, “said Donen. “We’ll tell the audience what is happening.” And he proved to be a showman. I remember the director coming out to explain and asking if the audience would like to hear about the making of the film and then he brought Liza Minnelli and Gene Hackman to the stage and they told very funny, insightful tales of antics of the movie’s set.

If only I could remember them.

The audience was entertained by their stories and in love with this team.  Unfortunately it didn’t make the reception of the movie any better.

The film’s large budget of $10 million had more than doubled to $22 million (like $200 million in today’s dollars) and the film was in production nearly 250 days.  It was later reported that “Donen’s company encountered numerous problems shooting so much of the film on the water, particularly its massive full-scale sea battle climax between dozens of amateur rum-running vessels and the better-armored gangsters’ ships, a veritable small navy. It’s all done full-scale and, arguably, the largest such battle sequence of its type ever filmed without extensive use of miniatures or CGI. The rest of the picture is no less lavish; sets and costumes and extensively redressed real locations impress throughout.”*

Before its Christmas, 1975 release LUCKY LADY had gone through several different endings but none saved it from being a disappointment. You can read about the process here and see the “sad” ending shown at the SF sneak.

Even the greats make mistakes and sadly the last several theatrical films of Donen were failures.

His very last movie, the TV film LOVE LETTERS based on A.R. Gurney’s stage play was modest and lovely with terrific performances by Laura Linney and Steven Weber. A fine finale on film though he did return to the stage in 2002 directing Elaine May‘s musical play ADULT ENTERTAINMENT starring Danny Aiello and Jeannie Berlin in Stamford, Connecticut.

We have so much to remember that has brought the world great joy.

About those wonderful collaborations with Fred Astaire he told TCM host Robert Osborne,  “It was intimidating to be working with a man you thought was the single greatest contributor to musical films. But it was wonderful… Of all the people on earth Fred Astaire seems to be the least affected by gravity.”

How did Fred dance on the ceiling? Find out.

And in 1986 he directed the Lionel Ritchie hit homage “Dancing on the Ceiling.”

Married five times, Donen once had a cushion in his living room embroidered with the words “Eat, drink and remarry.” Before his first marriage he dated the like Judy Holiday and between them he and Elizabeth Taylor spent time together.

In his final years Donen’s longtime companion was writer and director Elaine May, who he dated from 1999 until his death. From a lunch interview John Heilpern of Vanity Fair wrote,

“Stanley Donen has been married to beautiful women five times. I mentioned that his sister once said of him, ‘Stanley’s problem is he keeps thinking that romances will turn out like they do in the movies.’

‘That’s absolutely right,’ he responded. ‘In the movies, they always lived happily ever after.’

Nowadays he’s been happily unmarried to Elaine May for 12 years. ‘Have you asked her to marry you?’ I wondered.

He adores her. She gave him a silver medallion he wears round his neck. It’s inscribed, STANLEY DONEN. IF FOUND, PLEASE RETURN TO ELAINE MAY.”

Thank you Mr. Donen all the pleasure you brought to the world.

Some Tributes and clips

Todd McCarthy wrote in The Hollywood Reporter: “As the industry’s mainstays were starting to show their age, Donen arrived and reinvigorated the big-screen musical with his energy, imagination and discipline”

Tad Friend wrote in The New Yorker in 2003,“For a time, Donen epitomized Hollywood style…he made the world of champagne fountains and pillbox hats look enchanting, which is much harder than it sounds.”

The Guardian: “Everyone talks about Orson Welles making his dazzling movie directing debut at 25 years old; but really we should also be talking about Stanley Donen doing the same thing: co-directing the musical On the Town in 1949 at the same age with Gene Kelly. And when they together made SINGIN’ IN THE RAIN  – and film history – Donen was still only 28.”

The New York Times: “Mr. Donen worked with some of the most illustrious figures of his era: from Astaire and Kelly to Cary Grant and Audrey Hepburn. He also worked with Leonard Bernstein, the lyricist Alan Jay Lerner and the writing team of Comden and Green, not to mention Frank Sinatra and Elizabeth Taylor.”

MOVIE MOVIE didn’t really work as a spoof of an evening at a double feature but this trailer from the show is great fun.

BEDAZZLED wasn’t an immediate success but became a cult classic and still makes audiences laugh and quote many lines from it. “Juulieee Andrews.”

LA Times: “In ‘Dancing on the Ceiling: Stanley Donen and His Movies,’ Stephen M. Silverman’s 1996 biography, Donen said that neither he nor Kelly ‘knew it was going to be such a great number’.”

‘It only took a day and a half to shoot,” he recalled. ‘We covered the entire East Side Street on [MGM’s] Lot Two with a black tarpaulin [to simulate nighttime] and designed, to the music, the puddles in the pavement for where Gene would splash around. The rehearsal took place without the rain, which was piped in with sprinklers. We had to finish at a certain time of day because of a water-pressure problem in Culver City.’

Indeed, as Donen explained on another occasion, ‘The only problem came when the downpour suddenly turned into a drizzle in the late afternoon. It was because Culver City people were watering their lawns’.”

A 2016 interview at the Ghent Film Festival.

Here is where you can and cannot watch Donen movies online. The NY Times has some ideas too.

A detailed biography is on Wikipedia.