Laurel & Hardy are back.

They hadn’t entirely gone away – the Niles Essanay Silent Film Museum has devoted a monthly Sunday matinee to Stan & Ollie for quite a few years now. Film festivals from New York City to Pordenone to Kobe celebrate the comedy team. Laurel & Hardy recently received their due in a program presented by the San Francisco Silent Film Festival last December.

That said, after the 1950’s and early 1960’s, when Laurel & Hardy’s short subjects were on TV every day, and such retrospectives as Laurel & Hardy’s Laughing 20’s (Robert Youngson’s compilation of the team’s silent era films) were shown in movie theaters, they did go away, leaving the pop culture zeitgeist without a trace for quite awhile. With the exception of occasional appearances on Turner Classic Movies, Laurel & Hardy, the cinema’s greatest and most internationally popular comedy team have been off television entirely for 25 years, unseen since an American Movie Classics run on Sunday mornings in the early 1990’s. 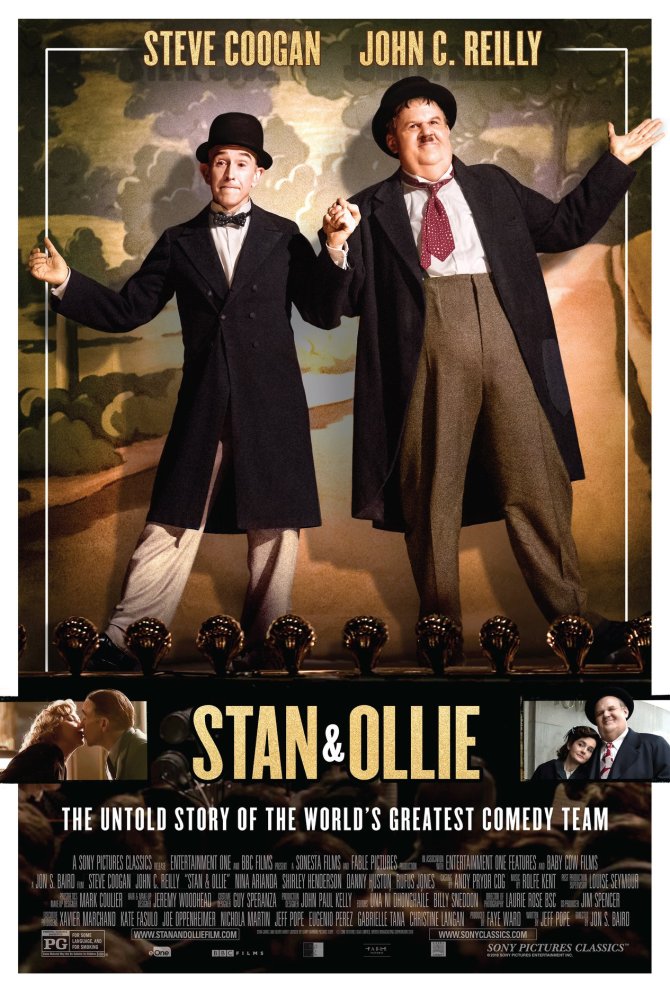 That state of affairs is changing. Turner Classic Movies spotlighted the beloved comedy team in early January, 2019. A new movie, STAN & OLLIE, starring John Reilly and Steve Coogan as Stan Laurel & Oliver Hardy in the last years of their career making their final live stage tour, is getting a theatrical run after its world premiere at the 62nd annual London Film Festival. Reviews from Leonard Maltin, Will Friedwald and both stalwart classics film writers  and general press film critics have been very positive. The team’s last film, ATOLL K (released in the US as UTOPIA), is now out on a new Blu-ray and restoration from BFI (get it if you have a region-free player).

The Alamo Drafthouse is bringing the team back to movie screens in 2019 with “Laurel & Hardy’s Festival of Laffs,” a program of new restorations of their early 1930’s comedy short subjects.

It is fitting that Laurel & Hardy receive a respectful spotlight on EatDrinkFilms because, after all, Stan actually did visit Ollie in COUNTY HOSPITAL (1932) bearing ”hard boiled eggs and nuts” for his injured pal. They played waiters at a fancy soirée in FROM SOUP TO NUTS (1928) and got devastatingly drunk in public on cold tea they thought was bootleg booze in BLOTTO (1930). In THE BATTLE OF THE CENTURY (1927) we are treated to the greatest pie fight ever filmed. There are many more. And, after all, it was a kitchen accident suffered by Mr. Hardy that led directly to their teaming.

So let’s take it from the top. Who were Laurel & Hardy?

Born Arthur Stanley Jefferson on June 16, 1890, Stan Laurel was the son of an actor and theater manager. Stan made his show business debut at Pickard’s Museum, Glasgow in 1906, and would later be part of the celebrated Fred Karno theatrical troupe, kings of the music halls known as Fred Karno’s Army. At one point, Stan was the understudy of Charlie Chaplin. After the Karno tours to America in 1910 and 1913, Laurel traveled the vaudeville circuit with his first wife, Mae Dahlberg, and starred in comedy short subjects as early as 1917, headlining films for Bernstein Productions, the Hal Roach Studio, Gilbert M. Anderson (a.k.a. Broncho Billy) and Joe Rock Productions. The characters he plays in these 1917-1924 comedy shorts – at times rather aggressive, at other times meek – are far afield from the extremely dunderheaded yet good-hearted and well-meaning “Stanley” from the Laurel & Hardy films. Most successful were a series of movie parodies, the best being DR. PYCKLE & MR. PRIDE (1925), a very funny short in which an uber-dastardly Mr. Hyde wreaks a reign of terror with deeds which are definitely not dastardly. After completing HALF A MAN (1925), the last of the Joe Rock Productions starring series, Stan switched to a behind-the-camera role, writing and directing films in his second stint with the Hal Roach Studio in 1926. He would continue as a writer-director-gagman (credited or uncredited) through the team’s 14 years making movies for Hal Roach and even gets “A Stan Laurel Production” credit on their features, OUR RELATIONS (1936) and WAY OUT WEST (1937). After Laurel and Hardy signed with Fox, Stan would be treated more as a contract player than comedy creator, much as Buster Keaton was at MGM – and much to his chagrin. Stan Laurel was a fellow who enjoyed the craft of molding comedy for movies, in the editing room and behind the camera.

Mr. Hardy, born Oliver Norvell Hardy on January 18, 1892, was headed for a military career but, quite fortuitously, got sidetracked when he managed and was projectionist at the Palace Theatre in Milledgeville, Georgia and became fascinated by the movies he was showing. Having determined he could do just as well in the “flickers” as the actors he was seeing onscreen, Hardy’s next stop was Jacksonville, Florida, where he was given the nickname of “Babe” and made his name appearing in dozens of movies as stock player with the Lubin film company in 1916-1917. After relocating to New York briefly to work for the Pathé, Casino, and Edison Studios, Hardy returned to Jacksonville to take a job with Vim Comedies and co-star in the “Plump & Runt” series with Billy Ruge. He would subsequently relocate to Hollywood and work as a most prolific supporting player in the comedy short subjects of Charlie Chaplin imitator Billy West, and then, at Vitagraph Pictures, in the films of over-the-top Jimmy Aubrey and the wacky, most cartoony slapstick comic Larry Semon (with whom Stan Laurel also worked with a bit earlier, in 1918). Hardy co-starred in both short subjects and features with Semon, the comedian-director-gagman and former cartoonist who resembled an unholy spawn of Max Schreck as Nosferatu, Richard Outcault’s 1890’s comic strip star The Yellow Kid and Bill Griffith’s comics character of many decades later, Zippy The Pinhead. Often portraying menacing “Eric Campbell” style heavies, Hardy would appear as a robber in one of the Broncho Billy Anderson produced comedies starring Stan Laurel, LUCKY DOG (1921). Offscreen, he enjoyed golf and the race track.

How do they differ from other comedy teams?

What differentiates the skinny Englishman and the chubby American from other teams, such as the Three Stooges, the Marx Brothers, the Ritz Brothers, Clark & McCullough, Olsen & Johnson and (later) Abbott & Costello, Hope & Crosby and Martin & Lewis is that they genuinely care about each other. There is a bond, a warmth and an affection between the two, however extreme the slapstick calamities caused by their own incompetence get. The best example of this is the opening of their 1938 feature BLOCKHEADS, in which Ollie visits Stan at the home for disabled World War I soldiers. Ollie is shocked to find that his pal appears to have lost a leg and offers to take Stan home. A bit of a tragicomedy ensues, as Ollie’s consideration and love for Stan, punctuated by his chum’s utter cluelessness, ruins his life! At one point he carries Stan in his arms. Little does Ollie know, Stan merely bent his leg in a way that concealed it and can walk just fine – but enjoys being carried! This is a sequence we can’t imagine with ANY of the other aforementioned comedy teams–just L&H. 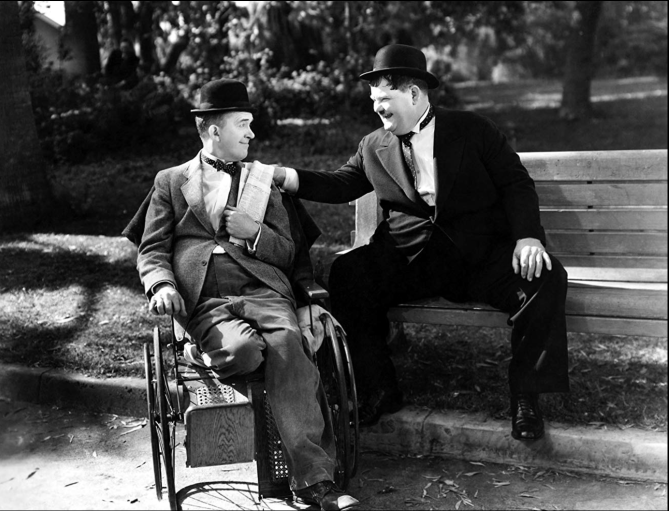 Another area where they differ from the rest is in how the team specifically practices the art of the gag. In Laurel & Hardy comedies, often the big laughs arrive right before and right after the punchline. In their early 1930’s films as HOG WILD, HELPMATES, TOWED IN A HOLE and BUSY BODIES, calamitous destruction, frequently caused by Stanley’s good-hearted but inept efforts to “help,” is invariably followed by Oliver Hardy looking directly at the camera prior in utter frustration and resignation.

Some of this subtle approach, in which the slapstick indignity is not nearly as important as the reaction to it, can be seen in the 1920’s films of innovative silent movie comedians Lloyd Hamilton and Harry Langdon, but Laurel & Hardy take the mastery of a gag, preceded by anticipation of disaster and followed by a hilarious reaction, to new heights.

Why see the new restorations of L&H films?

First and foremost, humanity now watches films on their smart phones, stupid phones, tablets or a TV in 2019, making the actual experience of seeing a movie with an audience more and more rare for those who don’t hit the film festival circuit. There is nothing that can compare to seeing a capacity crowd laugh their heads off to a classic comedy–and this remains the prime motivation for archivists, collectors and historians to present these films in the first place. Their popularity has always been international. They would first film them in English, and then refilm the same scene in French, Spanish, German and Italian, using phonetic words written on a blackboard, just off camera. 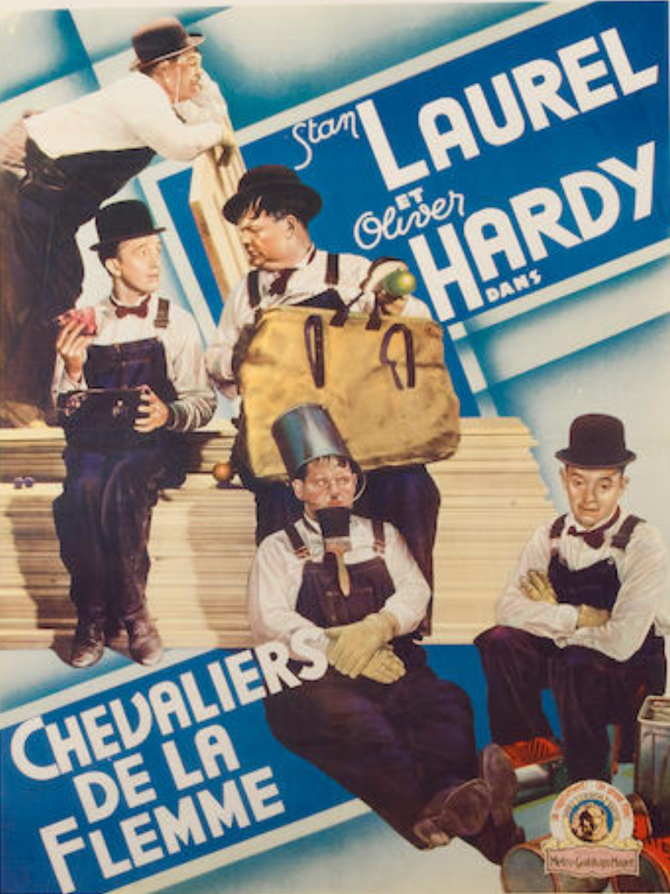 The second reason is that the restorations of the L&H classics BUSY BODIES, COME CLEAN, HELPMATES and the 1932 Oscar winner for best short subject, THE MUSIC BOX, look great.

“Laurel & Hardy’s Festival of Laffs” will be hitting the road playing at Alamo Drafthouse Cinemas and other theaters in January and February, perfect timing to see them along with the new STAN & OLLIE.

The Boys are back, and will continue to rock audiences as long as their films can be shared with a group that’s ready to laugh, preferably in a theatrical setting.

For more video clips of the restorations and other fun clips check out EAT MY SHORTS.

For more info on the team enjoy the resources below.

Page through and see sample pages.

Listen to an interview with Randy Skretvedt on WFDU.
Laurel or Hardy: The Solo Films of Stan Laurel and Oliver “Babe” Hardy by Rob Stone

The Films Of Laurel & Hardy by William K. Everson

Another Nice Mess: The Films of Laurel & Hardy (while this website will request a donation, it is absolutely a motherlode of material on L&H and the Hal Roach Studio)

The STAN & OLLIE website offers a page with many resources, photos and video clips of their work.

An interview with Jeff Joseph about his restoration and release project for the Laurel & Hardy films.

Leonard Maltin on the restorations

Steve Coogan and John C Reilly on transforming into Laurel and Hardy: “Figuring out who they were is the hard work” Paul F. Etcheverry is a writer and film historian who has programmed classic comedy and animation retrospectives since 1981. He is the co-founder, along with Bob Ekman and Robert Emmett, of the KFJC Psychotronix Film Festival. His musings on various aspects of 20th century pop culture can be found at psychotronicpaul.blogspot.com. Paul resides in Kingston, New York with his partner, writer Annie Berrol, and tres gatos.

One thought on “THE BOYS ARE BACK IN TOWN”